Self-rising flour is common in many southern baking recipes and is great for bringing lightness to biscuits, waffles, cobblers, pancakes and quick breads. Self-rising flour can also be used in some cake and cupcake recipes.

A self-rising flour should not be used in place of all-purpose flour or in yeast breads, instead, you should only use self-rising flour when the recipe actually calls for it otherwise you may not get the outcome you were expecting, and it may be a costly, even if still edible, mistake!

Self-rising flour was actually created in the 1800s by an English baker who wanted to sell it to the Navy so that they could make fresher baked goods for sailors. It did take a while for his product to catch on, but eventually he was successful, and he later patented his self-rising flour in the US in 1849.

The Job of The Leavening Agent in Self-Rising Flour

The baking powder in self-rising flour is a chemical leavening agent, which means it helps baked goods rise by producing air or gas. A leavening agent also gives the fluffy and porous texture seen in most baked goods.

Now the baking powder is activated, it becomes active and releases carbon dioxide which helps the baked goods rise.

Single action baking powder does not need to be heated for this activation reaction to take place.

If using single action baking powder, your dough or batter needs to go straight into the oven once mixed as otherwise the carbon dioxide will have time to escape, which means that your mix will not rise in the oven.

Double action baking powder contains cream of tartar and another acid salt which reacts with the sodium bicarbonate at a different temperature. This means there will be a first rise straight away, but the most rise will then occur at a higher temperature – while the mix is in the oven. The good news from this is that the time between finishing your mix and placing it in the oven is not as critical.

Luckily, most store bought baking powders are double action, which means you can take your time with your recipe and it should still rise well in the oven.

Store bought baking powder also contains a neutral starch such as cornstarch to absorb any moisture in the mix to prevent it from being activated in the container. It is important to check the ‘use by’ date on baking powder before using, as there is a chance that it will not activate properly after this date.

Instead of baking powder, some recipes use baking soda as the leavening agent along with ingredients such as citrus juice, buttermilk or soured cream. When the baking soda, acidic ingredient and the liquid mix is heated, this will cause carbon dioxide to be released so that the mix can rise.

If you make your own self-rising flour for a recipe that also requires baking soda, then the baking soda should still be added.

Another important leavening agent is yeast; which is why self-rising flour is usually avoided in yeast breads.

Unless you want to bake a lot with self-rising then there is often little point in buying it; instead, take a look at our easy self-rising substitutes below. 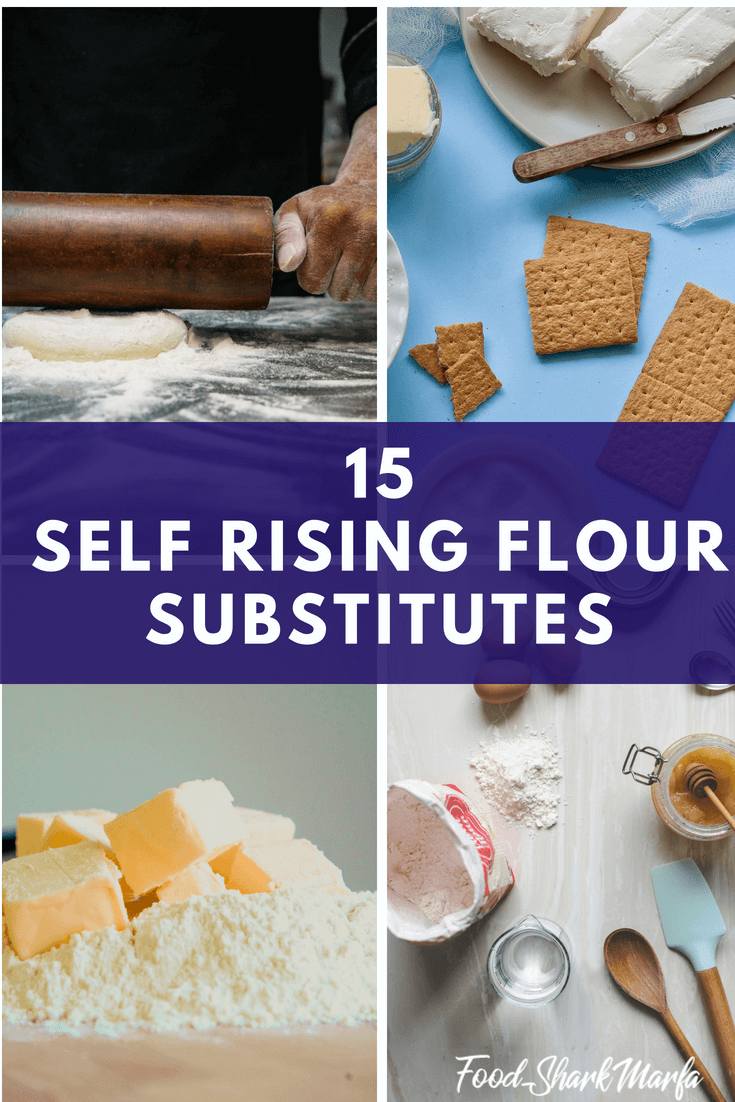 The general ratio for making your own self-rising flour is one cup of all-purpose flour with one and a half teaspoons of baking powder and a quarter teaspoon of fine salt. This should all be added to a bowl and mixed well before using.

If you are following a British recipe, note that self-rising (or self-raising) flour does not contain salt, so you may need to adjust the salt quantity in the recipe to prevent the finished goods from being over-salted.

Both this blend and the all-purpose blend should replace the exact amount of self-rising flour that the recipe calls for.

Using an all-purpose flour blend will actually add a slightly higher protein content to your baked goods as commercial self-rising flour is usually milled from soft wheat with a lower protein content.

Using all-purpose with baking powder and salt will not affect the taste of your baked goods but they may be slightly less tender than if baked with store-bought self-rising flour.

Although white flour does have some nutrients such as calcium and some B vitamins added to it after processing, its nutritional profile is still lower value than whole wheat flour.

As well as containing more fiber, whole wheat flour also contains more B vitamins, folate and riboflavin. It is also richer in protein, iron and calcium compared to white flour.

As with all-purpose flour, you can make a whole wheat self-rising substitute by adding one and a half teaspoons of baking powder and a quarter teaspoon of fine salt to one cup of whole wheat flour.

This blend is ideal for heavier baked goods such as muffins, but the heavier density of whole wheat will not suit lighter cakes or pastries.

Another whole grain option, oats are higher in fiber and protein and lower in carbs compared to wheat flours. You can buy ready ground oat flour, or pulse dried oats until they are a fine powder. Oat flour is suitable for sweet or savory baked goods as it has a subtle flavor and is also naturally gluten free. It also tends to give a nice fluffy texture to the goods.

Cakes baked with oat flour will not rise as well as those baked with a wheat flour because of the lack of gluten, so you need to add more baking powder to improve its rise.

One cup of oat flour with two and a half teaspoons of baking powder should give a satisfactory rise. If you are not happy with the rise, or even the finished goods, then be prepared to increase the baking powder slightly next time, or even adjust the liquid content to compensate for the lack of gluten that helps bind the mix together.

Flours such as rice flour, coconut flour, quinoa, nuts or bean flours can be used alongside a leavening agent as a substitute for self-rising flour. However, these types of flours can behave differently when baking with them and some flours may need blending with other flours such as wheat flour to give satisfactory baked goods.

You can also make a basic home baking powder leavening mix to go alongside these flours by adding one gram of baking soda to 1.5 grams of cream of tartar. This mix equals 5 grams, or one teaspoon of baking powder.

So, if you needed two cups of self-rising flour, you would need to mix two cups of all-purpose (or other 1:1 flour) with 1.5 grams of baking powder with 2.25 grams of cream of tartar, plus half a teaspoon of fine salt.

It is important to measure out these small quantities accurately, which can be difficult with normal kitchen scales, as otherwise, the flour mix will not rise properly.

There are other ways to make home leavening agents, such as with baking soda and buttermilk, or baking soda and vinegar, citrus juice or honey, but these can get complicated, and because they also use liquids, you will often need to adjust liquid volumes in the recipe to compensate.

Unless you have time to spend refining recipes, you are probably best avoiding mixing up your own leavening agents, and instead, stick to using store bought baking powder and fine salt alongside all-purpose flour, whole wheat or oat flour.
5/5 - (17 votes)

Based in upstate New York, Madison is a devoted foodie and spends some of her time developing new recipes for cookbooks and the remainder of her time hunting out specialty ingredients from far and wide. She also holds a bachelor’s degree in nutrition and has a particular interest in antioxidants in foods and how these can help contribute to our health and wellbeing.

Based in upstate New York, Madison is a devoted foodie and spends some of her time developing new re...