Finding that you have no cream of tartar to hand when you need to whip up a lemon meringue or a batch of snickerdoodles, then do not panic, there are other options!

Potassium acid tartrate became popular when a British chemist combined it with baking soda to make an early form of baking powder in the 1840s!

Cream of Tartar is Generally Recognized As Safe by the FDA when used as a food substance and when you are looking for it at the grocery store, it is usually found in the spice aisle as it is spice companies that are the main processers of cream of tartar.

When cream of tartar is stored in a cool dark place, and kept dry, it will be effective indefinitely. If it has started to cake, then you can just use a mixer or stick blender to break it up again.

What Cream of Tartar Does in Recipes

There are four main roles for cream of tartar when used in cooking.

The substitute used will very much depend on the type of recipe. The main substitutes are acids such as lemon juice and white vinegar or dairy acids including white yogurt and buttermilk.

If the recipe needs cream of tartar as a leavening (rising) agent, then baking powder is always the best substitute. Below are these substitutes in more detail, and we have grouped them under types of recipes for easy reference. 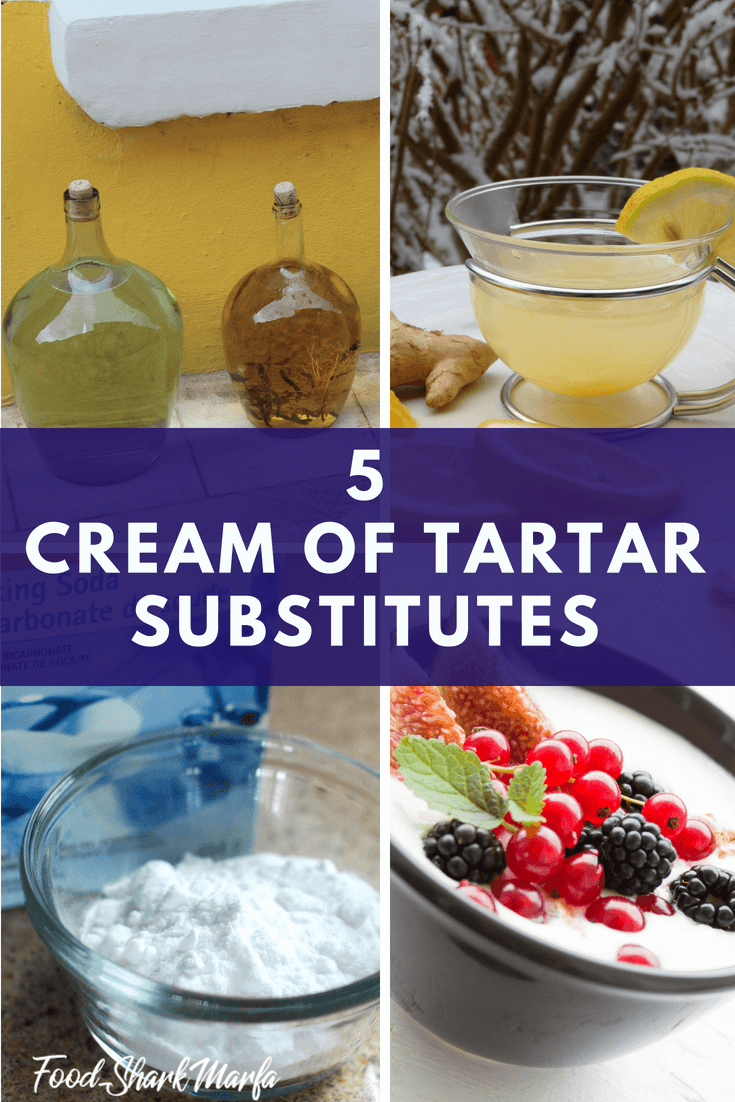 As with any substitute the taste can be altered, which is why lemon juice is always the best acid to substitute cream of tartar in meringues that have a fruit base while white vinegar can be substituted in recipes that just need whipped egg whites - although vinegar can alter the flavor more than lemon juice as it is stronger tasting.

For egg whites, this will mean around a quarter to one half of a teaspoon of vinegar or lemon juice for each egg white used. If you start to use larger volumes of liquid acids, then liquids in the recipe will need adjusting to take account of the extra liquid, which means it is always better to keep any liquids added to a minimum.

Cream of tartar can also be omitted from egg whites or meringues, but you will need to compensate by ensuring that your whites are extra well beaten so that they form stiff peaks before baking in the oven.

If you are using baking powder, do check that it is still within its ‘use by’ date otherwise there is a risk that it will not work properly. You can easily test your baking powder by adding a teaspoon to hot water. If it starts fizzing and bubbling, then it is fine to use.

Substituting with baking powder will not alter the recipe in any way.

Depending on what you are baking, there is a risk that if white vinegar is used, you can end up with a cake with a rougher texture, that is also coarser grained and more prone to shrinking. There is also a higher risk of vinegar altering the taste more than if using lemon juice

Buttermilk is what remains when butter has been churned from cream. As buttermilk is acidic is can act as a cream of tartar substitute.

White yogurt is another acidic dairy product which can be used to substitute cream of tartar in baked goods. When using yogurt, it should be thinned out with milk until it reaches the thinner consistency of buttermilk.

If you use buttermilk or white yogurt, you will need to make some liquid adjustments to the recipe. For every quarter teaspoon of cream of tartar needed, a half cup of liquid must be removed from the recipe and replaced with half a cup of thinned yogurt or buttermilk.

3. For Icings and Frostings

Some royal icing recipes use cream of tartar to help give volume to the icing. It also helps keep the whiteness of the icing.

Depending on the recipe, you may be able to omit the cream of tartar, but the icing will usually need extra beating to get it to the right consistency.

Cream of tartar can be omitted when making whipped creams. You will need to beat the cream well though to get the best consistency before using.

Crystallization is common when making syrups. This is because enough of the sugar crystals have stuck together to become insoluble in water. If you make syrups, you will also know that once a few sugar crystals start to stick to the side of the pan, the full syrup will soon crystalize, especially if it is a ‘rich syrup’, two cups of sugar to one cup of water (2:1) ratio. This is because crystallization is actually a chain reaction.

Depending on the syrup, it may be possible to omit the cream of tartar or acid substitute and instead, leave the syrup simmering for up to ten minutes, instead of just bringing it to the boil then turning down.

If a recipe only needs an eighth of a teaspoon of cream of tartar, this is the equivalent of three to four drops of lemon juice.

If your syrup does begin to crystalize over time, then heat it up and stir well. This should re-absorb the crystals into the syrup.

To prevent color leaching when boiling red cabbage or other vegetables, just add a tablespoon of lemon juice, white vinegar or even wine for every cup of liquid in the pan.

As with any substitutes, which one you use for cream of tartar will always depend on what you are making or baking.

Where cream of tartar is acting as a leavening agent (usually alongside baking soda), baking powder is the best substitute.

However in other recipes, acidic alternatives such as lemon juice, white vinegar, white yogurt or even buttermilk will suffice if the recipe does require an alternative, as in some cases, a lack of substitute may be the best substitute!

2 thoughts on “Cream of Tartar Substitutes for Meringues, Cookies, Frostings and More”