With its rich Mediterranean flavors, a bowl of nutritious gazpacho soup is perfect not just in the summer, but all year round. Because gazpacho is best made in summer when the tomatoes and other raw ingredients are full of flavor, freezing gazpacho is the only way that you will be able to enjoy it at other times of the year.

So, yes, you can freeze gazpacho soup for a taste of summer year round. A smooth gazpacho will freeze and thaw very well and keep its freshness, but chunkier versions will lose some texture with the freezing and thawing process.

To help you freeze your gazpacho easily, in this post I discuss what you will need to do to prepare it for freezing, how best to thaw it and of course, a host of various other gazpacho-related matters! 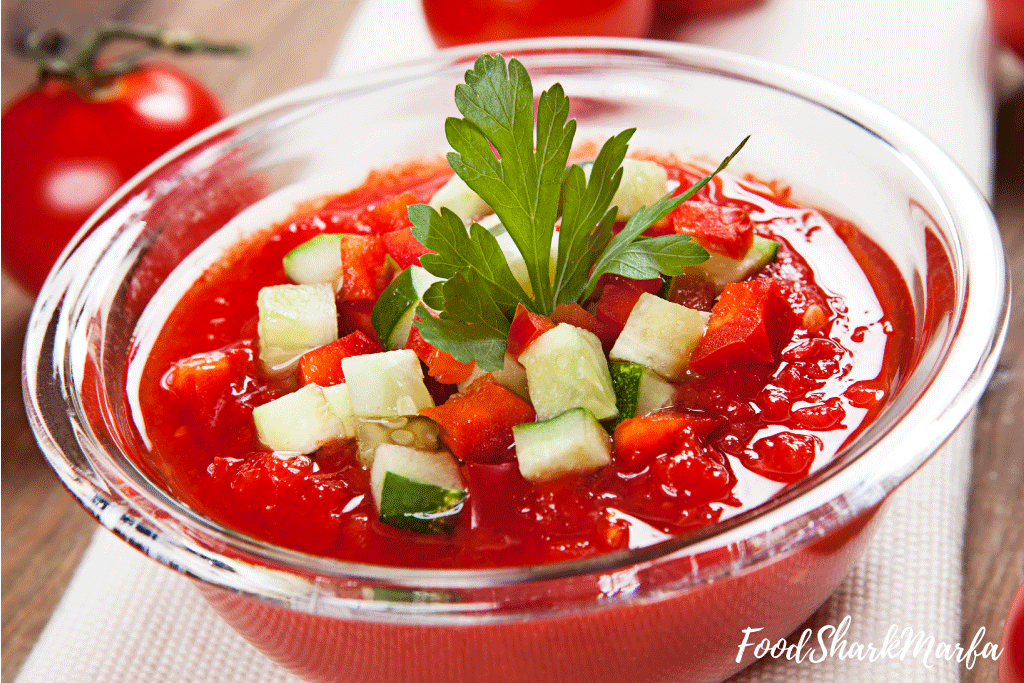 Just Exactly What is Gazpacho Soup?

Gazpacho is a traditionally a raw tomato-based soup usually served cold, although it may be served hot in some parts of Spain.

Gazpacho can be served as it is for a snack, a starter or even as a side dish. It can also be enjoyed alongside tapas. You can add some hardboiled egg, shrimp, salmon or tuna to it for extra protein, or add a handful of nuts or toasted seeds for some extra nutrition and crunch. A sliced avocado, few chunks of feta or a drizzle of sour cream or even nut cream sauce will also make a tasty garnish.

It is also versatile, you can add some hot peppers, fine chopped onions and garlic to turn it into a salsa, or even add rice and beans to it in the crockpot for a rich stew.

The actual origins of this summer favorite are unclear. It may have been the Romans that introduced gazpacho soup, while others say it was the Moors or Arabs. It also has Greek influences. Wherever it did come from, it is usually associated with Andalusia, an autonomous community of Spain.

Even before tomatoes were available in Spain, stale bread, olive oil and garlic were consumed as a soup and in the Andalusia region, workers were given bread and olive oil for their food ration.

Andalusia became home to Moors from Morocco and Ottomans in the eight century and these settlers already had a similar soup called ajoblanco (literally meaning ‘white garlic’) which was made with bread, olive oil, garlic, almonds and sometimes grapes. 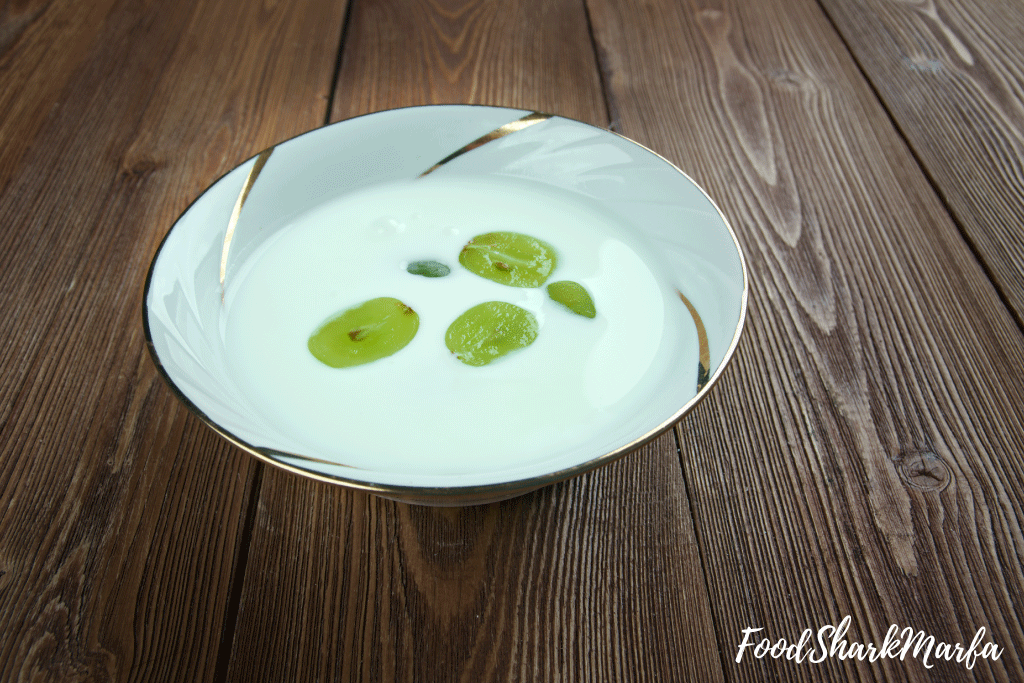 There is a good chance that Christopher Columbus took ajoblanco on his travels across the globe and when he returned from the New World with new crops such as tomatoes and cucumbers, these were then added to the soup, allowing it to evolve into the modern gazpacho.

Even today, the Andalusian version of gazpacho is still made with olive oil and bread, along with tomatoes, peppers, onions, cucumbers, garlic and a splash of sherry vinegar.

When Empress Eugenia de Montijo married Napoleon III in 1853, she insisted on having gazpacho served at the wedding and it was probably this event that allowed people outside of Spain to taste gazpacho for the first time.

Nowadays, the name gazpacho is often be applied to any cold soup with a vegetable or fruit base, as well as the traditional Mediterranean gazpachos.

The tomato gazpacho is the most popular variety in the Seville area as well as outside of Spain. This is often seasoned with cumin and it is a chunky gazpacho, with vegetables diced into the soup, or served on top.

Salmorejo is popular around the Cordoba area of Spain and this is a very smooth and rich gazpacho made with tomatoes, olive oil, bread and vinegar. It is often served with diced hard boiled eggs and serrano ham. As salmorejo is a thicker soup, it can be served in a shared bowl along with other tapas or even eggplant fritters. 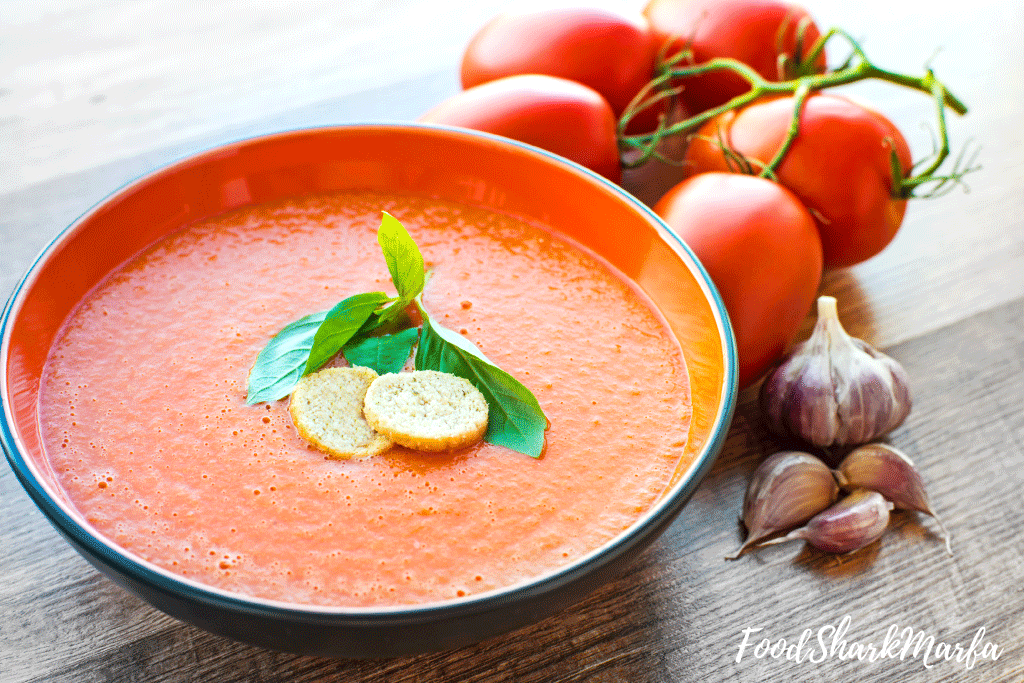 The ajoblanco or ‘white’ gazpacho is still available in Malaga and surrounding areas and this is traditionally served with grapes. There are other types of gazpacho, including green gazpacho which, yes, you’ve guessed right, is made with mostly green ingredients.

Gazpacho is also celebrated in Spain with the saying ‘De gazpacho no hay empacho’ or ‘You can never get too much of a good thing!’

Tips for Making A Great Gazpacho!

When making traditional gazpacho, you may want to buy raw ingredients from the local farmers market rather than the grocery store. Unfortunately, the generic tomatoes available at grocery stores often lack the richness of flavor and sweetness needed in gazpacho.

When choosing tomatoes, look for heirloom varieties and using yellow and green tomatoes will add extra flavor and color to gazpacho. 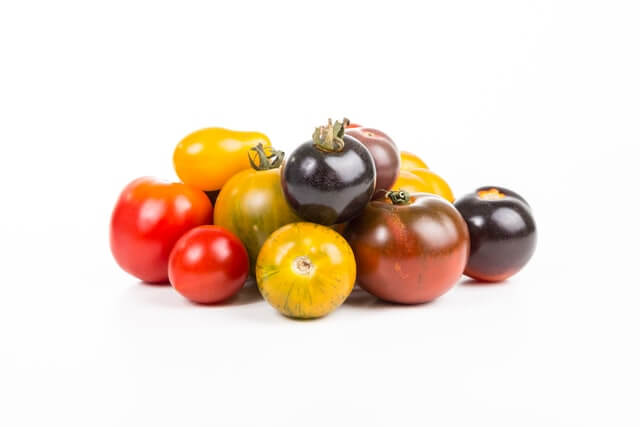 Tomatoes should be skinned, and the seeds removed before made into the soup. Some recipes may ask for English cucumbers and the thinner peels on these means there is no need to peel before using.

If you prefer to buy organic produce, then always give it a thorough wash before making raw gazpacho.

If you have the space, then you can also grow your own tomatoes, cucumbers and peppers during summer.

The tomatoes for gazpacho are best used when fully ripened to allow the flavors to come through and this is why freezing is the best solution to ensure that you can enjoy a bowl of this refreshing soup at any time of year.

You can make gazpacho with gluten free bread or use quinoa or ground almonds in place of the bread. Depending on the recipe, you may be able to cut down carbs by omitting the bread from the gazpacho and instead, just top it with a few homemade seeded whole grain bread croutons.

Using a good quality extra virgin olive oil (EVOO) and Spanish sherry vinegar alongside good quality fresh ingredients will also help to ensure that you get the most flavor from the gazpacho.

How Long Will Gazpacho Keep for in The Refrigerator?

Gazpacho will usually keep at its best for around three days in an airtight container in the refrigerator. Although there is acidity in gazpacho from the tomatoes and sherry vinegar, as it very often contains bread, this shortens its storage life.

All About Freezing Gazpacho

Gazpacho should keep at its best for between three to six months in the freezer.

A smooth gazpacho is the best type to freeze. A chunkier gazpacho will freeze, but its texture will not be as nice when defrosted because it is made with cucumber and other ingredients with high water content. When cucumber is frozen, it allows ice crystals to form inside it which leave it mushy when it is defrosted. Larger pieces of bread in the soup will also create an odd texture once thawed.

If you ​decide to freeze a chunkier gazpacho, be prepared to blend it well once defrosted. Remember you can always add a few more diced vegetables when you serve it.

Also avoid freezing a gazpacho that contains any dairy products such as cheese, instead, add these after thawing. You may also want to go easy on the garlic if you are making a full batch for the freezer as garlic does become more pungent over time when frozen.

How Do You Freeze Gazpacho?

If you have made a large batch of gazpacho, the easiest way to freeze it is by portioning it out into smaller amounts, so you only need to defrost enough for the one meal.

Airtight glass containers are ideal, or you can use Ziplock bags. If you want to use bags, then once filled, lay them flat on a cookie sheet covered with paper while they freeze. Once frozen, you can remove the cookie sheet from the freezer and stand the bags up for longer term storage.

Whichever container you choose, make sure there is a little airspace in the container or bag as the soup will expand a little when it freezes.

Remember to write down the freezing date on the container or bag with a Sharpie so you always know how long it has been in the freezer.

Avoid using plastic containers for gazpacho as tomatoes usually stain plastic and the aroma from the garlic can also impregnate the plastic. If you do use plastic and odors have been absorbed into it, then add two cups of hot water, a half cup of white vinegar and a tablespoon of baking soda to the container and leave to soak for a few days.

How To Defrost Gazpacho

Do not use the microwave to thaw gazpacho – unless serving hot – as it is a raw and cold soup.

When gazpacho is defrosted, its consistency can be less than appealing – even a smooth gazpacho. This can easily be resolved by giving it a quick blend with the food processor or an immersion blender before serving.

Once it is ready to serve, add any toppings such as diced vegetables, hardboiled eggs, seafood or more to it.

As we have seen in this post, yes, you can freeze gazpacho soup for a taste of summer all year round. In fact, as gazpacho is best made during high summer when tomatoes are ripe and sweet, you have no choice but to freeze some of it if you want to enjoy it for a little longer.

I trust that you have enjoyed reading this post on gazpacho and I hope that you have found it interesting as well as picking up a few tips along the way about how to make and freeze gazpacho.