Did you ever get anemia before? If you did, your mother probably loaded your stomach with tons of spinach. My mom did, no matter how many times I say that I hate it and hate its taste, she will feed me with spinach anyways, and this is non-negotiable.

I grew up and I became a doctor and a few weeks ago I was setting in a clinical round with two internal medicine professors , they were discussing the effect of spinach on anemia, one of them was strongly against it because it contains ferrous iron not ferric and this form of iron is hard to absorb and the body doesn't utilize it.

The other thought that vitamin supplementation along with it will make ferrous more useful and spinach is still a great option for anemia, the debated for 30 minutes and finally got a conclusion that I’m not going to say now, but in this article I will reveille my professor’s conclusion along with other benefits of spinach. 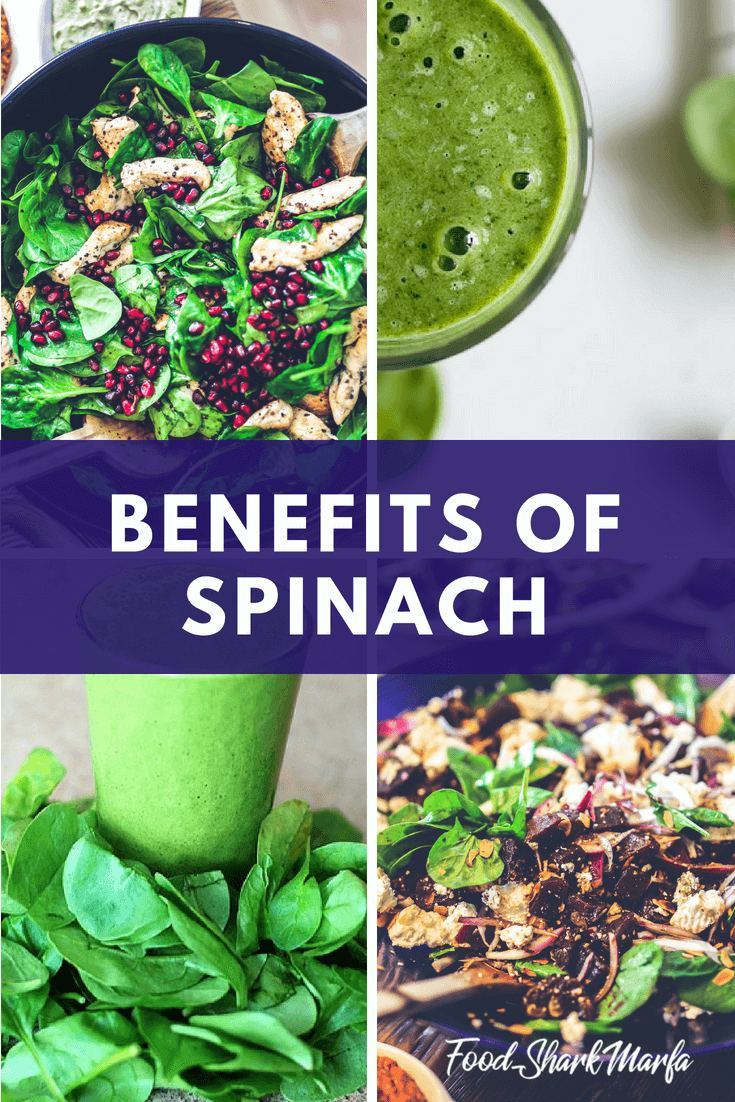 Spinach is a green plant with an awful taste and of a very high nutritional value. Its scientific name is Spinacia oleracea, it’s an annual plant that can survive the winter, I’m pretty sure that you don’t want me to talk about its family history so let’s discuss the nutritional value of spinach. In the photo below, here is the caloric supply and the nutrients found in spinach. 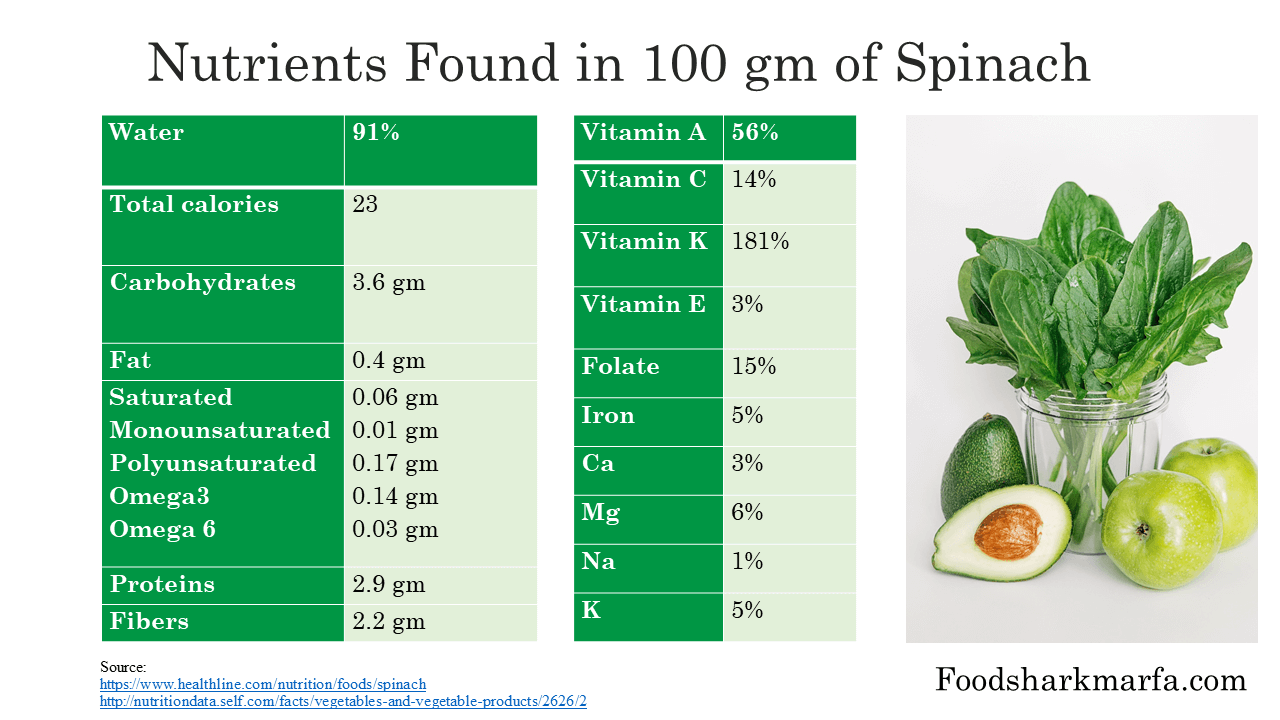 What is the Best Way to Eat Spinach?

Do we have to eat it cooked? Raw? Make it a juice? Convert it to a powder?

What the Studies Showed About Eating Spinach

Many studies compared the amount of nutrient in raw spinach vs. cooked spinach and they found that the amount of VIT C, folic acid [1] and iron[2] decrease significantly when cooked by conventional methods and decrease even more with microwaved, studies also showed that the least loss of nutrient is achieved by stir-fry the vegetables with oils because boiling and using water will lead to loss of a good portion of the nutrients in the water.

But spinach contains a relatively high amount of oxalate so if you have a kidney disease or you have a tendency to form stones you may want to cook the spinach because most of the oxalate is lost in water [3] and you will still get about 50% of the nutrients found in the spinach, for healthy people oxalate is not a problem because the kidney gets rid of excess oxalate without forming stones.

So, my advice is to eat raw spinach or cook it using oil not water and don’t expose it to heat for a long time and use water for cooking if you are a kidney disease patient.

There are other forms of spinach like spinach juice (I'm going to try this one to see if I can bear to drink it or it tastes just like the original awful spinach, actually I don’t know if I emphasized enough how much I hate spinach or not, did i? ) and spinach powder but I don’t encourage the consumption of the powder, it’s good and better than to not consume any spinach at all but still you lose some fibers and nutrients throughout food processing, you might want to give the juice a go.

Should We Eat Spinach Every Day?

Although spinach is an excellent food, I don't recommend eating it on a daily basis because it contains oxalic acid and as we discussed this could be potentially dangerous for patients with kidney diseases, and also you need your diet to be a mix of all types of foods and to be balanced without a focus on a specific type of food, you should add more fruits, vegetable, meat, egg and a good source of fat because spinach contains zero fat.

Spinach as a Cheap Treatment for Anemia

This effect has a lot of debate around it, but the claim that spinach actually may be a good source of iron seems to be the winner (unfortunately, now I feel obliged to add it to my diet), I researched A LOT to declare this result comfortably, new studies showed that oxalate doesn’t affect iron absorption but it’s still hard for the body to utilize the iron form present in spinach, so spinach will be a great source of iron under 2 conditions:

Can Spinach Cause Weight Loss?

Well, honestly the claims that eating “anything, you name it” will make you lose weight, annoys me very very much, food is food, each food contains a certain amount of calories and a set of nutrients you can adjust your diet to contain the healthiest and the lowest caloric food but no food will magically enter your body and destroys fat, you will burn fat slowly when you consume healthier food with low calories because you will get energy by burning stored fat, food will just be kind to you by being low caloric and that’s it.

Spinach is a good meal option if you are on a diet and trying t lose weight because it is low caloric and very nourishing, it will support you during your diet and prevent you from getting malnutritional diseases.

Spinach for a Thicker and Longer hair

Eating spinach regularly is equal to taking hair vitamin supplementation, in my opinion. Spinach has tons of nutrients like iron, vitamin C, vitamin K, vitamin A and vitamin B, this mix of nutrients is essential for hair growth.

Anemia is one of the commonest causes of alopecia (hair falling) if a patient came to me complaining of hair falling, I immediately order complete blood count as a first step, iron in spinach as we discussed before helps in keeping the blood iron level high and enough to promote hair growth.

Each hair goes through a cycle of growth, death and falling off, scientists investigated the effect of vitamin C on this cycle [7], they found that vitamin C decreases the velocity of cell death and increase the rates of growth of new hair. Spinach is well known for its extraordinarily high contents of vitamin C, so, consuming spinach for that matter is highly advisable.

This is not a known effect of spinach but I found a lot of researches that discuss the benefits of spinach for eye health and the reasons behind that.

I’m going to start the story from the beginning, plants are colored because they contain organic pigments called carotenoids, carotenoids are not naturally synthesized by the body but we can get different types of carotenoids by consuming it in food. Spinach contains two carotenoids of special importance for the eye health Lutein and Zeaxanthin, they are found in the macula lutea of the eye (part of the retina), and they provide significant protection against the light falling on the retina,  they also act as antioxidants and prevent the formation of free radicals which destroys the retina [8] .

Benefits of Spinach for Skin

Okay, remember Lutein and Zeaxanthin? Those 2 antioxidants were proved to protect the skin from harmful sunlight, the ultraviolet rays and free radicals [9] this effect was only recently discovered.

I've always been a pale person with no color in my face just a yellowish white skin with no natural blush or anything at all and this is so annoying, I see people in the streets with a healthy glowing skin and a natural blush but not me for some reason!!, I finally discovered this reason accidentally when I took some multivitamins pills for a month, my skin texture and appearance started to improve gradually, but I don't like taking pills as it's very hard to swallow for me so I started to look for natural alternatives for it and guess which plant was at the top of my list? YES, it was spinach (unfortunately again).

Vitamin C is the responsible vitamin for skin glowing and integrity, deficiency of this vitamin will give you a dull skin just like mine.

Spinach is also helpful in fighting acne due to its high vitamin content and the presence of antioxidants. You can use spinach both topically by applying its juice directly on your face, or you can directly eat it.

Scientists gave non diabetic rabbits a spinach tea (what!! They even made a tea out of it! Can’t even imagine what it tastes like)  the rabbits showed a slight increase in blood glucose levels but then the level decreased significantly and stabilized, this study shows that there is a potential in spinach to be helpful for type 2 diabetes (insulin non-dependant). The mechanism is still unknown [11].

Benefits of Spinach for Cardiovascular Health

What do you know about nitrates? Other than being used in explosives, Nitrates is a substance present in spinach in a large amounts, scientists used both spinach for its nitrate contents and apple for its flavonoid content and they monitored its effect on the overall production of Nitric acid in the stomach [12], this combination increased the production of nitric acid and this is a great news for your heart and blood vessels.

Nitric acid makes your blood vessels wider so the blood runs smoothly in it; this effect decreases the blood pressure and improves the circulation.

Effect of Spinach on Brain Health

Aging strongest effect is on the brain, concentration and cognitive functions start to slowly decline, Spinach has been found to delay this effect because it reaches in antioxidants especially vitamin E [13], those antioxidants delay the destruction of neurons (brain cells), and though it's not proven yet, but scientists believe that it may have an effect on neurodegenerative diseases like parkinsonism, they believe that it may delay its onset and slow the progression.

Eating spinach is perfectly safe and useful, I encourage everyone to add a good amount of spinach to their diet whatever its form is, and I’d also recommend that you consult your doctor about the amount of spinach you can eat if you are diabetic o suffering from clotting disorder.

1 thought on “All The Superb Health Benefits of Spinach”