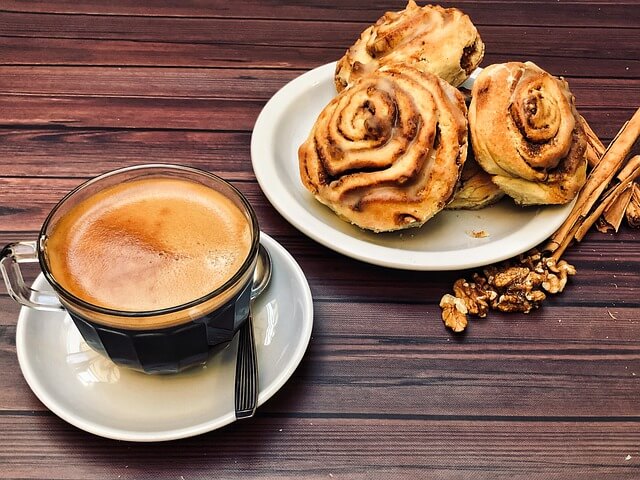 A popular breakfast treat, cinnamon rolls are yeast-leavened pastries that originally evolved in northern Europe – probably Sweden – and came to the New World with settlers. In fact, cinnamon rolls are that popular in Sweden, they are celebrated on the 4 October, which is known as kanelbullens dag or International Cinnamon Roll Day.

As popular as they are, unfortunately, cinnamon rolls dry out quickly because they are yeast-leavened and if they are also home baked, they do not contain any preservatives to prolong shelf life. We know that in some households, cinnamon rolls never get the chance to dry out, but if you do want to make a large batch and keep them fresh, then room temperature or refrigerator storage will keep them for a short amount of time, but for longer storage, cinnamon rolls need to be frozen.

In this post, I look at all the different ways in which you can store cinnamon rolls and how to freshen them up after they have been stored. I particularly focus on freezing cinnamon rolls which have been fully baked and iced, as when cinnamon rolls are frozen in this way, they need the least amount of time and fuss to reheat in the morning.

How To Store Cinnamon Rolls At Room Temperature

As is often the case, if you know you will be eating cinnamon rolls quickly after baking, then once cool, you can place the rolls into an airtight container or Ziplock bag and seal it up.

At room temperature, homemade or store bought cinnamon rolls can still be eaten up to two days after baking. Gently warming them up in the oven for 5 to 10 minutes at 350°F wrapped in a moist towel can help to revive them when they have dried out, but be careful not to let the frosting melt too much.

How to Store Cinnamon Rolls in The Refrigerator

If you put homemade or store bought cinnamon rolls in the refrigerator, they will keep for up to one week, but again, the longer they are stored, the drier they will become.

You can also store unrisen rolls in the refrigerator for 24 hours before baking. Once the dough has done its first rise, been rolled out and cut into slices with the cinnamon filling, you can place the rolls onto a cookie sheet, cover them with plastic wrap and/or aluminum foil and place in the refrigerator. Do not leave them in there any longer than 24 hours as the filling can become too liquid.

When you are ready to bake these rolls, take them out of the refrigerator and leave them in a warm place to rise for the second time until they have doubled in size. This second proof will take longer as the dough has to warm up to room temperature before the yeast starts working fully again. Depending on your recipe though, the rolls may have already risen a little in the refrigerator before you take them out.

How to Store Cinnamon Rolls in The Freezer

In the next section, I offer a step by step tutorial on storing baked cinnamon rolls in the freezer and also consider some of the other ways that you can freeze them.

I personally choose to freeze cinnamon rolls and other types of sweet pastries  ready prepared, so that all I need do is take some out first thing in the morning – or even leave them in the fridge overnight – and after a short thaw (if required) and reheat, they are ready to serve.

This way of freezing is also suitable for rolls you have bought from the bakery as well as homemade ones. 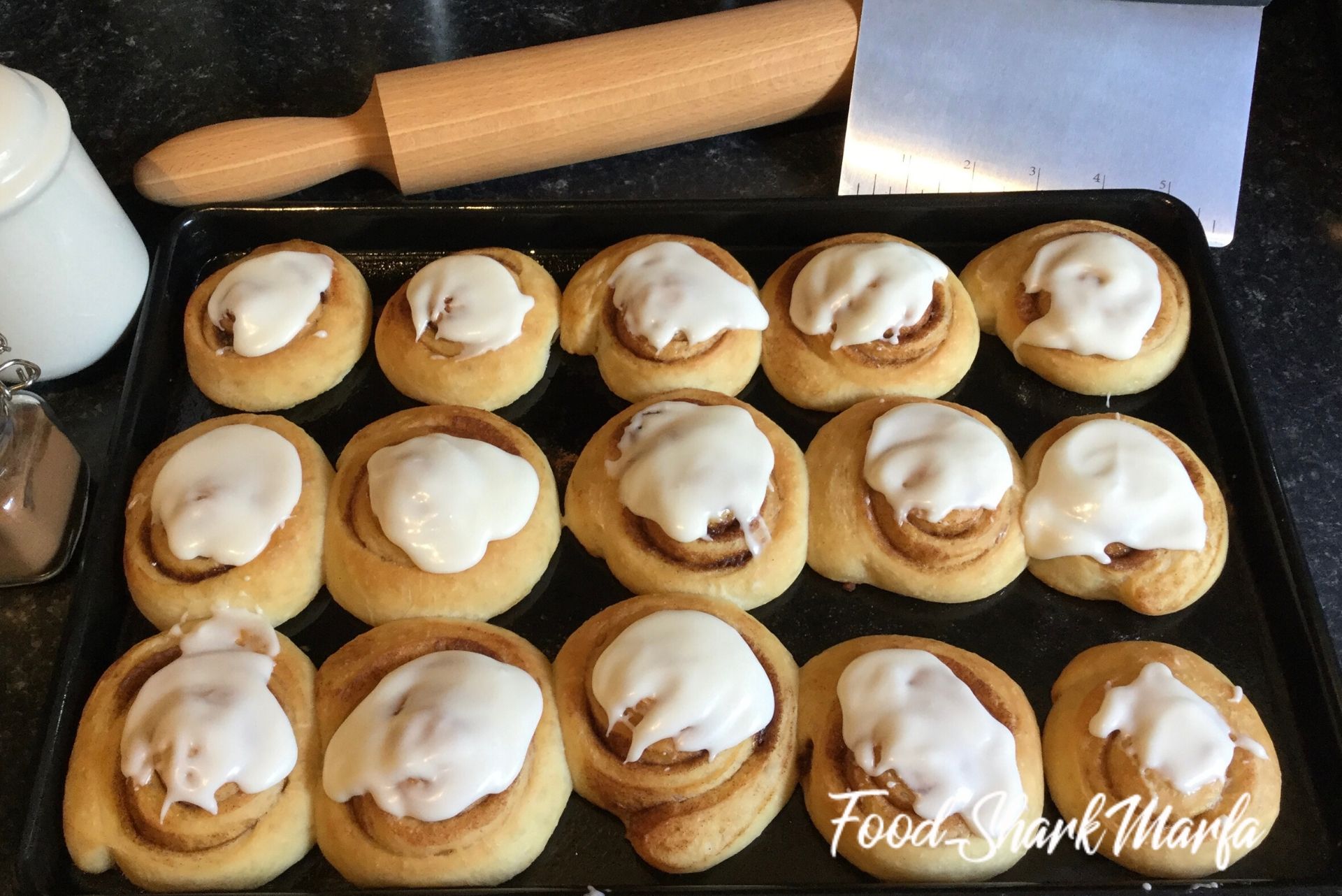 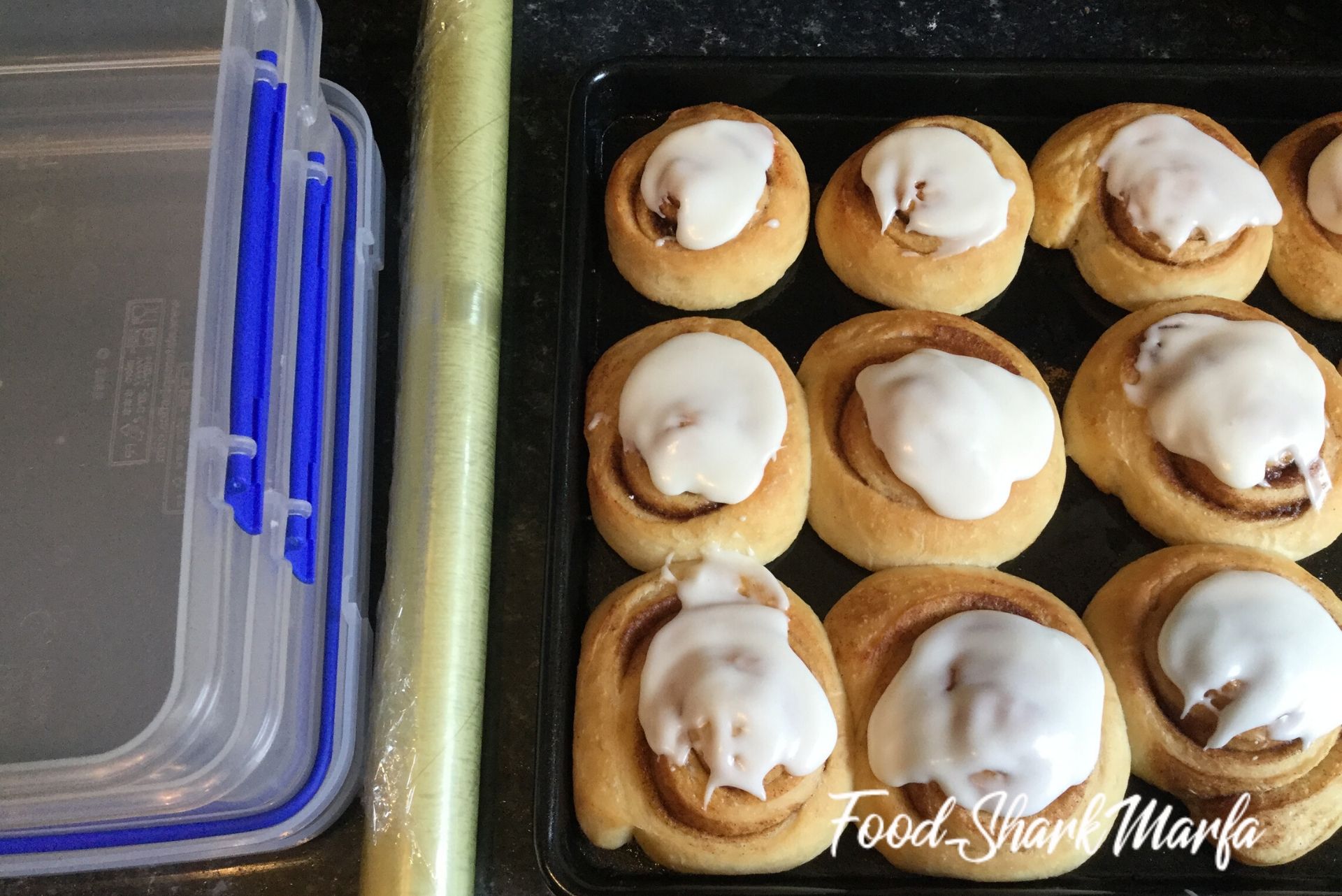 It is easier to separate them now so you can take out as few or as many as you want from the freezer. You can freeze the full batch on the tray, but if you do, you will need to thaw the full tray out overnight before warming up in the morning. It can also be a pain if your baking pan or sheet is a favorite! 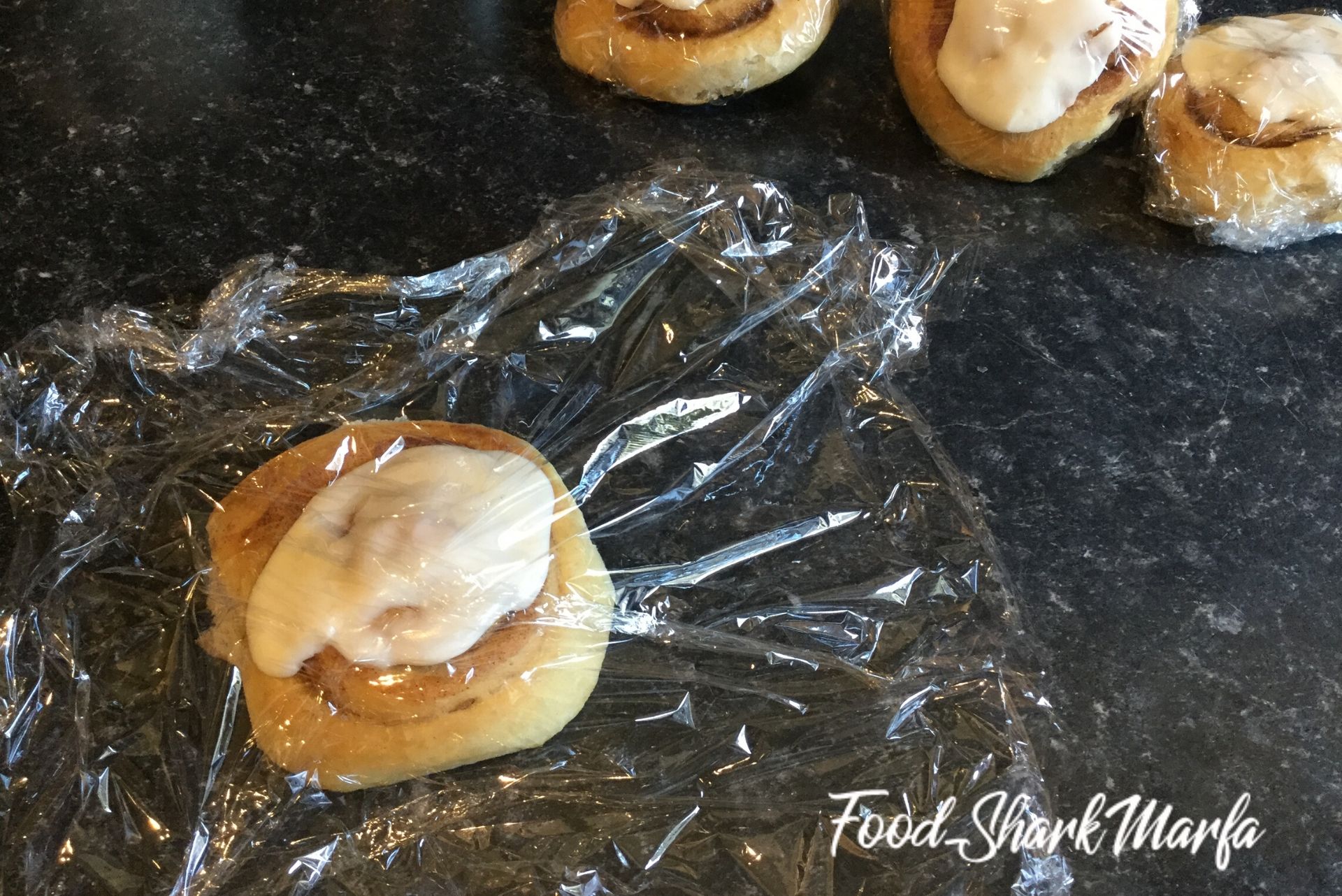 Step 3: Pack into the airtight container or Ziplock bag

Once all the rolls have been wrapped, place them carefully into the airtight container or bake and seal it. Once sealed, it can go into the freezer.

These frozen cinnamon rolls should keep well for up to two months, but for them to be at their best, it is usually better to eat them within one month. You may need to adjust the storage time depending on what type of frosting you have used.

To Thaw Out the Cinnamon Rolls

Take out how many rolls you need and leave them on the countertop. You can unwrap them if you wish. They will take around an hour or so to thaw out at room temperature, depending on what size they are.

Once thawed, place the rolls on a cookie sheet and loosely place foil over the tray so that it ‘tents’ over the rolls. Heat them in a pre-heated oven for no longer than 10 minutes set at 350°F.

You can put them still frozen in the oven on a lower setting for 15 to 20 minutes or so for them to thaw out and warm up, but as they are fully cooked, you can start to overcook them and there is more risk of melting the frosting. 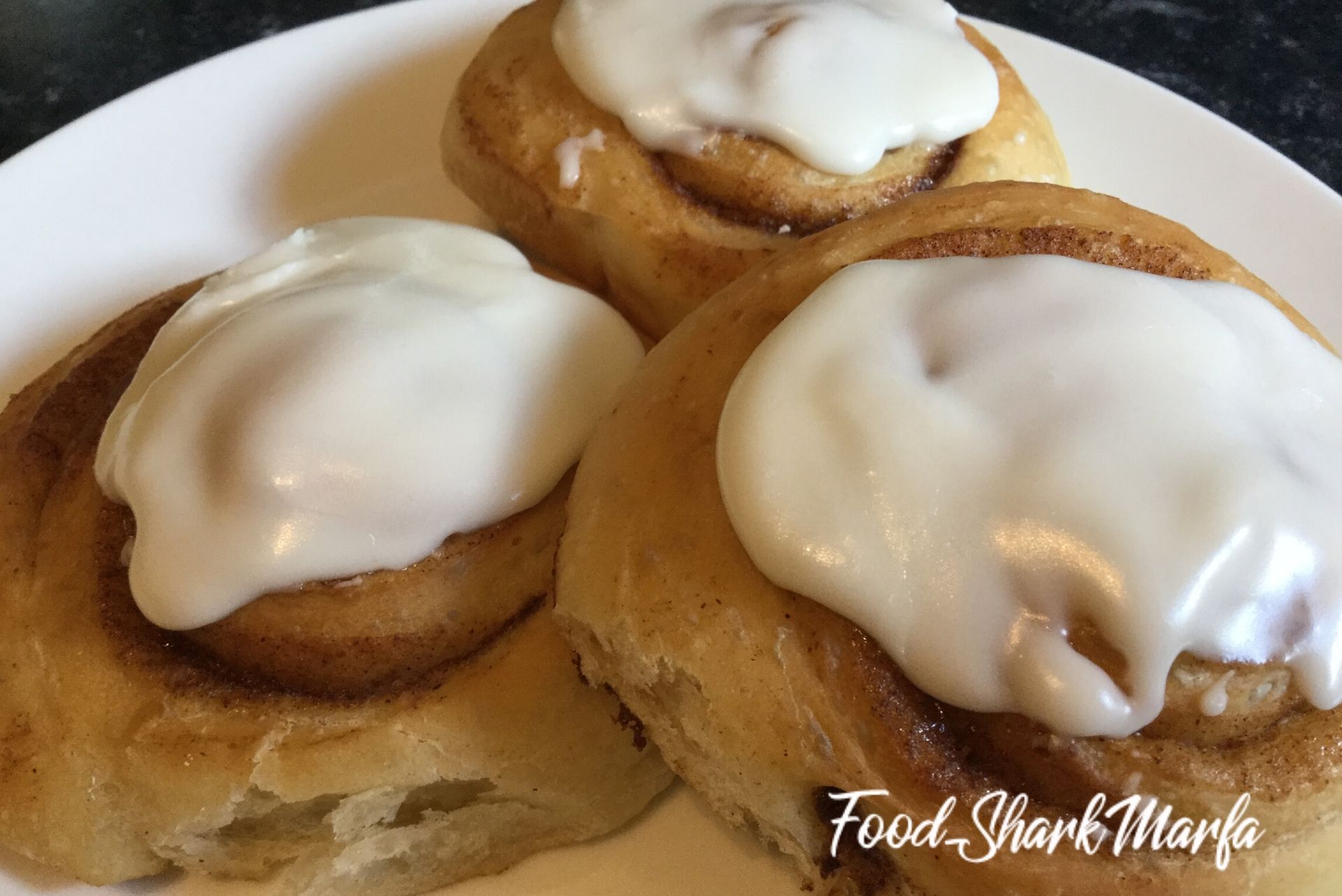 You can also thaw them/heat them in the microwave oven; just follow time guidance from the manufacturer and do keep an eye on them as they can go stale and hard very quickly when thawed/reheated this way. Sometimes putting a little butter on exposed parts of the roll (not where the icing) is can help them stay moist in the microwave.

Other Ways to Freeze Cinnamon Rolls

Freezing Them Without Frosting

If you freeze cinnamon rolls without frosting, it is easier to thaw and re-heat them directly in the oven, but as you will then need to leave them to cook a little before frosting, this is more of a personal choice around how much time you want to spend preparing them to eat on a Sunday morning.

If you do want to freeze them without frosting, follow the step by step above, but with cinnamon rolls that are fully cooked and cooled, but without any frosting.

This method can almost be as time consuming as making them from scratch as you still need to do the second rise and bake. To freeze them unbaked, make and cut the rolls. Depending on your recipe, this is usually be after the first rise.

You then need to wrap the uncooked rolls in plastic wrap or aluminum foil – either separately or as a whole tray - and carefully place them into an airtight container in the freezer.

The unbaked rolls need to be taken out of the freezer the night before you want them, placed onto a cookie sheet and left in the refrigerator overnight. In the morning, you need to put them somewhere warm so the yeast can activate once more and undergo the second rise and double in size before cooking them in the oven and frosting. The second rise will take longer that it would if you were baking them as fresh as the dough needs the extra time to warm up.

I personally have had less than great experiences when freezing cinnamon rolls or other pastries unbaked, maybe because I tend to use an active dry rather than an instant dry yeast – which is often more tolerant of freezing. Yeast does become inactive when exposed to cold temperatures though and some of the yeast will die from the experience of being stored in the freezer! There is always a risk when freezing unbaked goods that you will not get a full rise, or it will take longer to rise than it usually would do as not as much of the yeast is working, or not working as well as it should do.

Adding extra yeast to the mix can help resolve this, but the risk of adding more yeast is that you then end up with very yeast-y tasting cinnamon rolls. It is worth some experimenting though with your favorite recipe unbaked, as you can store more unbaked cinnamon rolls than baked ones in the freezer because they are half the size. Remember though that you still want to be using the unbaked dough with a month or so as the longer it stays in the freezer, the more the yeast action can be damaged.

Unlike freezing them uncooked, parbaking before freezing means less time is needed before your frozen cinnamon rolls are ready. To freeze them parbaked, you need to make your cinnamon rolls as normal but when they go into bake, only bake them for 10 to 15 minutes – or before they start to brown.

At this point, remove them from the oven and allow them to cool fully. You can then either separate them into smaller batches, or just wrap the full pan in two layers of plastic wrap and place in the freezer. These parbaked cinnamon rolls should be at their best for around two weeks in the freezer.

The night before you want to eat them, transfer them to the refrigerator and allow them to thaw. In the morning, place in the oven at 350°F until they are browned. This should take 10 to 15 minutes or so. Once cooling, you can frost them and serve.

How to Use Up Stale Cinnamon Rolls

In case they have been left out on the countertop for too long, or you have not been able to freshen them up much in the oven, then instead of trashing them, how about making a bread pudding or using them in a trifle. You could also make cinnamon roll fritters or turn them into French toast. Putting them in the waffle iron to make cinnamon waffles can even give those stale rolls a whole new lease of life! 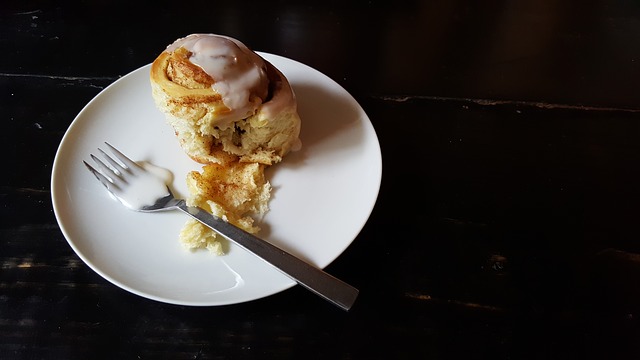 As I’ve also talked about the other ways you can freeze cinnamon rolls, such as uncooked or parbaked, this gives you the choice to pick the best longer-term storage solution for you. Do you have another tried and tested way of storing cinnamon rolls? Feel free to share it in the comments box below, as I would love to hear about it. Also, if you have enjoyed reading this, feel free to share it with your friends!
5 / 5 ( 2 votes )