Although sriracha has only been available in the US since the early 1980s, it has for many of us become our ‘hot sauce’ of choice. A simple recipe, sriracha brings heat and flavor to many foods, not least our burgers and wraps. 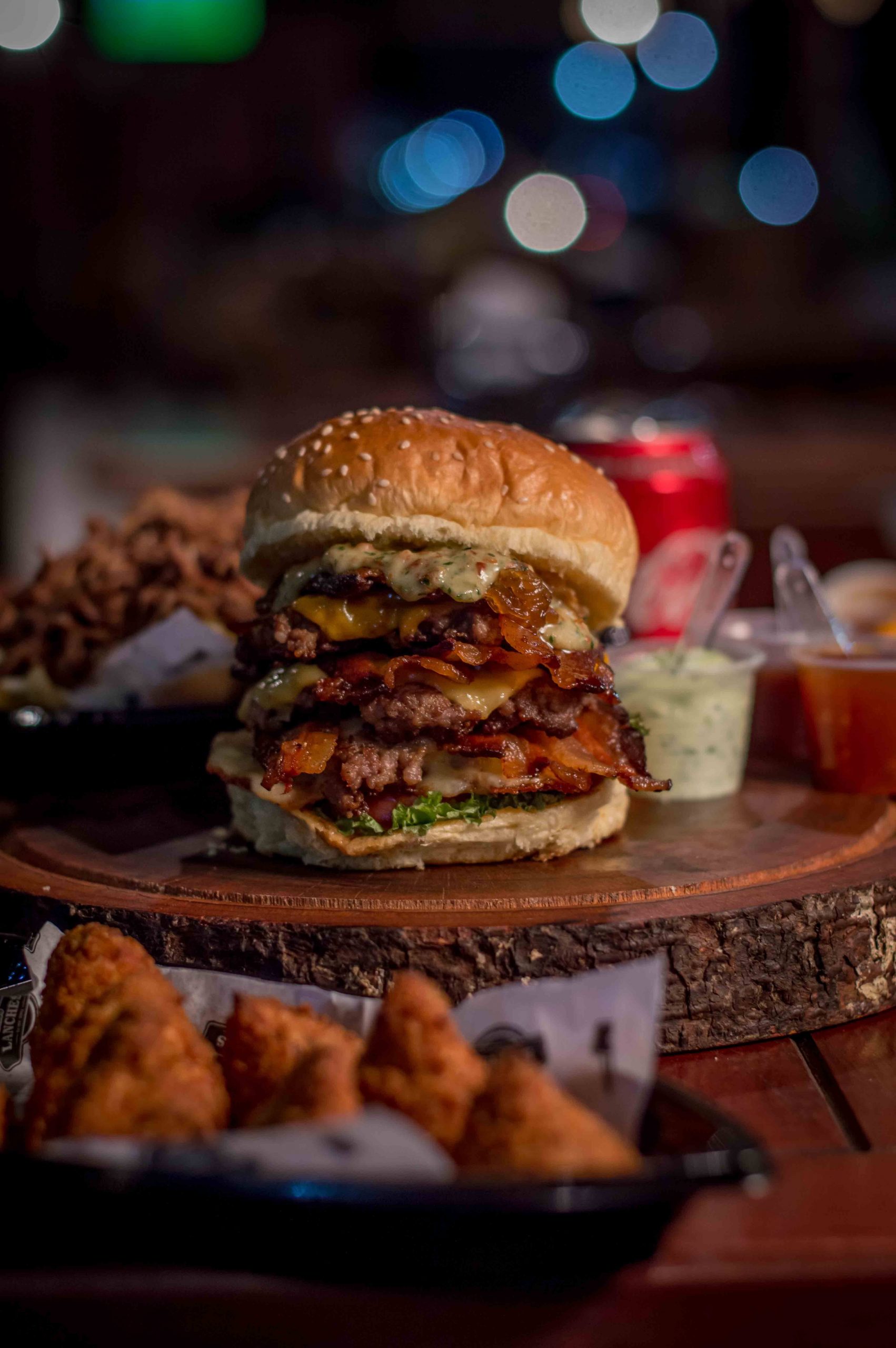 As with many other condiments and sauces, sriracha adds unique flavor to a dish, but if you do run out, there are some substitutes available – a number of which you probably already have in your kitchen.

In this post we take a look at some sriracha substitutes, as well as learn more about sriracha, and just some of the many ways you can use it to add some heat to everyday meals.

It is thought that sriracha was first made around eighty years ago in Si Racha, a small Thai coastal town. This Sriraja Panich sauce quickly became popular and in the mid-1970s, a Vietnamese man called David Tran started to make his own chili sauce which he bottled in baby food jars left in Vietnam by American soldiers.

Tran started to sell his sauce to restaurants and shops and by the late 1970s, he had made enough money for him and his family to leave Vietnam for America.

Settling in Southern California, Tran started to manufacture his sauce using the locally grown red jalapeno chili peppers and in 1980, Huy Fong Foods Sriracha Sauce was launched. The bottle was decorated with Tran’s Chinese Zodiac sign as although he was born in Vietnam, he was ethnically Chinese. The company name of Huy Fong Foods was named after the ship that transported the Tran family from Asia to America.

The rooster image on Huy Fong sriracha sauce is also why sriracha is often called ‘rooster sauce’. Also known as ‘ketchup-killer’, there appears to be no ‘correct’ way to pronounce sriracha, with sir-ah-cha and ‘see-rach-ah’ being just two variations used by companies that manufacture sriracha!

Because the sriracha name was never trademarked, there are numerous sriracha sauces now available, although the original ‘rooster sauce’ still sells around ten million bottles a year. 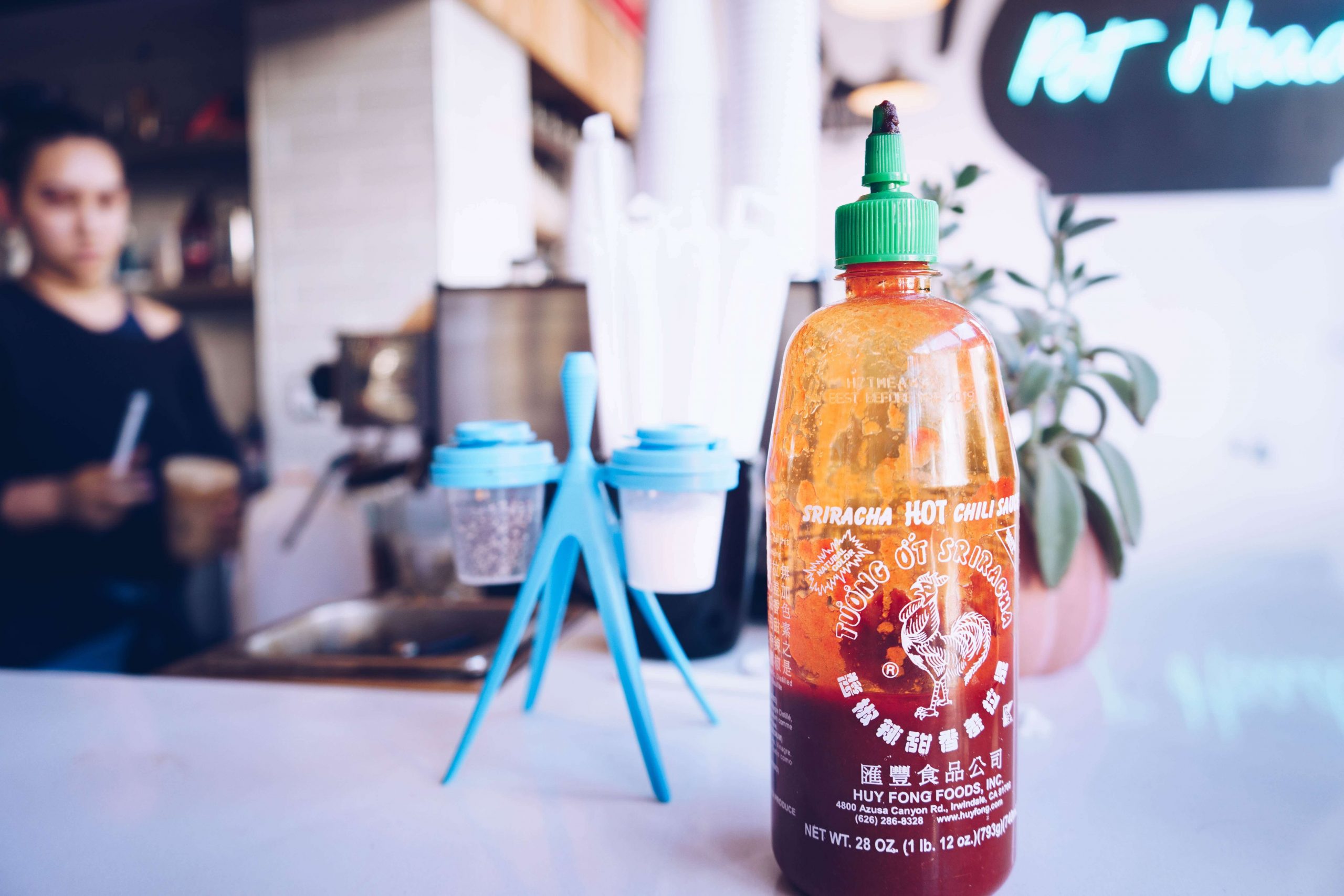 Sriracha is made with red jalapeno peppers, all of which are grown in Ventura County in California. Sriracha also contains sugar, garlic, salt and vinegar, alongside two preservatives – potassium sorbate and sodium bisulfite – and xanthan gum which binds and thickens.

Although sriracha is made with red jalapenos, because the jalapenos are processed, they are less hot than raw red jalapenos. With red jalapenos sitting between 2,000 and 8,000 on the Scoville heat scale – the measure of chili pepper heat – sriracha only comes in around 2,200, which is around the same heat level as Anaheim and Fresno peppers.

Although the flavor will vary slightly between producers, sriracha is generally spicy and tangy-sweet with garlic notes. Its consistency can be similar to ketchup or a little thinner. Often known as sriracha sauce, if sriracha is used as a sauce it does have the potential to over flavor, so should be used as a sauce carefully. 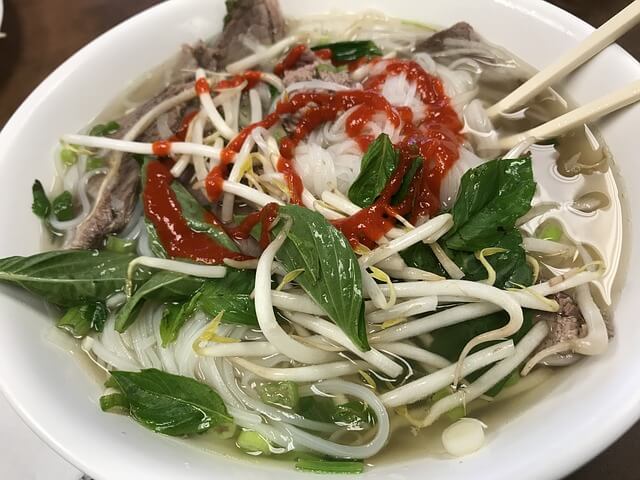 As a generic hot sauce, the use of sriracha is almost unlimited. As well as pad Thai, add it to ramen or rice dishes or even just add a little to winter vegetables for some warming flavor.

Use it in meat marinades, meatloaf, meatballs, chicken wings and other meat dishes as well as in hot soups or even cold soups such as gazpacho. It can be used as a dipping sauce, or you can mix a little sriracha into sour cream, cream cheese or mayo dips as it goes very well with creamier foods, including those such as mac and cheese and egg dishes.

Sriracha will add spice to a Bloody Mary cocktail or other tomato-based drinks.

Although sriracha is available from most grocery stores; just in case you or the grocery store has run out, or even if you would like to experiment with different flavors or ingredients, here are some of the substitutes you can use in a range of recipes in place of sriracha.

As sambal oelek has a thicker consistency than sriracha, you can thin it out with a little water to obtain more of a ketchup consistency. Use the same amount of sambal oelek as you would of sriracha.

If you have some red jalapenos available, then you can make an easy homemade sriracha sauce. There are many different recipes available online. Just be aware that unless you are canning this, it will not keep as long as store-bought sriracha and will need to be stored in the refrigerator. 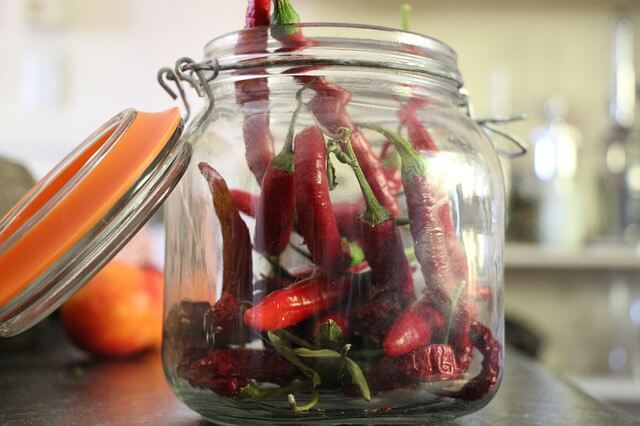 Depending on how easy it is to buy where you live, you may have Tapatio Hot Sauce to hand. Made in California since the early 1970s, Tapatio is made with red pepper, garlic, salt, acetic acid, spices and preservatives.

Depending on the type of recipe, Tapatio can make a suitable substitute for sriracha but be aware that the heat rating for Tapatio Hot Sauce is around 3,000 on the Scoville heat scale which is higher than sriracha. This means you should only need to use around half to one third of the amount of Tapatio than you would sriracha.

Although a hot sauce originally of Portuguese origin, peri peri or piri piri hot sauce is made with a type of African bird’s eye pepper.

Peri peri will add a different flavor as it contains herbs such as basil and oregano alongside garlic, salt and acetic acid, but if sriracha is wanted for a seafood recipe, then peri peri sauce can be a suitable substitute. 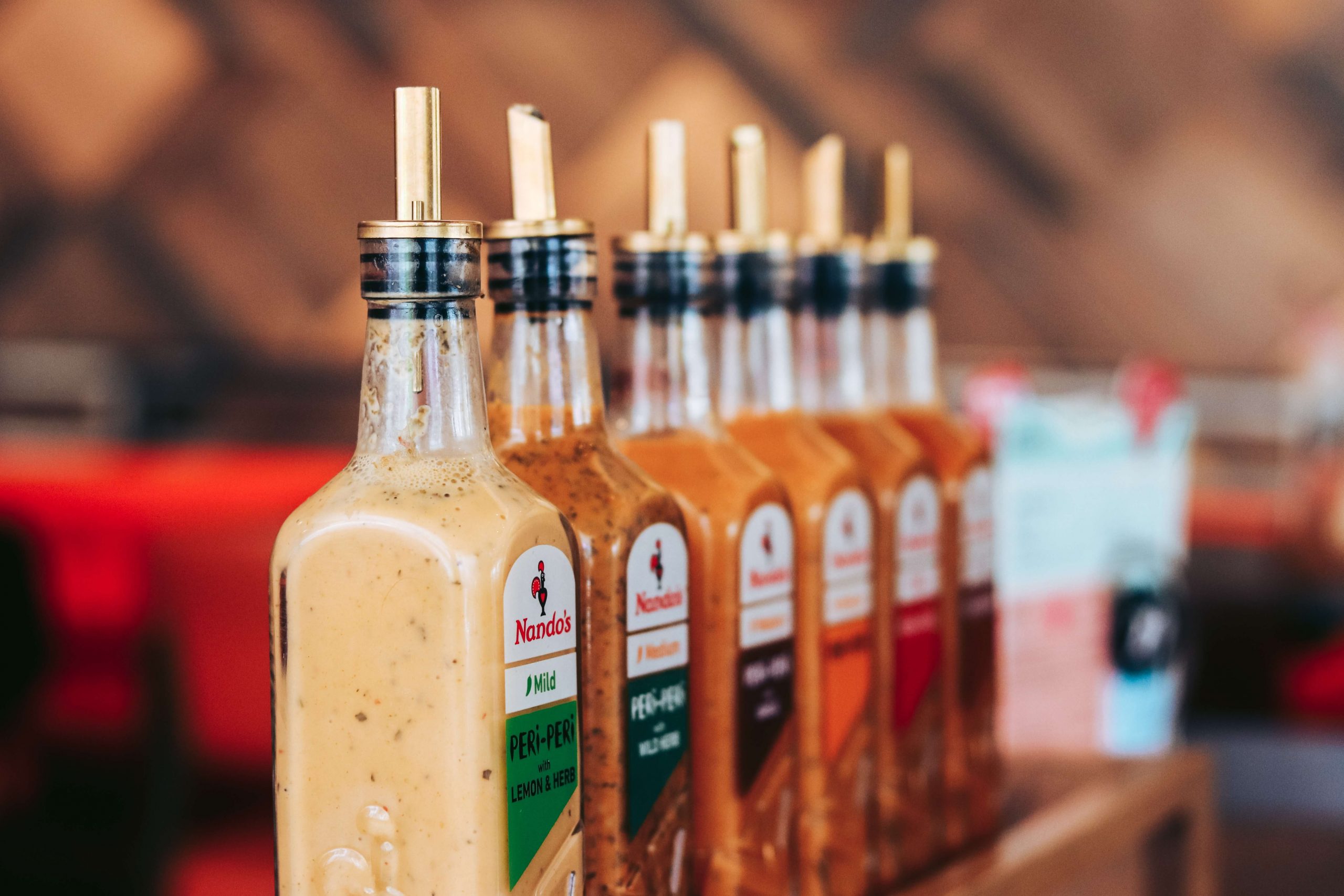 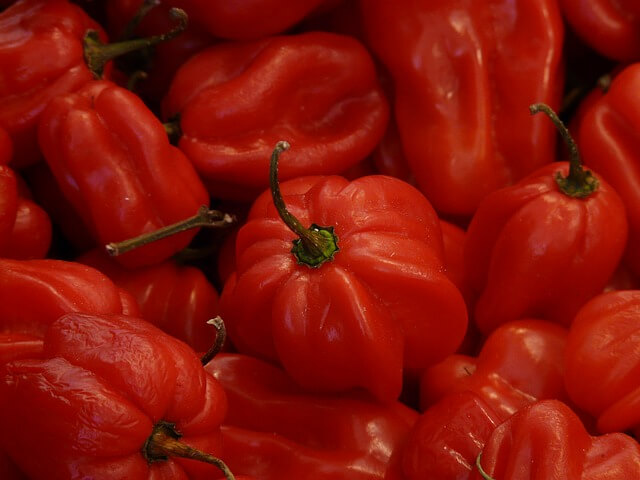 If you do add El Yucateco sauce, you may also want to add a little garlic powder and potentially adjust the amount of onion in the recipe to compensate for the onion powder in the sauce.

Initially use half the amount of El Yucateco sauce as you would of sriracha and then add more if necessary.

With most of us having a bottle of Tabasco to hand, it can be tempting to add a splash of Tabasco sauce to the dish as a red sauce to replace another red sauce.

The extra vinegar also gives a different flavor to the finished dish so although Tabasco goes well, and may be an acceptable substitute in Southern dishes, egg recipes and Bloody Mary cocktails, use it as a sriracha substitute with caution as the vinegar tang will overpower lighter flavored dishes. 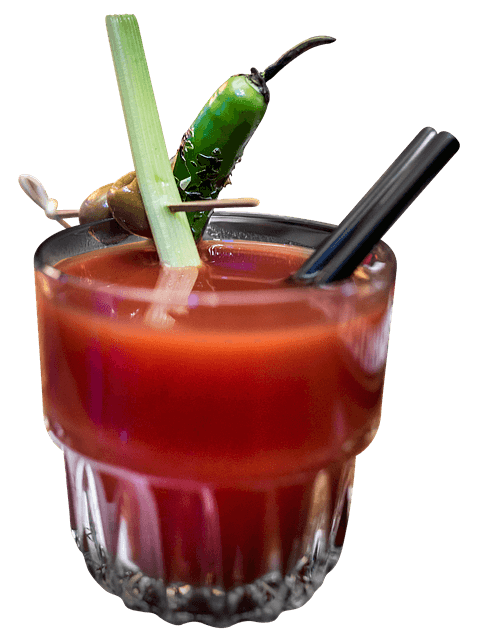 McIlhenny Co., the company that makes Tabasco sauce have also recently released their own sriracha sauce, so that may be one to keep an eye out for at the grocery store.

7. Other Options for Substituting Sriracha

Other potential ingredients that you could consider using to acquire a sriracha-like taste include sweet chili sauce. With its sweet garlic flavor, it does have some similarities in flavor to sriracha but it contains a lot less heat so you can add some extra heat from another chili source – preferably jalapeno – although ground cayenne pepper or crushed red pepper flakes will add heat to the recipe.

Do be careful not to add too much as cayenne pepper though as these have fruitier notes than jalapenos. If you need to sweeten up a sriracha substitute, then just add a little sugar to the substitute. 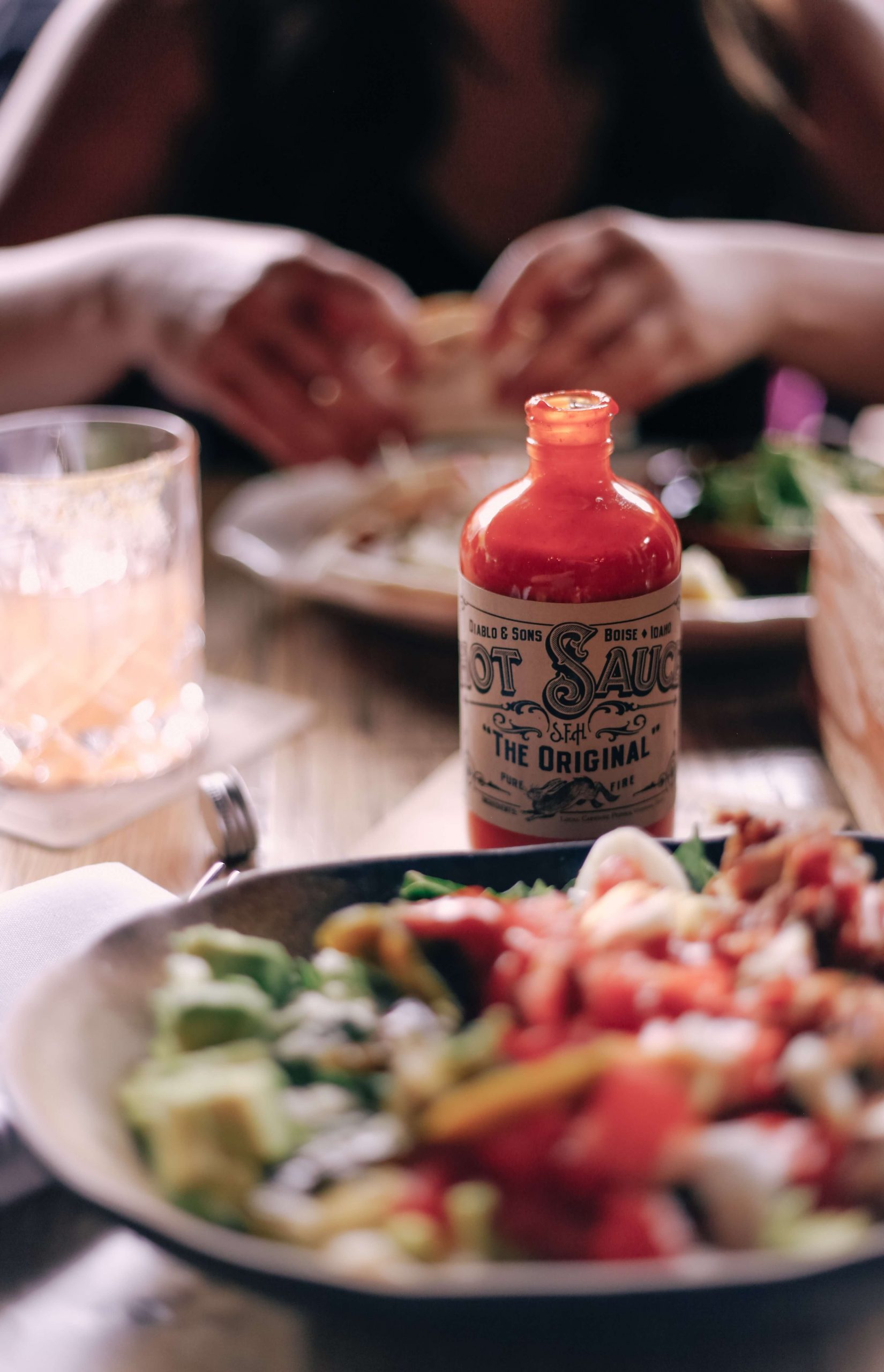 If you substitute sriracha with another type of hot sauce, use one with fewer spices and herbs added to it so that it will not change the flavor to much. If the hot sauce does not contain vinegar, then add a little vinegar alongside the hot sauce for extra tang.

Not just a condiment, sriracha gives flavor and heat to many dishes. Sambal oelek with a little garlic powder is probably the best substitute to give the nearest flavor match or if you have some red jalapeno peppers available, then you may want to make homemade sriracha.

Although a hot sauce, sriracha does have a distinctive flavor, so not all types of hot sauce are suitable to substitute. You need to carefully consider how the other ingredients such as spices will affect the flavor of the finished dish. As some hot sauces can be hotter than sriracha, in most cases just start by adding half the amount of hot sauce as you would of sriracha. You can then add more as required. 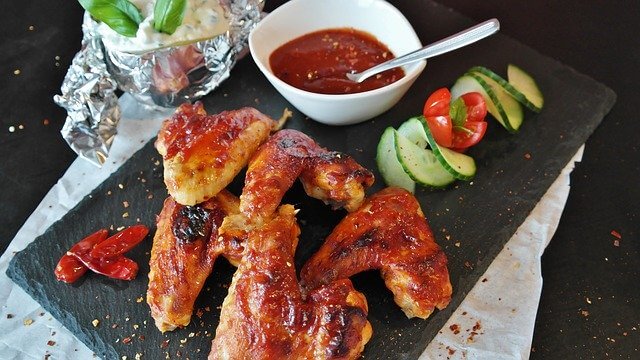