If you always cut away the skin of a peach before eating, then you are not alone. Peach skin is a fully edible skin, but for many, even the thought of eating peach skin can be a step too far. The fuzziness of peach skin is probably the main reasons that people often avoid it.

Although scientists have yet to all agree as to why peaches have fuzzy skin, it is probably there for protection. Peaches naturally have thin skin, and when they are exposed to a lot of moisture from rain and dew, it can cause them to start to rot prematurely. 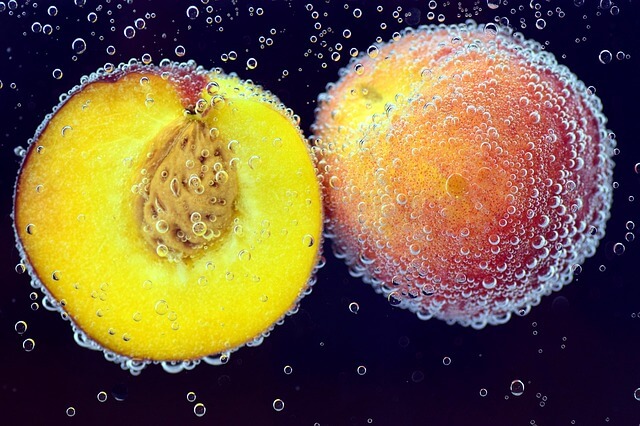 Although the fuzzy skin does not fully waterproof a peach, it does help stop smaller quantities of water from settling on the skin. The fuzz may also play a role in protecting against insect protection as it can act as an irritant for some bugs.

You may notice that if you pick your own peaches, or buy them from a farmer’s market, these have much more fuzz on them than the ones you buy from the grocery store. This is because peaches that are sold commercially usually have their excess fuzz gently removed before they are packaged and shipped. 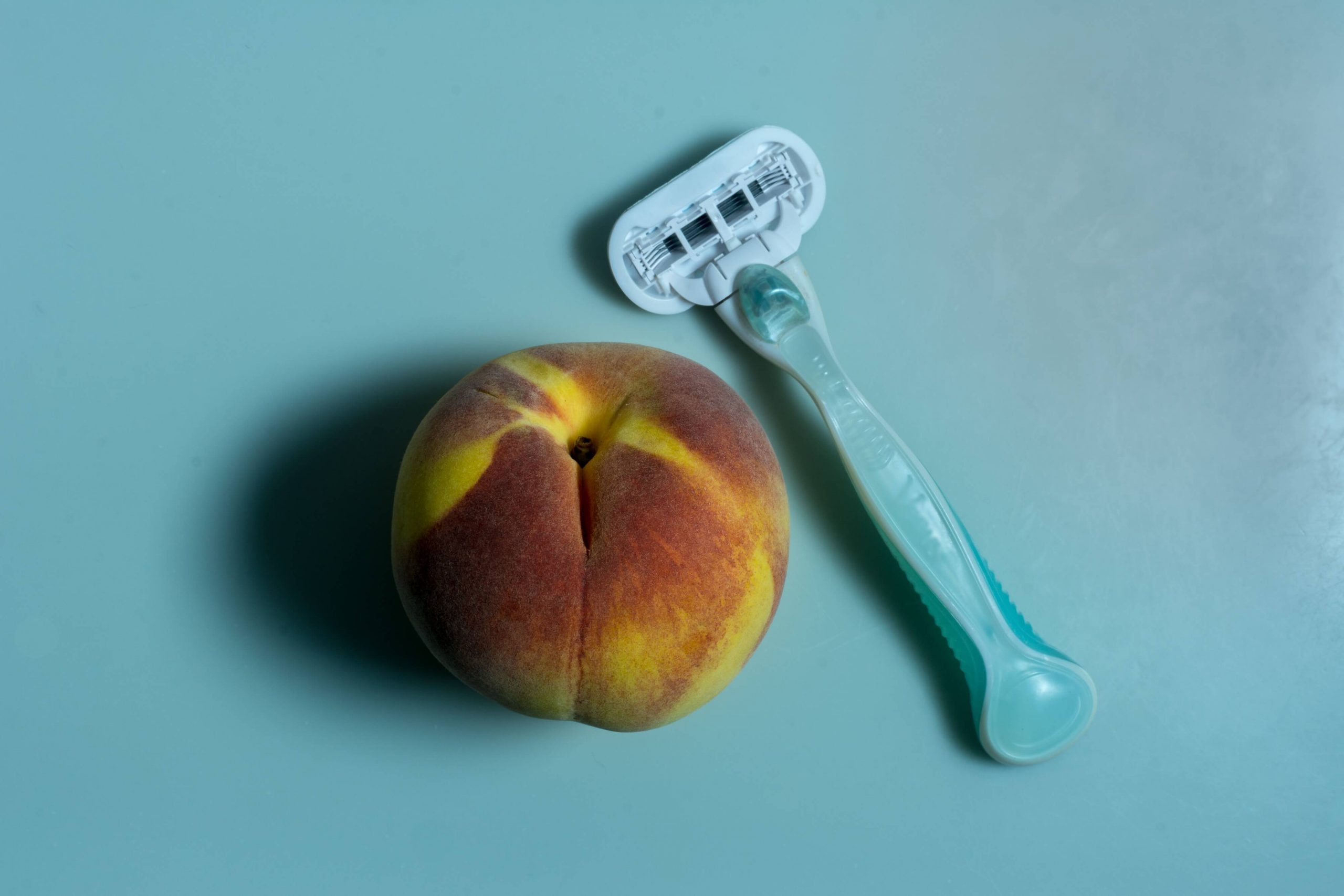 Before you eat a skin-on peach, or even before you peel it off, always give the peach a good wash first. You can do this in lukewarm water and wipe it gently with a clean sponge or cloth. You can then pat it dry with a paper towel. Thorough washing is the only way to remove any surface dirt or chemical residue from any fruits or vegetables before eating.

If you still cannot bear the thought of eating fuzzy skin, then why not eat a nectarine instead? Although nectarines tend to be smaller and firmer than peaches, they are still a peach. The genes of the nectarine are almost identical to those of a peach; it is just that nectarines have a recessive gene which gives them lovely smooth skin instead of fuzzy.

From Tree to Table

The peach tree or Prunus persica is a member of the rose family, along with apricots, plums, cherries and almonds. The name persica arose as when peaches first arrived in Europe, people called them Persian apples, as they thought the peach was a native fruit of Persia (now Iran). 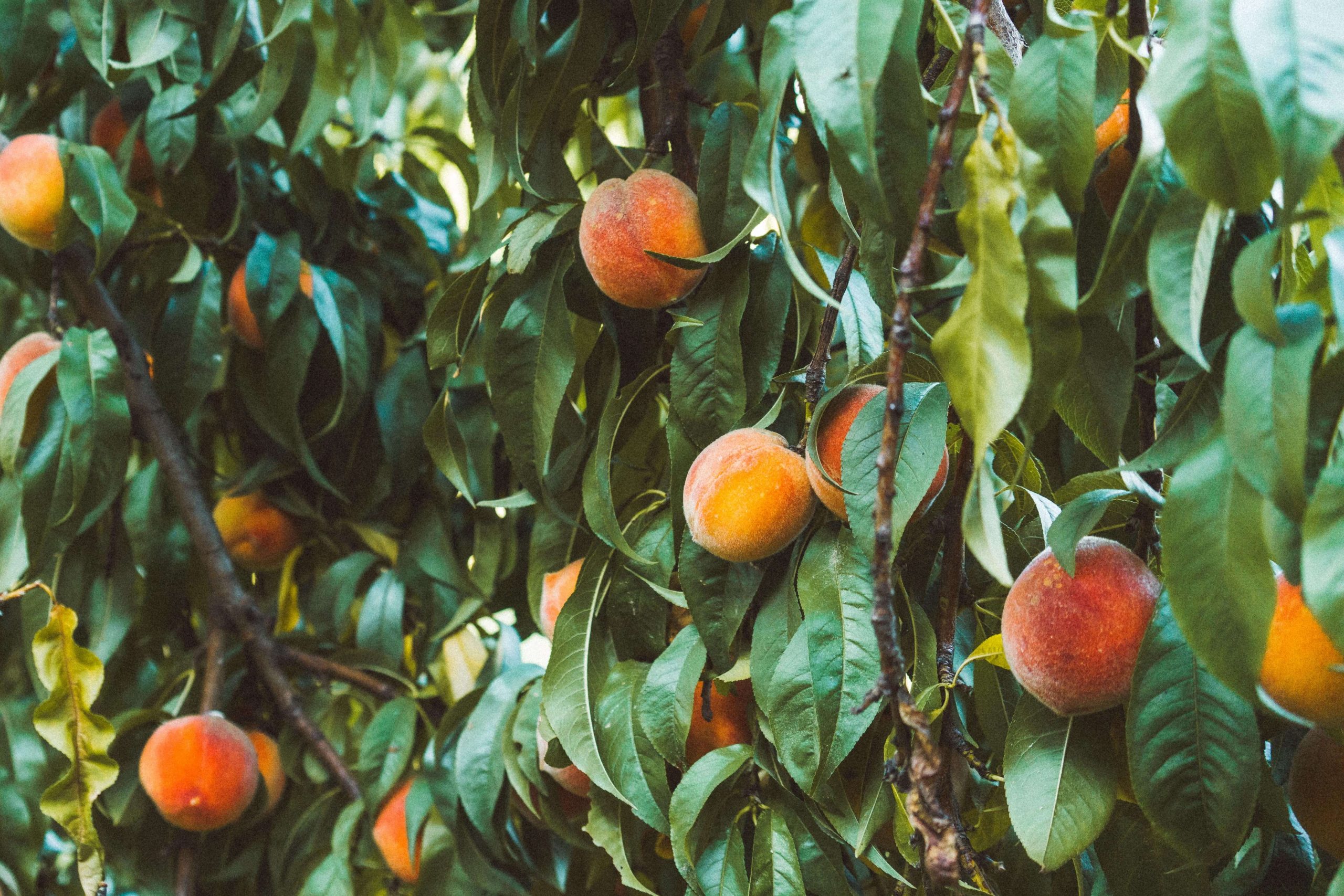 Peach trees grow in warmer regions and tend to grow better on well-drained sandy soils or gravely loams. They are usually fed with a nitrogen-rich fertilizer and are pruned annually to keep them shorter and allow the tree to spread wider, which allows it to have better access to sunlight. They do need some chill during winter to force them to blossom in spring, but peach trees cannot survive where winters are more severe.

Originating in China, peach trees may have first been cultivated there 8,000 years ago. From China, they spread across Asia and into the Mediterranean. Peaches were taken to the New World by Spanish explorers and from around 1600 onwards, peaches began to be grown in Mexico.

Peaches were once a luxury only eaten by rich people, and cultivation of them largely took place in the gardens of these nobles. It was only in the nineteenth century that peaches began to be cultivated in the US.

Nowadays there are over 2,000 varieties of peaches and China is the top global peach producer, followed by Spain, Italy and the US.

Even though Georgia is the Peach State and grows around 130 million peaches a year, it is actually California that produces around 50% of the US’s annual peach crop. South Carolina and New Jersey are also larger producers and, joined by other states, this brings the total to 20 states that now commercially produce peaches. In 2017, we produced 690,100 tons of peaches with a value of $599 million. 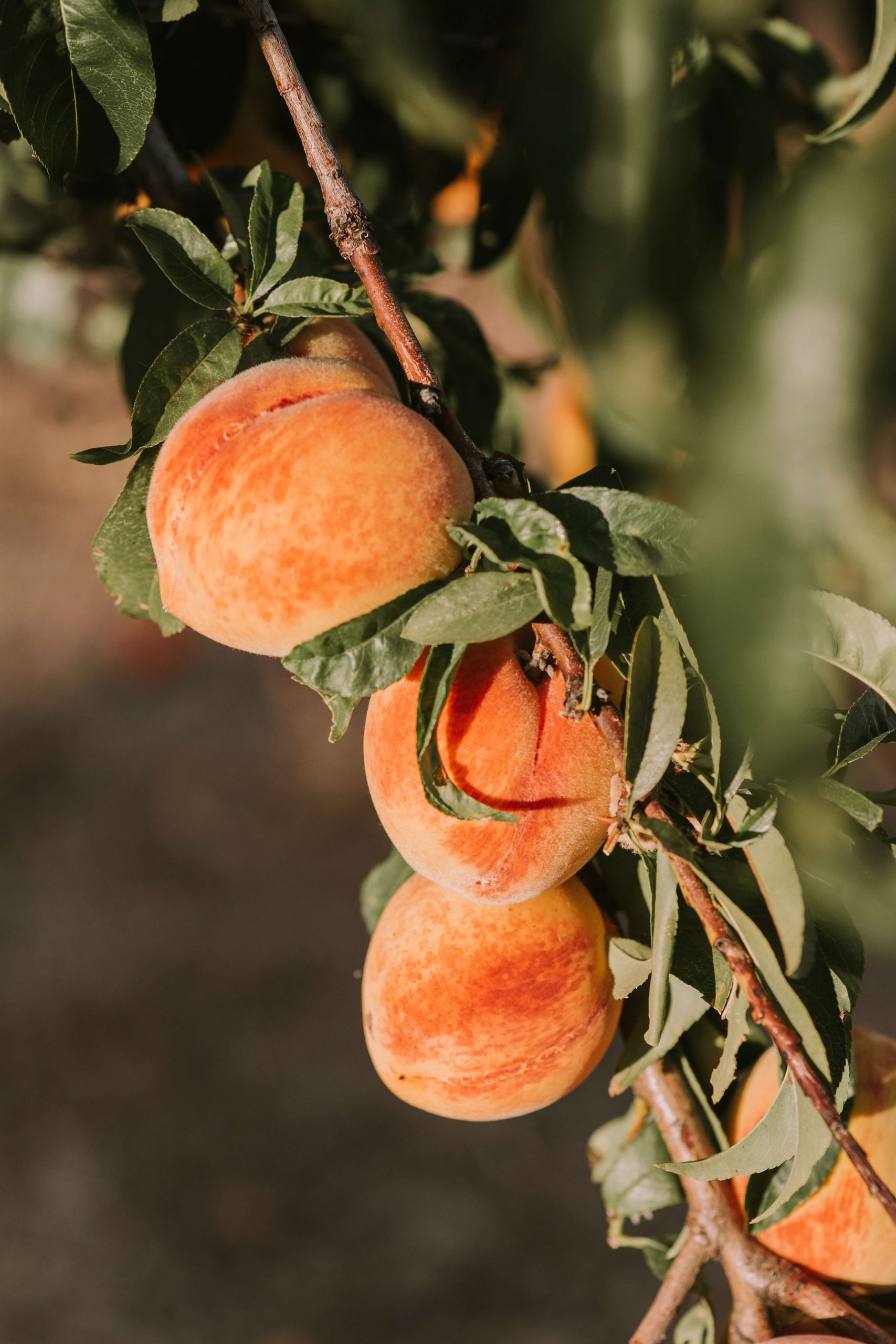 Peaches are either clingstones or freestones. A clingstone variety is one in which the peach flesh is attached to the pit, while a freestone variety is one in which the flesh is easily separated from the pit. Freestone peaches are better for eating as is, grilling or even freezing, while clingstone are good when canning or baking. The color of the peach skin has no impact on its flavor, the flavor is determined by the variety of peach. 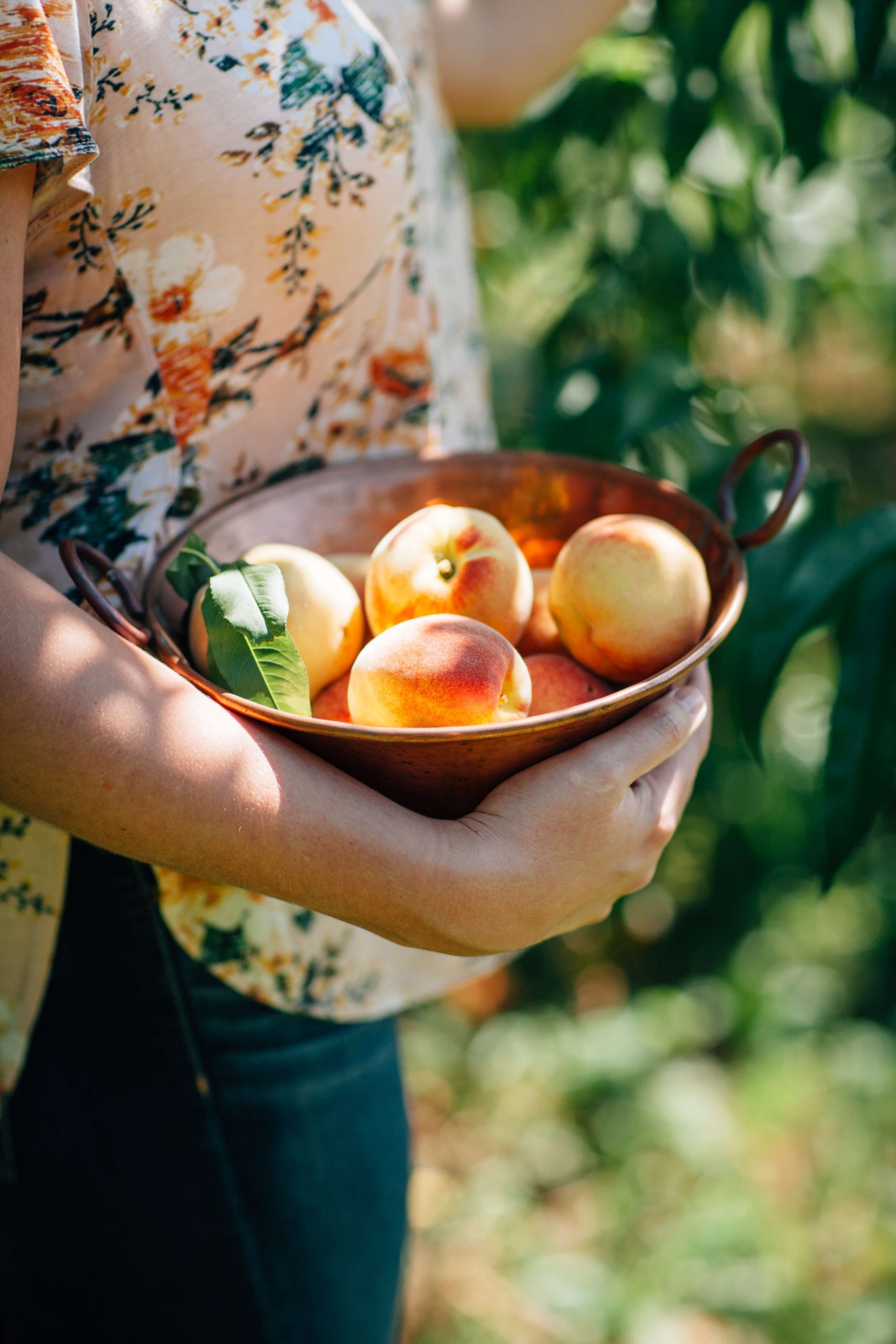 Harvesting peaches usually begins around mid-May in the south and runs through until the end of August. It can be a slightly different season in other states. It takes around three days from the moment a peach is picked for you to be able to pick it up in a grocery store.

Peaches are handpicked and as soon as they are picked, they go through a hydro-cooler or ice bath to lower the temperature of them. This is able to delay further ripening so that there is time for them to reach grocery store shelves in good condition.

One day after hydro-cooling, peaches are cleaned, de-fuzzed and graded. Finally, they are passed through an electric sizer and packed for shipping to stores.

After you buy (or pick) peaches, they are best left to ripen naturally at room temperature, but if your peaches are on the firm side, then you can pop them on a sunny windowsill or in a paper bag with an apple or banana for a day or so. White flesh peaches can be naturally firmer than yellow flesh peaches.

When peaches are ripe, they are ready for eating as is, being cooked or frozen. Ripe peaches should smell sweet, or like they will taste, and usually have a little give when pressed. The crease of a ripe peach should also be well-defined. Near the stem end, their background color should be amber or yellow hued rather than green tinged. If you are unlucky to have some peaches that were picked when too green, these will not ripen and if they have also been refrigerated, they will turn mealy.

Try and store peaches resting on their shoulders and not touching each other. Ripe peaches can also be stored in the refrigerator for a couple of days to help stop them over-ripening. If you want to freeze peaches, then peel and slice them and lay them on a baking tray in the freezer for a few hours. Once frozen you can transfer them to a container or Ziploc bag. They will keep for at least six months.

To date, the largest peach weighed an amazing 1 lbs. 12 oz and was harvested in British Columbia, Canada in 2016. The Peach State is the leader in the peach cobbler stakes though - the world’s largest peach cobbler, measuring 11 ft by 5 ft is made in Georgia every year!

Peaches are also symbolic in some cultures. In Chinese mythology, the peach is an emblem of the god of longevity, Shou Xing, and in Korea, peaches are thought to have the power to drive away spirits.​ 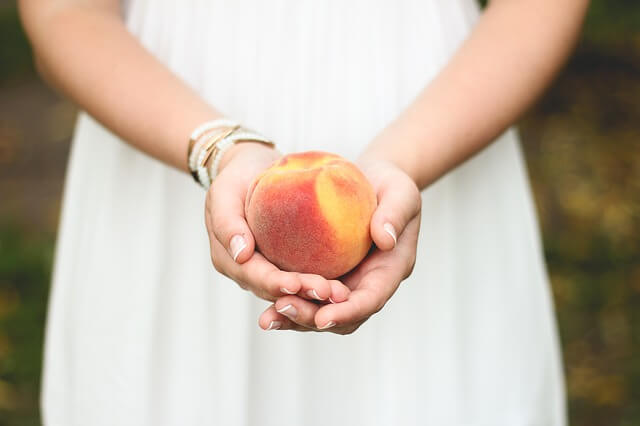 In Hungary, peaches are considered to be a calming fruit, promoting better sleep and ease stress.

Peaches with yellow flesh are naturally more acidic, and their natural tartness reduces as they begins to ripen and soften. White flesh peaches taste sweet even when hard and they are less acidic than yellow peaches.

Yellow peaches can be better for baking with as they do tend to give more of a ‘peachy’ flavor, but either color can be used interchangeably in recipes. 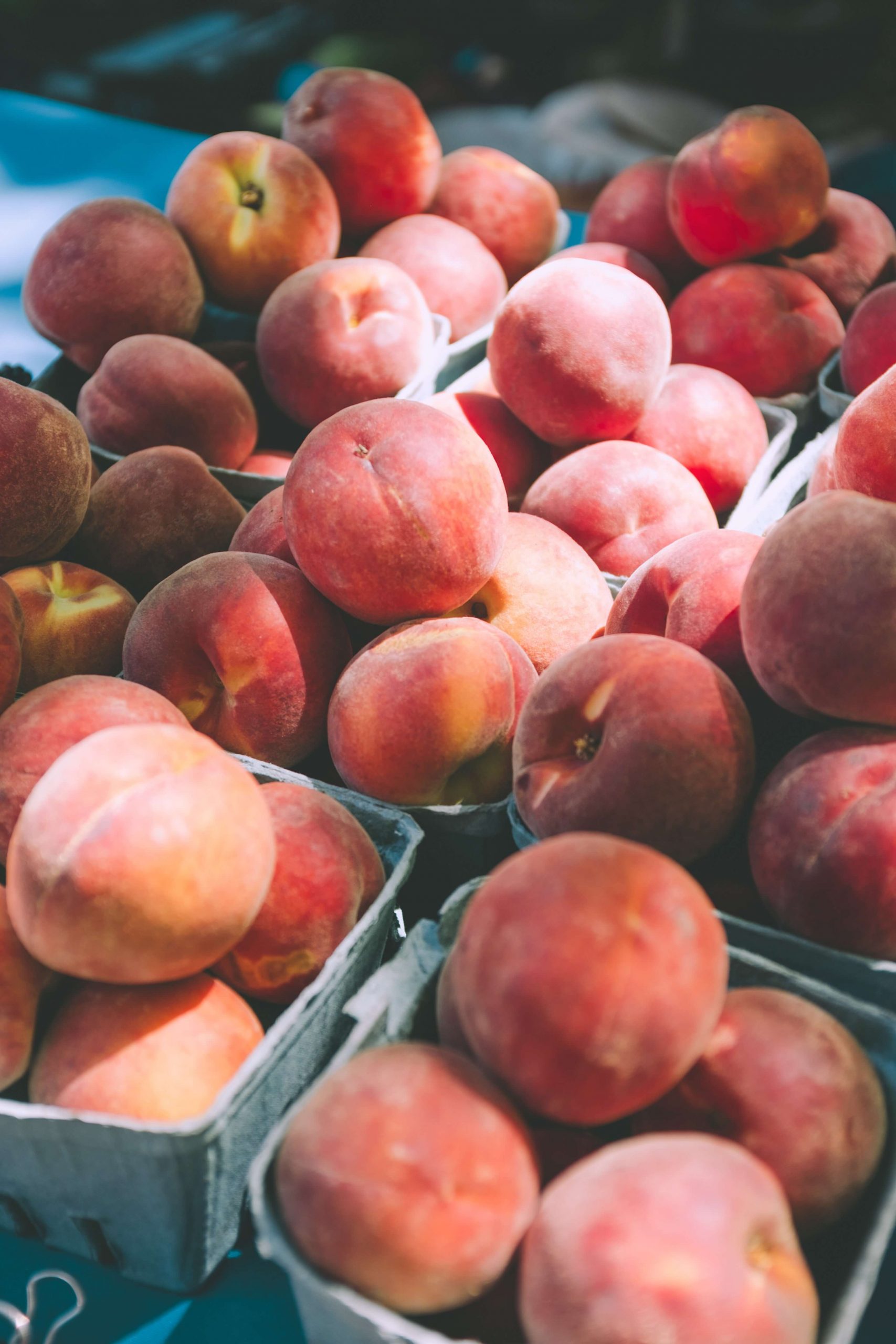 Saturn or donut peaches are flatter peaches. Once rarely seen, donut peaches are now quite common. These are actually wild peaches descending from wild pan tao/peento peaches in China. First introduced to the US around 150 years ago, Saturn peaches were intended for home growing. They then came to the attention of a Washington produce company who started to sell them and actually trademarked the Donut name for them.

After the license expired around 20 years ago, more farmers began to grow Saturn peaches and to date there are around 20 different varieties of these in the US.

Saturn peaches are usually sweeter than other peach varieties and have hints of almond in them. They are also less acidic than other peaches, can have less juice (less mess) and the pits can be easily popped out. Perhaps, more importantly, for those of you who struggle with peach skins, the skins on Saturn peaches have very little, if any, fuzz! 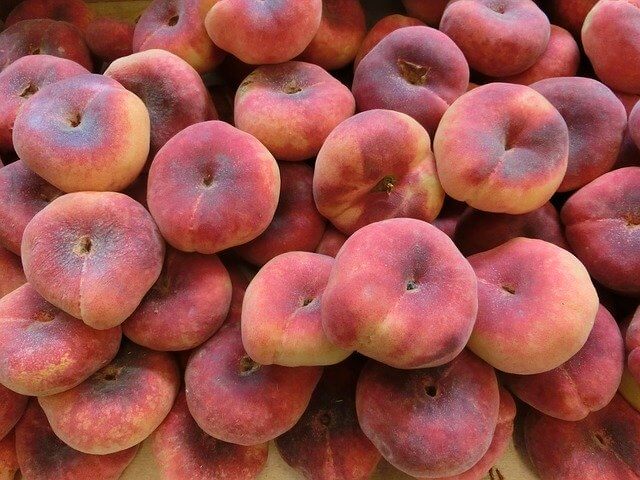 It has to be said that peaches are far from a superfruit in terms of their nutritional value; although they provide between 13.3 and 14.8% of the recommended daily allowance (RDA) of vitamin C for adult males and females. 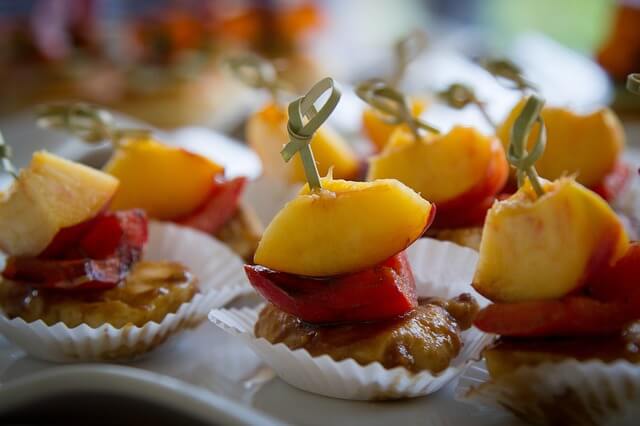 As we cannot make or store vitamin C in the body, we have no choice but to get it from our daily diet. Vitamin C is essential for the growth and repair of many tissues within the body; including skin, bone, cartilage and more. It also plays an important role in helping combat free radicals in the body; the molecules that are key in the aging process and are linked to many disorders such as diabetes and heart disease. Vitamin C also helps our bodies to absorb dietary iron better, helping reduce the risk of developing anemia.

Peaches also contain other antioxidant molecules, such as flavonoids, that are linked with a reduced risk of heart disease, degenerative diseases, cancers and even macular degeneration.

A cup of diced peaches can also provide 7.5% or more of an adult’s recommended daily fiber intake, but it is worth knowing that the best source of fiber (and some of its other nutrients) in a peach is that fuzzy skin!

Lower in protein also, a cup of diced peach provides 1.53 grams of protein, 65 calories and around 14 grams of sugar. Peaches do not contain any saturated fat or cholesterol. 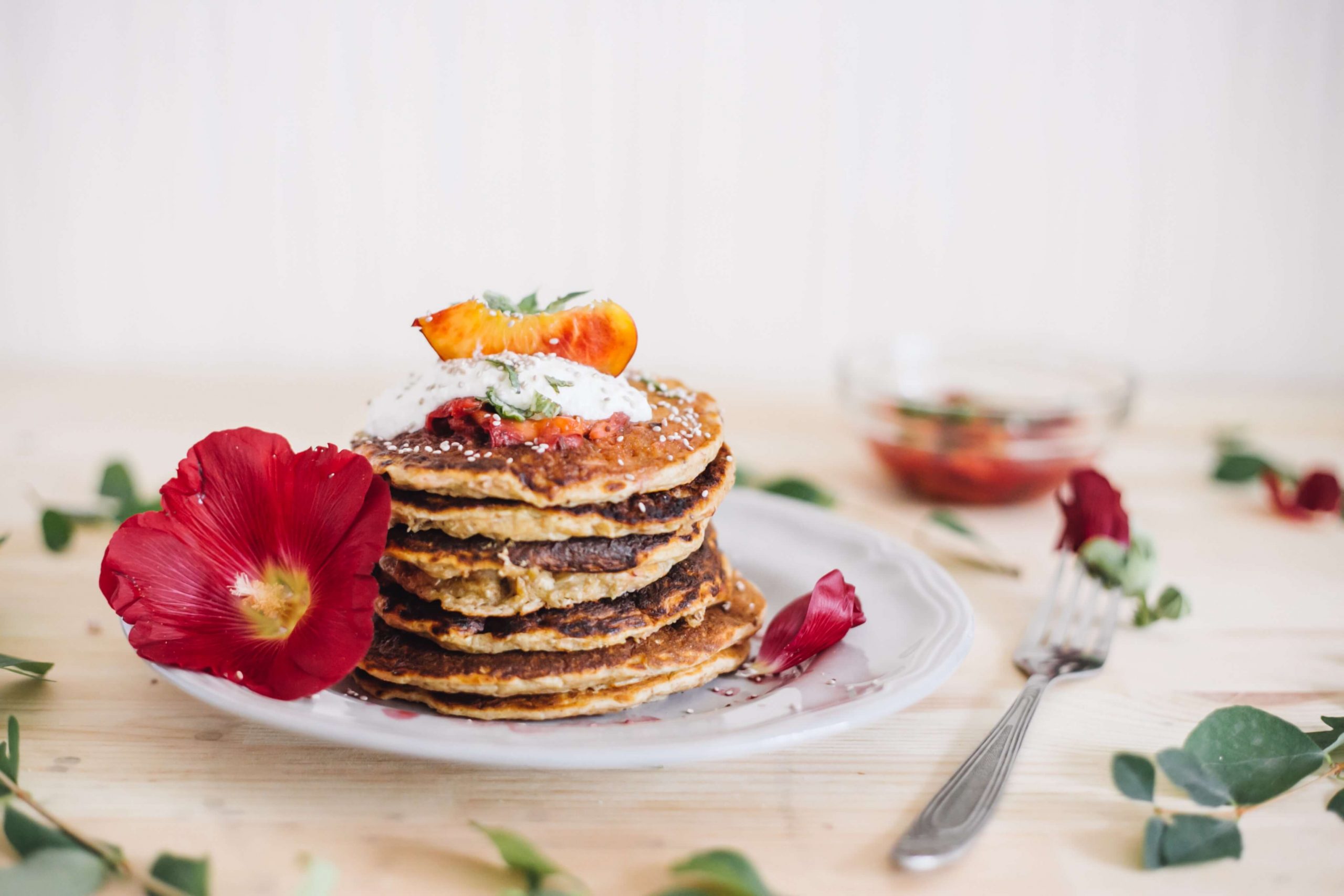 Ways to Use Peaches

Peaches are great for topping your pancakes and waffles, or you can add them to your oatmeal. For a fast and tasty dessert, you can bake peach slices with cinnamon and a little honey.

Peaches also taste good in summer salads with a little balsamic dressing and if you really want to avoid biting into the skin, then why not blend skin-on peach slices and make smoothies or frozen yogurt? 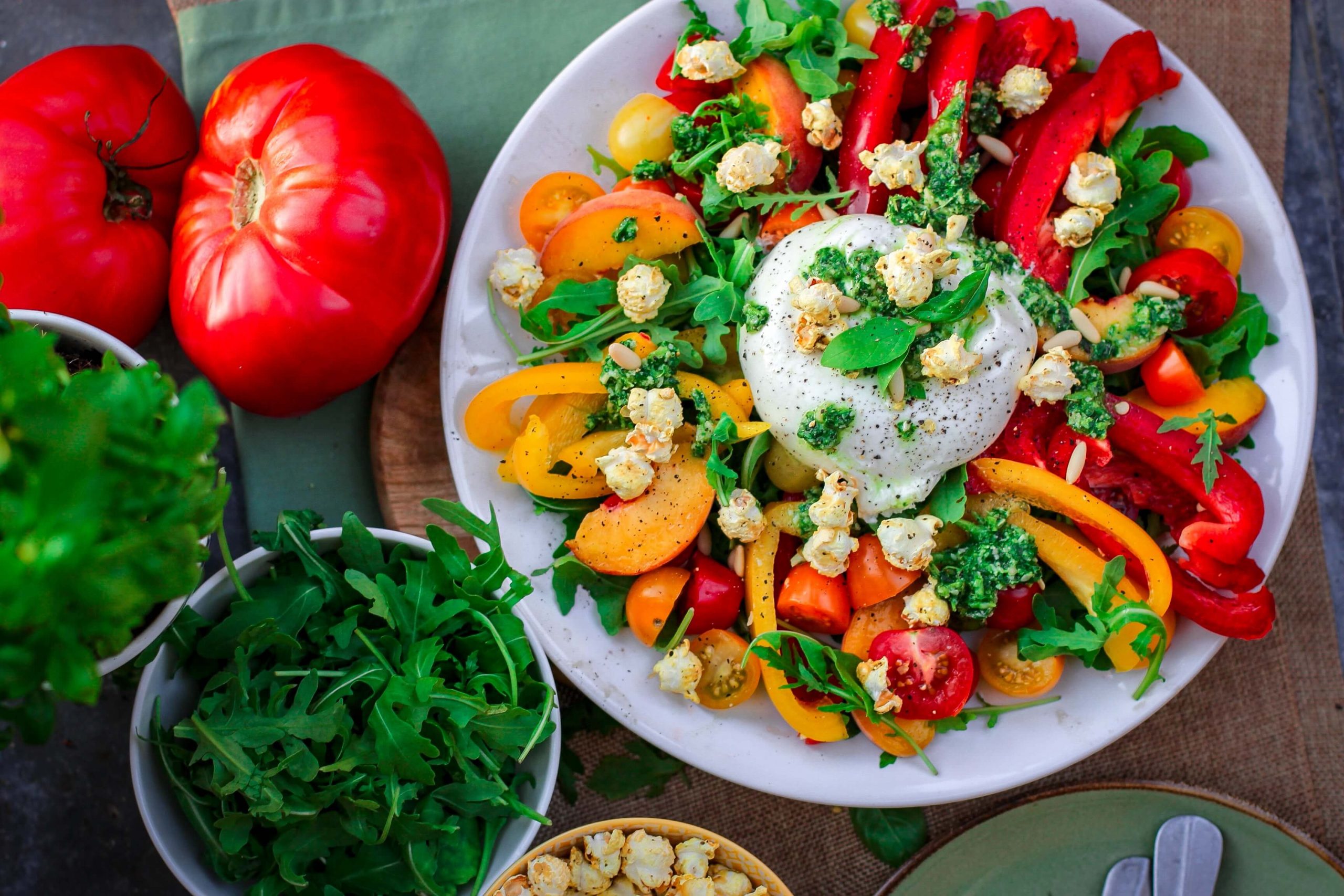 Although peach skins are nutritious, they can toughen a little if you are cooking them, so if you do want to remove the skin first, then blanch the peaches in boiling water for one minute and then move them into cold water. This should allow you to then take the skins off easily.

Once you have cut into a peach, it will start to brown, so it should be eaten or cooked straightaway. If you want your peach to hang around a little longer, then you can dip them in citrus juice or pineapple juice to slow down the browning.

If fresh peaches are not available, then either frozen or canned are able to replace fresh in the majority of recipes. Do keep an eye out for the extra sugar in canned peaches though; you will need to reduce the quantity of sugar added to the recipe, or if you want to keep excess sugar down, then use peaches that are canned in water.

At the end of the day, whether you choose to eat the skin on peaches is purely down to you. Peaches do have a fully edible skin so if you would like to obtain some of the nutrition within the skin, then cooking or baking peaches is one way to leave skins on, or you could just add some to your blender and serve them up in a smoothie. The other way to avoid peach skin is to buy nectarines instead. Offering all the nutrition and taste of peaches but, without the fuzz! 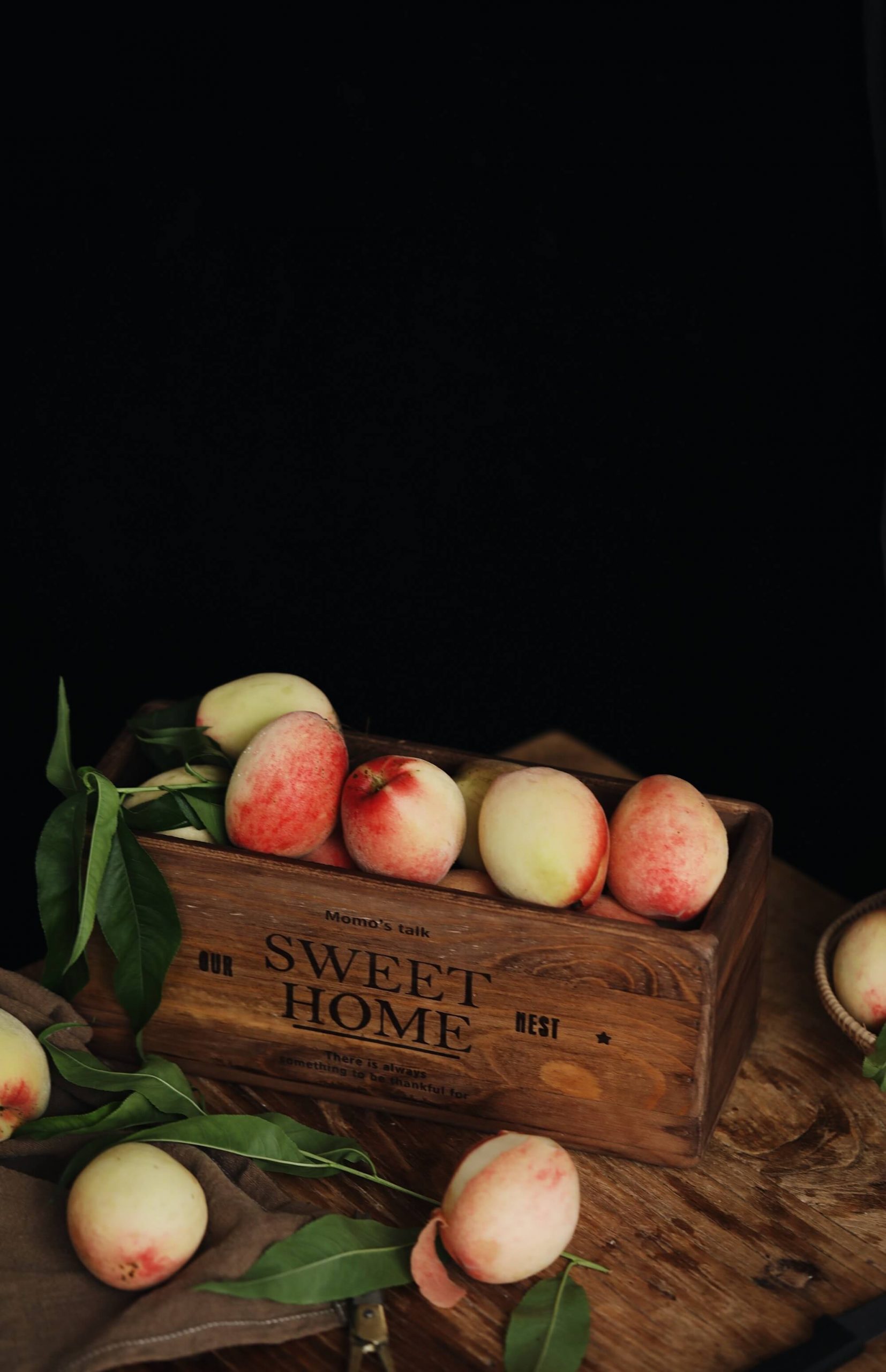