If you enjoy matcha green tea and want to enjoy a cup on the move, then continue reading this Pique matcha green tea review. In this review, I put Pique ceremonial grade matcha through its paces over a two week period to not only see how easy it was to enjoy a cup of high quality matcha on the go, but also if it was able to provide me with energy and focus.

Get 8% Discount on Pique Tea Here!

Who Should Buy Pique Matcha Sticks?

If you already enjoy green tea or matcha and want to experience a high quality matcha with purported health benefits, then Pique Sun Goddess matcha will be for you. If you want matcha just to add to your smoothies or baked goods, then this matcha is not the best choice, unless you really do want the added value of a ceremonial matcha in your cakes or smoothies.

As this matcha comes as ready packaged sticks to add to warm or cold water, it is also perfect for taking on your travels so that you can enjoy a cup of matcha wherever.

As a ceremonial grade matcha, it is made from the youngest tea leaves that have had veins and stems taken out so that the matcha has a smooth texture and flavor. Ceremonial grade matcha is always best used for drinking as is or in tea ceremonies, rather than using for smoothies or baking.

Pique matcha is also PALEO and KETO certified, making it suitable for a range of diets and lifestyles and is supposed to provide its drinkers with energy, focus and clarity and may also support digestion and immunity.

Where Can You Buy Pique Matcha?

Pique matcha is available online at piquetea.com . As a ceremonial grade matcha, this is not the cheapest of the green teas and if you do want to drink it daily, then consider buying some of the bulk packs available on the Pique website as these do offer some discount for bulk buying.

There is also a money back guarantee which you can use to return any unused cartons within 30 days if you are not happy. There is no shipping cost on this either.

Get 8% Discount on Pique Tea Here!

How Are Pique Matcha Sticks Packaged?

The box of Pique matcha sticks arrived in a recyclable brown card postal and presentation box and the box containing the matcha green tea is also recyclable. 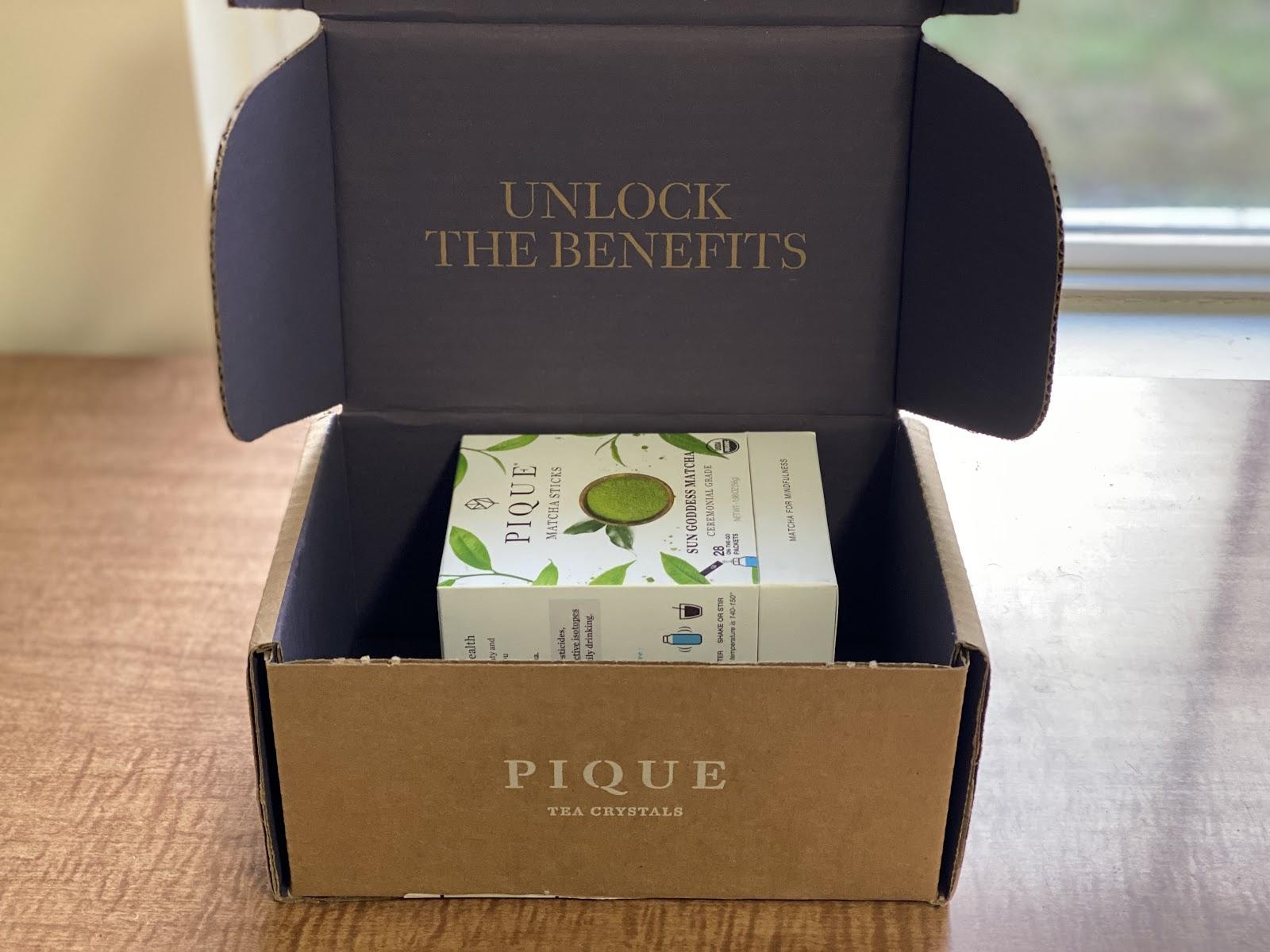 The box is designed so that once you unseal it and remove the lid, the base will stand on the countertop, making it easy to grab a stick to brew at home, or a few to take out to work with you. 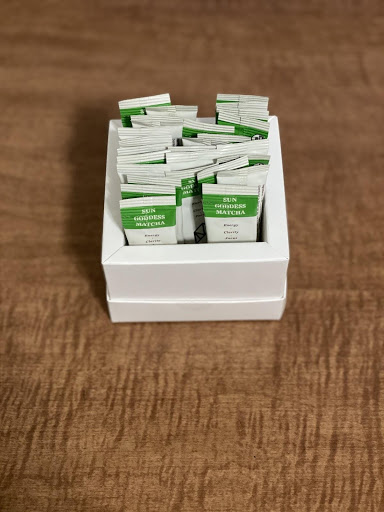 Each box contains 28 sticks that are paper wrapped, so all the packaging on this matcha, except for the sticker seals, is recyclable – which for me is always a bonus!

As you can see, the matcha box is also labelled with its USDA Organic, KETO and PALEO certifications. 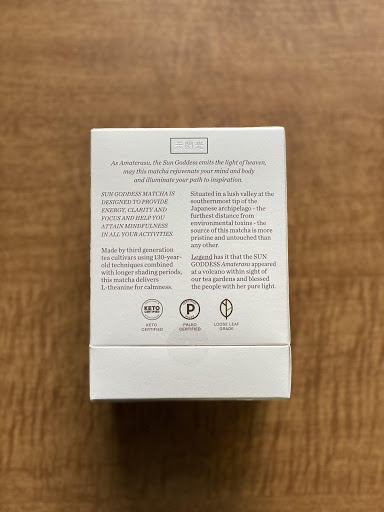 Because this is a ceremonial grade matcha, when you open a stick, you can see how vibrant its color is and just how fine it has been ground. 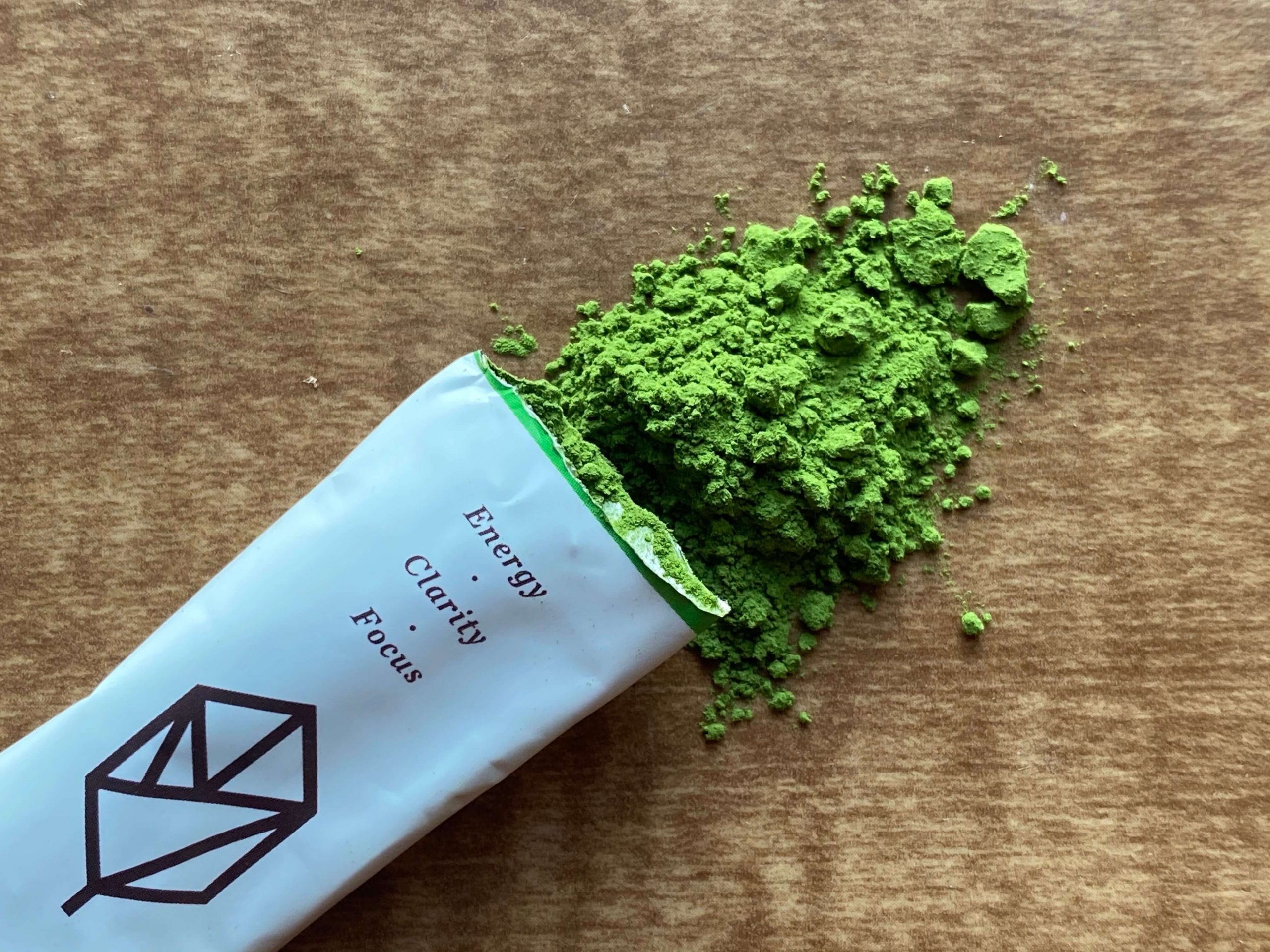 How to Brew Pique Matcha

One stick should be added to up to 12 oz of cold water, or up to 12 oz of warm water at a temperature of between 140°F to 150°F. As this brews at a lower temperature than I would usually brew green teas at, I found it easier to boil the kettle first, add boiling filtered water to the three quarter mark of the cup and then top it up with cold filtered water. This was enough to bring the temperature down to the best range recommended to brew the matcha without me needing to stand over the kettle with a meat thermometer in hand!

Once you open the stick and add the matcha to the warm water, it needs to be stirred until dissolved. You can also brew it cold in a bottle or shaker, so you can just replace the lid and give it a good shake before drinking. Unlike some other matcha green teas, this matcha does dissolve very easily to give a lovely smooth brew. When I first tasted it, I found it did not seem to have as much earthiness to it as some matcha can have. 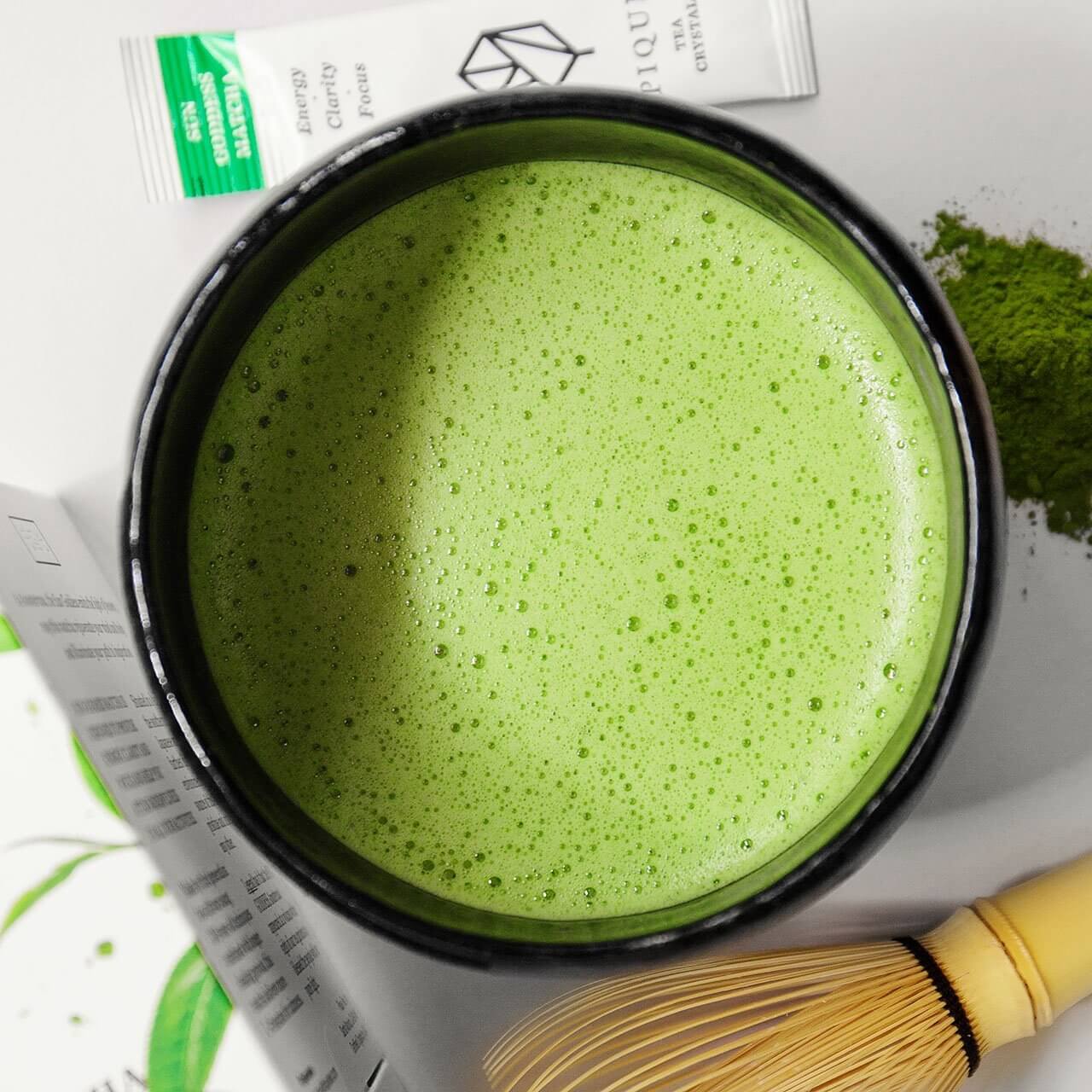 For me, it was a big advantage that it can be brewed in a cup or shaker rather than needing to brew it traditionally in a chawan (matcha bowl) with the whisk (chasen) and more. Although it is nice to enjoy matcha brewed traditionally, it is just not practical when you are in a rush or would like to enjoy an afternoon cup sat at your desk.

This is a USDA certified organic matcha which as a matcha drinker, you may already know is more difficult to find as many tea fields in Japan are fertilized traditionally with fish meal or other fertilizers prohibited by the USDA for organic produce.

Pique matcha is a good source of polyphenols. These are molecules which have antioxidant activity. As well as helping prevent against damage by free radicals in the body, they can help relieve digestive issues and bloating as they have been shown to support gut microbiota (the bacteria that lives in the gut and aids digestion) and can help relieve inflammation in the gut which can contribute to digestive problems. 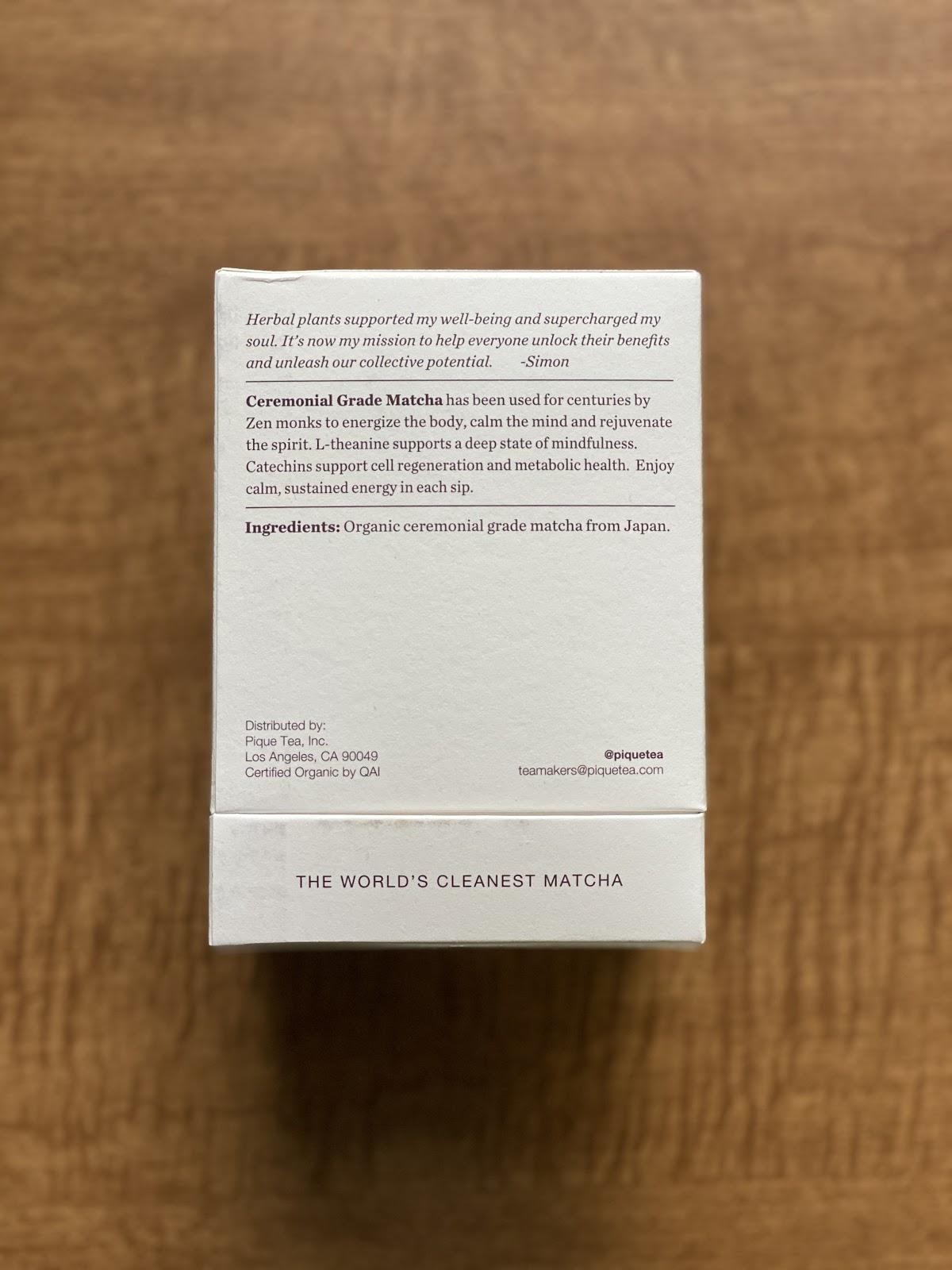 Polyphenols are also linked to support of a healthy immune system as they are natural molecules that can help promote immunity against pathogens. They may also help provide support to the immune system in those who suffer with allergies.

Pique matcha green tea is also a source of L-theanine and because the tea is shaded for 35% longer under shade cloths before harvesting, this causes thinner and wider tea leaves to develop which contain more L-theanine. The longer shading time of the leaves also contributes to the rich umami flavor of the matcha.

L-theanine works to help us relax without making us drowsy and in fact some studies have shown that it can reduce both anxiety and stress which can occur in stressful situations. When L-theanine is combined with caffeine – naturally in teas – it also seems to promote mental focus and alertness.

Matcha tea also contains catechins and along with the stimulant caffeine, are linked with weight loss. One catechin, known as EGCG or epigallocatechin gallate, is a metabolic booster for some hormones such as norepinephrine which works as a fat-burner in the body.

Because EGCG can stop norepinephrine from being broken down by a certain enzyme, it means there is more norepinephrine available to break down fat in the body. Once the fat is broken down it can then be used by cells as an energy source.

As well as containing these health boosting effects, Pique Matcha sticks are also free from any sweeteners, preservatives or other additives.

Keeping with the recommendation from Pique to drink two to three cups a day in the morning and/or the afternoon, I first tried drinking one cup in the morning and one in the afternoon. Unfortunately, I did not find my morning cup as mentally beneficial, perhaps because that is the time of day when I am already at my best and work out. 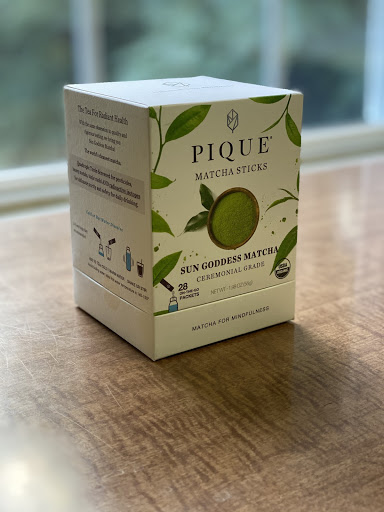 So instead, I switched two cups to the afternoon, using them as a replacement for afternoon cups of coffee. I had a cup of warm matcha an hour or so after lunch which is suggested by some to be the ideal time for help with weight control and I had then had my second warm cup later in the afternoon when I started to slump. It did seem to help me stay focused and alert, while still feeling calm. And, although matcha does contain caffeine – around half the amount of a regular cup of coffee - I didn’t seem to suffer from caffeine jitters with matcha in the way that I sometimes do with coffee!

By the end of the first week of drinking Pique matcha, I did start to feel more like I had undergone some minor detox in that I felt like I had more energy and my gut was feeling healthier and less prone to bloating.

When I had finished the box at the end of the second week, I definitely felt more focused yet calm in the afternoon and seemed to want to snack a little less in the afternoon as well. Even though I do have quite a controlled diet because of some food allergies and intolerances, I also found I suffered less bloating over the two weeks and my gut felt more settled.

How Safe Is Pique Matcha?

This Pique matcha green tea is advertised as the world’s purest matcha because it is the first matcha to be quadruple screened. This matcha goes through a three layer process, where the first screening is done by a third party laboratory using the raw materials, the second screening takes place in-house once the raw materials are brought in and the final screen takes place by a third party lab once the tea has been extracted.

The matcha is screened for pesticides prohibited by the USDA and is also screened to European and Japanese organic standards. The heavy metal screening checks for traces of lead, mercury, chromium, arsenic, aluminum and nickel and it is also checked for aflatoxins and other types of molds common in tea. There is also an additional test for any radio isotopes (radioactive materials) although this matcha is sourced from Kagoshima, high in the mountains and away from radiation and industrial pollution sources.

Usually, I do only drink matcha at home and not every day, but after trying this out for this matcha green tea review, I would definitely consider continuing to drink it every day as it did help me to focus and seemed to give me more energy.

I also found I was less likely to snack in the afternoon and my gut seemed more settled and less bloated. I guess other matcha drinkers may find they obtain even more benefits when they start drinking it daily, depending of course on their health and wellbeing at the start.

A big plus for me was that these sticks need little mixing and can be drunk hot or cold and, on the move, and that they have been screened for radiation as well as toxins.

Unfortunately the cost may prevent some people from drinking this matcha daily and I do think after drinking it for two weeks, it is definitely better than just drinking matcha as and when, which is what I tended to do. You can reduce some of the cost though by buying it in larger packs from piquetea.com , but even then, you will still need to take out a subscription to reduce the shipping costs.

Although a caffeine addict, Wyatt prefers tea instead of coffee! After he finished college, Wyatt spent time volunteering out on an organic tea plantation in Nepal where sustainability of farming practices is key. This experience helped him develop his true passion for anything tea-related and how as a society, we can help promote sustainability in farming. He is currently working in a specialty tea store where he gets to try out new teas and create new blends!

Although a caffeine addict, Wyatt prefers tea instead of coffee! After he finished college, Wyatt sp...