Gyro and shawarma are both street foods deriving from Turkish Kebab Doner and are marinated fattier meats slowly spit roasted and served either directly on a plate or a flat bread. Although they can look similar, the main differences between gyro and shawarma is that gyro is Greek and shawarma is Arabic, thus both are seasoned and garnished very differently.

Just What is Gyro?

Gyro (pronounced ‘yee-roh’) is typically made from ground fatty pork in Greece or more frequently, lamb, beef or a mix of both in the US. The ground meat is tightly packed and seasoned with oregano, rosemary, marjoram and thyme before being placed on a vertical rotisserie (spit roast) and slowly cooked.

Cooking meat in this way allows the meat to cook in its own fat which makes it very succulent. In fact, the name gyro comes from the Greek ‘gyros’ which means ‘to turn’. 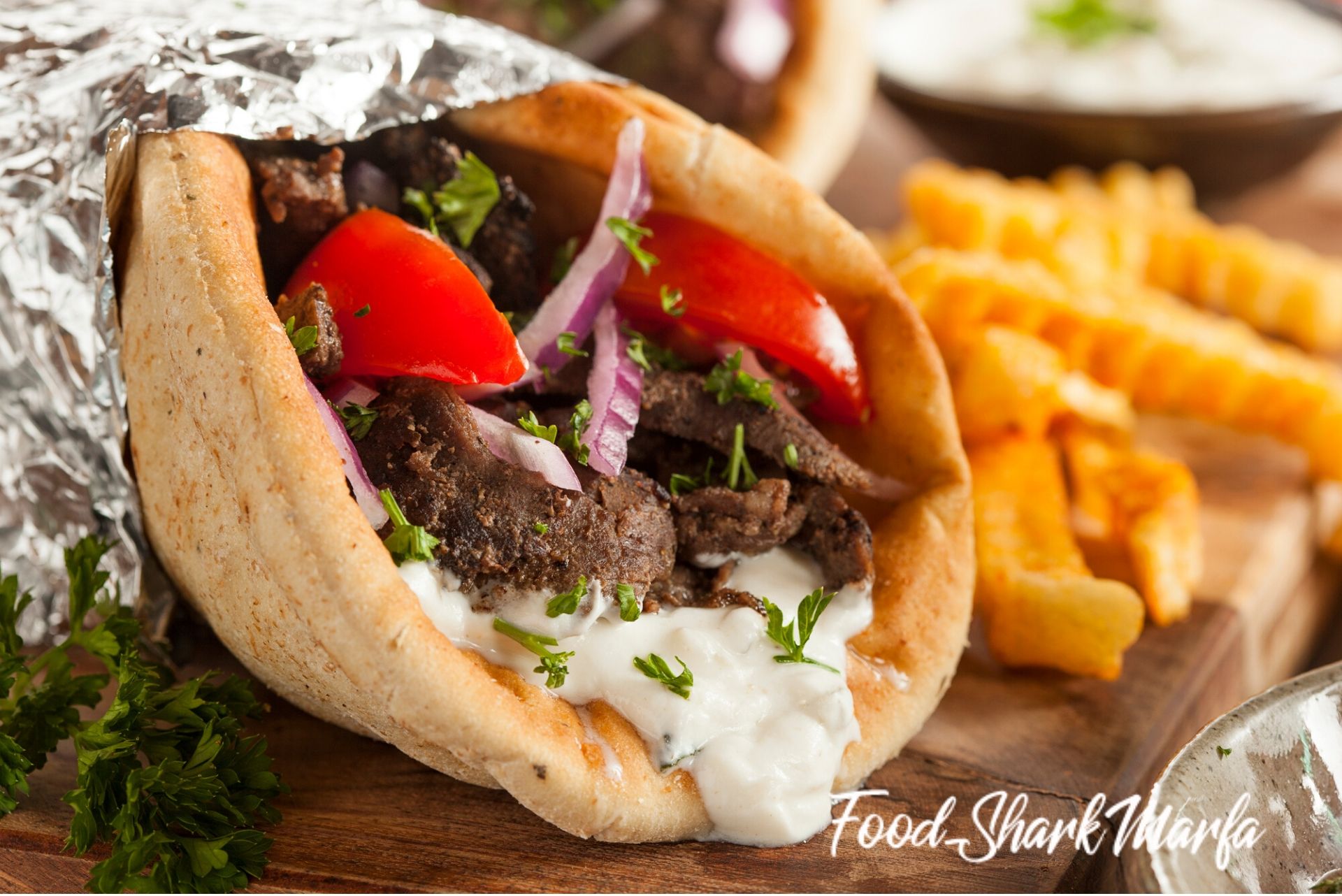 The cooked meat is thinly sliced and served on a lightly grilled and oiled pita or a thinner gyro bread with lettuce, cucumber, onion and tomato and topped with tzatziki, a garlic yogurt with dill and cucumber. In northern Greece, it may be garnished with mustard or ketchup instead of tzatziki. Once everything is on the pita, it is rolled and wrapped, making it the perfect street food - able to be eaten on the move by those who do not have time to sit down to a meal. 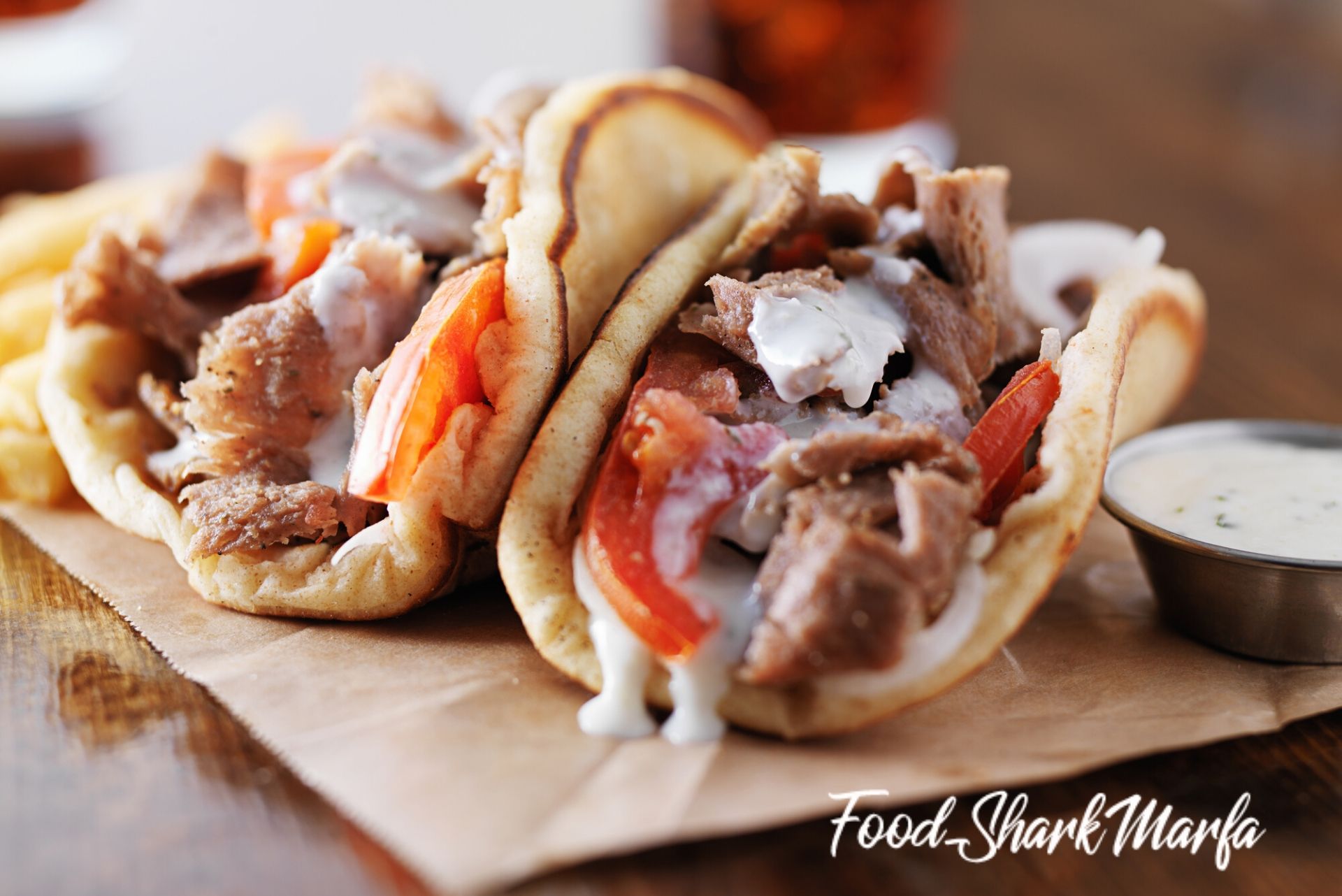 When refugees arrived in Greece from Istanbul and other parts of Turkey in the earlier part of the twentieth century, they brought their recipes with them and soon started to open small shops and food stalls that sold gyro. As immigrants from Greece then moved to other countries after the Second World War, the gyro went with them.

A Greek donair is like a gyro but frequently served with a sweet garlic sauce in place of tzatziki.

If you want to make gyro at home, you can rub a mix of oregano, marjoram, rosemary, thyme, cumin, salt, ground pepper and garlic into a fatty meat of your choice. Leave the rub to soak in for a couple of hours and then chop the meat well, preferably with a food processor. You will then need to pack the ground meat into a loaf pan and then add some boiling water. The meat can then be baked like a standard meatloaf at 350°F for an hour or so, or until cooked properly in the middle.

Once cooked, the meat needs removing from the loaf pan and slicing thinly. You can then add it to a pita or flat bread along with hummus, tomato, lettuce and tzatziki.

Both gyro and shawarma are traditionally made with fattier cuts of meat as lean cuts do not have enough fat to make the meat as juicy and as tender as it should be. However, if you do make your own gyro, there is no reason why you cannot use a leaner cut of meat to cut out some of the fat.

How is Shawarma Different to Gyro?

Also called shawurma, shawarma (pronounced ‘shuh-war-muh’) is usually made with lamb, turkey, veal, beef or chicken, or a combination of any of these and is popular in Arab and Balkan countries. Unlike gyro which is seasoned with mainly herbs, the meat for shawarma is seasoned with spices such as cinnamon, cloves, turmeric, dried lime, paprika and cardamom before being grilled on a vertical spit for as long as two days. 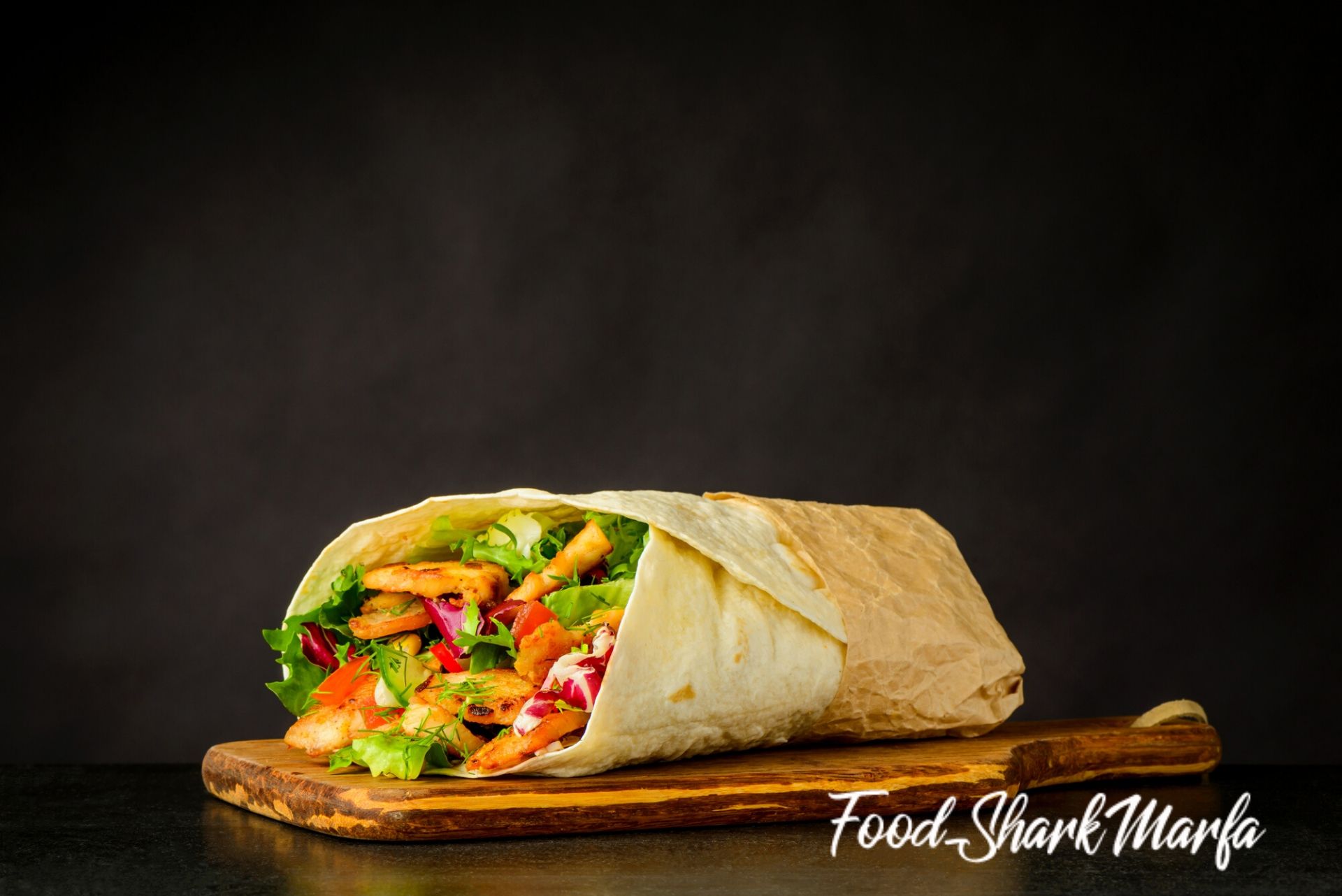 After slices of meat are shaved off, it is served with tabbouleh (a herb and bulgur salad) or fattoush (fried bread salad), or with cucumber and tomato on taboon bread as a wrap or ‘laffa’ or, on a plate.

Shawarma is typically garnished with hummus, tahini (sesame seed paste), pickled turnips and amba (mango pickle) and can also be garnished with other items such as pickled carrots, fried or mayo eggplant, spicy cauliflower and purple cabbage. 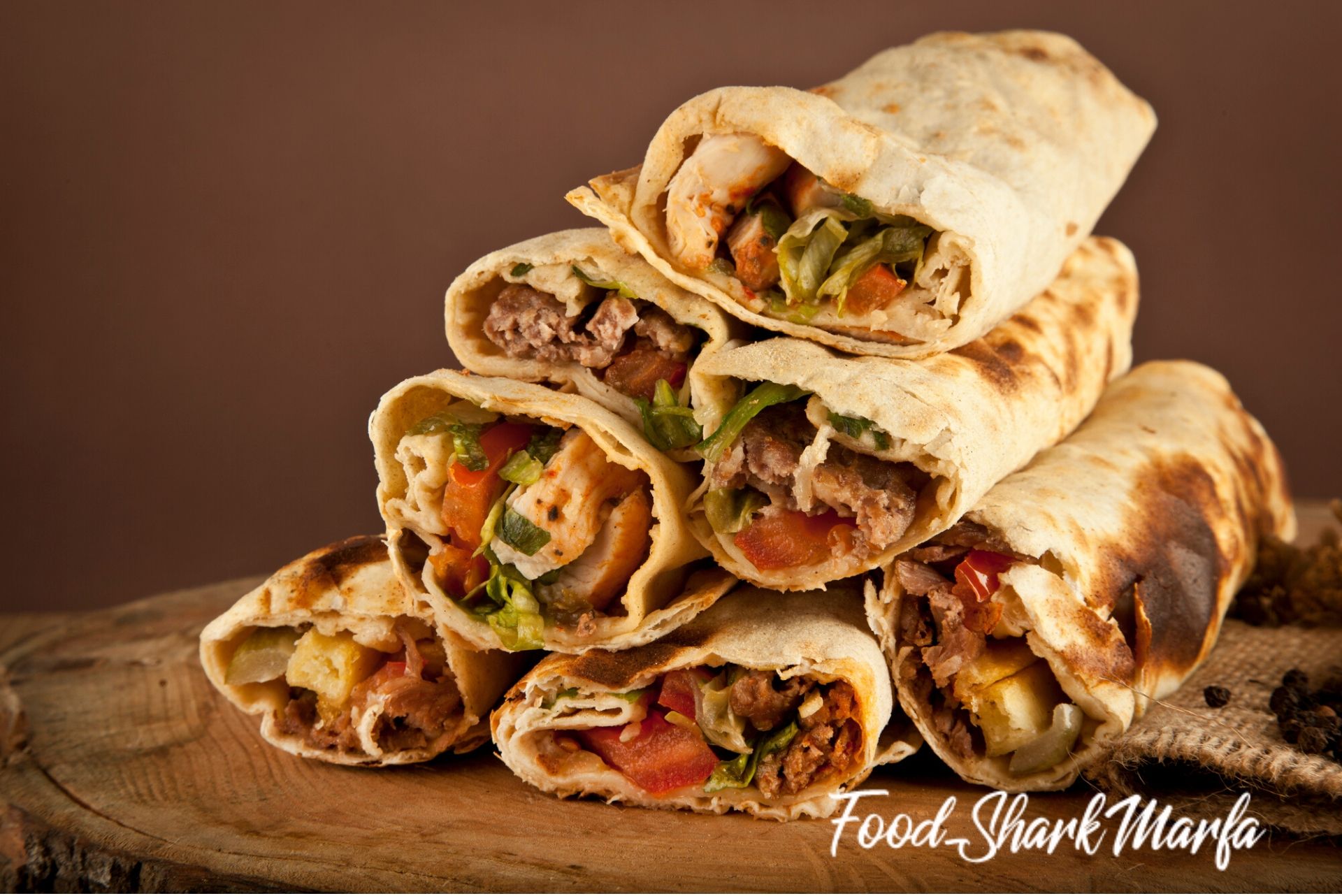 The Iskandar shawarma is the original shawarma recipe that arrived from Turkey in the nineteenth century along with the refugees who fled from Ottoman Bursa settlements into the Middle East. Originally served with pork, for religious and cultural reasons, shawarma instead had to be made with lamb, chicken or turkey, or a combination of one or more of these meats. Other variants of shawarma, such as an Israeli shawarma are often served with pickled fruits such as mango. As well as being made with meat, shawarma can also be made with fish.

Like the gyro, the name shawarma derives from the verb ‘to turn’ from the spit roasting of the meat.

You can make your own shawarma with some fresh squeezed lemon juice and half the amount of apple cider vinegar and olive oil. To the liquid, add spices such as cinnamon, cardamom, cumin, cloves, nutmeg, ginger and caraway along with salt, garlic and crushed peppercorns and mix it all together.

This shawarma spice mix can then be rubbed over chunks of fatty lamb or beef which is cut into strips of around 4" in length and ⅔" thick. The meat should be left to marinade in the refrigerator overnight. You can then use an indoor grill to cook the meat – which should take around 15 minutes or so on medium. Once the meat is cooked, add it to warm pita bread along with hummus and tahini and top with red onion, shredded carrot, shredded cabbage and pickled vegetables or pickled mango.

Is Shawarma a Kebab?

Gyro is Greek and made with ground packed lamb or beef which has been marinated with herbs such as rosemary, oregano, thyme and marjoram. After being slowly cooked, gyro is sliced and served on pita bread or a plate along with cucumber, lettuce, tomato, onion and tzatziki.

In comparison, shawarma is Arabic and can be made from a variety of meats that are seasoned with spices such as cardamom, cloves, cinnamon, nutmeg and turmeric. After cooking slowly for a couple of days, shawarma is served on pita bread with red onion, shredded carrot and cabbage, hummus, tahini and pickled vegetables or fruits.

So, although gyro and shawarma are both popular street foods which can look similar and are both made with marinated meats that are slowly cooked, there are significant differences, not least with how they are both seasoned and garnished.

Born in Illinois, Aisha was taught to cook traditional middle Eastern dishes from an early age by her family. Her love of food and nutrition continued through college where she then went on to study her bachelor’s and master’s degrees in community nutrition. She loves her job supporting folks in assisted living with their dietary needs and in her spare time she enjoys cooking Middle Eastern cuisine and tries to capture some of the many recipes that only exist by word of mouth!

Born in Illinois, Aisha was taught to cook traditional middle Eastern dishes from an early age by he...