Egg dishes are a good source of protein, easy to make and versatile, meaning they can be as basic or luxurious as you want, whether you prefer a bacon and cheese quiche, lobster frittata or a leftovers omelet! They are also easy to serve up along with fresh bread and a bowl of green salad.

Frittata and quiche are two of the more popular egg dishes and in this post, I consider the differences and similarities between the two, as well as how they compare to other types of egg dishes.

Both frittata and quiche can be described as savory custards made with eggs and a wide range of fillings, but the main difference is that a frittata has a heavier texture and does not have a crust, while a quiche is lighter in density and usually baked with a pie crust. 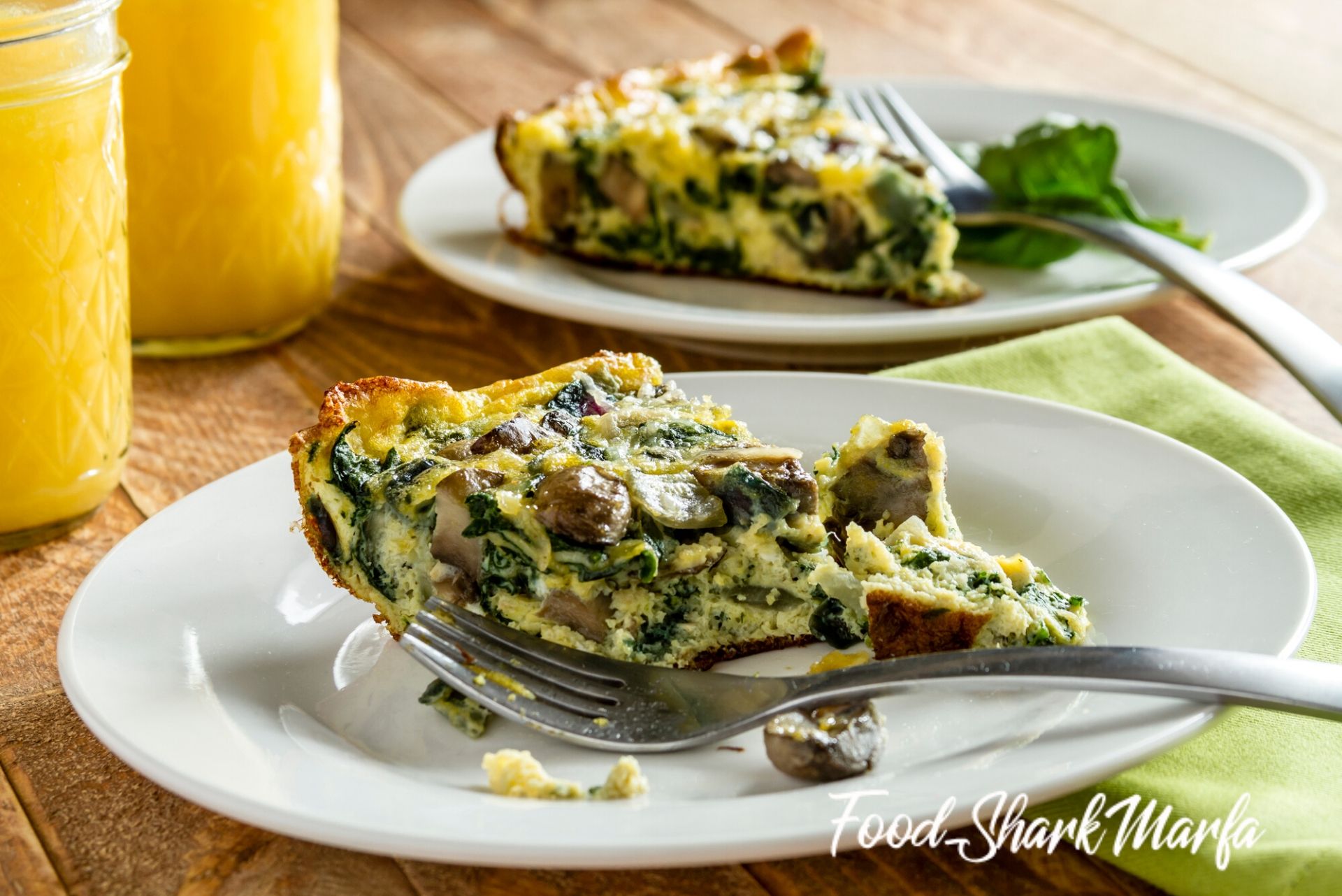 As we can see from the following handy summary of egg dishes, they all have a dairy base in common; it is often how they are cooked that makes the difference to the dish.

Perhaps the only notes of caution when making any of these egg dishes is to always use pre-cooked and/or pre-warmed meat, fish and vegetable fillings before adding because the cooking time may not be long enough to properly cook or heat them. The second note is to always use a well-oiled skillet or baking pan as fried or baked on egg can be difficult to remove from cookware.

What is A Frittata?

A frittata is an Italian-style omelet or savory custard and the word frittata loosely translates as ‘fried’, which was the term used for cooking eggs in any form on the stovetop.

Made with well beaten eggs, a little liquid (no more than ¼ cup for every six large eggs) and other ingredients such as meat, cheese and vegetables, a frittata is first cooked slowly on the stovetop until the edges of it are set and then the skillet is placed into the oven to complete cooking on both sides.

A frittata can also be started on the stovetop and finished off under a broiler as this also allows both sides to be set/cooked. 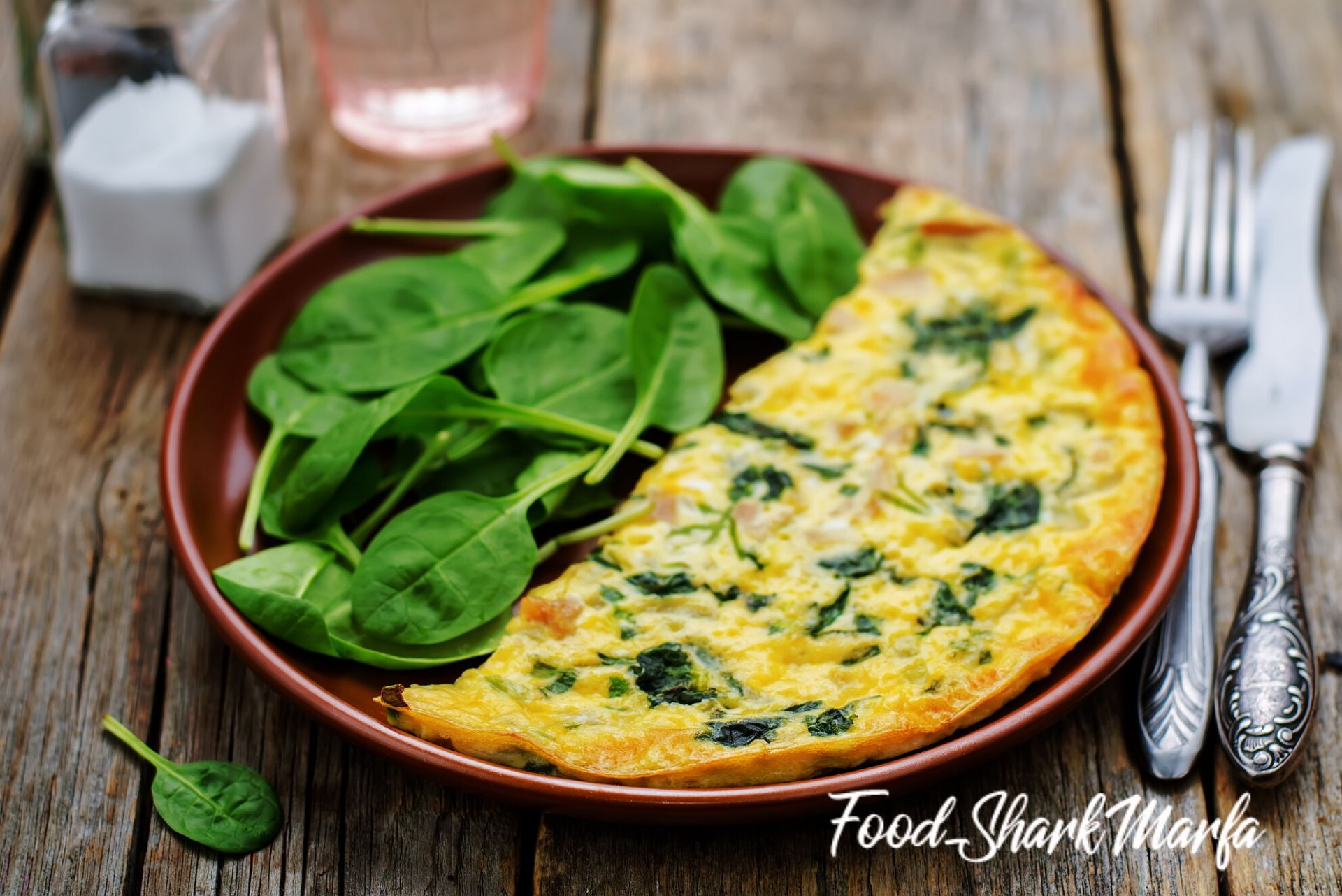 A frittata can be considered a cross between a quiche and an omelet and it is quicker to make and cook than a quiche.

Quiche is a savory baked custard in a pie crust. It can also be a crustless quiche, which is made without a crust. The silky and rich savory custard is made with egg, cream or milk along with cheese, meats such as bacon or chicken and vegetables such as onion, leek, mushroom, spinach, asparagus and more. 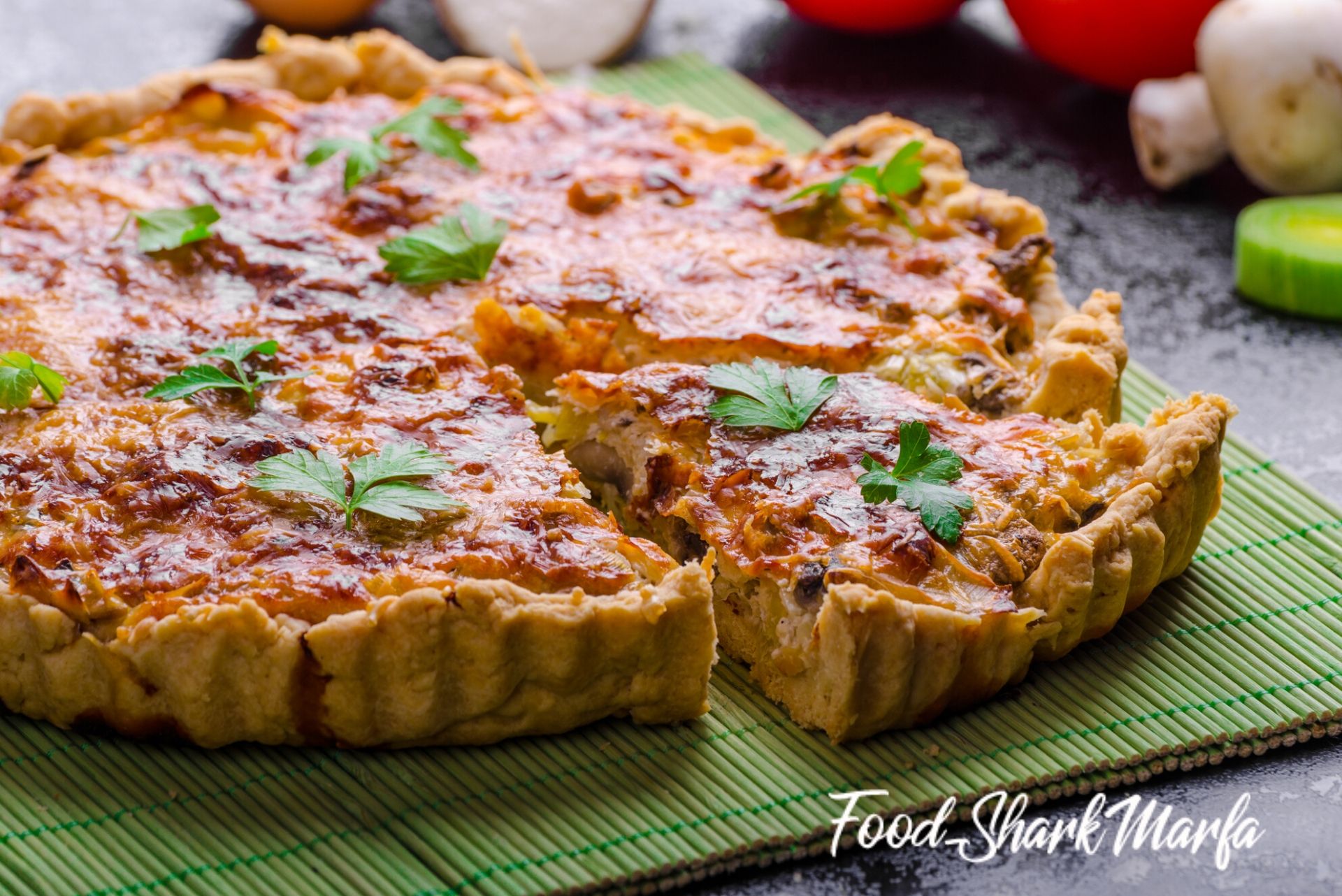 A quiche is more delicate than a frittata as it uses more liquid – around one cup of cream/milk for every two to three eggs used. Because a quiche is usually made with a crust, the crust allows the quiche to contain more cream and milk than other types of egg dishes.

You can make your own pastry for a quiche, or for convenience use a good quality store bought pie crust. Whichever one you choose, to prevent a quiche from overcooking, take it from the oven while it is slightly undercooked in the center. It will continue to cook as it cools down and this will stop the quiche from overcooking around the outer. You can also part-bake the crust first to prevent it from turning soggy.

One of the most popular types of quiche is Quiche Lorraine, which originated in the Lorraine region of France, which sits near the German border. The name quiche is of German origin, with the word coming from the German word for cake – kuchen.

Is A Crustless Quiche Not Just a Frittata?

No, a crustless quiche is not a frittata. Frittata has a denser texture than quiche as the custard/base of frittata is beaten egg, while the custard for the quiche is made with beaten egg, cream and or milk, which gives it a much lighter consistency.

How is A Strata Different to A Quiche?

Both strata and quiche are made with eggs and baked in the oven with a wide variety of filling ingredients, but that is where the similarities end.

Strata is a casserole made with egg, milk, cheese and bread and other fillings. It is constructed in layers (the strata) and is often made the night before and left to chill in the refrigerator before baking in time for brunch. 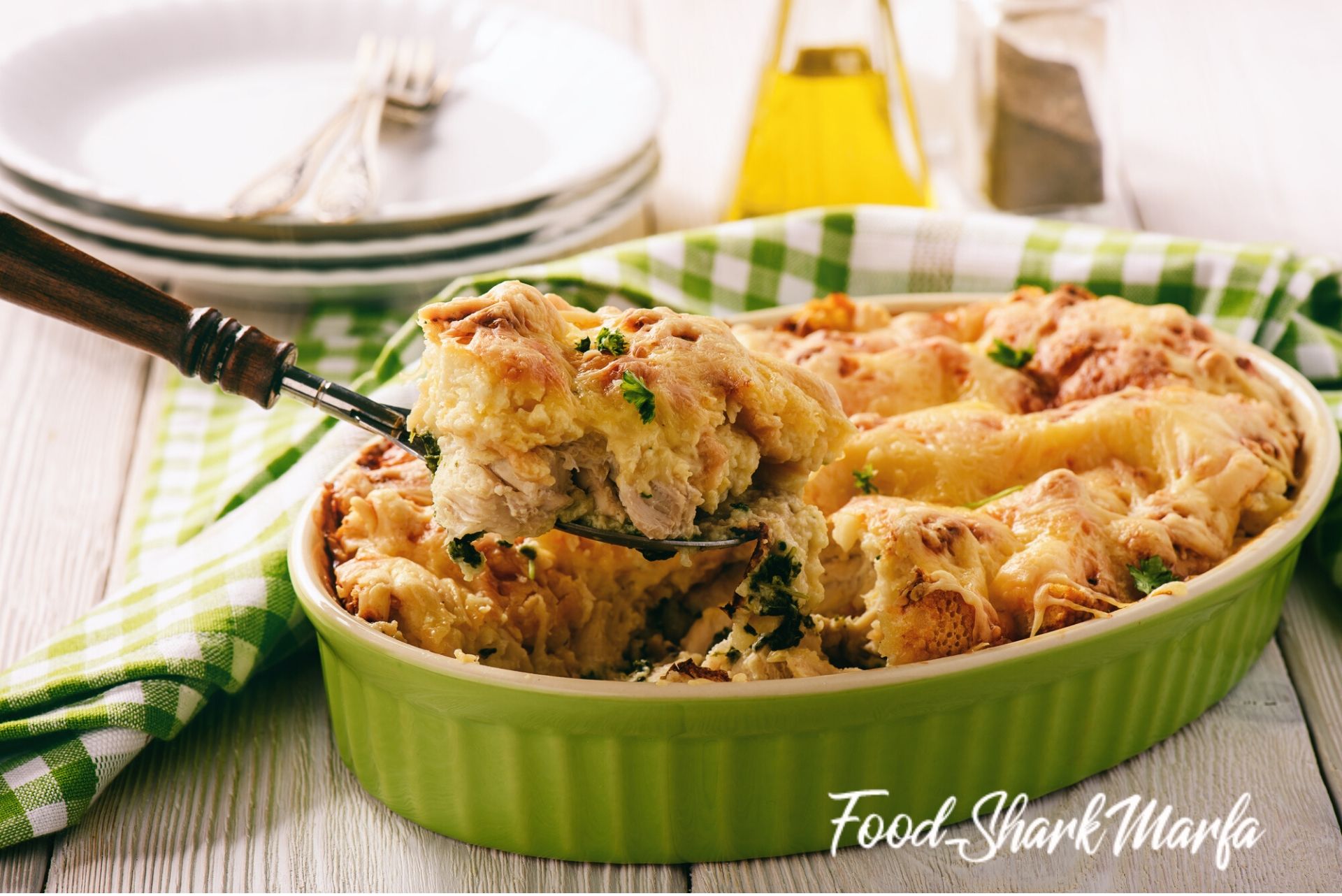 Unlike a quiche, a strata also puffs up – a little like a soufflé - during baking.

Strata is made with around the same amount of liquid than a quiche, but strata is usually made with just milk instead of cream and/or milk while a quiche often contains cream.

Is A Strata an Egg Casserole? 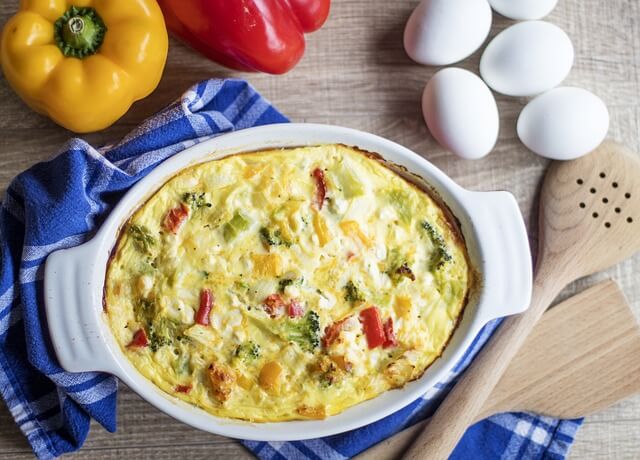 Although strata and egg casserole are different, they can have a similar consistency once baked and you can add whatever filling ingredients you like to them.

What is The Difference Between a Frittata and An Omelet?

A Frittata is an Italian-style omelet which is made with beaten eggs and other filling ingredients and is started off on the stovetop until the outer edge is set and then finished in the oven. A frittata is usually thicker than an omelet and both sides are cooked.

In comparison, an omelet is made with lightly beaten eggs and extra liquid such as milk (around one tablespoon per egg) and whatever filling ingredients you fancy. Only one side of the omelet is cooked on the stovetop.

When making an omelet, it is easier to add the egg liquid to the skillet first and once the sides are set, add the pre-warmed filling ingredients (such as cheese, meat and vegetables) and then fold the omelet in half or thirds. 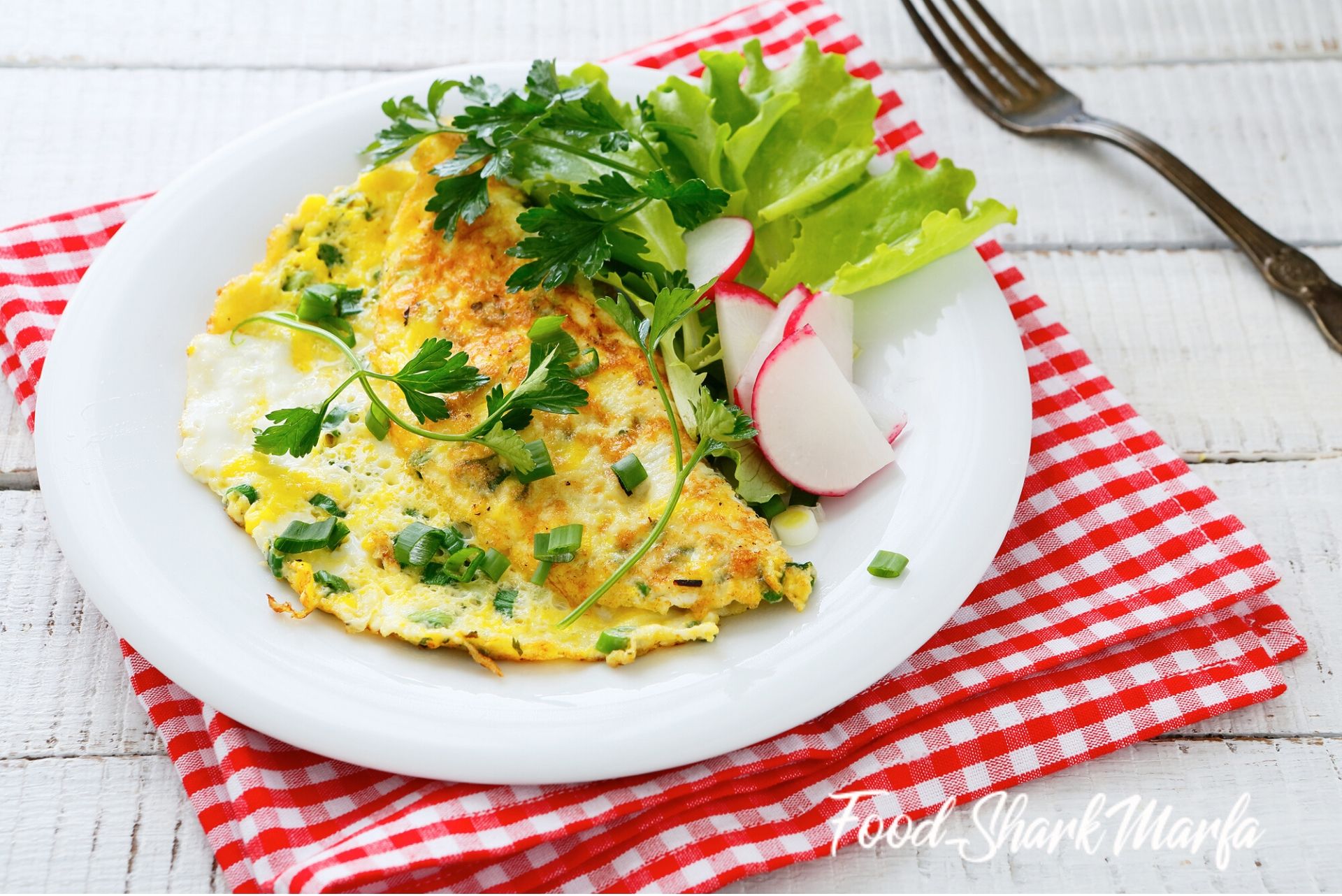 Frittata can be frozen once cold and as it is put in the oven to finish cooking, it is easier to cook more portions of frittata at once compared to an omelet. One disadvantage with a frittata though is it does not tolerate ‘wetter’ fillings as well as an omelet does, so you should avoid putting too much extra liquid into a frittata.

How Easy is It to Make Vegan Frittata or Quiche?

It is quite easy to switch quiche and frittata, or indeed omelet, strata or egg casserole to a vegan dish.

Non-dairy milks such as soy milk, coconut, almond, casher, rice or oat milk can be used in place of milk in recipes and there are various commercial egg replacers available which can take the place of eggs (use ¼ cup of liquid substitute for each whole egg). You could also use a blended silken tofu or a crumbled regular tofu which has a similar texture to cooked eggs. A dash of turmeric, mustard or nutritional yeast will add a yellow hue to the tofu. But remember that using tofu will make some baked goods a little heavier.

Vegan cheeses, such as those made from coconut oil can be used as cheese substitutes in frittata, quiches and other egg dishes and meats can be replaced with TVP (textured vegetable protein) or TSP (textured soy protein) if required.

It may take a little trial and error making an egg dish without eggs and to save you time, it is definitely worth hunting down vegan recipes that have been written as vegan recipes, rather than trying to adapt a conventional dairy recipe.

Along with other egg dishes, frittata and quiche are both versatile, easy to make and are of course, a good source of protein!