For the many who have embraced one pot cooking (and for those of us who never bothered to use a second pan!), jambalaya is a perfect one pot rice-based meal, whether cooked on the stovetop, in the oven, the crockpot or Instant Pot.

If you have leftover jambalaya, or you like to batch cook for the freezer, then you will want to know if you can make jambalaya and then freeze it. Yes, you can freeze jambalaya, but as we will see in this post, it is not the straightforward matter of just throwing the leftovers into the freezer.

There are two important things to consider when freezing jambalaya, the quality of the rice and shrimp.

Read on to not just find out more about to freeze it while keeping most of its quality, but also to learn more about some of the origins of this fantastic dish. 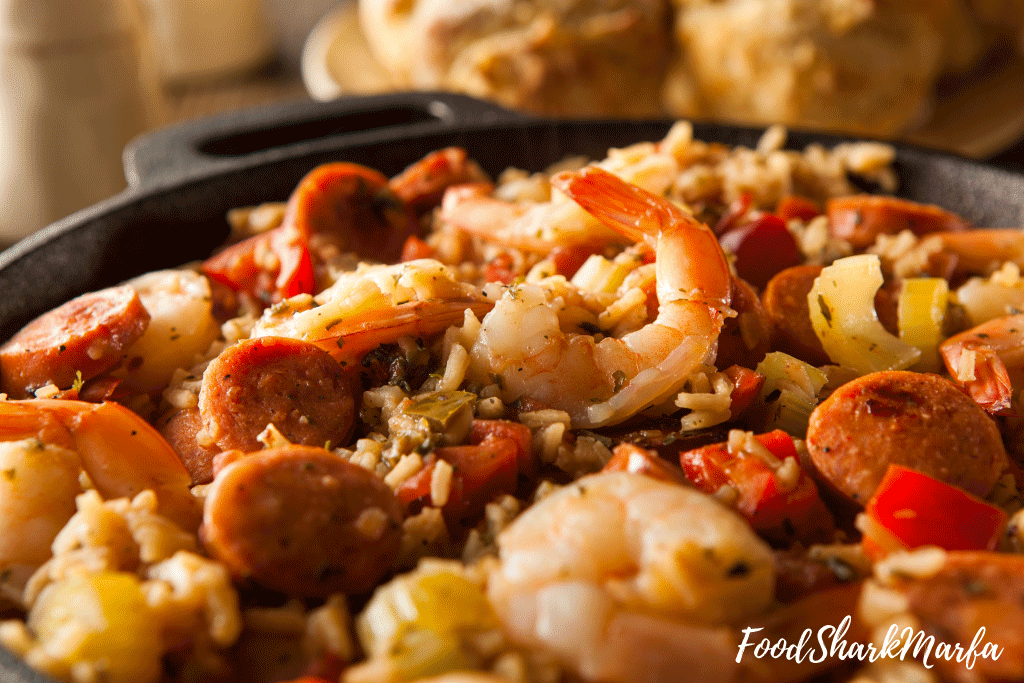 What is The Difference Between Creole and Cajun Jambalaya?

A favorite in Louisiana and the southeast, there are different recipes and variants of jambalaya, but most traditionally contain meat in the form of pork or chicken; sausage such as andouille (smoked pork sausage), chorizo or smoked sausage (kielbasa is fine) and seafood (shrimp, crabmeat, crawfish and more). Depending on the region, it can also contain game such as duck or venison.

The other essentials for jambalaya are bell peppers, celery and onion – also known as the ‘holy trinity’ or mirepoix - along with seasonings. 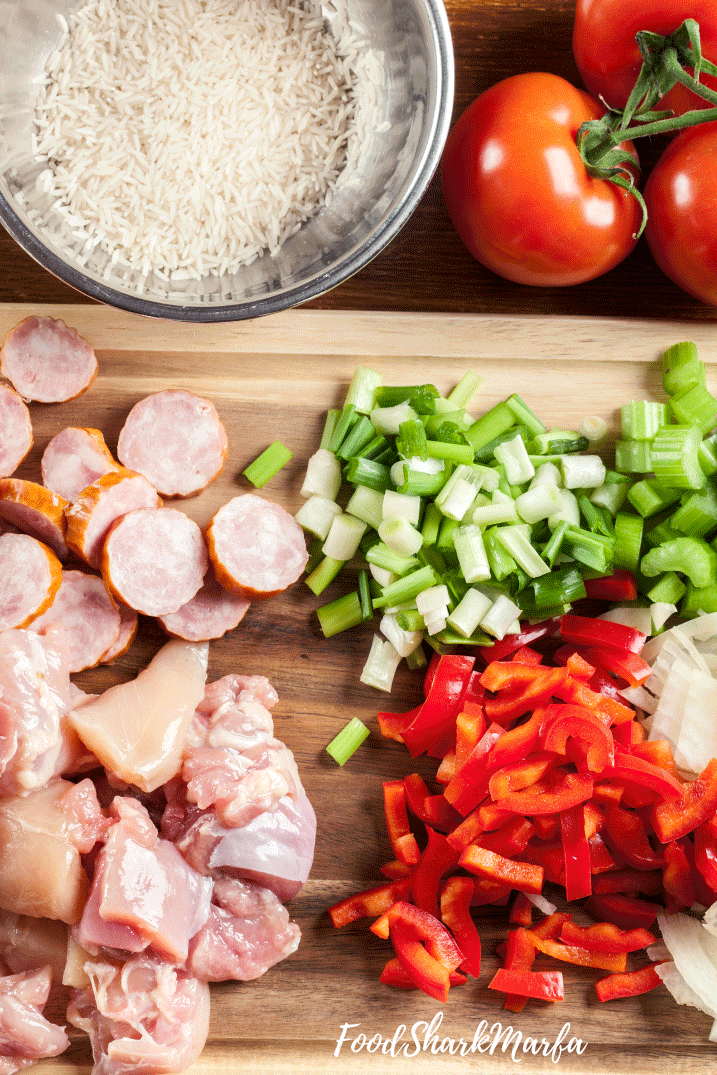 If a jambalaya is a Creole style, then it is a red jambalaya as the meat and vegetables are first cooked, then tomatoes, rice and stock are added to the pan. The tomatoes give the finished jambalaya a reddish color, which is why it is known as red jambalaya. Creole jambalaya is popular in New Orleans and other Creole areas. 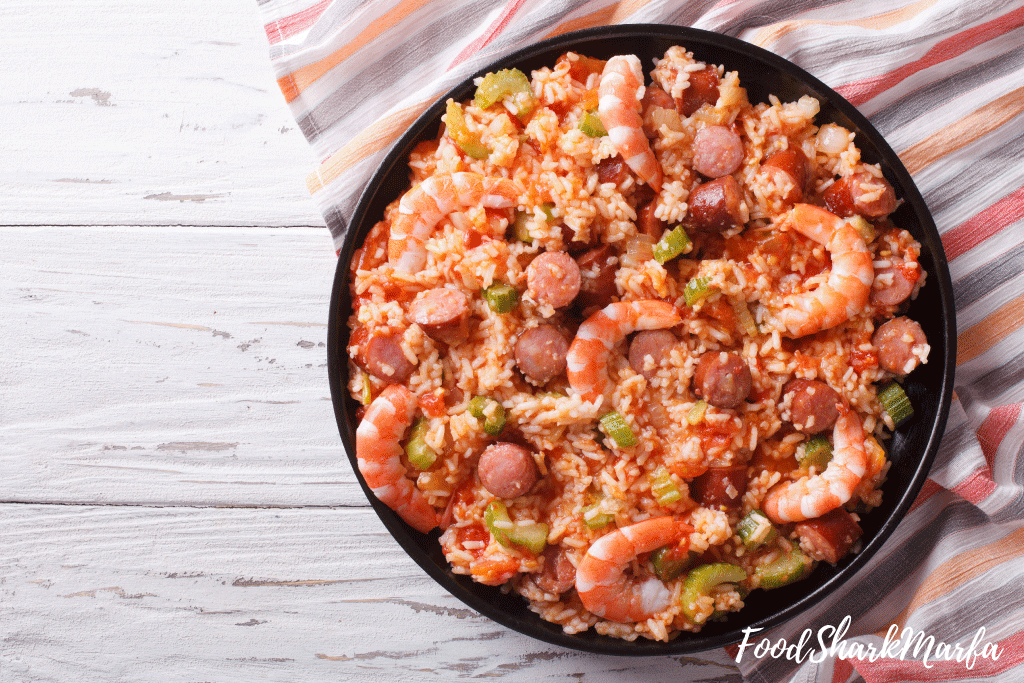 In comparison, the Cajun jambalaya is usually served in rural Louisiana and does not contain tomatoes. When it is made, the meat is cooked first and allowed to caramelize. Then the vegetables are added, then finally the stock and rice. Often called brown jambalaya due to its brown color from the caramelized meat, this style has a smokier and deeper flavor. 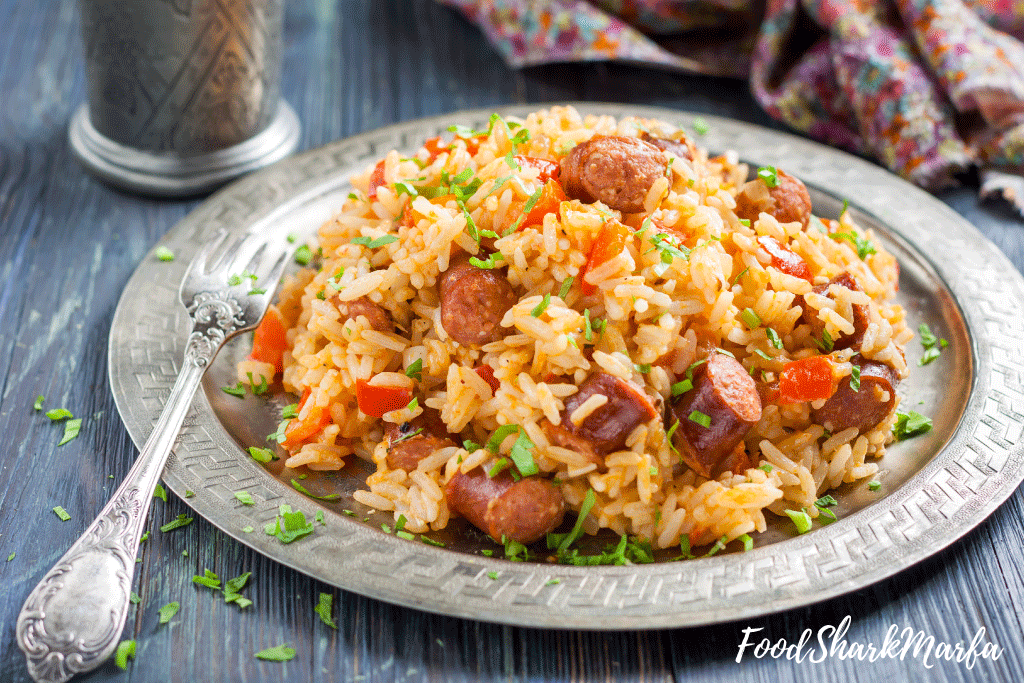 It is thought that both styles evolved from New Orleans in the eighteenth century. At this time, New Orleans was a busy port that received visitors from many parts of the world including Spain. Spanish visitors to the area brought their paella recipes, but because saffron was unavailable in the New World at that time, it seems that tomatoes were added instead - creating the Creole jambalaya.

Other ingredients of the jambalaya also evolved from New World settlers. The sausage was introduced by German immigrants, the mirepoix from the French, cayenne pepper from Native Americans and of course, the skills of rice cultivation from West Africans!

Whichever style of jambalaya you prefer, it makes a hearty meal on its own, but if you do want to serve it with sides, then some crusty bread or cornbread, collard greens or a green salad with a light dressing is fine.

How Similar Is Jambalaya to Spanish Paella?

Although the main ingredients in jambalaya and paella are often the same, paella lacks the heat of jambalaya and it contains saffron as its main spice. Paella also has more of a Mediterranean flavor as it is made with olives, paprika and lemon.

What is The Difference Between Jambalaya and Gumbo?

Jambalaya is a rice-based dish while gumbo is a stew often thickened with okra. The ingredients for gumbo can also vary drastically.

What Should I Think About Before Freezing Jambalaya?

Fresh jambalaya should keep for three to four days in the refrigerator. Its safety and quality will always depend on the ingredient with the shortest shelf life – either the seafood and/or the chicken.

It should be said that jambalaya usually always taste better fresh than frozen, but, too many leftovers, or lack of time to prepare it fresh means that for some of us, freezing is a real option.

There are two key points to think about before you decide to freeze jambalaya. The first is that frozen rice can become very mushy when frozen. The second one is that shrimp turn spongy and flabby after freezing.

Over the next few sections, I discuss these points in more detail and offer suggestions that can help reduce some of issues that crop up when freezing rice and shrimp.

How to Freeze Jambalaya for Batch Cooking

If you prefer to make up batch meals for the freezer, then you have more flexibility with jambalaya than if you were just freezing leftovers.

The easiest way to deal with spongy shrimp is by not adding them to the jambalaya when you first cook it. It is easy enough to add fresh shrimp when reheating it, or you can just sauté fresh or commercially frozen shrimp with a little butter and seasoning and place them on top of the reheated jambalaya when you serve it.

There are actually two options for cutting out the chance of mushy rice in your jambalaya:

Cook the jambalaya without any rice, then when you reheat, fetch the frozen meat, vegetables, spices and stock up to boil in a pan and then add the rice (and shrimp if required). This will ensure your rice is cooked perfectly instead of it being mushy.

Under cook the Rice

This will leave the rice under cooked and stop it from being as mushy when it freezes. By the time you have reheated the frozen jambalaya, the rice should then be fully cooked, if not, just let the jambalaya simmer on low heat for a few minutes longer until the rice is as you like it.

Experimenting with using different types of rice, such as brown rice, in a jambalaya can also make it easier to under cook the rice before freezing.

Batch freezing without rice or with under cooked rice should allow you to store jambalaya for as long as three months in the freezer.

How to Freeze Jambalaya Leftovers

Unfortunately, if you do freeze jambalaya as leftovers, the rice will be mushy. If you have cooked it with shrimp, then you may want to pick the shrimp out and eat them with something else (shrimp Po’ boy anyone?); rather than leaving them in the jambalaya when you freeze it.

If you have a vacuum sealer, this is always the best way to freeze leftover jambalaya as it will prevent the rice from becoming mushy.

Otherwise, the only other way to freeze leftovers is by placing them into a Ziplock bag and pushing all the air out of the bag before sealing it up. You can then place it into a second bag to minimize freezer burn.

Once frozen, leftovers are best used with a month or so to prevent their texture from deteriorating further.

How Should I Thaw and Reheat Jambalaya?

Whichever way you decide to reheat your frozen jambalaya, or indeed reheat fresh leftovers, remember it should always be reheated to a safe minimum internal temperature as measured with a food thermometer. Foodsafety.gov says we should always reheat leftovers and casseroles to 165°F.

A dish containing poultry or pork should always be heated to 165°F as measured with a reliable food thermometer .

If you want to heat the frozen jambalaya in the microwave, then leave it to defrost in the refrigerator overnight. Do not leave it out on the countertop to thaw as this will increase the risk of developing a foodborne illness.

You can then reheat the thawed jambalaya in the microwave, but watch out for those shrimp again, they will become rubbery if overheated! You will also need to keep an eye on the liquid content. If the rice looks as if it is getting too dry, then add a little boiling water to it and stir before continuing to heat. Otherwise, reheat in 30 second blasts, giving it a quick stir each time.

Even when reheating fresh jambalaya, it can be easier to do it in a fry pan with a little extra water as this will help it keep its texture. Do keep an eye on the liquid level and add a little more if needed.

You can reheat frozen or thawed jambalaya in a pan and to be honest, this is the easiest way to reheat if you need to add the rice and/or shrimp to it.

If you have vacuum packed the jambalaya then you can reheat it by just placing the pack in a pan of boiling water and leaving it to heat until the safe internal temperature is reached.

You can thaw and reheat frozen jambalaya in the oven, or just reheat your already thawed jambalaya. Turn the oven to 300°F and as with reheating by other methods, do keep an eye on the liquid content.

It should take around 20 to 30 minutes depending on how much you are reheating and whether it is still frozen or thawed.

In this post, I have explained that yes, you can freeze jambalaya, however, depending on how you freeze it, you may end up with mushy rice and spongy shrimp.

If you want to prepare jambalaya exclusively to freeze, then you can adapt the recipe so that it stays high quality when freezing, but if you need to freeze leftovers, then be prepared to lose some of the texture of the dish. However, freezing does allow you to save those tasty leftovers, instead of having to trash them.

If you have enjoyed reading this post, do share it with people you know and I would love to hear your comments and experiences around freezing jambalaya, or if you have some other tips for making the most of frozen jambalaya.