Yes, pepperoni is one of our favorite pizza toppings, but with both home produced and imported salami readily available in grocery stores, in this article I ask the important question of whether salami can – and should - be used on pizza in place of pepperoni. 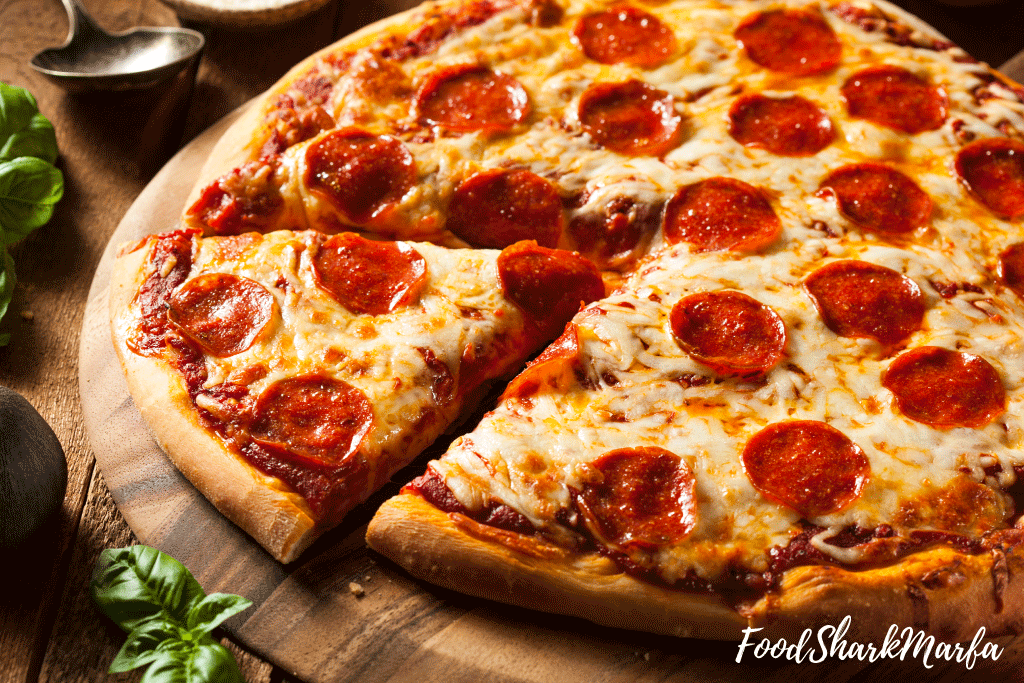 Salami and pepperoni are both sausages suitable for eating cooked or as is in sandwiches and salads. It is probably more accurate to say that pepperoni is a type of salami – which is a traditional Italian cured sausage.

The good news is that unless you are a sausage purist, then yes, salami and pepperoni can be used in place of each other, including on pizza, although they do have different flavor profiles, with pepperoni being the spicier of the two.

Continue reading for more about salami and pepperoni and for non-pizza related recipe tips to help you get the most out of them. I also look at some of the safety concerns around eating processed meats such as pepperoni and salami and review some of the nutritional considerations.

The Lowdown on Italian Salami

Salami is a cured sausage originally from Italy which evolved as a way for Italian peasants to store meat safely so that they still had access to some meat throughout the year. The name salami comes from ‘salare’ which means to make something salty and salami was originally made with pork and salt.

As well as being a popular sandwich filling, salami is ideal in pasta dishes, on salads, with clams, in frittatas, soups, nachos, baked potatoes and so much more. In fact, salami can be just as versatile as bacon. In Italy, salami is usually served at lunchtime alongside other antipasti.

Salami is usually made from pork, veal, or, chopped beef and poultry which is lightly spiced. There are different types of salami and Italian regions will have their own varieties which can be made with other meats such as boar and may contain different seasonings or be cured in different ways. 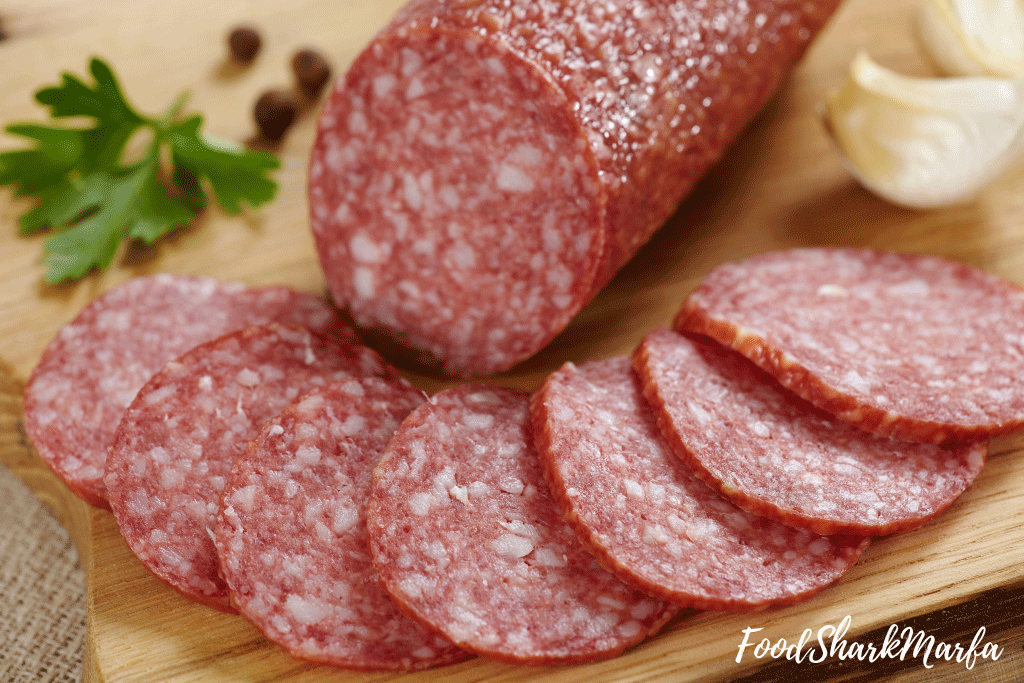 A typical pork salami is usually made from quality lean and fatty meat cuts from different parts of the pig, as the ratio of fat: lean is important in salami. Once the meat is ground, salt, black and white peppers, garlic powder, sugar, cloves, fennel seeds and other spices are added, along with nitrates. After everything is mixed, it is stuffed into a casing and made ready for fermentation and curing.

During fermentation and curing, the humidity and temperature of the environment are controlled to allow bacteria to grow in the meat. As the sugar in the salami acts as a food source for the bacteria, it allows it to continue to multiply until the pH or acidity of the salami suddenly drops. This drop in pH now means the salami is safe to eat. Fermentation and curing also allows the salami to be dried as the salt in it pulls the water out and the high humidity stops the meat from drying out as the water levels decline.

Humidity and temperature levels are altered during the process and salami can stay in a curing cell for around 17 days. During this time, a form of penicillin mold (Penicillium nalgiovense) is added to the surface of the salami. Seen as the white outer on the outer surface of salami - like blue cheeses - this mold is completely safe to eat. After fermentation and curing, the salami is allowed to thoroughly air dry.

Although salami is commonly made from pork, when it is made from other meats such as beef, it may be halal or kosher, so do look out for dietary certifications.

It is now much easier to buy Italian salami as import bans on cured meat products from Italy were relaxed by the USDA a few years back. There are also artisan salami makers based in the US which are gaining in popularity. Otherwise, from the grocery store, an Italian-style Genoa salami is a pork salami which has more of an acidic taste, while the hard salami is usually pork and beef and is smokier flavored.

All About Pepperoni (or Italian-American Salami!)

Pepperoni contains spices such as allspice and aniseed and its chili peppers and paprika help give pepperoni its red color, as well as its smokiness and pepperiness. It is these flavors that help make pepperoni so popular. In fact, one recent poll in the Western US showed that pepperoni was the favorite pizza addition.

There was a similar sausage topping being used on pizzas in the early 1970s, but this was not a dried sausage like pepperoni. The Ezzo Sausage Company developed the first pre-sliced pepperoni made especially for pizzas and unlike other Italian cured meats, this pizza pepperoni only took a few weeks to manufacture.

The name pepperoni comes from peperone, the Italian word for bell peppers which eventually evolved into pepperoni. Be careful though when visiting Italy, as if you order pepperoni with a dish, you will get peppers rather than sausage!

Pepperoni is an American version of Calabrese salami and is also related to the Italian salami called soppressata, making pepperoni a true Italian-American meat. Made with more spices and sweeter than salami, pepperoni is often steamed, unlike most salamis that are aged and cured.

The steaming also ensures that when pepperoni cooks in the oven, it cups and chars, which allows the fat to meld with the other pizza toppings. Pepperoni goes well especially well with mushrooms as the fat from the pepperoni helps the mushrooms crisp up, while the mushrooms act to cut through some of the fat and the spice of the pepperoni.

As I have already mentioned, pepperoni can be produced faster than salami, although basic parts of the processing are similar.

When made commercially, the pork or other meat for pepperoni is mixed with seasoning and sodium nitrate, along with sugar which helps equalize the acidity levels – which will rise as the meat cures - as well as adding flavor and color.

Once the mix is ready, it is stuffed into the casings, usually fibrous ones as pepperoni is a dry sausage. Once each casing is full, it is sectioned off with a piece of rope or string. The pepperoni is then cooked in an oven at a low temperature, or in a smoke house and as the casings are porous, it allows the sausage links to slowly dry and age.

Pepperoni is not just for topping pizza though, like salami it goes well in a variety of pasta recipes, including the favorite mac and cheese. Try it in a chickpea, parmesan and basil salad, or add it to homemade nachos or grilled cheese sandwiches for some extra spice. As with salami, pepperoni can be treated like bacon and used in a wide range of dishes. 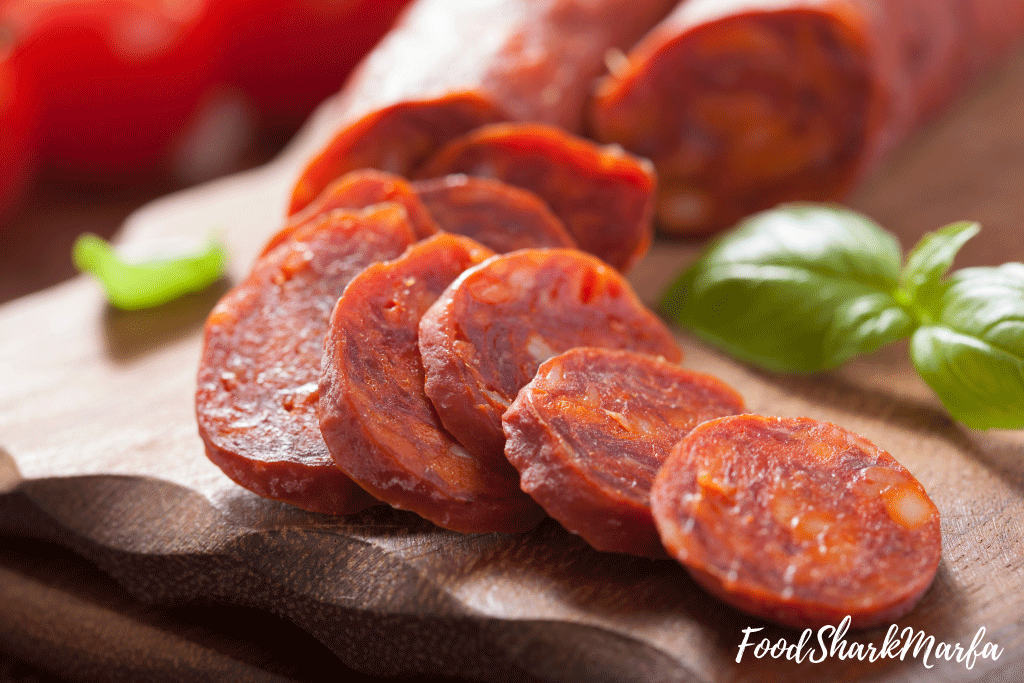 Chorizo is also worth a mention here as this Spanish sausage tastes like salami but looks like pepperoni. Made with different spices, chorizo has also been dry cured and can be used in recipes or eaten as is. Shorter chorizo sausages are usually spicy while the longer ones are sweeter. There is also Mexican chorizo. Usually made from beef, this is spicier than Spanish chorizo and contains chilies.

Salami vs Pepperoni – The Nutrition Stakes

Obviously there can be differences in nutrition depending on how the salami and pepperoni are made and what ingredients they contain, but generally, due to the fermentation process, salami is a better source of B vitamins – vital for effective food metabolism - while pepperoni contains more vitamin E and vitamin K.

It is also worth noting that one serving of salami or indeed pepperoni is quite a lot less than other types of sliced meats such as turkey. Three slices of a store-bought salami gives around 18% of the daily value for saturated fat intake.

There is little difference in carbs and sugar content, with salami weighing in with the slightly higher content of 2.4 grams of carbs per serving compared with pepperoni. They both have a glycemic index (GI) of 28 and contain around the same amount of protein.

Pepperoni is a better source of calcium and a number of essential amino acids, as well as being lower in sodium than salami.

Salami vs Pepperoni – The Safety Stakes

The take home message from this seems to be that processed meats should be eaten occasionally rather than frequently, with IARC reporting that consuming 50 grams of processed meat each day increased cancer risk by 18%.

As we have seen, salami is an Italian cured and air-dried sausage which is usually seasoned with light seasoning, while pepperoni is an Italian-American sausage, or a type of salami made with paprika and peppers. Although they do have different flavors, they can easily be used in place of each other in many recipes.

Perhaps the most important take home point in the salami vs pepperoni debate is that either will add great flavor to a pizza when enjoyed as an occasional treat!