Popping a bag of tortilla chips and some dips onto the countertop offers easy nibbles to a few friends with drinks, or just add cheese and jalapenos and whip up some large plates of nachos for games night. The simplicity of the tortilla chip is perhaps key to why its sales are increasing faster than potato chips.

Traditional tortilla chips were always made of corn, but today there are a range of tortilla chips available for different diets, whether higher fiber, lower sodium, gluten free or lower fat. We review some of the best tortilla chips on the market to help you choose the best flavor for your salsas. We also look at the nutritional content of tortilla chips and offer some ideas for using up those broken bits! 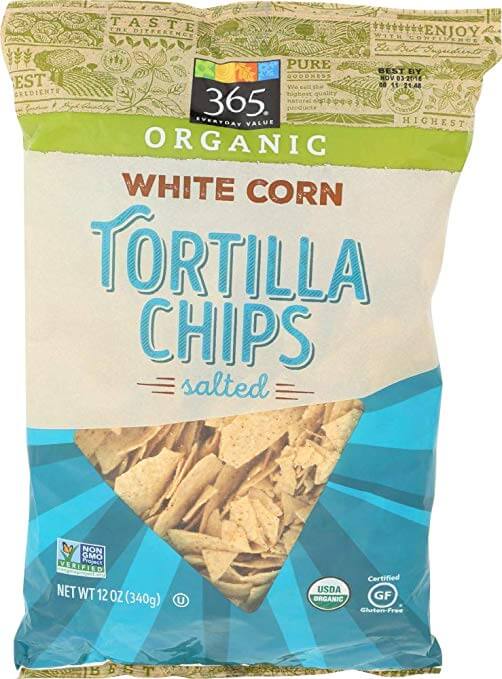 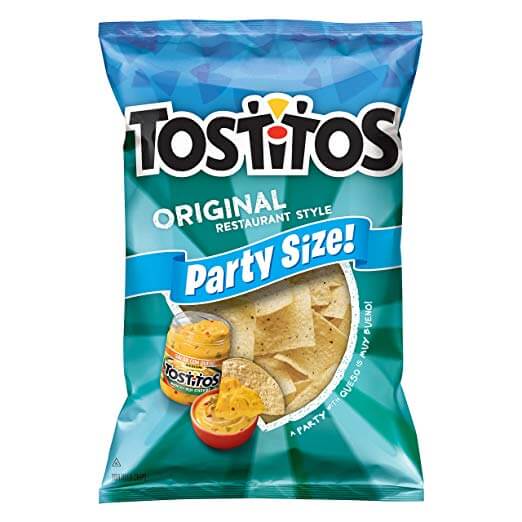 A traditional tortilla chip made with white corn, Tostitos Original Restaurant Style Tortilla Chips (18 oz) are ideal for dipping or nachos. Some consider these tortilla chips are a little too salty and that they are sometimes a little thin and prone to breaking when being dipped into chunkier salsas.

Made from organic blue corn, the Garden of Eatin’ blue corn tortilla chips (22 oz) are also Non-GMO Project Verified, kosher and gluten free. They are also free from any artificial preservatives, flavors, colors and hydrogenated oils. Some buyers consider that these do lack flavor and as these are blue corn, you may find them ‘heavier’ than yellow or white corn and like any chips, they can be prone to damage during shipping if not packaged correctly. 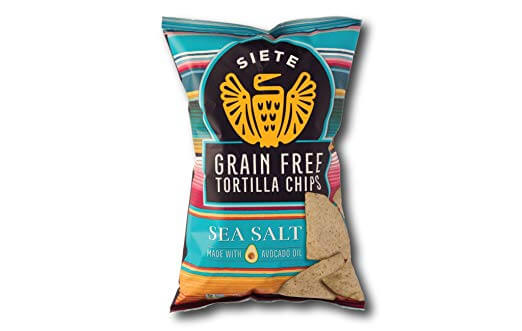 The Non-GMO Project Verified 12 pack Siete sea salt grain free tortilla chips (5 oz) are made from cassava flour, coconut flour and avocado oil. As well as being grain free and certified gluten free, they are also free from soy and dairy and are Paleo friendly and vegan. These chips have a long shelf life - able to keep for five months before eating.

Unfortunately, depending on how well these are packaged, there is a risk of these arriving crushed and as gluten free tortilla chips, they can also cost significantly more than regular chips. 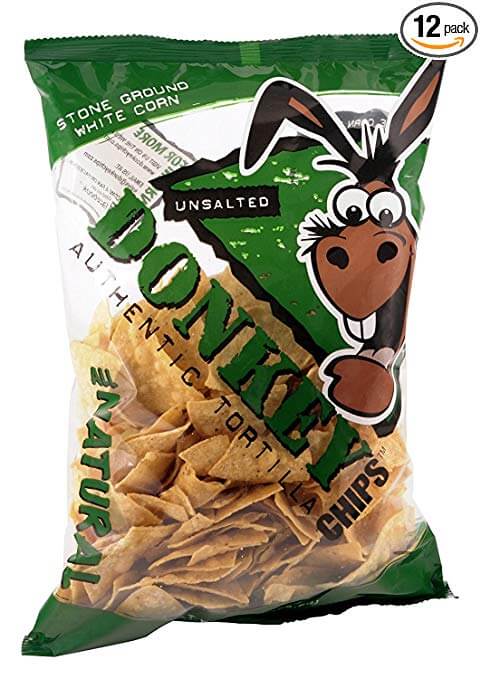 The gluten free pack of 12 Donkey authentic tortilla chips unsalted (14 oz) are also free from preservatives and trans fat. These are made in the US from white corn. If you do prefer salted, then you will find these have more of a bland taste, however if you do want a lower sodium diet these are an ideal option. There is also a risk of you receiving these tortilla chips with shipping damage.

The Garden of Eatin’ Red Hot Blues corn tortilla chips (16 oz) are made with blue corn and are sprinkled with cayenne pepper. These are also organic, Non GMO-Project Verified, gluten free and kosher. They are also free from artificial preservatives, flavors and hydrogenated oils. Some consider these chips thicker and harder than other tortilla chips and because they are spicy, you may want to eat with salsa or dip.

Complete with a Tex-Mex style seasoning, the twin pack of Julio’s seasoned corn tortilla chips (19 oz) are yellow corn tortilla chips. Like with any fragile foods, there is a risk of these arriving damaged. Some buyers are also unhappy that these tortilla chips contain MSG. As these are only available in grocery stores within certain states they can only be purchased online by the rest of the US. 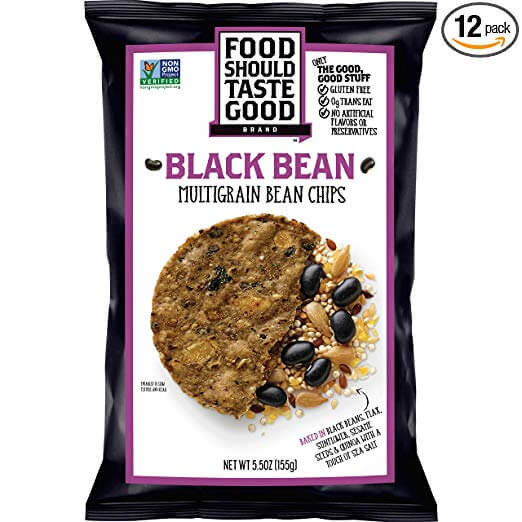 The gluten free pack of 12 Food Should Taste Good Brand black bean multigrain chips (5.5 oz) are made with black beans, flax, sunflower and sesame seeds, quinoa and sea salt. They do not contain any artificial preservatives or flavors.

These are a low sodium chip which contain more fiber and are cholesterol free. There are also non-GMO, kosher and vegan. These do have a different flavor to regular tortilla chips and you may find that they will not pair as well with the usual dips and salsas which means you may need to experiment with more exotic dips. 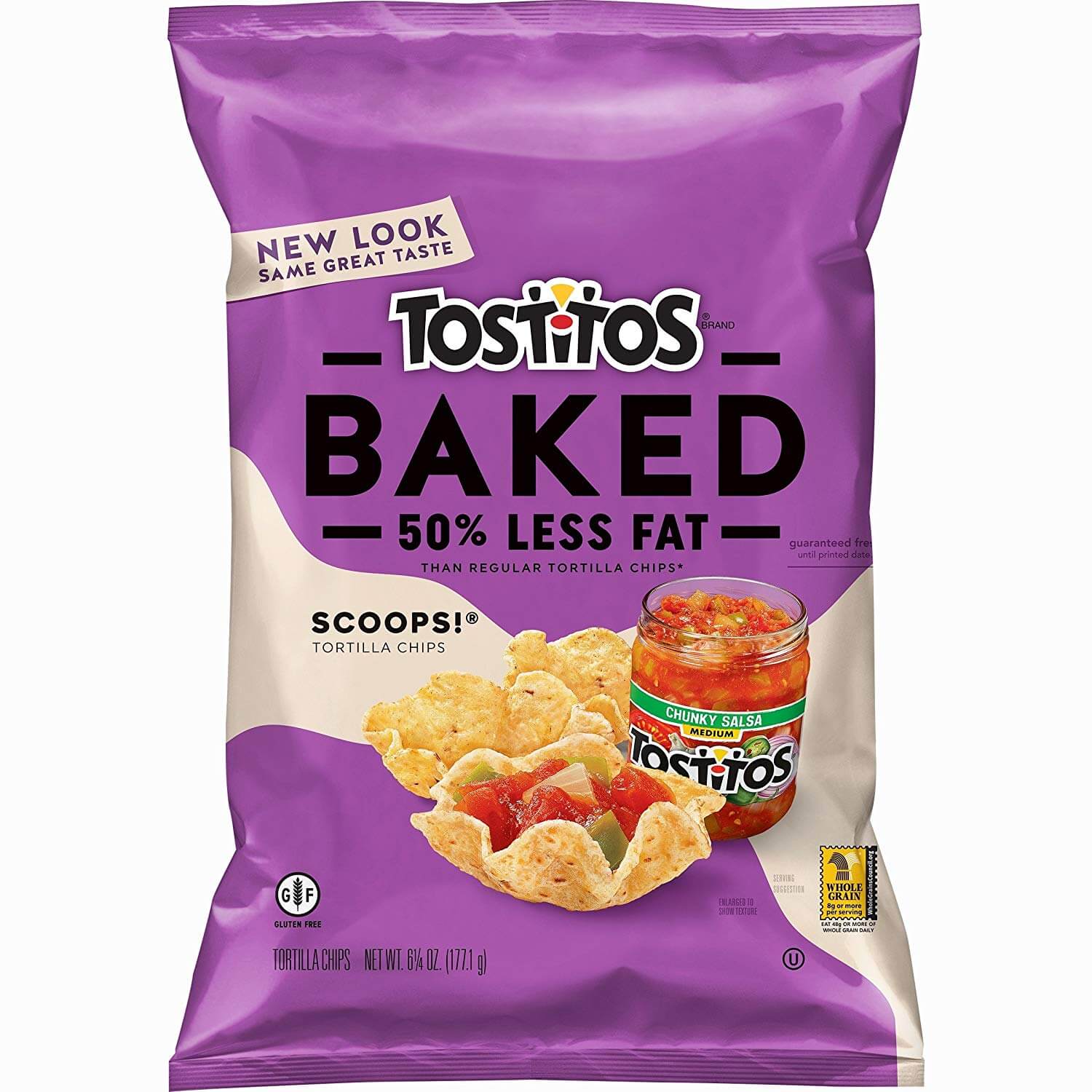 These whole corn Tostitos baked tortilla chips have 50% less fat - 6 grams per 2 oz serving – when compared to regular fried corn tortilla chips. These are also gluten free. Like any tortilla chips, there can be a risk of them being crushed during shipping and although these are lower fat, you may find the sodium content higher than expected.

The gluten free Lay’s Santitas white corn tortilla chips (11 oz) are salted, making them ideal for snacks or for nachos. Like any fragile item, there can be a risk of these arriving damaged and some consider that these may be a little too salty. Some consider these do have less salt than other tortilla chips and they may be thinner when using in chunkier dips. 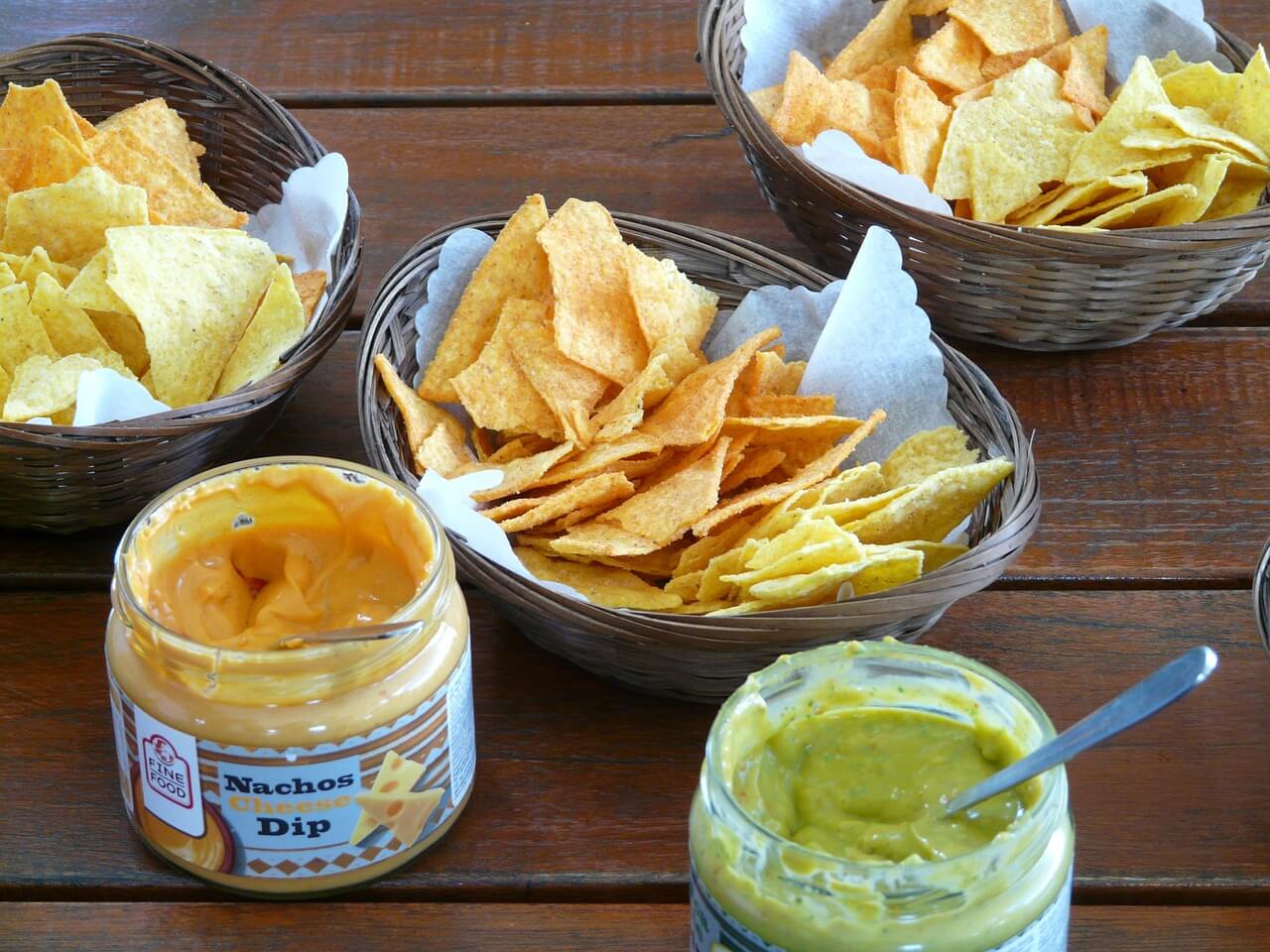 Evolution of the Tortilla Chip

Tortilla or torta which is Spanish for cake was a word brought to Mexico by the Spaniards. Mexicans used the word tortilla to describe their flat corn and flour cakes which were always made from ground corn pulp until wheat arrived and the flour tortilla evolved.

There are a couple of probable origins as to how tortilla chips became big in the US, including that they were produced in the form of fried up leftover tortilla dough (tostados) in southern California in the 1900s.

Mass production of tortilla chips are also attributed to Rebecca Webb Caranza who co-owned a Mexican deli and tortilla factory in Los Angeles during the 1940s with her husband. When they installed an automatic tortilla machine to increase their output, they also found that the quantity of misshapen tortillas increased. Because they did not want to keep throwing them out, Caranza decided to cut them up and fry them.

These ‘tort chips’ were originally served up to their family and friends, but when word got out about the new snack, the couple started to sell dime bags of tortilla chips at their deli. The chips started to spread across the state and soon, large manufacturers began to make their own tortilla chips.

Frito-Lay eventually made their own version of these tortilla chips, calling them Doritos – Spanish for ‘little golden things’. Although many purists do not consider Doritos as true tortilla chips, the rising popularity of nachos meant that Frito-Lay developed its own tortilla chip and called it Tostitos.

Tortilla chips continue to increase in popularity, with sales today increasing faster than potato chips; although potato chips still remain the biggest seller in the US.

How Tortilla Chips are Made

Traditional tortilla chips are made with yellow corn, white corn, wheat flour or blue cornmeal. Other popular types of tortilla chips today include those made from multi grains or even black beans. The raw material in chip manufacture always determines the quality, color and cooking parameters of the finished tortilla chips.

Traditional tortilla chip manufacture has changed little over the decades. The corn is cooked in pots over a fire and then soaked for 8 to 16 hours in a food-grade quicklime and water solution to remove the hull of the corn. The quicklime is important as it works as an anti-microbial and helps give aroma, flavor and color to the chips.

After cooking, the liquid (nejayote) is poured off and the solids (nixtamal) are dried and ground into coarse corn flour (masa) with hand grinders or stones. The masa is either molded in a press or by hand into thin disks and these are baked on a hot griddle or in modern factories, a gas oven.

Once the tortilla chips come out of the oven and are cooled, they have lost some of the moisture so can now be fried. The frying time and temperature depends on the type of corn used, although most are fried for 90 seconds or less. As soon as the tortilla chips are fried, they are then sprayed with salt and/or seasonings.

After cooling the tortilla chips are immediately bagged to stop them losing their crispiness.

Corn chips are made from corn meal which is processed into a particular shape, such as Fritos. Corn tortilla chips have to go through the traditional process of nixtamalization where they are processed with quicklime.

Nachos, or topped corn tortilla chips, were invented by Ignacio Anaya who was maitre’d at Piedra Negras in Mexico. One day in the restaurant, some customers arrived and because he had no chef he went into the kitchen, cut up some tortillas and topped them with jalapenos and cheese. He called this dish Nachos Especiales. Nachos should always contain two core ingredients, tortilla chips and cheese.

A 2 oz serving of traditional corn tortilla chips made with vegetable oil and salt gives around 280 calories and 38.4 grams of carbs. 34.3 grams of these carbs are starch and around 1 gram is sugar. The remainder is fiber – giving around 10% of our daily fiber content. If the corn chips are served with a quarter cup of salsa, then fiber increases to 17%.

The fat content of this serving makes up around 111 calories of the 280 total calories. As tortilla chips are usually fried in unsaturated fat, there is only around 1.4 grams of saturated fat in this portion and there is no cholesterol.

Although corn chips are salted, they are still quite low in sodium, with a serving containing 7% of the maximum 2,300 mg of sodium is the recommended daily maximum for healthy adults.

If you want to increase the protein content of corn chips, half a cup of refried beans with your corn chips would give 23% or 19% respectively for women and men of the daily recommended protein intake. Blue corn, which is a maize variety rather than corn, has less starch and contains around 20% more protein than white corn tortillas.

Whether they are the tasty bits left in the bottom of the family bag or a bag which has been accidently crushed, there are plenty of ways to use up broken chips. Why not cook up a Mexican or Tex-Mex breakfast options such as migas or chilaquiles? Or drop them in the bottom of the bowls before you serve chili up?

Broken chips can be crushed further to make them into breadcrumbs, or they make an ideal topping as are for mac and cheese or casseroles. An easy nacho pot pie is another option, or you can add them to green salad, use as a soup topping or fill your hotdogs with them for some extra crunch.

Even though tortilla chips have not been around for that long in the US, they are now giving potato chips a serious run for their money. In this article we have looked at the evolution of tortilla chips, how they are made and perhaps most importantly, what you can do if you open a bag of tortilla chips to find they resemble breadcrumbs rather than chips.

If you prefer the traditional salted tortilla chips, ones which meet your dietary needs or even chips which are a little more exotic or spicier, we trust our reviews of the best tortilla chips have been helpful when making your chips and dip selection.
5/5 - (14 votes)

Based in upstate New York, Madison is a devoted foodie and spends some of her time developing new recipes for cookbooks and the remainder of her time hunting out specialty ingredients from far and wide. She also holds a bachelor’s degree in nutrition and has a particular interest in antioxidants in foods and how these can help contribute to our health and wellbeing.

The 15 Best Oil for Popcorns to Enhance Flavors

The 9 Amazing Health Benefits of Blueberries

Based in upstate New York, Madison is a devoted foodie and spends some of her time developing new re...