Its versatility alongside its rich and umami flavor makes oyster sauce a cooking staple for many of us even though its creation came about as a complete accident! Made with caramelized oyster juices with salt and sugar, oyster sauce adds a rich flavor to marinades, salad dressings and many other types of dishes.

In this article we review some of the best oyster sauce available, as well as delving into the accidental history of oyster sauce and how it is manufactured. We also offer some hints on the best ways to use oyster sauce in the kitchen and consider its nutritional profile, including its high sodium content. 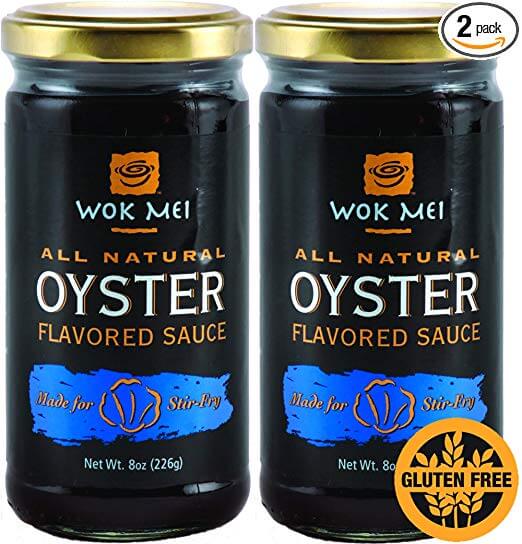 Suitable for using in stir fries and as a marinade, the Wok Mei oyster flavored sauce (gluten free) does not contain any monosodium glutamate (MSG), refined starches or sugars. Made in the US, this oyster sauce is also free from any GMO ingredients and dairy and has been tested and certified as gluten free. This sauce comes as a twin pack of 8 fl. oz glass jars.

A small number of buyers have not been as keen on the flavor of this sauce and some consider that it has a slightly over-caramelized flavor.

Coming as a twin pack of 18 fl. oz glass bottles, the Lee Kum Kee premium oyster sauce is made with the finest oyster extracts and does not contain any soy sauce. It does however contain MSG as well as wheat flour which makes it unsuitable for those with gluten sensitivities. A small number of people also consider that this sauce can be a little too sweet. 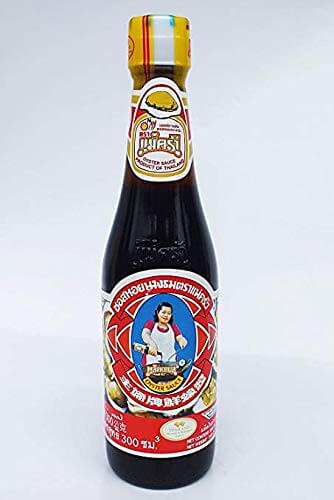 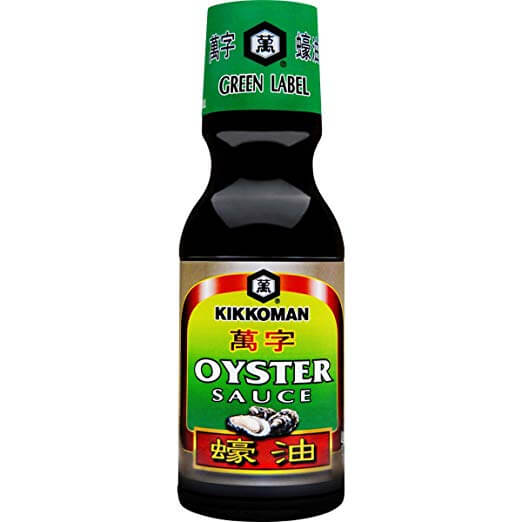 The MSG-free Kikkoman oyster sauce (green label) is made in the US and comes as a smaller 12.6 fl. oz bottle. This oyster sauce is umami rich with a hint of sweetness which makes it suitable for a wide range of marinades and recipes. It can also be used as a seasoning in soups, braises and sauces. This is also free from soy sauce, although some buyers have found this does have a slight aftertaste with it. 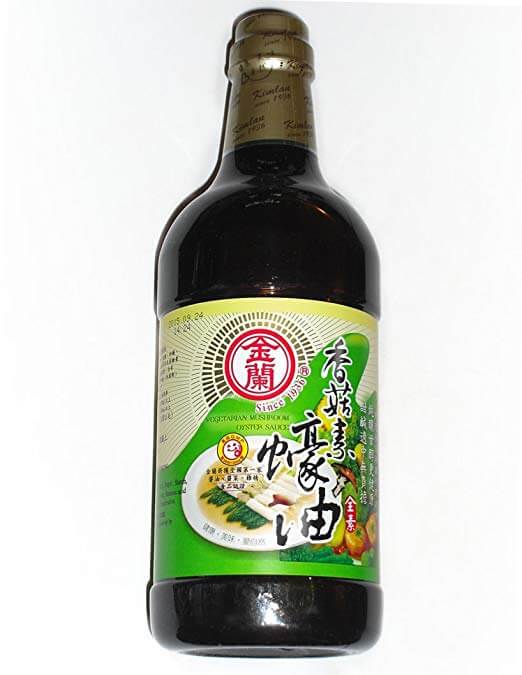 Containing mushroom essence instead of oyster, this vegetarian mushroom oyster sauce is made in Taiwan and ideal for grilling, dipping and stir fries. This sauce contains soybeans and wheat so although suitable for vegetarian/vegan diets, it is not suitable for those with specific intolerances. This mushroom oyster sauce does not contain any MSG and comes as a large 35 fl. oz bottle; although the plastic seal on the bottle may be less than robust.

Free from any GMO ingredients, the Lee Kum Kee Panda Brand oyster sauce is a premium all-purpose oyster sauce for seasoning with. Manufactured in the US, this 18 fl. oz bottle of oyster sauce does contain MSG as a flavor enhancer and also contains modified wheat flour. Some consumers consider that this sauce can lack flavor compared to other oyster sauces. 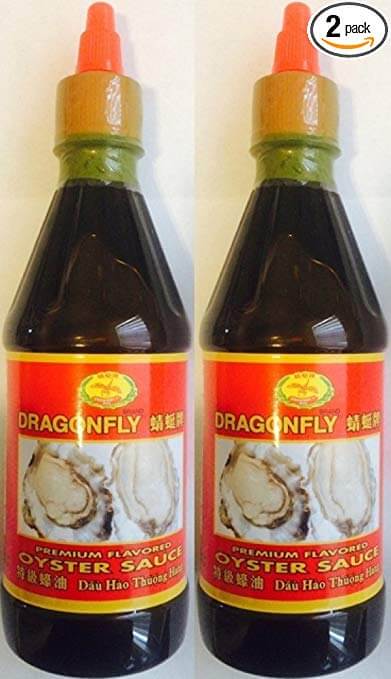 The one advertised contains oyster extract, while buyers have received sauce which contains natural oyster flavor. It is presumed that the sauce advertised is for the non-US market while the sauce received is the imported product for US consumers.

Oyster sauce is made from a mix of caramelized oyster juices which are obtained by cooking oysters over time along with salt and sugar. Most oyster sauces are made with the Crassostrea species of oyster.

Although oyster sauce contains oyster, the fact that the oysters have been boiled has actually removed the fishy taste from the sauce to leave it rich and savory with the texture of a thick BBQ sauce which can cling to food. It also has a sweet, salty and umami flavor with earthy hints. A staple in Cantonese cooking, it is also common in Thai, Vietnamese and Khmer dishes.

Oyster sauce is often compared to hoisin or Peking sauce, but in reality, the two are very different. Although hoisin means ‘sea-fresh’ in Chinese it does not contain any seafood, nor is it served with seafood. Hoisin sauce is made with soybeans, sesame seeds, garlic, salt, sugar, chiles and spices. Like oyster sauce, hoisin sauce is rich, but it has a sweetness which oyster sauce lacks, and its color is more red-brown than the richer brown of oyster sauce. Oyster sauce also tends to be saltier than hoisin sauce.

Oyster sauce was made by accident, when in the 1880s, a cook accidently left a pot of oysters cooking for too long and found that they had reduced to a rich and caramelized sauce. The cook tasted it and found it was delicious the modern oyster sauce was born. The name of this cook was Lee Kum Kee – yes, that Lee Kum Kee - the global Chinese sauce and condiment manufacturer!

Today’s production techniques for oyster sauce are simpler. Many manufacturers mix a sugar and salt base with cornstarch or other starches to thicken it and then add oyster extracts. Soy sauce can also be added as can monosodium glutamate or MSG to add to the umami flavor of the sauce. Many manufacturers also add caramel to give the sauce its rich brown color.

Some oyster sauces are made with mushrooms instead of oyster. These mushroom oyster sauces have a similar earthy flavor to a true oyster sauce and are also available to other diets such vegetarian, vegan or non-seafood.

These pure oyster sauces are made in the traditional way of steaming or simmering the oysters to make a broth which is then simmered further to concentrate its flavor. The broth also thickens during simmering begins to caramelize to produce the rich brown oyster sauce.

One of the simplest ways to use oyster sauce is to pair it with some white rice, or just drizzle over some fresh steamed green vegetables with hot vegetable and sesame oils. The oyster sauce adds some sweetness and saltiness to greens and also contrasts against the flavor of more bitter vegetables such as Chinese broccoli or other leafy greens.

Oyster sauce also suits meals with seafood, meat, poultry, bean and mushroom dishes and particularly complements blander foods such as cold silken tofu. Oyster sauce can be added to other sauces to lighten its flavor; making a lighter sauce ideal for stir fries.

It can also be used as seasoning in stocks and soups and you can whisk some oyster sauce with sesame oil and a little rice vinegar for a tasty salad dressing.

Oyster sauce should always be used carefully and in small amounts – if too much is added, it will overpower food. If oyster sauce is left to cook for too long, or at a high heat it will lose its umami flavor and, in some cases, turn bitter. Because it is a naturally salty sauce, do try to avoid adding any extra salt during cooking.

One tablespoon of oyster sauce contains around nine calories and very little cholesterol, fat or saturated fat. It is also low in fiber and contains less than 1% of the daily recommended protein intake for adults and children. It also contains very few and very low amounts of micronutrients such as minerals.

Oyster sauce is naturally high in sodium and its sodium content may be even higher if it contains soy sauce. A tablespoon can contain around 492 milligrams of sodium, which makes up a third of the American Heart Association’s recommendation of consuming less than 1,500 milligrams of sodium per day.

Consuming the chemical 3-MCPD in foods is considered safe for most people but there are some concerns around its safety when consumed in higher quantities by younger age groups. 3-MCPD and the related 3-MCPD esters are processing contaminants found in some processed foods and vegetable oils such as palm oil.

These chemicals form unintentionally, usually during the refining of oils and these chemicals may have some possible long term and adverse effects on the kidneys and male fertility. 3-MCDP has also shown to cause cancer in long term animal studies.

Since the late 1990s, a number of regulatory bodies in the European Union, Asian countries and Canada began to implement regulations to ensure that 3-MCPD in Asian-style sauces and other products did not exceed limits. There has been cases in the past where independent testing of oyster sauces and other Asian-style sauces in some countries revealed high levels of 3-MCPD and in some cases, these products were withdrawn from the shelves.

The current guidance for the European Union is a maximum concentration of 0.02 mg/kg of 3-MCPD in acid hydrolyzed vegetable protein (aHVP) which is used as a food flavor and in producing non-fermented soy sauce and other Asian style sauces. The FDA currently has a guidance limit of 1 mg/kg which manufacturers adhere to and test for.

How to Store Oyster Sauce

Oyster sauce is a shelf stable product which usually comes with a ‘best before’ rather than a ‘use by’ date. Unopened, oyster sauce can be stored in a cool dark place away from direct heat and light sources. Once opened, oyster sauce should be refrigerated with its cap tightly sealed and once open, it should usually keep for around six months.

Over time, the quality of the oyster sauce will decline. Its color will darken, and the flavor will become stronger through oxidation. A typical indicator is that the contents of the sauce will begin to separate. It can also experience changes in its taste, texture or color but these are usually not harmful to health unless the small is bad and there is evidence of mold. As always, if in doubt – throw it out!

In this article we have looked at exactly what oyster sauce is and how it is made. We have also looked at some of the easiest ways to incorporate oyster sauce into your cooking and the nutritional content of a serving of oyster sauce, as well as how to identify if your oyster sauce has gone bad.

We trust that our reviews of the best oyster sauce have also been helpful for adding an umami twist to your cooking, whether you prefer a traditional oyster sauce, a vegetarian sauce, one without MSG or even which is certified as being gluten free.
5 / 5 ( 20 votes )