Although there is not much research available as to how beneficial grapeseed oil may be in our diets, in the review we take a look at some of the research to date as well as finding out exactly what grapeseed oil is and how it is produced. If you are new to grapeseed oil, or just looking for a good buy, then we also review ten of the best grapeseed oil for cooking with to help you find the right one for you.

The La Tourangelle grapeseed is our Non-GMO Project Verified and expeller pressed budget pick of the grapeseed oils for cooking with.

Coming as a one gallon gourmet foodservice plastic jug with a pilfer-proof cap, the Baja Precious grapeseed oil is a pure grapeseed oil. Produced in Spain through expeller pressing, this oil has been bottled in California. This is suitable for all cooking uses as well as for massage, skincare and other uses.

One or two recent buyers have found that the color of this has changed compared to their previous purchases, and as a larger container, it will be better for those who want to use grapeseed oil regularly, otherwise, like any oil, there is a risk of it turning rancid if left open for a while.

Expeller pressed using traditional French artisan techniques, the La Tourangelle grapeseed oil is Non-GMO Project Verified and also certified as gluten free. This oil is sourced from quality grape seeds in Portugal and Chile which are then dried and crushed to give a pastel green colored neutral and delicate oil.

Ideal for frying with as well as using in marinades and salad dressings, this oil can also be paired with richer flavored oils such as walnut or sesame oils. Available as a 25.4 fl. oz can, there is a risk of receiving the can damaged and some buyers find it awkward to pour from the container cap without it leaking. 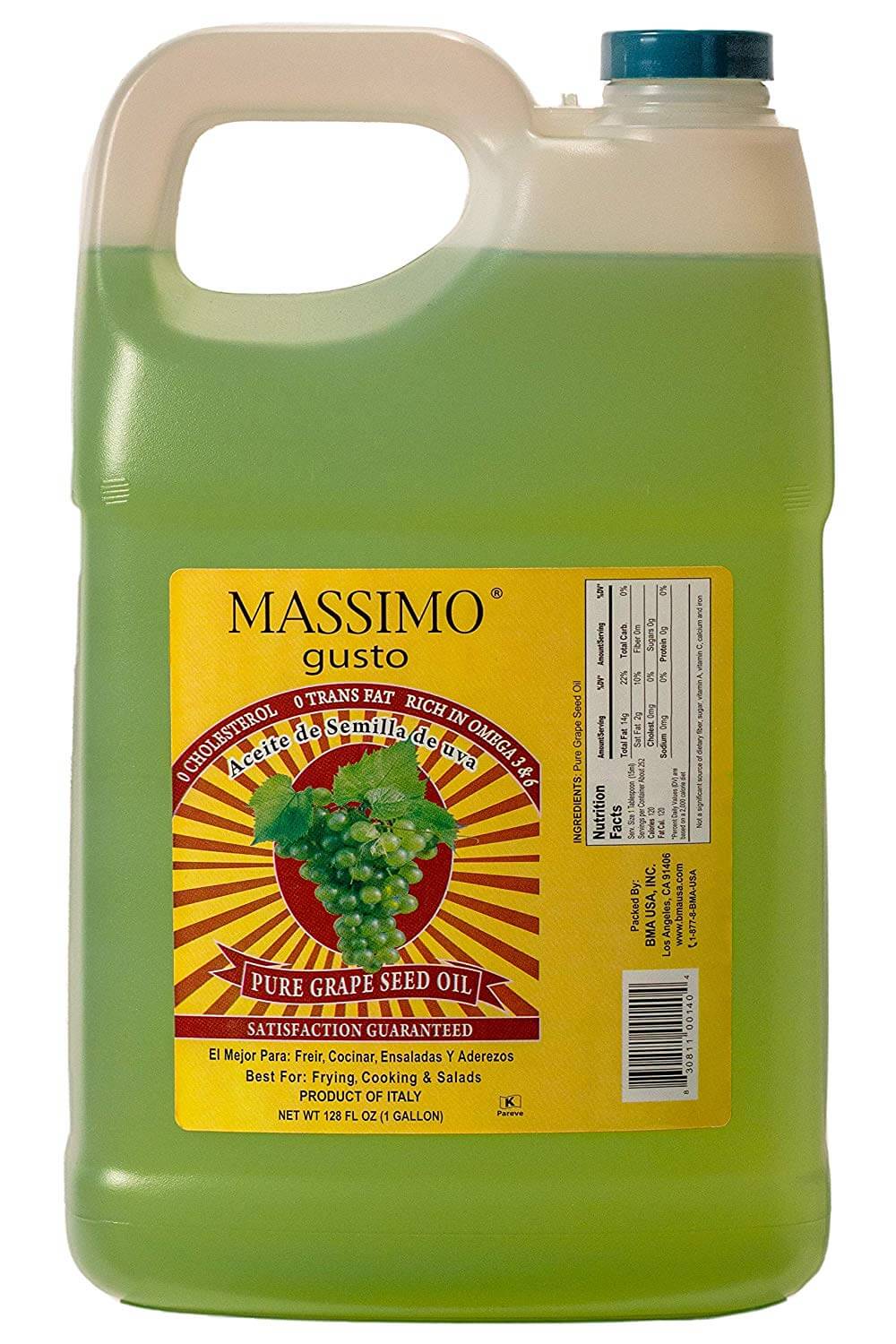 Coming as a gallon plastic container, the Massimo Gusto pure grapeseed oil is an expeller pressed pure grapeseed oil which is produced in Italy. This is certified kosher. Some users have commented that the color of this oil can differ to other grapeseed oils and there is a risk of the container leaking during shipping.

The Sky Organics grapeseed oil is 100% natural grapeseed oil which has been cold/expeller pressed. Sourced from Italy, this is a food grade oil with neutral flavor and a high smoke point which makes it suitable for cooking with. This grapeseed oil can also be used for massage and skin/hair applications.

Although this is organic and does not contain any GMO ingredients, it is not currently certified as being USDA organic, or Non-GMO Project Verified. This grapeseed oil comes in an 8 fl. oz bottle with a press top and a separate dispenser top, although both styles of top can sometimes be prone to leaking.

Imported from France, the Pompeian grapeseed oil comes as a 68 fl. oz (half gallon) container. As more of  a budget-friendly oil, this is extracted with the use of hexane rather than being expeller pressed, but like all pure grapeseed oils, it still keeps its higher smoke point. This is also a Non-GMO Project Verified pure grapeseed oil.

The Kirkland Signature grapeseed oil is bottled in the US from oils sourced from France, Spain and Argentina. Certified as kosher, this is available as a 68 fl. oz (half gallon) plastic container. This oil is produced through hexane extraction rather than expeller pressing. There is a chance of this oil leaking during shipping and the odd buyer has been disappointed to find that the shelf life of this has not been as long as they would have expected. 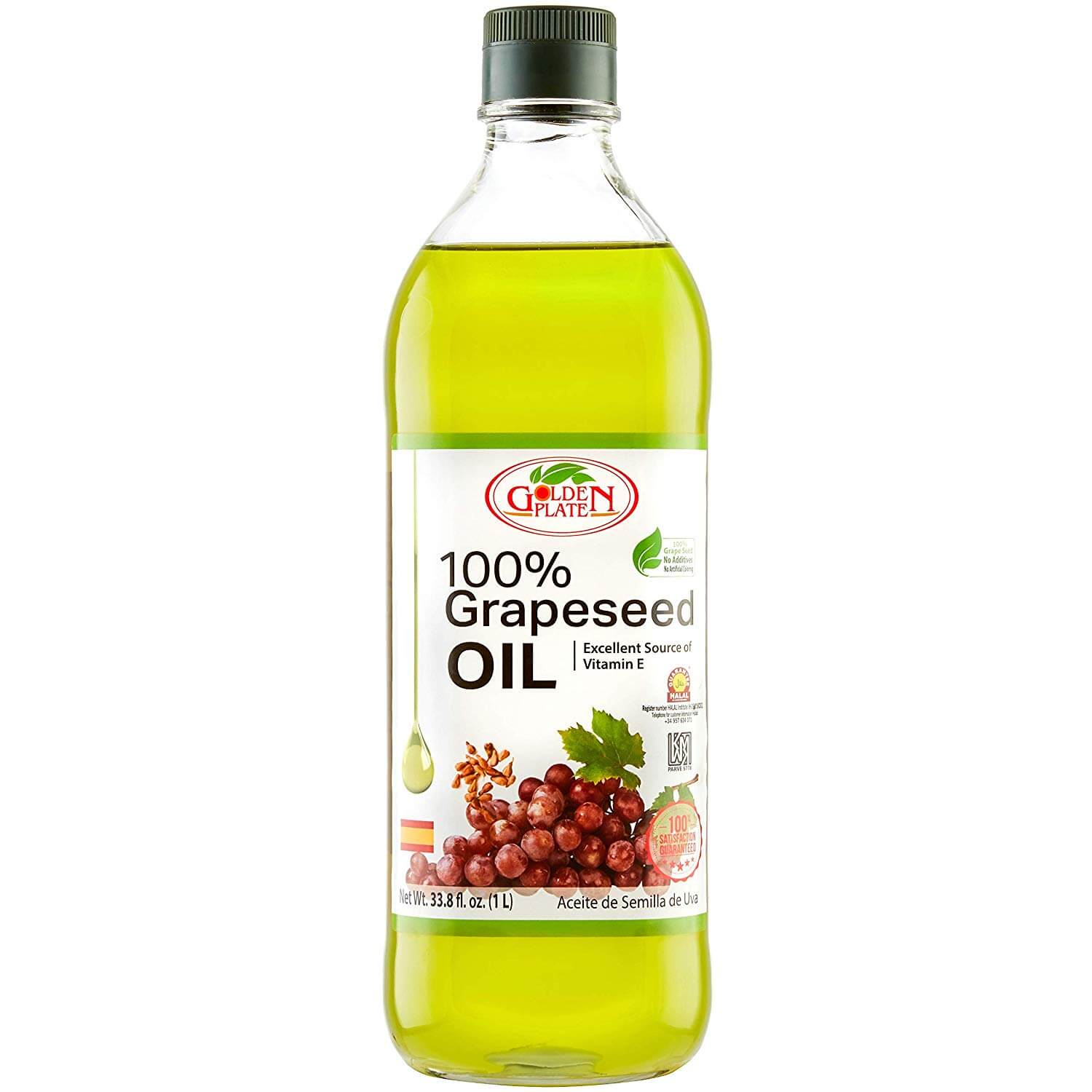 The Golden Plate grapeseed oil is a pure oil which has been produced in Spain. This comes as a 33.8 fl. oz plastic bottle and is certified kosher and halal. There is no information provided as to how this oil has been pressed, although it does come with a satisfaction guarantee. 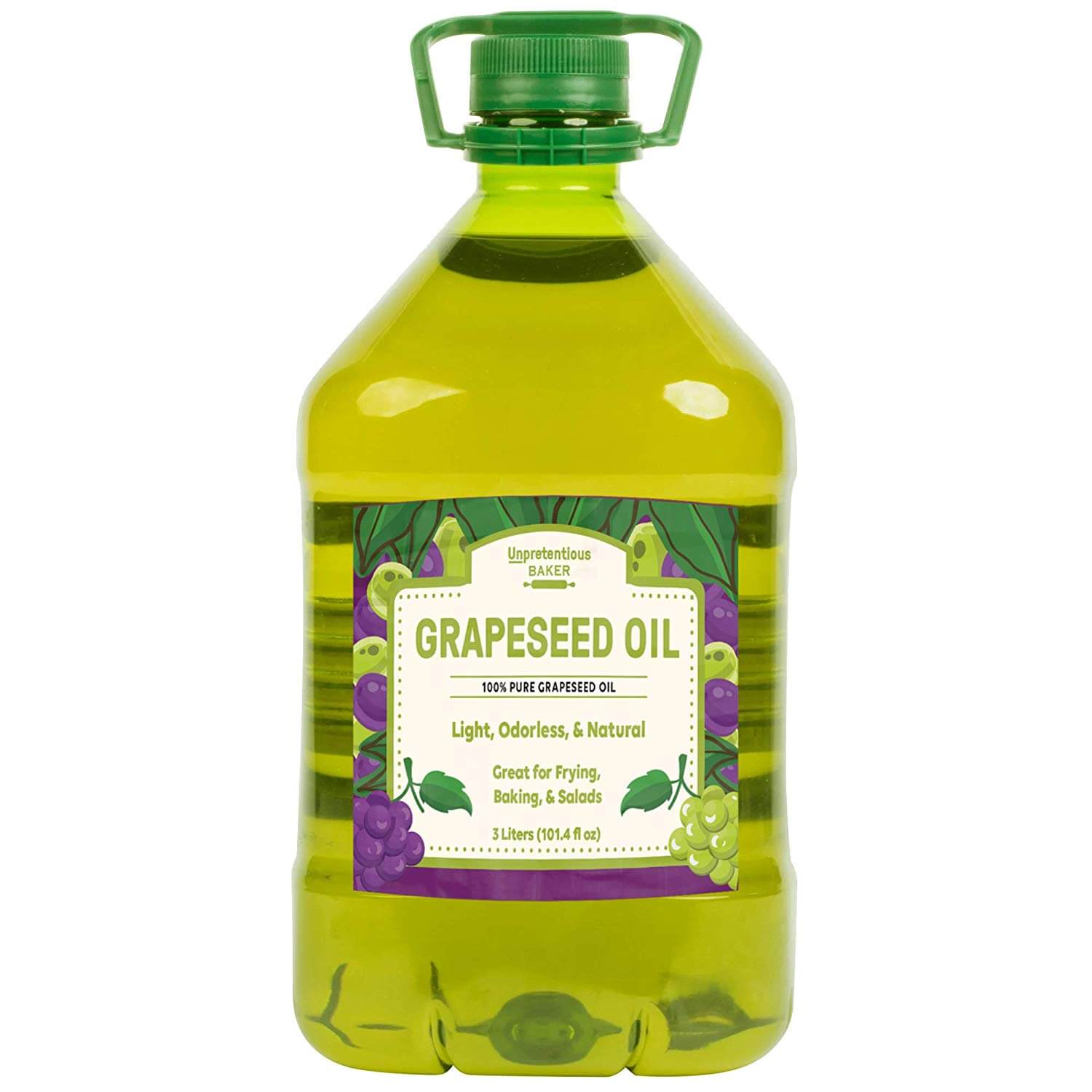 The 100% pure Unpretentious Baker grapeseed oil comes in a 3.17 quart plastic container with a twist off cap. Suitable for using in cooking and for other applications, this is a refined grapeseed oil which has been expeller pressed. This is manufactured in the US from raw ingredients sourced from small farms around the world. This also comes with a satisfaction guarantee from the producer.

Although marketed as non-GMO and gluten free, the labels do not currently display any certifications and as a very large container, this is only suitable for households where grapeseed oil is used regularly as otherwise it can turn rancid. 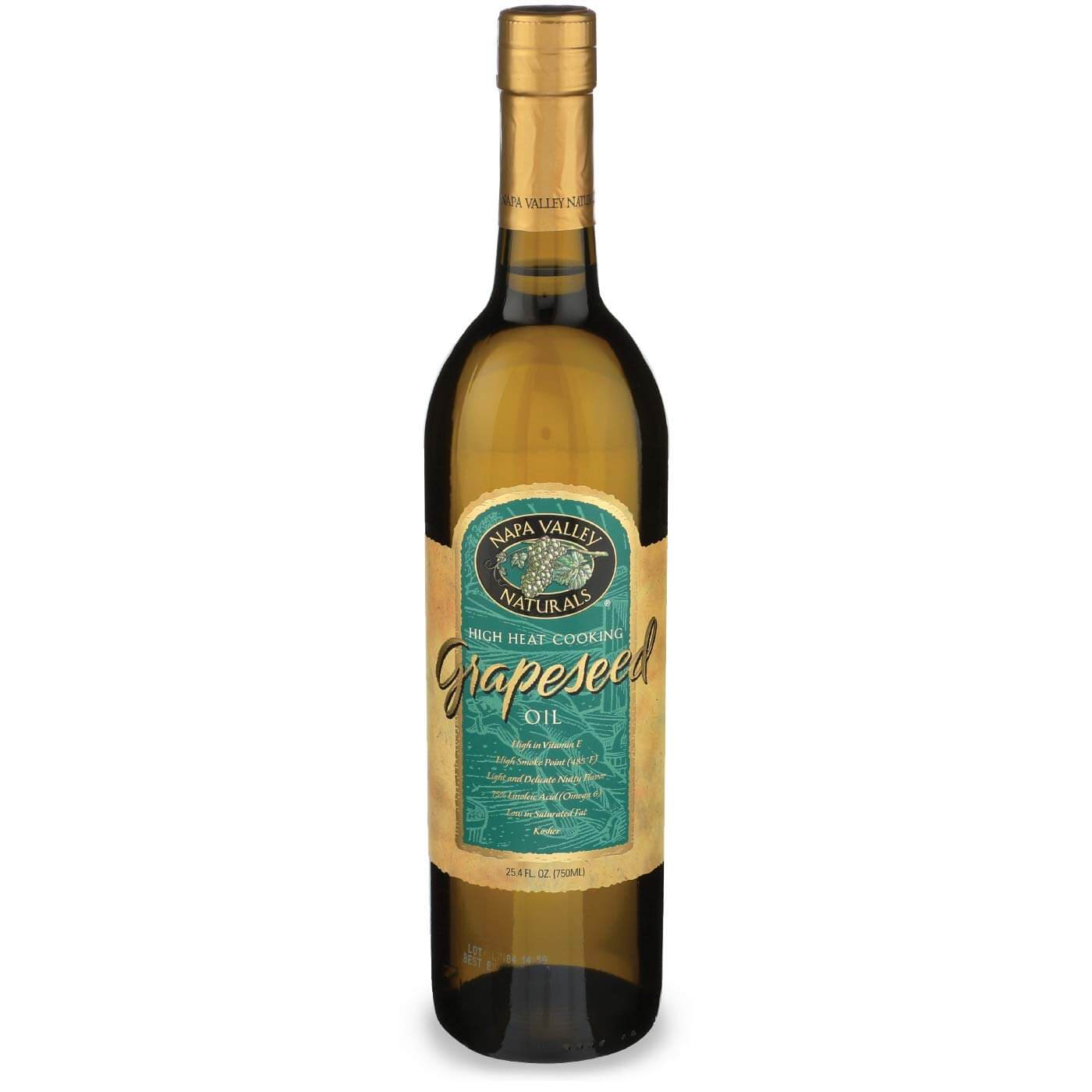 The Napa Valley Naturals grapeseed oil comes as a 25.4 fl. oz glass wine bottle and is made in California from grapes that have been crushed to make wine in other countries. This is a delicate and light oil which has a smoke point of 485°F making it ideal for all cooking needs. 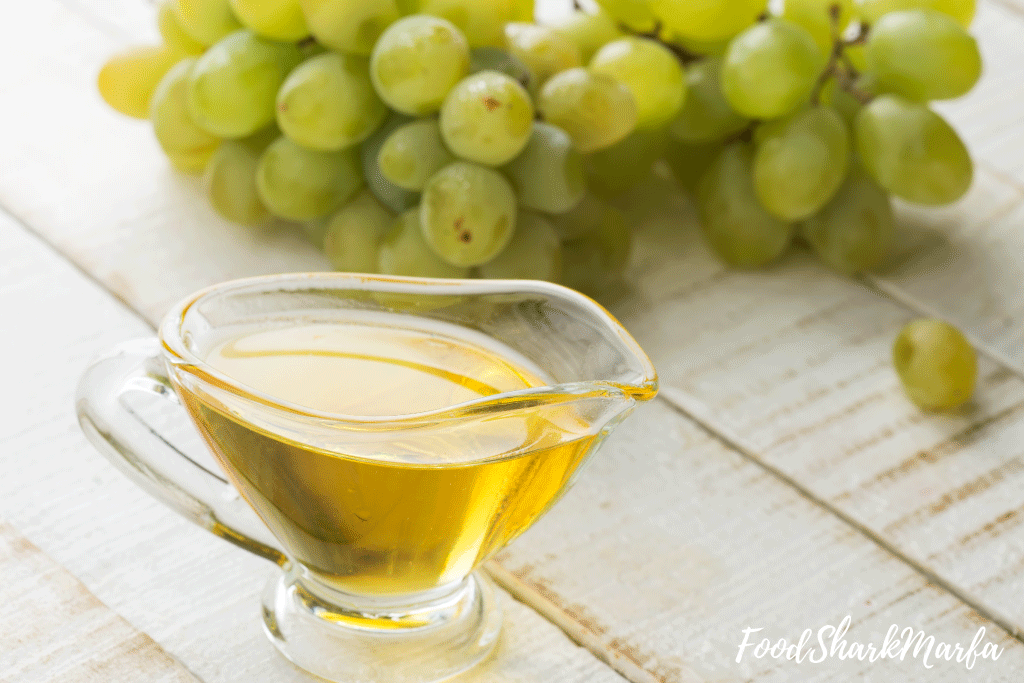 Things to Consider Before Buying Grapeseed Oil for Cooking

Grapeseed oil was first used in France and Europe in the 1930s and began to increase in popularity among chefs from the 1990s onwards.

Grapeseed oil is produced from the seeds of particular varieties of grapes which are the byproducts of winemaking. Grapeseed oils are usually sourced from countries such as Italy, Spain, France or Argentina, or other countries which are key wine producers. A small amount of grapeseed oil may be pressed in the US, but generally, the oil tends to be imported into the US where it is refined if required and then bottled for sale.

Although pressed from grape seeds, grapeseed oil does not taste of grapes. Instead it has a very neutral taste. This neutral taste limits its use as a finishing oil – unless mixed with another oil such as walnut oil – however this actually makes it incredibly versatile as a cooking oil as it is able to absorb the flavors of the food being cooked.

It can be used for baking, stir frying, high heat frying/sautéing, grilling, roasting and more.

Grapeseed oil is also good for marinades and vinaigrettes, as long as herbs, spices, oils or vinegars are used to add some flavor. It will also work well if you make your own mayo.

At present, there is little medical research in humans around the benefits of using grapeseed oil, although oils which are higher in polyunsaturated fats are generally healthier fats than those which are saturated.

One two month study examined the effects of taking either sunflower oil or grapeseed oil daily. Those overweight or obese women who took grapeseed oil had reduced levels of one inflammatory marker (CRP) and improved insulin resistance.

Grapeseed oil is very high in polyunsaturated fats; especially omega-6s. Some research suggests that an intake of more omega-6s compared to omega 3s may be associated with an increased with of chronic disease and inflammation although some controlled studies have shown that linoleic acid, which is an omega-6 fatty acid, does not cause levels of inflammatory markers to increase in the blood.

Grapeseed oil is also a source of vitamin E, in fact just one tablespoon of grapeseed oil will provide 19% of our RDA. It does not contain any significant amounts of any other vitamins or minerals. It may also contain higher levels of PAHs or polycyclic aromatic hydrocarbons which are cancer-causing agents in animals.

Grapeseed oil may also be able to reduce the body’s ability to clot blood.

The first method is of expeller pressing (or cold pressing), which uses machinery to mechanically squeeze the oil from the seeds. Expeller pressed oils are usually more expensive, and some consider expeller pressed grapeseed oil to be better quality than those produced by solvent extraction.

Solvent extraction is often known as hexane extraction as this is the most common solvent used. Some people consider solvent extracting can affect the flavor of the oil, but virtually all traces of solvent are removed during the processing.

There are also concerns around hexane and human health. Hexane or n-hexane is found in gasoline so we are regularly exposed to it in the air at gas stations and from our automobile exhausts. Some people are also exposed to it through their jobs and as far back as fifty years ago; scientists recognized that exposure to very high levels of n-hexane in industrial environments caused nerve disorders. There are limits set for exposure to n-hexane in the workplace.

When n-hexane enters the environment, most of it evaporates into the air and if it gets into the ground then it is probably broken down by bacteria. It cannot be stored by animals, fish or plants.

The Difference Between Unrefined and Refined Grapeseed Oil

A grapeseed oil may be refined or unrefined. An unrefined grapeseed oil has been bottled as soon as it has been pressed. These oils keep their flavor as well as more of their nutrients, but the smoke point of unrefined oils are often lower, and they are more likely to turn rancid once open. Although suitable for cooking with, refined oils are often better used for marinades and dressings.

A refined grapeseed oil has been processed to remove some of the compounds that break down over time. This gives an oil which has a good shelf life, neutral taste and perhaps more importantly for cooking – a higher smoke point.

The smoke point or burning point of any oil is the temperature at which it will stop shimmering and start smoking. Although oil may smoke during our cooking, especially when searing or stir-frying, when oil begins to smoke it shows that the oil is beginning to break down.

Once oil starts to breakdown it can give a burnt or bitter flavor to the food as well as releasing more molecules such as free radicals that can contribute to harm in the body.

Although it can be suitable for deep frying some foods with, as grapeseed oil is more expensive than oils such as peanut, do consider this before you decide to deep fry in grapeseed oil. When frying or even roasting, avoid heating grapeseed oil above 445°F.

You can also use a grapeseed oil marinade to prepare food before grilling and it is ideal for seasoning cast iron with.

If possible, buy grapeseed oil in colored glass bottles as this can help reduce the oil’s exposure to light. When an oil is exposed to light, it is able to break down, or turn rancid faster. Because grapeseed oil is also high in polyunsaturated fatty acids, this contributes to it spoiling faster.

When unopened, grapeseed oil should be kept in a cool dark place and once open, placed in the refrigerator or cellar. Depending on the oil itself and whether it is refined or unrefined, it may last for between six and twelve months after opening.

It is a good idea to get into the habit of checking your grapeseed oil for rancidity every time you want to use it.

In this review we have taken a good look at what grapeseed oil is and why it is becoming a popular choice for frying with. We have also discussed some of the early research available for grapeseed oil, and just why some people are concerned about grapeseed oils which are solvent/hexane extracted.

We hope that you have enjoyed reading our reviews of the top ten best grapeseed oil for cooking with and you can now choose the right oil for your cooking needs. Although it can be more expensive than other cooking oils, using a little grapeseed oil to sear the odd steak with or adding it to a vinaigrette is an ideal way to experience this neutral and delicate oil without actually breaking the bank.