Overall, the main difference between the frozen desserts sorbet and sherbet is dairy content. Sherbet contains some milk or cream while sorbet does not contain any dairy. This difference also gives sherbet a creamier texture.

Both sorbet and sherbet are usually fruit flavored and both can be served as desserts or used in shakes, smoothies and more, but sorbet can also be used as a traditional palate cleanser between the main courses of formal dinners. There is also a type of candy called sherbet that is popular in some parts of the world.

Unfortunately much of the history of sorbet and sherbet appears to be woven from fact and myth, but we do know that sweetened fruit drinks were around in ancient times and frozen desserts evolved in Roman times, so somewhere between the two, sorbet and sherbet evolved into today’s summer favorites.

Sherbet was originally sweetened fruit drinks served in various parts of the world. Alexander the Great served a form of sherbet made with fruits and flower petals and there were also old Middle Eastern sweet fruit drinks called sharbat in Arabic or şerbet in Turkish. Sharbat eventually made its way into Europe. As availability and storage of ice became easier, people began to freeze sharbat and it became the form of sherbet that we know and enjoy today. The word sharbat actually means ‘sweet snow’.

During Roman times, the Emperor Nero was said to require buckets of snow to be passed from the mountain tops to his banquet hall where it could then be mixed with wine and honey. This seems to have been one of the earliest types of sorbet.

Just What is Sorbet?

Sorbet is a frozen dessert made with fruit puree or juice and sugar. There can sometimes be extra flavorings, water or acid added as well. At one time, sorbet was eaten as a palate cleanser between different courses of large meals and some restaurants do still offer sorbet between main courses. It was only during the 17th century in French cafes, that sorbet began to be sold as a dessert. 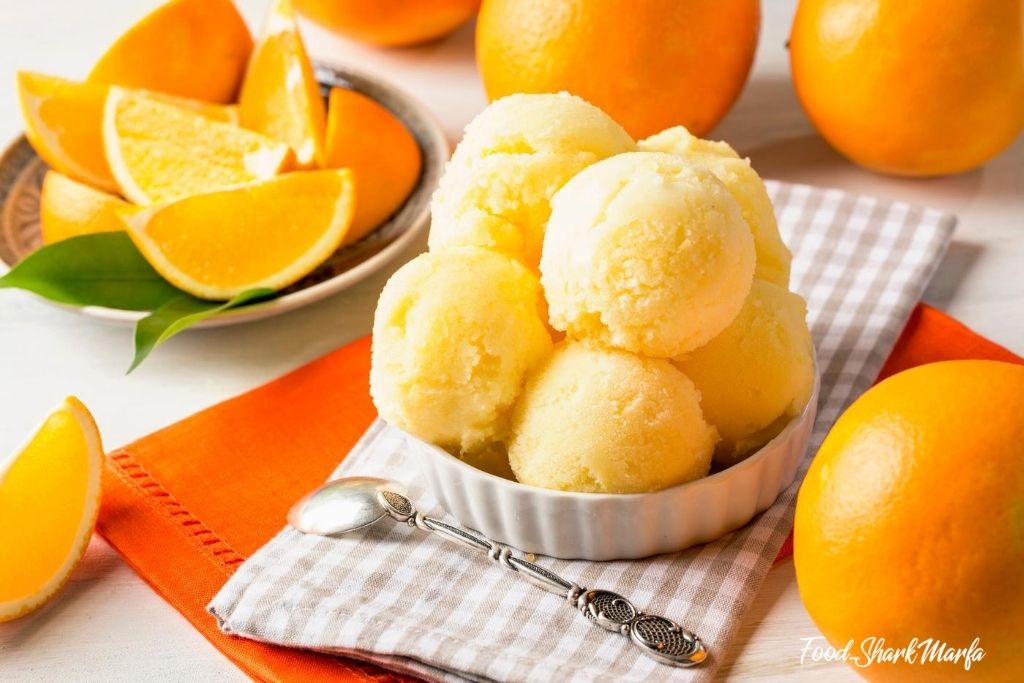 Sorbet is traditionally gluten free, dairy/lactose free and vegan and because it does not contain any fat, it is also low fat. It is high calorie though as it is made with sugar and typically high-sugar fruits.

How is Sorbet Different to Granita?

Like sorbet, Italian granita is a low fat dessert made with fruit and sugar and does not contain any dairy fat. The difference between sorbet and granita is how they are made and frozen. Unlike sorbet, granita is not churned before freezing, instead the mix is placed straight into a pan and the freezer. As the mix freezes, it is regularly scraped or stirred with a fork to make coarse flakes or crystals. This makes granita, a frozen dessert which is crunchy and fluffy and looks more like shaved ice. 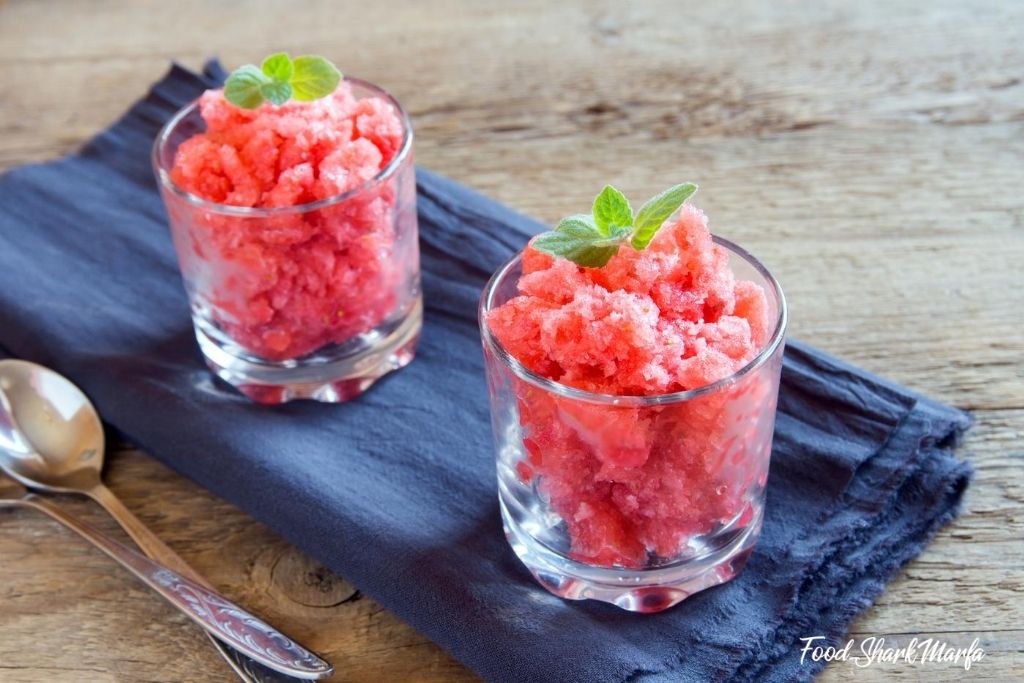 Like sorbet, sherbet is typically made with purees or juice from fruits such as lemons, limes, oranges, strawberries, blueberries, along with a small amount of dairy fat in the form of milk, cream or buttermilk. It may also contain gelatin or egg whites to give a finer texture. 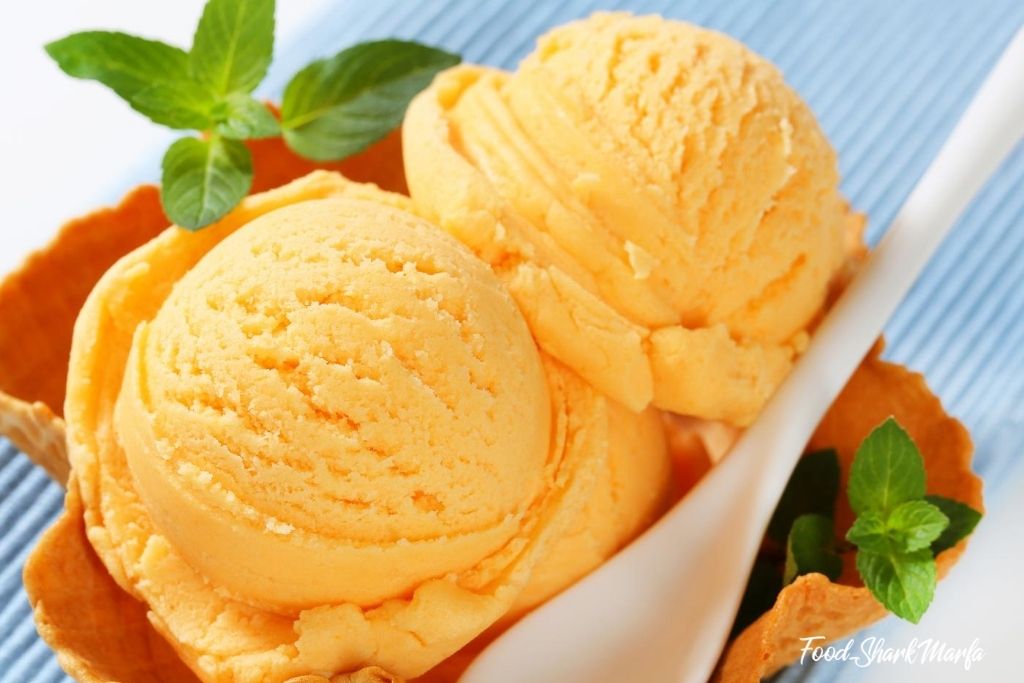 Rainbow sherbet is probably still one of the most popular sherbets available and along with other sherbets can be found in the freezer section of the store alongside the ice creams and sorbets.

What Is the Difference Between Candy or Powder Sherbet and Frozen Sherbet?

Yes, there are two distinct types of sherbet! Sherbet candy or powder is a fizzy candy commonly found in Europe and Commonwealth countries. Back in the 19th century, sherbet powder (also known as soda powder) could be added to water for a fizzy drink before carbonated drinks became common.

Sherbet powder is usually made with a base such as sodium bicarbonate and an acid such as tartaric acid along with flavorings and sweeteners. Once the sherbet powder comes into contact with liquid – such as water or saliva in the mouth - the powder reacts and fizzes. 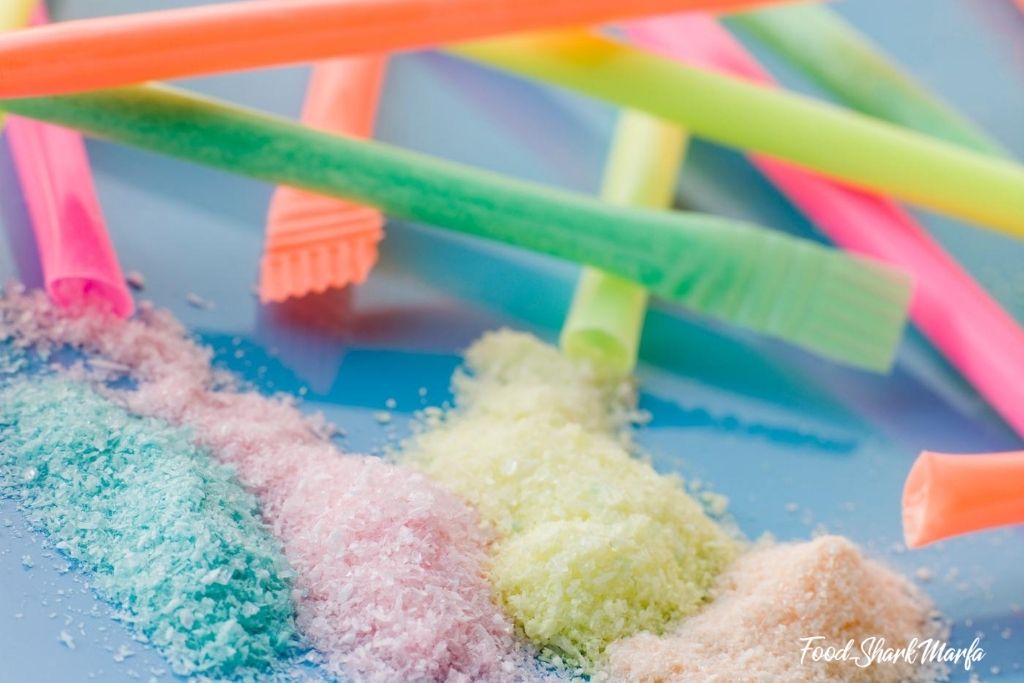 Sherbet powder is popular candy in the UK and is often sold with fruit pops or even black licorice for dipping with. Another popular candy is sherbet lemons. Sherbet lemons are sour lemon hard candies with a sweet and fizzy sherbet center. Perhaps the most famous fan of sherbet lemons is Albus Dumbledore from the Harry Potter series!

How Is Sherbet Pronounced and Why Is It Sometimes Called Sherbert?

Sherbet is pronounced as sher-but.

There were two spellings of sherbet - sherbet and sherbert - around in the 18th century. Sherbert then faded out of use but reappeared in the 20th century and is still used by some people in place of sherbet. Strictly speaking, sherbet is the correct spelling.

What is The Difference Between Sherbet and Gelato?

Gelato is another Italian dessert. Containing around 4% to 9% butterfat, gelato has a lower dairy content than ice cream but more than sherbet which gives it a creamier flavor. Gelato also has a thicker texture than sherbet and ice cream as it is churned slowly during manufacture to prevent too much air from getting into the mix. 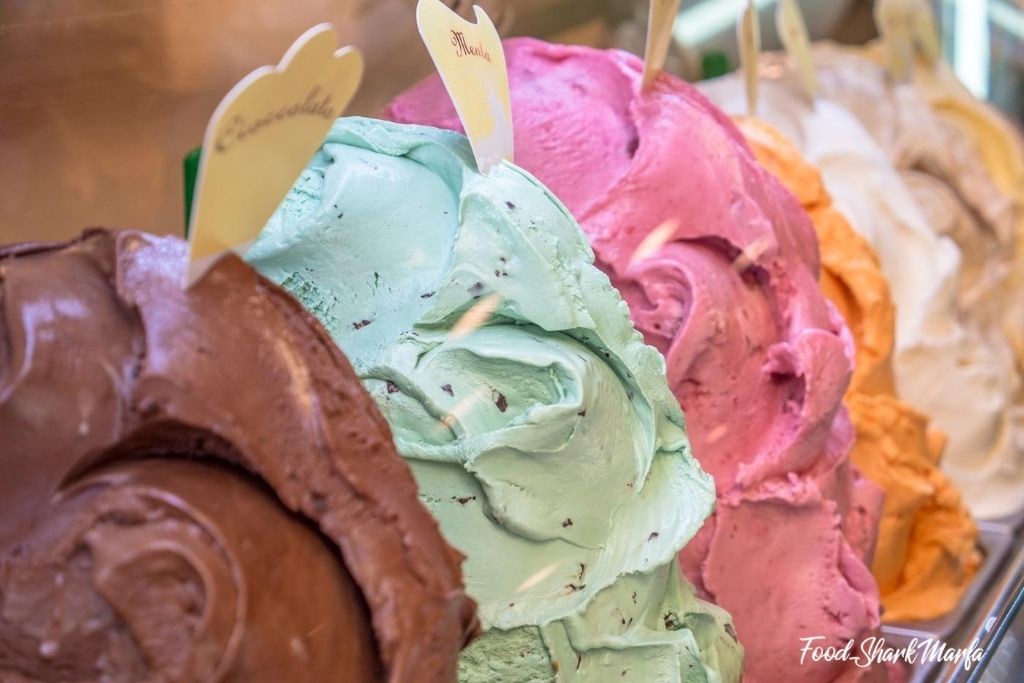 Unlike sherbet, gelato is not restricted to mainly fruit flavors and can be made with many different flavors just as ice cream is.

Can You Use Sherbet in Place of Sorbet?

As a dessert, yes, sherbet can usually be used in place of sorbet as both are fruit flavored and served at a similar temperature. Remember that sherbet does contain dairy though so may not be suitable as a substitution in all cases.

When you do use sorbet or sherbet, remember they do not contain the fat that regular ice cream does which makes them harder to scoop. To make it easier, always take sorbet or sherbet out of the freezer and place it on the countertop at least five minutes before you want to serve it as this will give it chance to soften. Leaving sorbet and sherbet out for a while also allows the richer fruit flavors to come through as they begin to warm up.

As well as buying sorbet and sherbet from the store, they can also be made at home – an ideal way to use up some of those summer fruits - although to make frozen desserts easily at home, you will need a mixer attachment or good quality ice cream maker .

Although historically, it is unclear where sorbet and sherbet became two different foods, they are similar in that both sorbet and sherbet are usually fruit flavored, contain sugar and can often be used in place of each other. However, sherbet does contain between 1% and 2% dairy fat which makes it unsuitable for dairy/lactose free diets and sorbet can also be served as a palate cleanser between main courses, which sherbet cannot.
5/5 - (1 vote)

Talisha regularly publishes healthy eating and healthy recipes online with a focus on how families can still eat well even when living on a tight grocery budget. With a background in food science, Talisha is big Knicks fan and helps coach kids in her local community.

Talisha regularly publishes healthy eating and healthy recipes online with a focus on how families c...