The main difference between pickles and cucumbers is that cucumbers are vegetables (or more strictly, fruits) usually consumed raw on salads and sandwiches, while pickles are cucumbers which have undergone processing or fermentation with brine or vinegar to turn them into pickles. 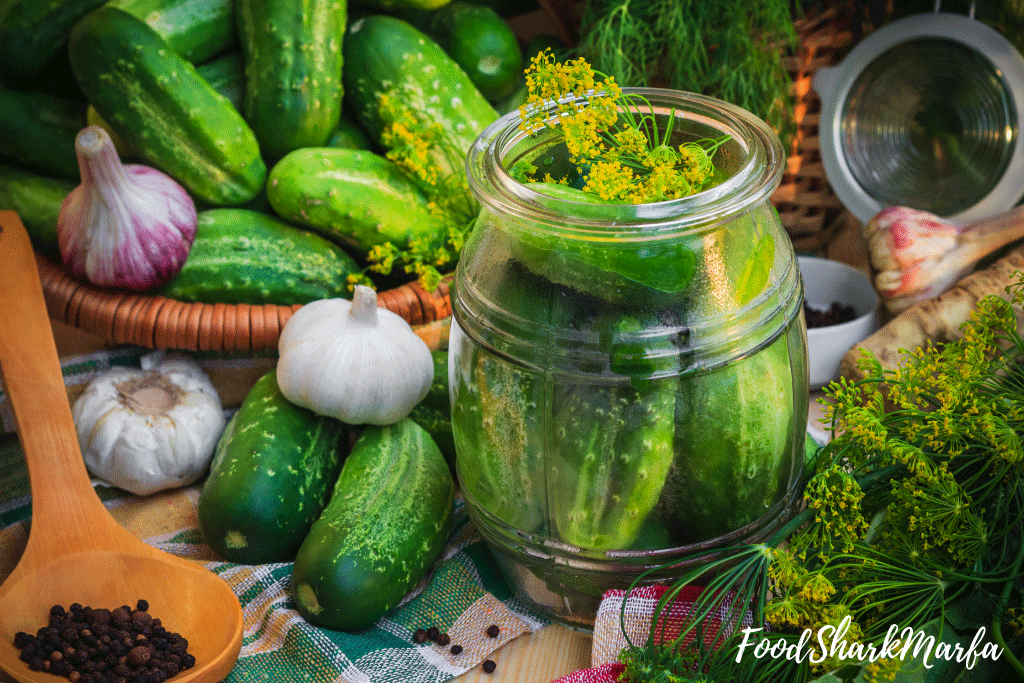 For a more detailed answer to the pickles vs cucumbers debate, we will need to first look at exactly what cucumbers are, before considering how they are altered in processing to become pickles.

Alongside this, I also consider some other important questions such as whether cucumbers are a fruit or a vegetable, just what are the differences between baby pickles and gherkins and why pickles can pack more of a nutrition punch than cucumbers!

Is the Cucumber A Vegetable or A Fruit?

Cucumbers belong to the gourd or Cucurbitaceae family – the same family as squash, zucchini, pumpkin and melons – and plants in this family are vined ground creeping plants. Once cucumber plants have flowered, the cucumbers with their internal seed stash develop. This means that botanically, cucumbers are categorized as a fruit rather than a vegetable, because cucumbers grow from the flower of a plant and contain seeds.

However, for culinary reasons cucumbers are usually referred to as a vegetable, mainly due to how we prepare and consume them. 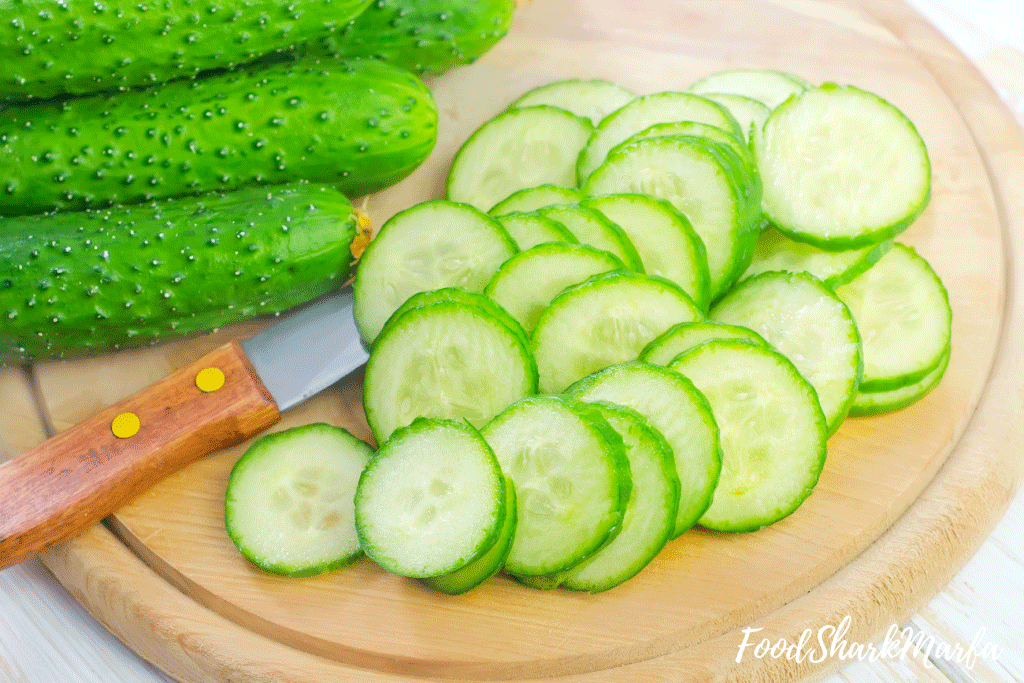 Slicing cucumbers such as garden cucumbers (or Cucumis sativus) are grown to be consumed as fresh cucumber and usually have thicker skins and are larger than the pickling cucumber varieties grown for processing into pickles.

Why Are Some Cucumbers Called Burpless Cucumbers?

Burpless cucumbers do not cause as much gas after eating. The gassiness from cucumbers is caused by cucurbitacin, an organic compound found in cucumbers which also gives cucumber its sometimes bitter taste.

As cucumbers age, they naturally become more sour and bitter as levels of cucurbitacin build up. This is why slicing cucumbers are usually harvested and sold when slightly underripe to keep the cucurbitacin levels down.

Although the leaves, roots and stems of the plants contain the higher levels of cucurbitacin, some makes its way into the cucumber itself, causing the gassiness after eating. If you are prone to suffering with gassiness from cucumber, there are a couple of things you can when preparing cucumber to cut down on the gas.

As cucurbitacin tends to accumulate at the stem end of the cucumber, make sure you trim at least half an inch from this end and as the peel and the lighter green part just under the skin is also a source of cucurbitacin, if you slice away the peel away from the flesh, you should be able to enjoy the flesh of the cucumber without suffering from as much gas.

English cucumbers are often classed as a burpless slicing cucumber. Not only do these have thinner skins, but they usually taste sweeter than other varieties of cucumber. Whichever type of cucumber you buy, to keep it ats best, store in a cool place or in a breathable bag in the crisper drawer of the refrigerator and always away from any apples, avocados, bananas and tomatoes. Fresh cucumbers may keep for as long as a week in the refrigerator but are usually at their best when eaten within a couple of days.

When Did Cucumbers Become Pickles?

Pickles, or to give them their full name, pickled cucumbers; are cucumbers pickled in brine, vinegar or any other solution.

In theory, any type of edible cucumber (including slicing cucumbers) can be pickled, but cucumbers that are thicker, shorter and irregularly shaped with bumpier skins are traditionally usually used for pickling.

The name pickle comes from pikel, an Old English word meaning a spicy gravy or sauced served with meat and also from pekel, a Middle Dutch word meaning spiced brine. Pickling is one of the oldest ways to preserve food and has been done for around 5,000 years.

What is The Difference Between Cucumbers Pickled in Vinegar and Brine?

Cucumbers pickled in vinegar are often known as refrigerator pickles and pickling as a process produces crispy pickles quickly. In comparison, brined pickles are cucumbers that are fermented in salt and water only and have a sour taste. During the fermentation process, naturally occurring bacteria consume the sugar (or added sugar) from the cucumber (or other vegetable or fruit being pickled) and this allows it to slowly ferment until turned into tangy pickles.

The fermentation also allows the nutritional value of the pickles to change and as we will see in a later section, in some cases become improved when compared with cucumbers. 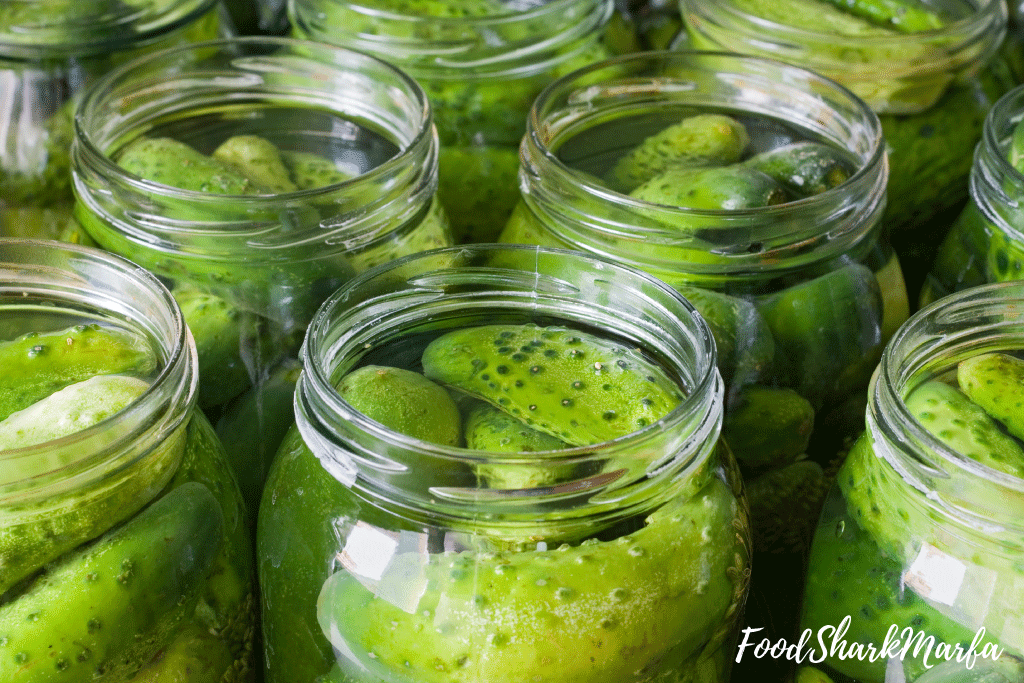 Dill pickles contain cucumbers seasoned with dill seeds and other seasonings such as garlic. Kosher dill pickles are available as fully fermented or ‘full-sour’ or the crisper and brighter colored ‘half-sour’ pickles.

Some pickles such as overnight dill pickles or cukes are made with a combination of vinegar and brine. Often found in the deli, these types of pickles are made from cucumbers that are first coated in vinegar and then soaked in brine overnight or for up to two days.

Sweet pickles contain added sugar and may also contain other flavorings such as mustard seeds or cinnamon. Of the sweet pickles, bread and butter pickles are probably one of the most popular; as not only perfect on sandwiches and burgers, they make a great sweet and sour dip.

If you have ever wondered why they are called bread and butter pickles, you will not be the only one! There are two possible origins for the name, with the first one being through an Illinois couple who registered a trademark for their family pickles in 1923 and this couple had an agreement with their local grocer to exchange their pickles for groceries – including of course bread and butter! The second potential origin of the name is that it came into use during the Great Depression as unlike many other foods at the time, they were an affordable filling to eat between two slices of buttered bread!

What is The Difference Between Baby Pickles, Cornichons and Gherkins?

Baby pickles are pickles made with baby cucumbers and cornichon is the French word for pickles. Cornichons are around 1½" in length and full flavored. They may also be known as gherkins, but gherkins are a completely different type of cucumber compared to true cornichons. Gherkins are a type of cucumber that are picked young just to be pickled. Gherkins can be raw or cooked and native to North America, these have a strong flavor.

Are Pickles More Nutritious Than Cucumbers?

In terms of overall nutrition, both cucumbers and pickles are low calorie. One cup of sliced cucumber contains 16 calories and a cup of dill pickles contains 19 calories. If the pickles are sweet pickles, then the addition of the extra sugar pushes the calorie content up to around 139 calories per single cup serving.

Much of the difference in nutrition between cucumbers and pickles is when the pickles have been fermented. The bacteria involved in the fermentation process offer additional nutritional value and they also behave pro-bacteria in our gut. This means that consuming fermented pickles may help support treatment of chronic gut issues such as Crohn’s disease as well as aiding general digestion. Some research has also made links between pickles and a reduced risk of developing yeast infections.

Cucumbers are naturally low in sodium while a cup serving of dill pickles contains 59% of our daily sodium limit, which is why those on lower sodium diets or with cardiovascular or blood pressure problems should be careful not to consume too many pickles too frequently.

As pickle juice is a source of sodium as well as electrolytes, some consider that a little pickle juice after exercise, or when suffering cramps may be helpful. It should be noted that any of these benefits, or benefits for gut health will only be possible if the pickles are fermented, so do take time to read the labels if you are changing pickles.

Pickles vs Cucumbers – A Summary

Although pickles can be high in sodium and may also be high in sugar if sweetened, they make a tasty topping on many foods and if they are also fermented, they may just help support gut health.

I hope you have enjoyed reading about pickles vs cucumbers and that you have found the answers to some of the questions you may have had but were too afraid to ask. Do feel free to share this article with your friends and I would love you to leave any comments below around cucumbers or pickles.

Chris has a degree is in community nutrition and he currently works with a not-for profit organization which supports family health in the community. He is also a keen promoter of ways to eat healthier on a budget – providing advice on buying and cooking healthy foods on a budget, how to successfully freeze most foods and many other handy ways to help keep food bills down. Once he has got a long cycle out of the way, Chris spends the rest of his weekend cooking up a storm with his partner Jo and their three dogs, Bobby, Grayson and Junior.

1 thought on “Pickles vs Cucumbers – Are They Really That Different?”

Chris has a degree is in community nutrition and he currently works with a not-for profit organizati...