Mushrooms are earthy and savory with quite a meaty texture which makes them popular with many of us in both meat and vegetable dishes. Mushrooms pair well with steaks, pork, veal, chicken and seafoods as well as vegetables such as onions and asparagus. They also go with richer flavors such as creams, butters, eggs and cheeses as well as red or white wine or sherry. If you prefer to keep it simple, they can also be eaten raw as part of a seasonal salad. 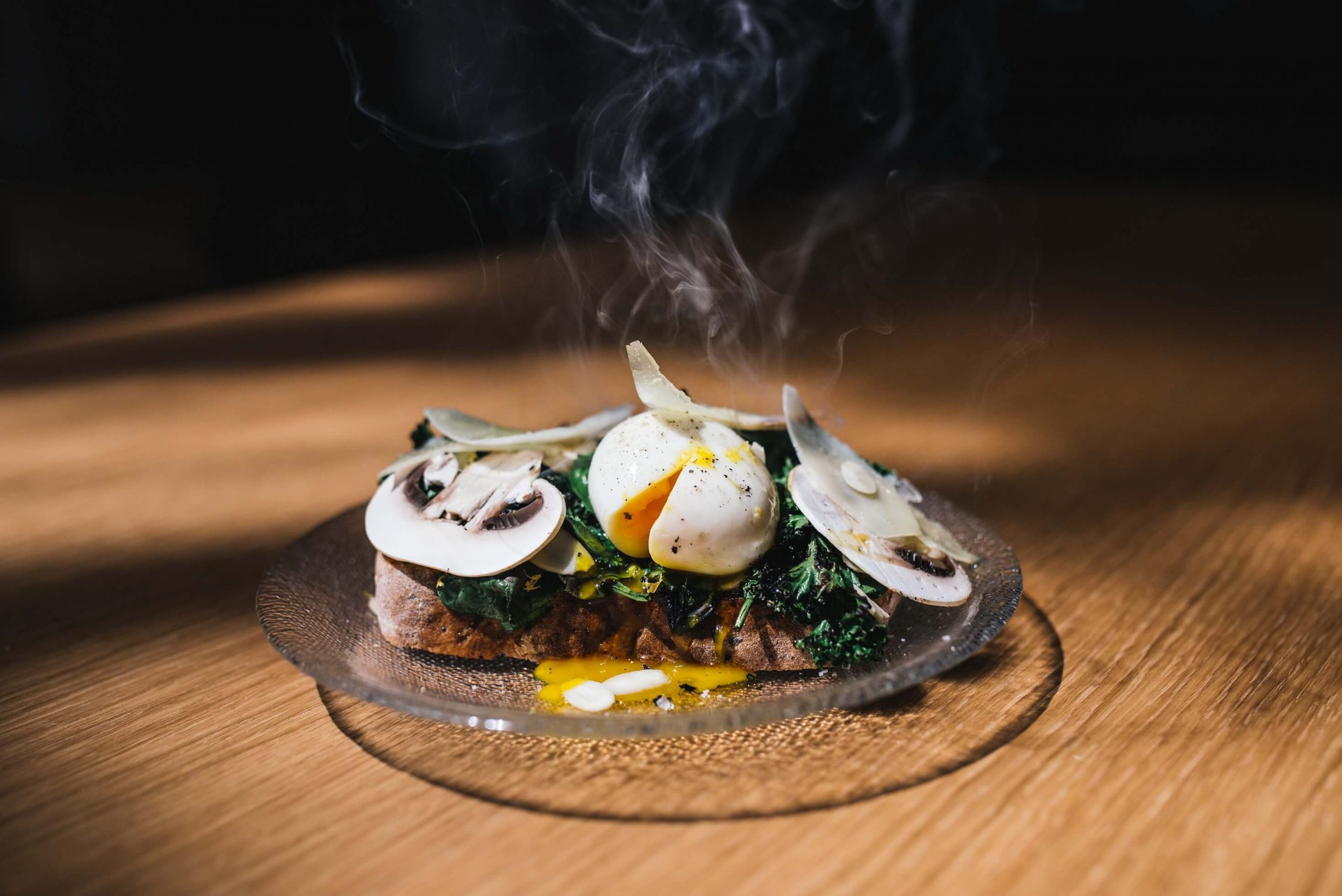 Garlic, salt and pepper is common seasoning for mushrooms, but they also taste well when seasoned with tarragon, rosemary, dill, parsley, marjoram, oregano or chives.

It can be more difficult to plan to buy mushrooms in advance as they soon sweat and start to become slimy when left in the plastic wrapping from the grocery store. This plastic wrapping not only keeps in excess moisture but also stops the mushrooms from breathing.

In this tutorial we offer an overview of mushrooms and provide a step by step method for storing fresh mushrooms in the refrigerator and a second for preparing them to store them in the freezer. Do continue reading to not just learn more about mushrooms, but also how to store them to keep them at their best.

Some of The Different Types of Mushrooms

Mushrooms are a member of the fungus kingdom along with yeasts and molds. The most common mushrooms available at the grocery store are white button mushrooms or baby portobellos. Also known as creminis, these are about the same size as button mushrooms but brown. If you are lucky, you may also be able to find portobello mushrooms, and the large size of these makes them ideal for stuffing and baking or grilling. 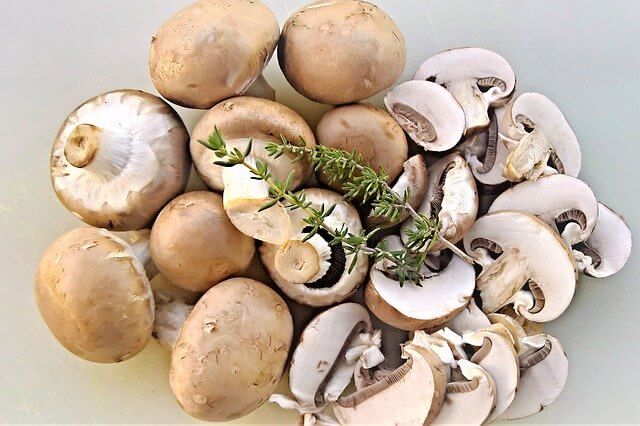 Interestingly, all three of these mushrooms are from the same Agaricus bisporus species, they are just picked at different stages of maturity. When they are immature, if they are white, they are button, if brown, creminis. As buttons and creminis mature, they grow into the larger portobello mushrooms.

Although there are around 2,000 or so species of edible mushrooms, very few are available commercially. To obtain different some different species of mushrooms, unless you are lucky enough to be an experienced forager (or know someone who is) you will need to either visit a specialty grocery store or your local farmers’ market. 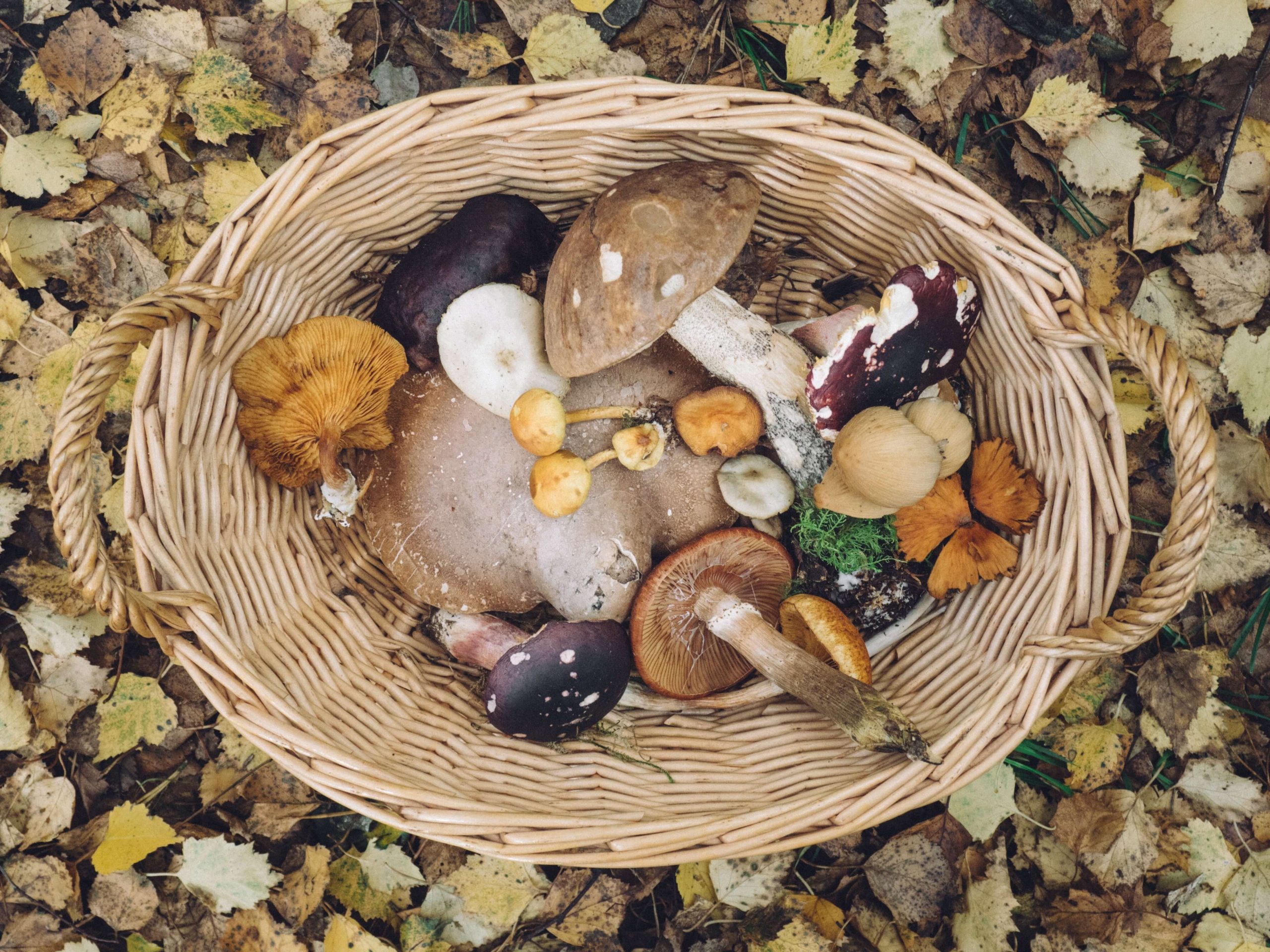 Oyster mushrooms are wild mushrooms that vary in size and as they are quite firm with more of a delicate texture, they can be cooked in a variety of ways including on the grill.

Chanterelles are commonly within the shade range of yellow to orange or peach colored, but they can also be red or black. Chanterelles are frilled and tend to have an apricot aroma to them, and black chanterelles, also known as black trumpets have a complex and almost truffle-like flavor. Because like oysters and others, these are wild mushrooms, they are often quite expensive to buy and are best served up simply, just sautéed with some butter or oil and a little garlic. 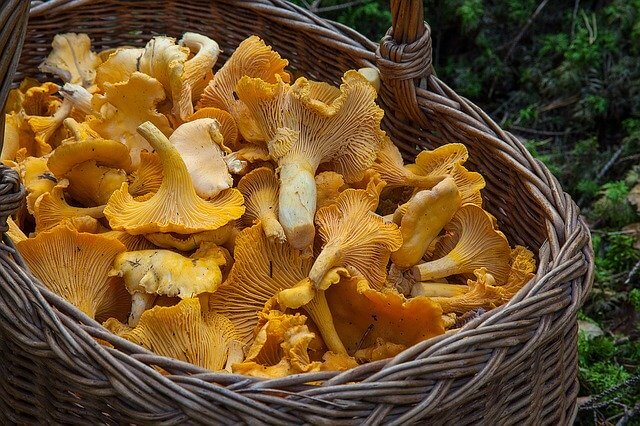 Available in spring, morel mushrooms have a nutty flavor that lends itself to simply being sautéed in butter or oil with a little seasoning.

In 2018, mushrooms accounted for sales of $1.85 billion in North America, and the popularity of mushrooms will continue to grow (pardon the pun!) as the demand for frozen or canned produce increases alongside more consumer awareness of the benefits of mushrooms in the diet.

Benefits of Mushrooms in Our Diet

Although the nutritional benefits vary slightly depending on the species of mushroom, they are a source of antioxidants such as selenium and vitamin C. These antioxidants help to prevent and repair some of the damage in our bodies which is caused by free radicals – molecules associated with aging and many health conditions.

Mushrooms are a source of potassium, which plays a role in regulating blood pressure and fiber, which is often in the form of beta-glucans – linked with lower cholesterol levels. 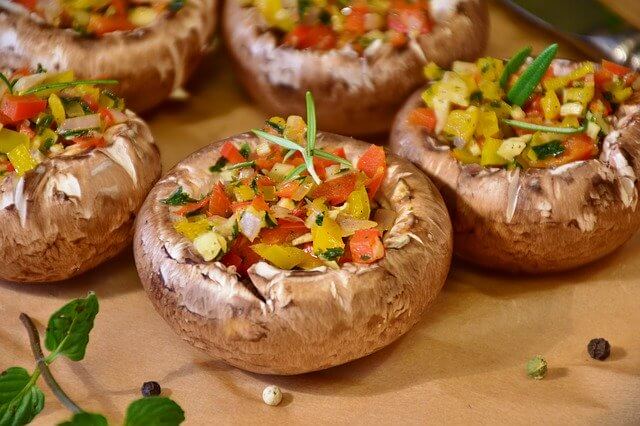 Mushrooms also contain B vitamins which help the body to utilize energy from the diet, and they are the only non-fortified and vegan source of vitamin D in the diet. 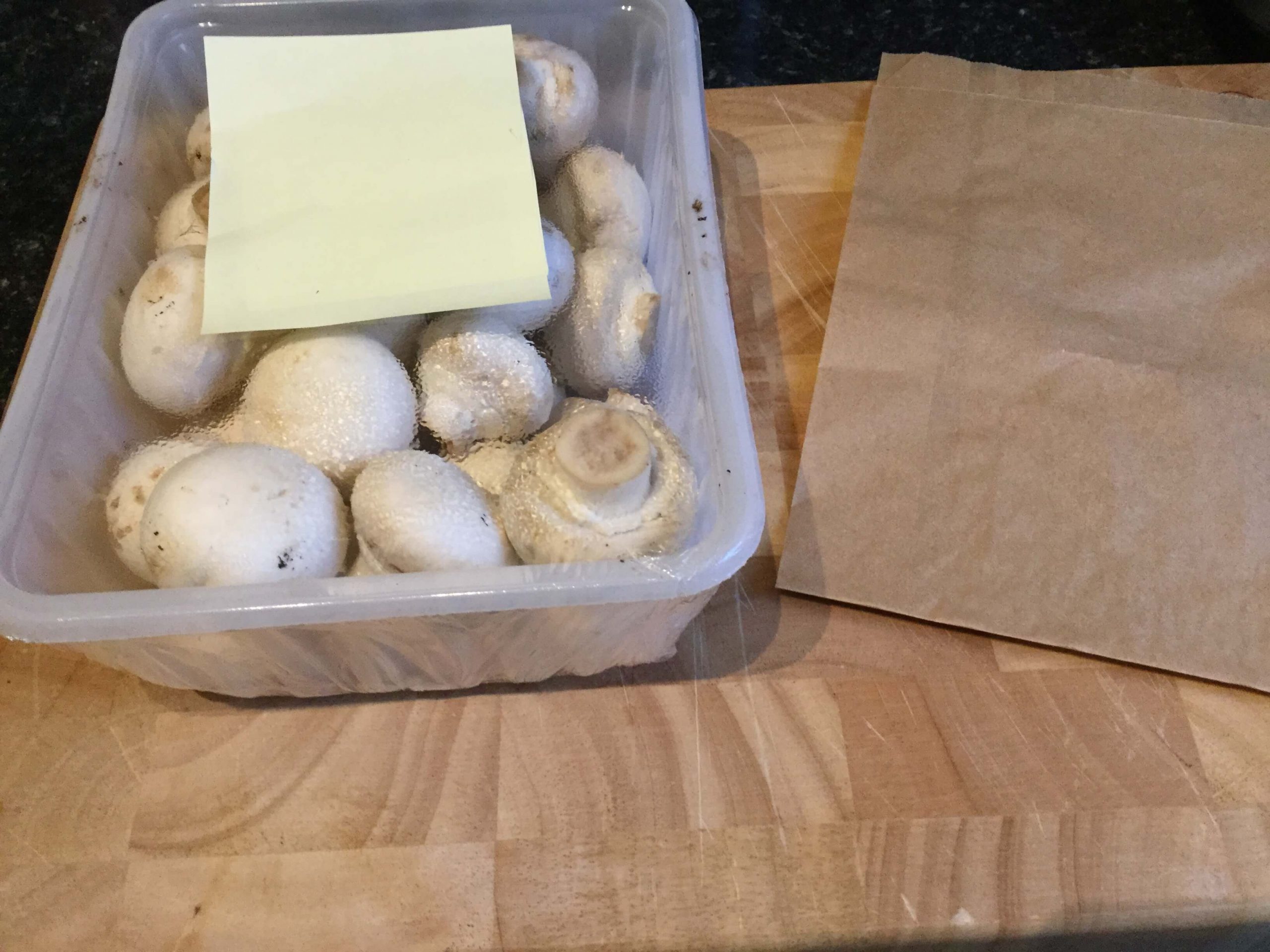 Step 1: Remove packaging: Carefully undo all of the plastic packaging from the mushrooms. 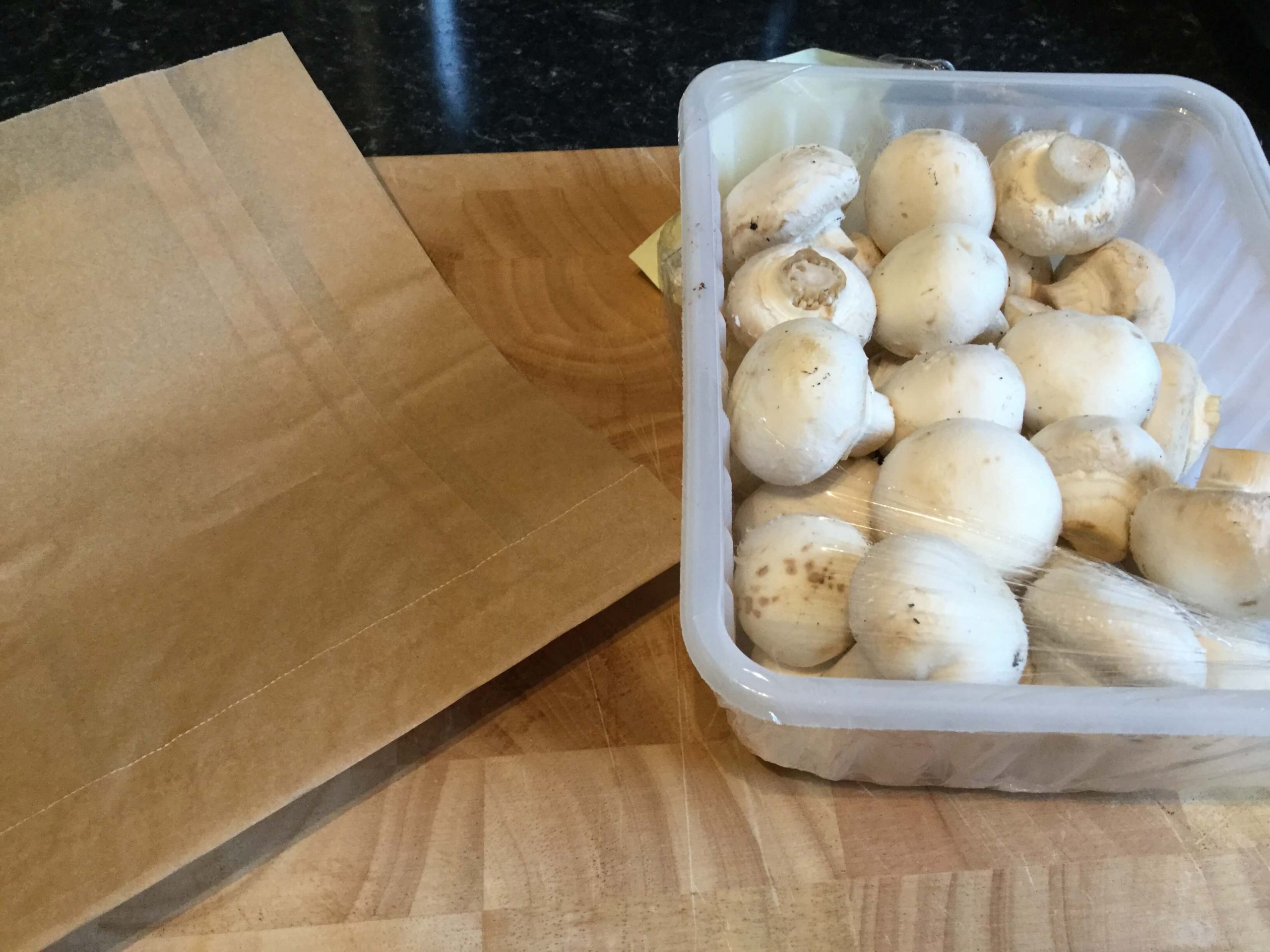 Step 2: Place in paper bag: It is important not to wash the mushrooms before transferring them to the paper lunch bag. If you do, they will soon become slimy.

If they are very dirty you can just brush off some of the excess dirt with a mushroom brush or similar or wipe them over with a dry paper towel.

If you have bought commercially grown mushrooms, it is good to know that the mushroom growing materials are pasteurized and sterilized to remove any microorganisms that could cause foodborne illness. As recently as 2018, there have been no known incidents of foodborne illness acquired from consuming fresh mushrooms commercially produced in North America 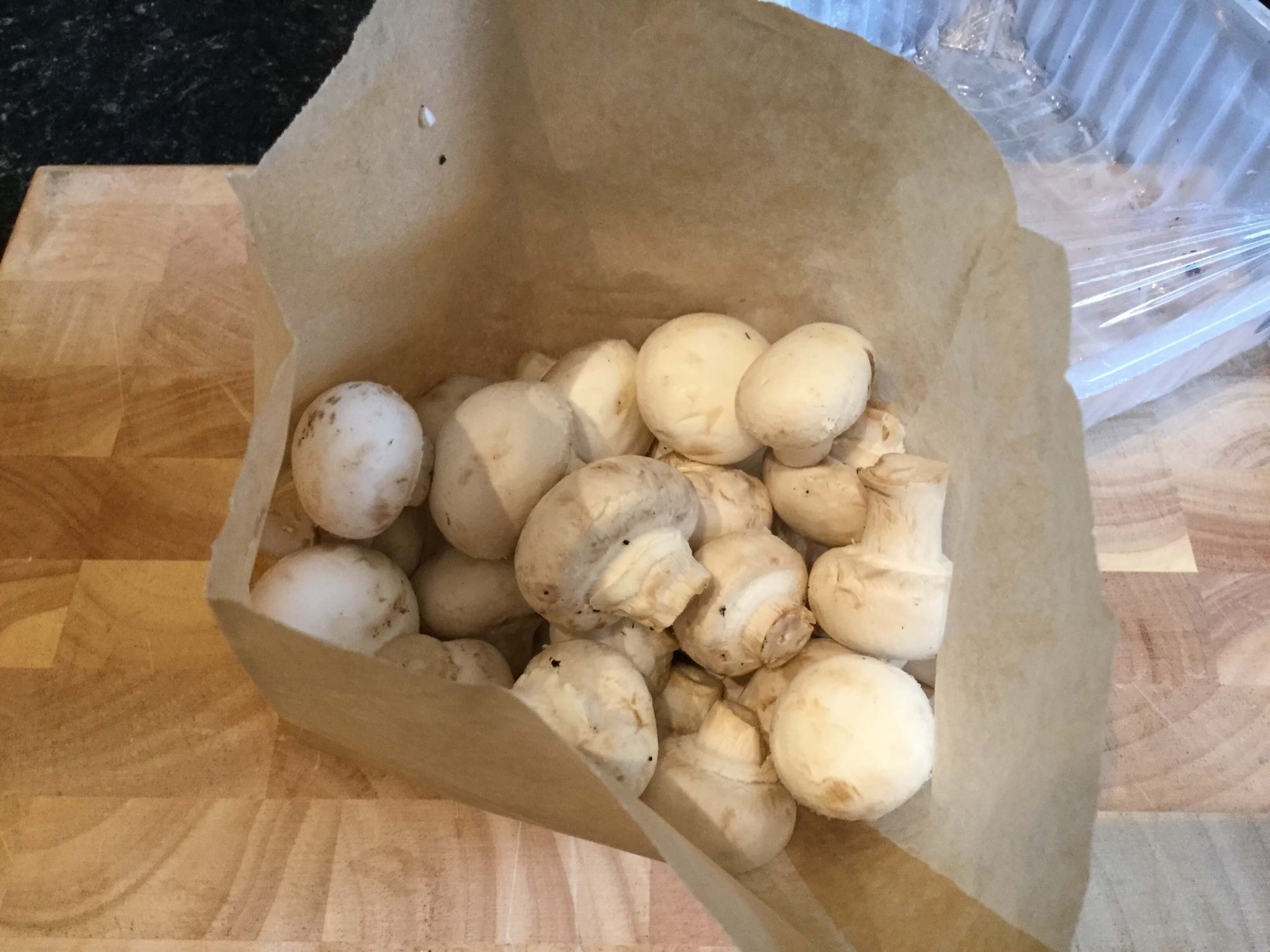 Step 3: Store open bag in refrigerator: The paper bag should be left open as this will stop excess moisture from being trapped in the bag which the mushrooms would otherwise absorb. Leaving the bag open will also allow ethylene gas (which mushrooms release after picking) to escape. Some prefer to fold the top of the bag over, but if you do this, puncture the paper bag to allow the moisture and ethylene gas to escape.

Pro tip: When storing mushrooms, take extra to not stack anything on top of them. Not only do squashed and bruised mushrooms look far from appetizing, they won’t keep as long as undamaged ones will. 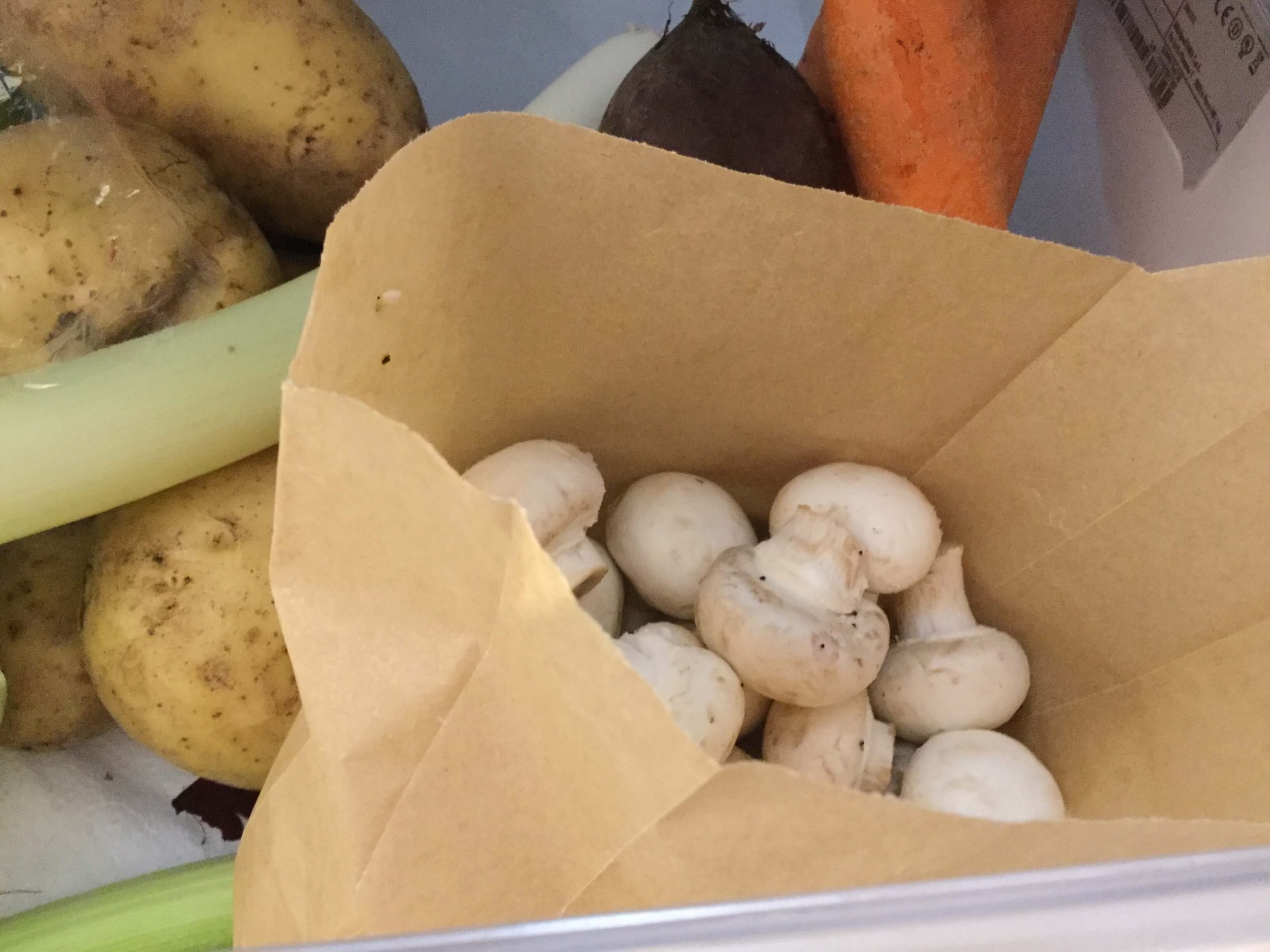 Mushrooms should keep for around one week in the refrigerator, but some estimates can go as high as ten days. 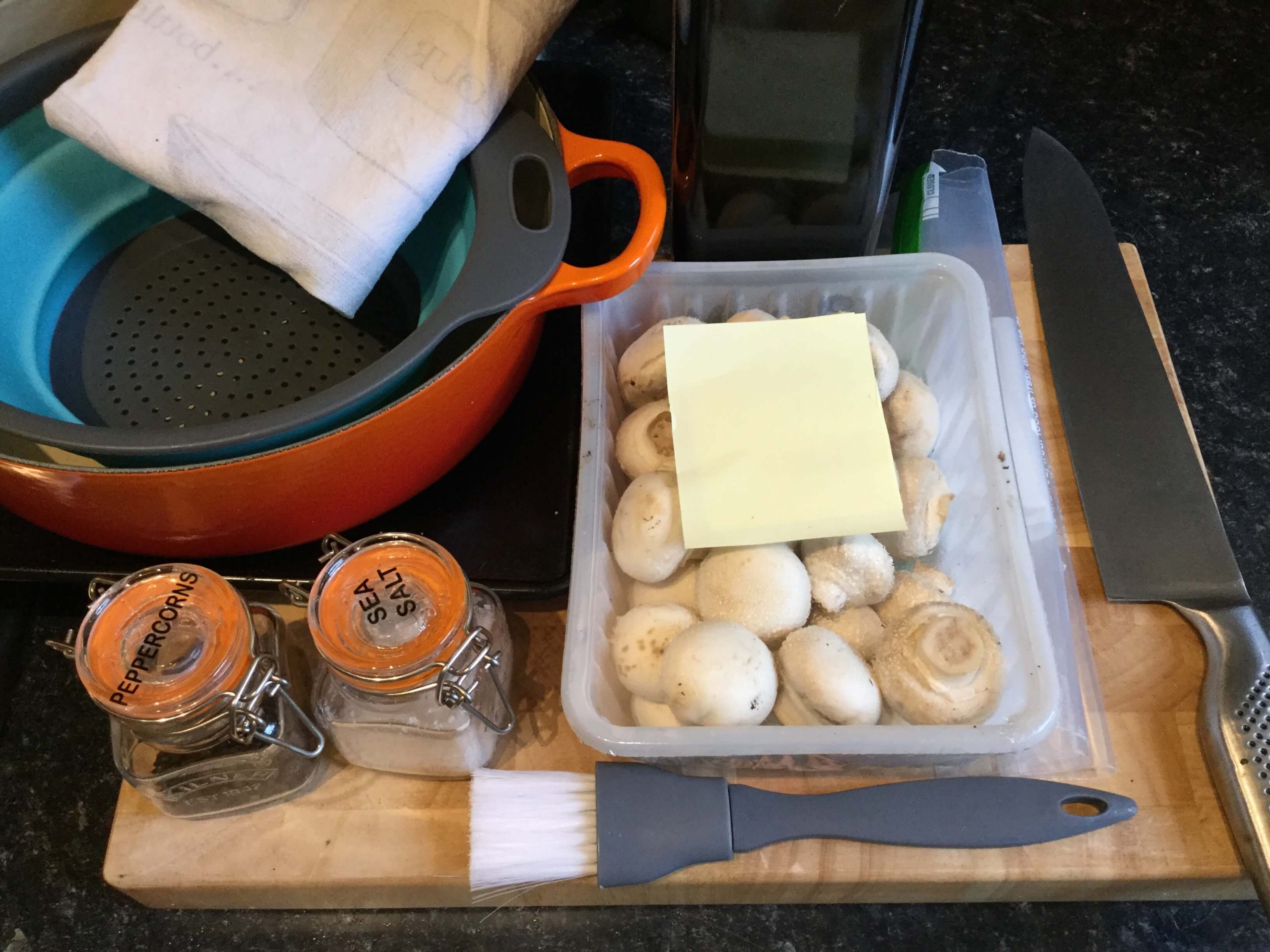 Most mushrooms will freeze well, but you should do it as soon as you get them home rather than leaving them in the refrigerator for a few days. I also utilize freezing if my friends have been foraging and bring me some wild mushrooms. I prefer to eat these fresh but also like to store the excess in the freezer so they can be added to dishes during winter.

Pro tip: Mushrooms must be cooked before they are frozen as cooking prevents the enzymes in the mushrooms from continuing to degrade the flesh. Pre-cooking mushrooms before freezing also stops them from absorbing too much moisture as they defrost.

Step 1: Clean the mushrooms: Remove packaging from the mushrooms and rinse them well under cold water. Do not worry if there is still some dirt on them at this point, this will be removed in the next step.

Pro tip: If you are cleaning foraged or specialty mushrooms purchased from a farmers’ market, you may need to soak them in water for a short while – especially if they are frilly mushrooms such as chanterelles or oysters. A soak will remove any excess debris or even stray insects! 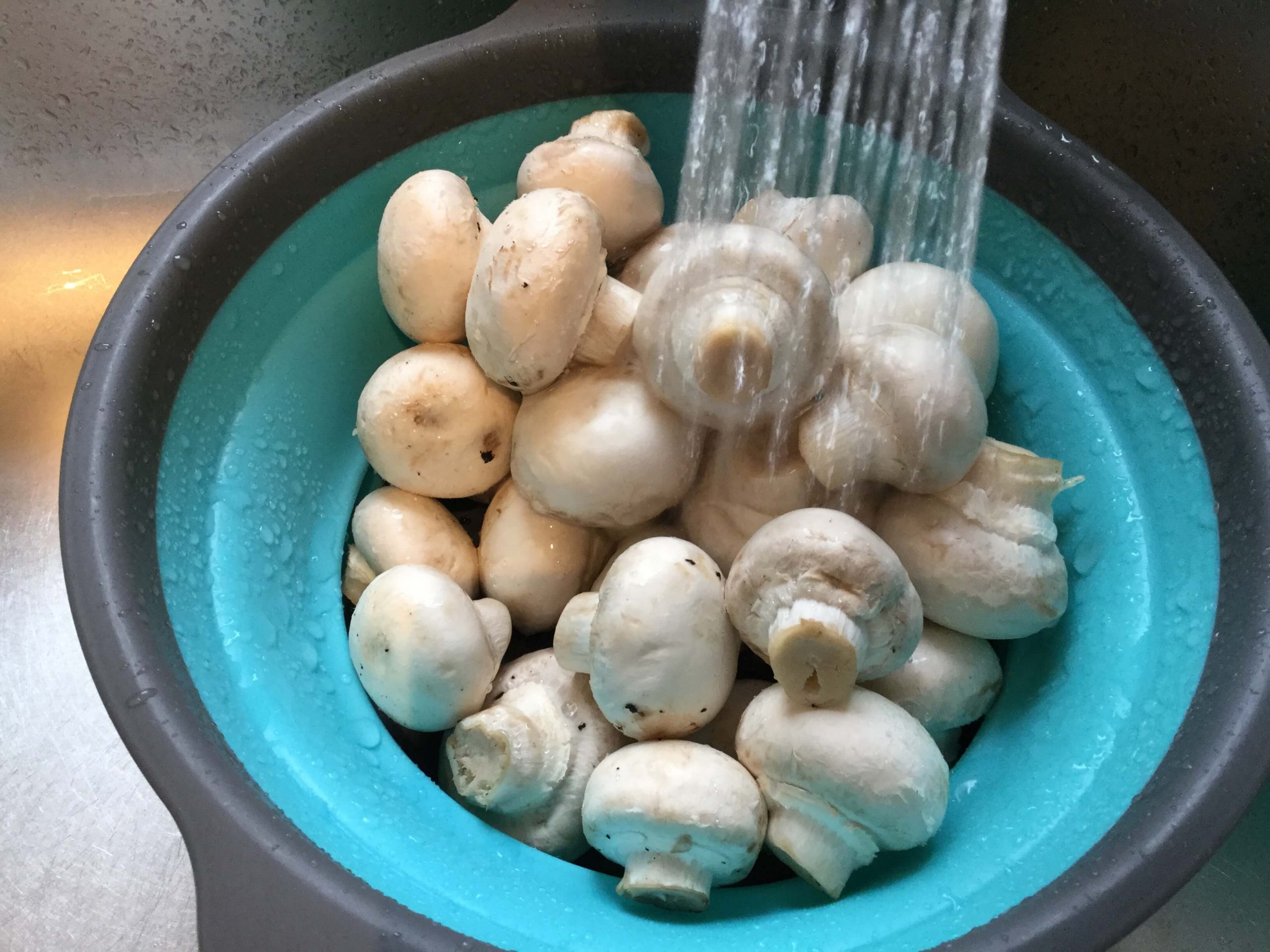 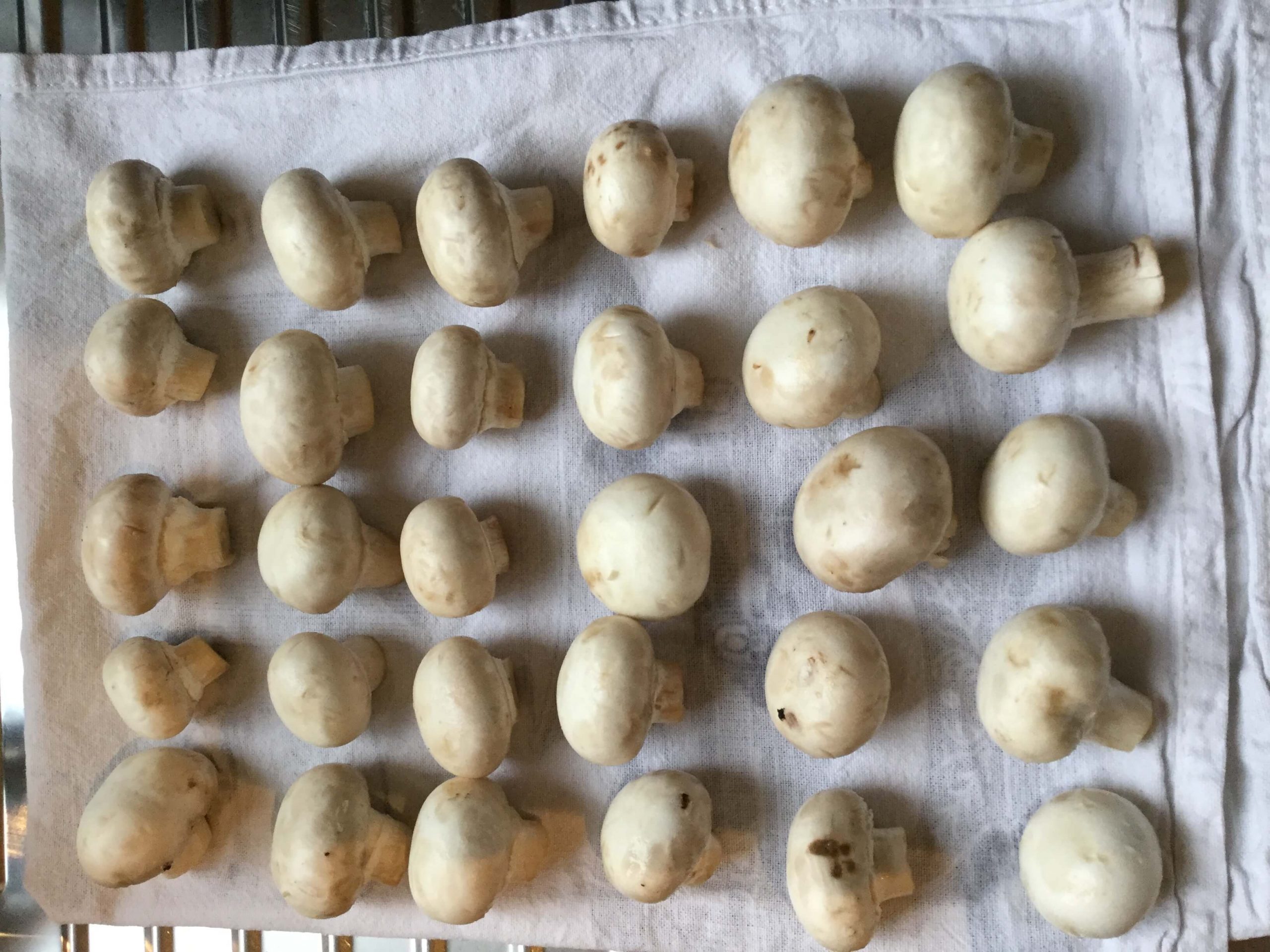 Step 3: Brush off remaining dirt: When the mushrooms are dry, use the brush to gently remove any lumps of dirt still on them. 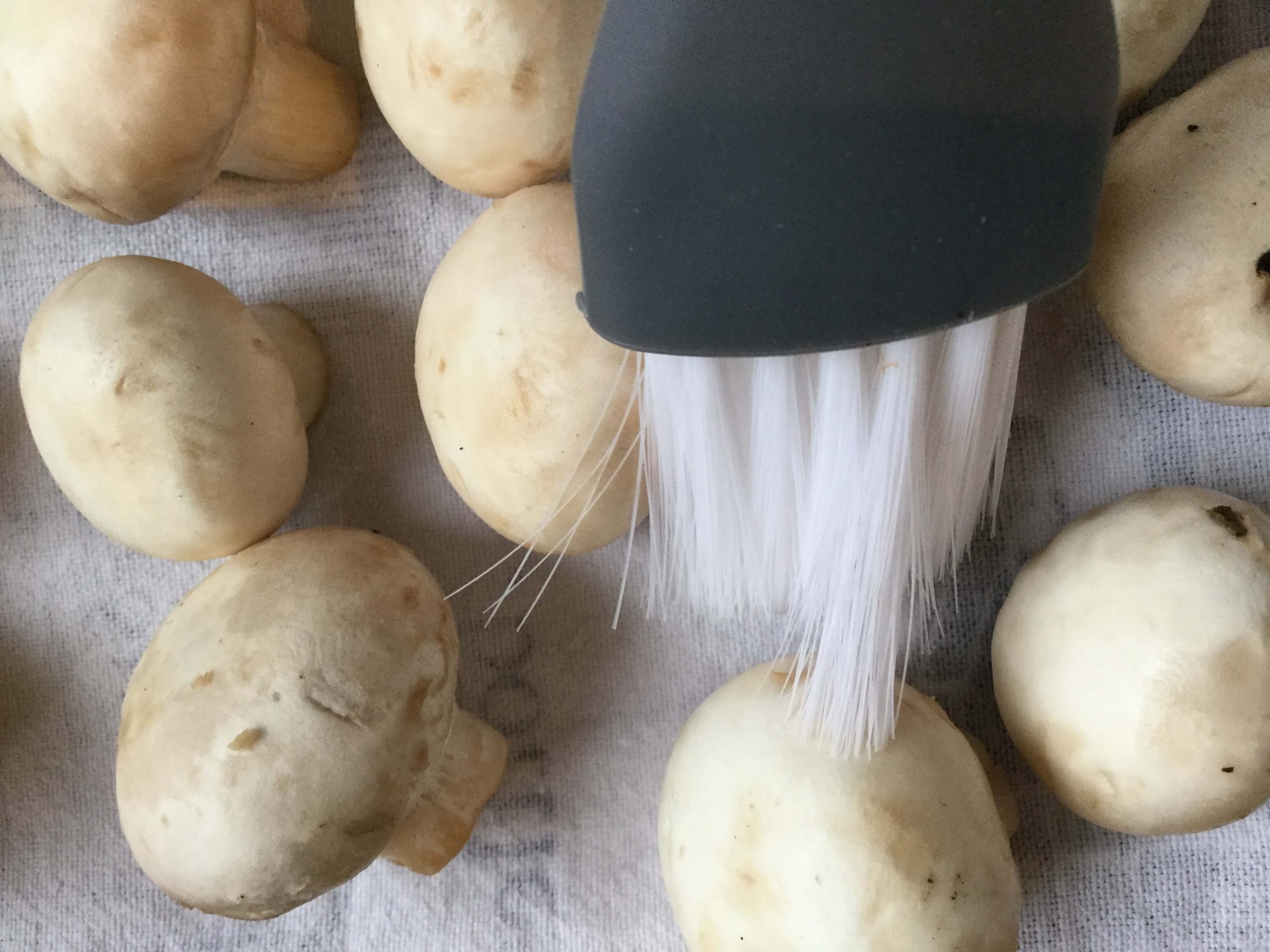 Step 4: Heat oil and slice mushrooms: Add two tablespoons of olive oil to the fry pan and turn it onto medium to heat up the oil. As the oil is heating, trim off any dried ends of stems and any woody parts of the mushrooms and then slice them evenly. 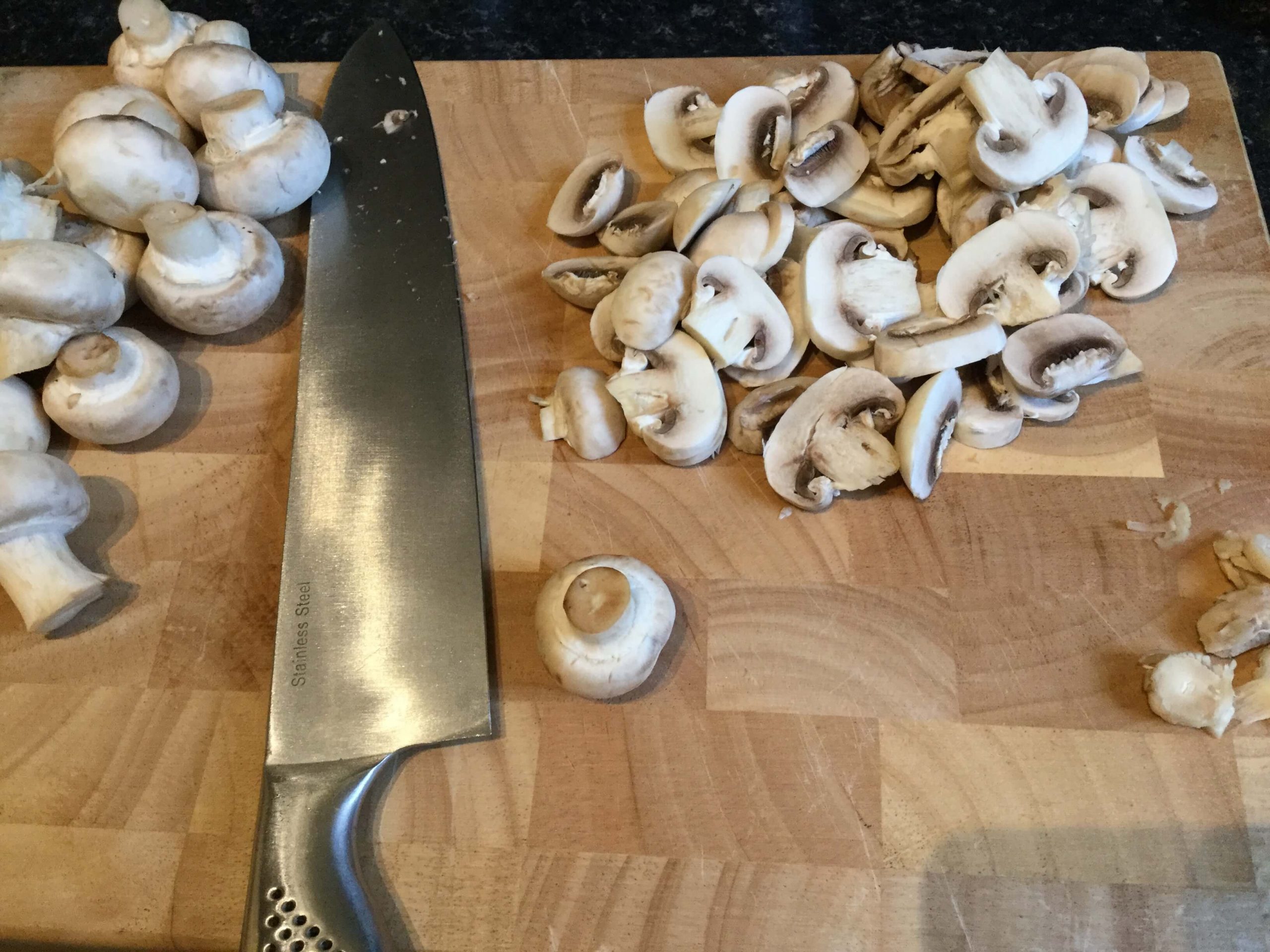 Step 5: Cook mushrooms: Place the mushrooms in the fry pan, add salt and pepper to taste and allow them to sauté to the color that you prefer them. Once done, turn off the burner. 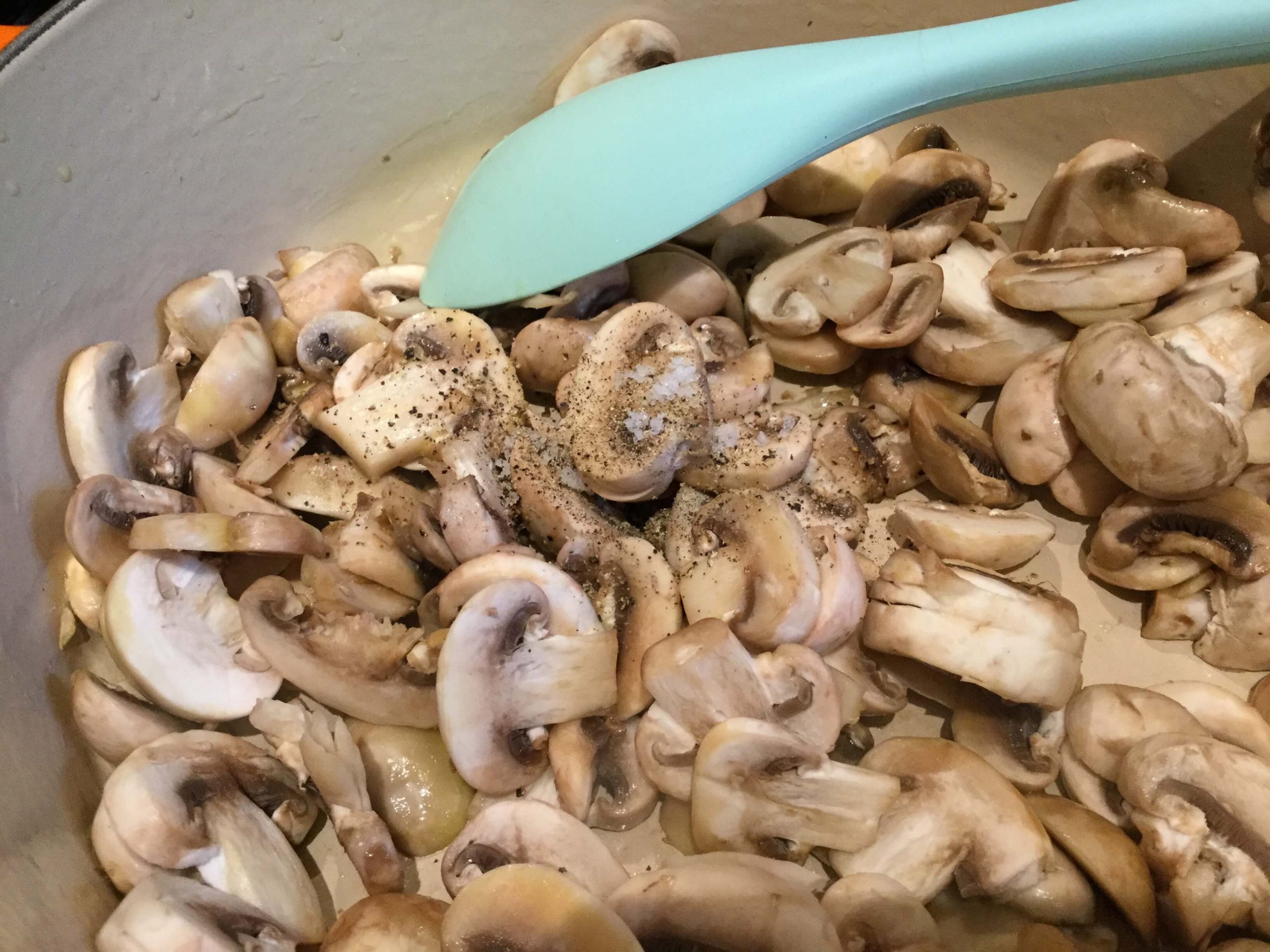 Step 6: Lay out the mushrooms: Spread the cooked mushrooms out to cool on your cookie sheet or baking pan. You may prefer to lay them on some paper towels at this point to absorb the excess moisture, but personally I prefer to save some of the stock with them, so I freeze them as is. 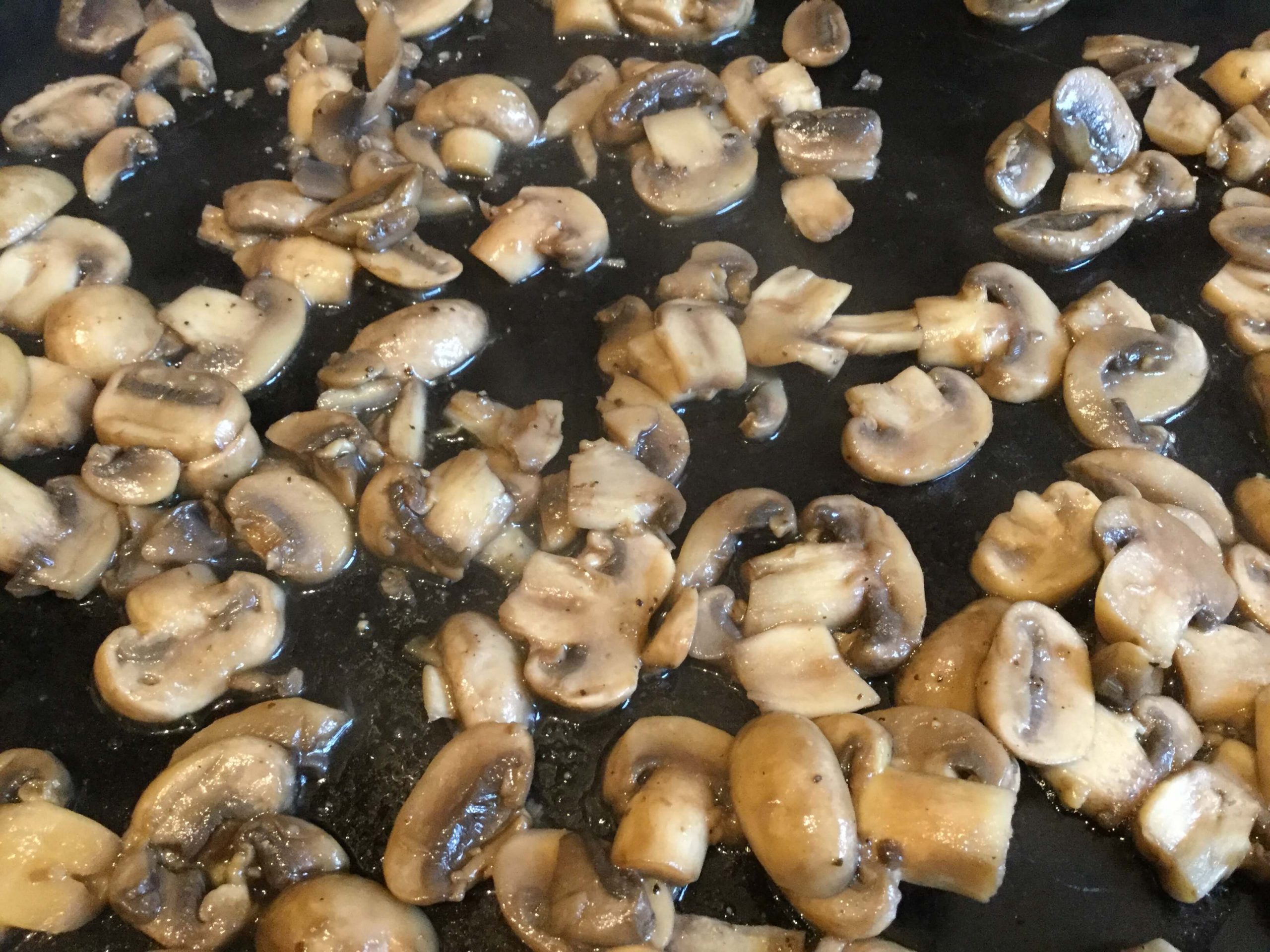 Step 7: Bag and freeze mushrooms: Once the mushrooms are cold, place them in a container or a Ziplock bag, remove the excess air, seal and place in the freezer. Do not forget to note the cooking date on the bag.

Pro Tip: If you freeze them as I do - with the excess stock from the pan - then give the bag a shake once an hour or so as the mushrooms are freezing as this will help stop them sticking together as they freeze. 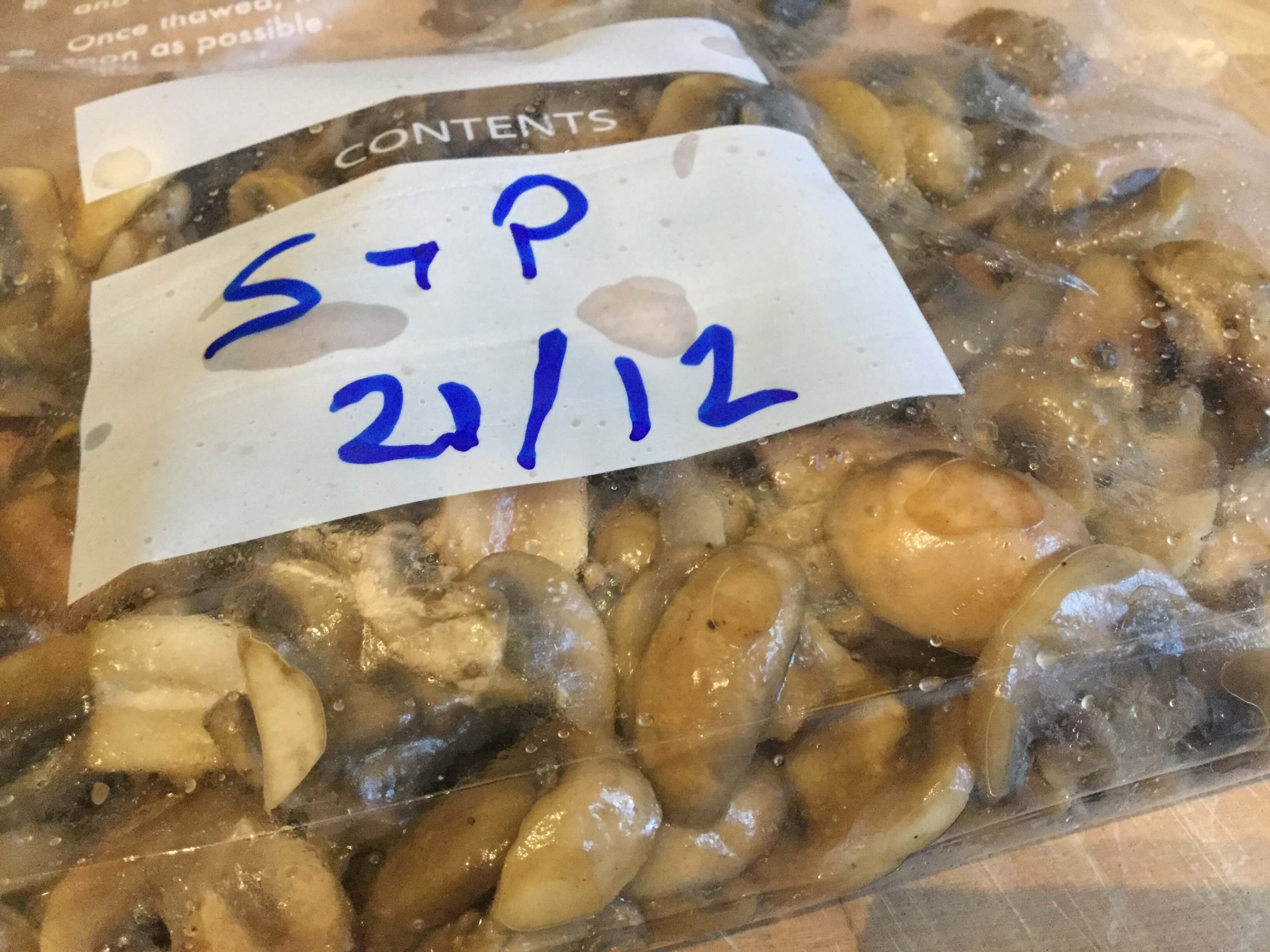 Once frozen, you can just take as many or as few mushrooms as you like from the bag and throw them into pasta dishes, stews or risottos five to ten minutes before the end of the cooking time.

If you add frozen mushrooms to eggs, do so at the start of the cooking to make sure they are heated through properly or if you want to put a few in your sandwich or wrap, just lay them out between two paper towels and microwave them on medium high for between 15 and 30 seconds. 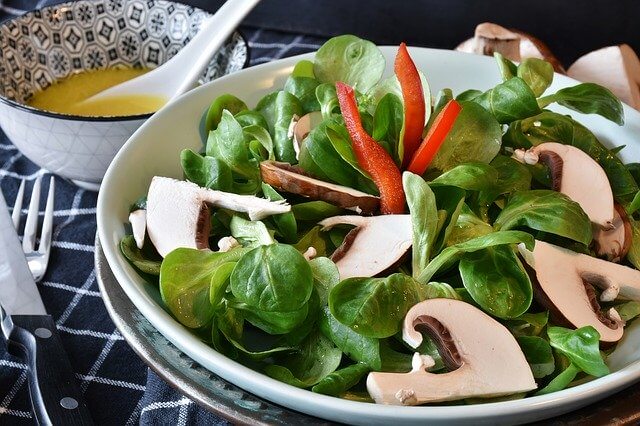 I hope that you have found these tutorials instructive and do feel free to share it with your friends and add any of your comments or suggestions below. 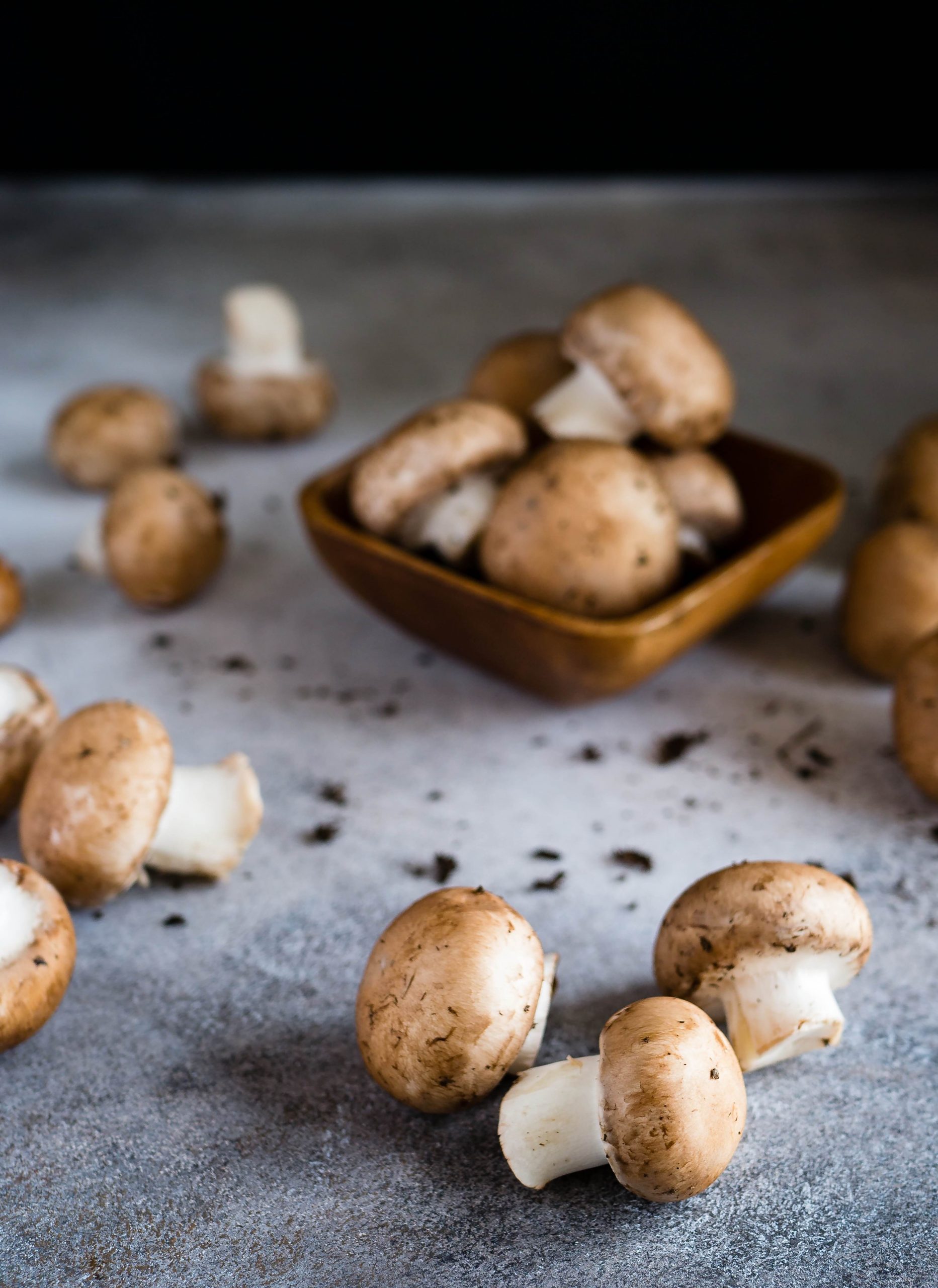