If you are organized in the kitchen and always remember to take your cream cheese out of the refrigerator well before you need to make your frosting, then you are much better organized than I am! As I tend to cook spur of the moment instead of planning well ahead, I usually need to soften my cream cheese very quickly.

My preferred method is in the microwave because it is fast, consistent and creates minimal mess. Even when softening at room temperature for an hour or so, this can still leave cream cheese only semi-softened.

If we do not soften cream cheese properly it will stay lumpy when added to the dessert or frosting. In this article, I provide a short tutorial on how to soften cream cheese in 30 seconds or so - making it perfect for that last minute cupcake frosting or desserts.

But before we get on to that, let’s take an in-depth look at cream cheese to see just what makes it so perfect for whipping up into frostings, desserts, dips and so much more.

There was considerable demand for European cheeses in the US in the late 19th century but it was expensive to buy due to the cost of shipping, and unfortunately the lack of refrigeration also meant that cheese would often arrive spoiled. There were some types of cream cheese around, some early recipes dated back to the 1700s and there were farms in Philadelphia which had a reputation for making it.

In 1872, a New York State farmer called William Alfred Lawrence bought a Neufchatel cheese factory and developed a smooth and rich block of cheese by adding salt and cream to a block of his own farm cheese. Similar to the French Neufchatel; he named his new cheese ‘cream cheese’.

By 1880, bulk manufacture and distribution of this cream cheese had been commissioned and Lawrence branded his cheese ‘Philadelphia Cream Cheese’ for the city’s association with high quality dairy produce. Going on sale in 1885, cream cheese soon became popular. 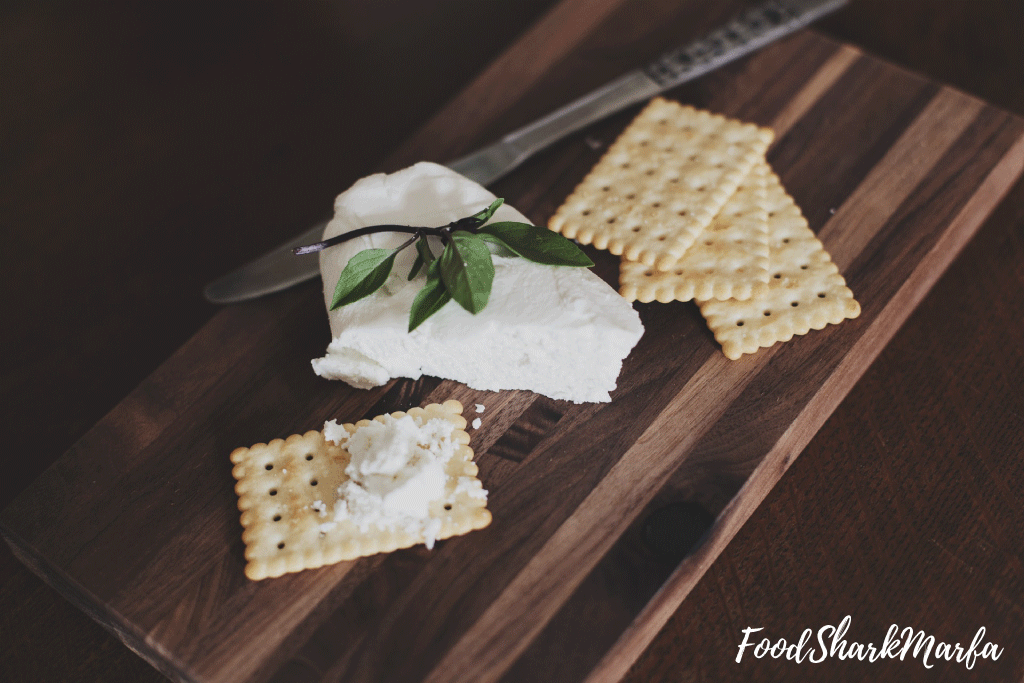 In 1903, the Phoenix Cheese Co. of New York bought the business and in turn, the brand was bought by Kraft Foods in 1928. Even today, Kraft (as Kraft Heinz Co.) continue to produce the most recognized brand of cream cheese in the US. It was not until 1912 that cream cheese became pasteurized, when James L. Kraft invented pasteurized cheese.

Back in the year 2000 cream and Neufchatel cheese production in the US exceeded 731.4 million lbs. That is a serious amount of frosting and cheesecake!

Like Neufchatel cheese, cream cheese has to be made from cow’s milk. Lactic acid is added to cream or a milk/cream combination. This lactic acid causes the pH of the cream to become more acidic which makes it coagulate – or separate into curds and whey. The whey is then drained off and the curds heated alongside stabilizers to form cream cheese.

These stabilizers, such as guar gum, make a firmer cheese while the more traditional cream cheese has a crumbly rather than spreadable texture. Because cream cheese is not aged it has no rinds and a consistent texture throughout. Cream cheese is also un-ripened which means it is ready to eat straight after processing.

This is also why cream cheese has a short shelf-life of no more than 10 days once opened and should always be refrigerated, even when unopened. Depending on the type of cream cheese its shelf life may vary but a regular cream cheese tends to keep longer than reduced fat or flavored cream cheese. Once you open a block, you should put it into a zip bag or airtight container for storage, rather than just wrapping the foil back over.

Cream cheese that is soft-spread or whipped usually contains whipped air to allow you to spread it straight onto your bagel from the refrigerator. Standard foil-wrapped blocks of cream cheese need bringing up to room temperature before they become spreadable.

Cream cheese does have some nutritional benefits. It is a source of calcium, phosphorous, magnesium, potassium, sodium and trace amounts of selenium. It also contains small amounts of vitamins A and K, folate and choline.

Cream cheese is versatile in a range of savory dishes such as pastry, dips and you can even use it in stovetop mac and cheese. 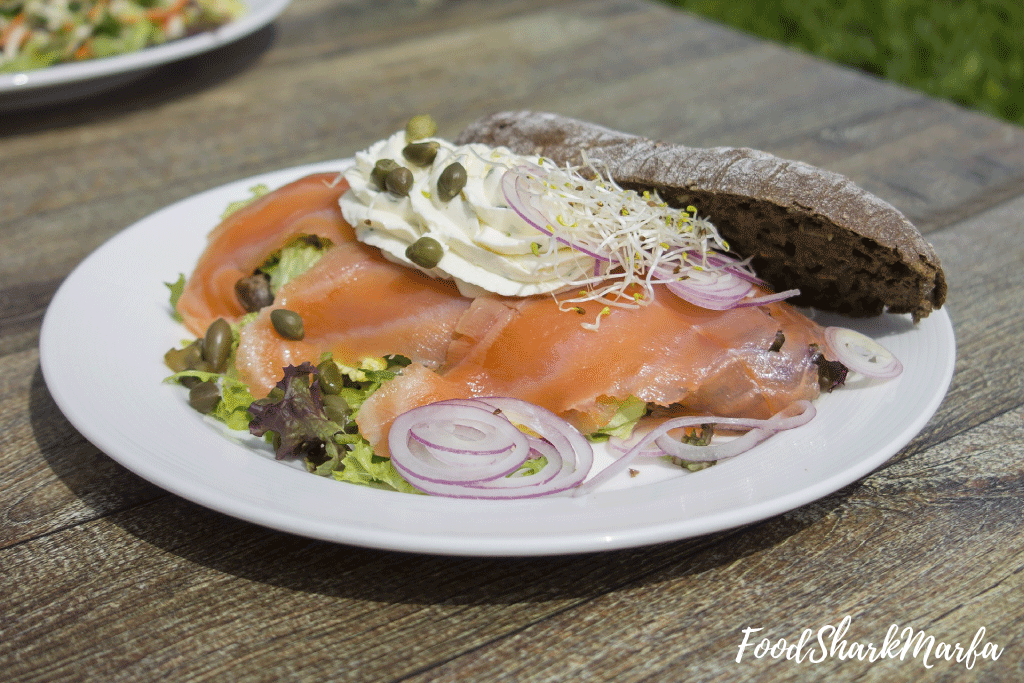 Its sweet and mild taste with a slight tang also makes it ideal for sweeter options such as frostings or brownies, and of course, the cheesecake. Cheesecake was actually around in the times of the Ancient Greeks – it was served to athletes taking part in the 776 BC Olympic Games! Cheesecake was also used as wedding cake in Greece and there have been cheese molds found which date back to around 2000 BC. These ancient cheesecakes were made from cheese, honey, wheat and flour which was formed into cakes, baked and eaten cold.

In the 18th century, Europeans were beginning to use eggs as a rising agent instead of yeast, and removal of the yeast flavor meant that the cheesecake sweetened and became more of a dessert. As Europeans migrated to the US, the cheesecake became a staple treat. 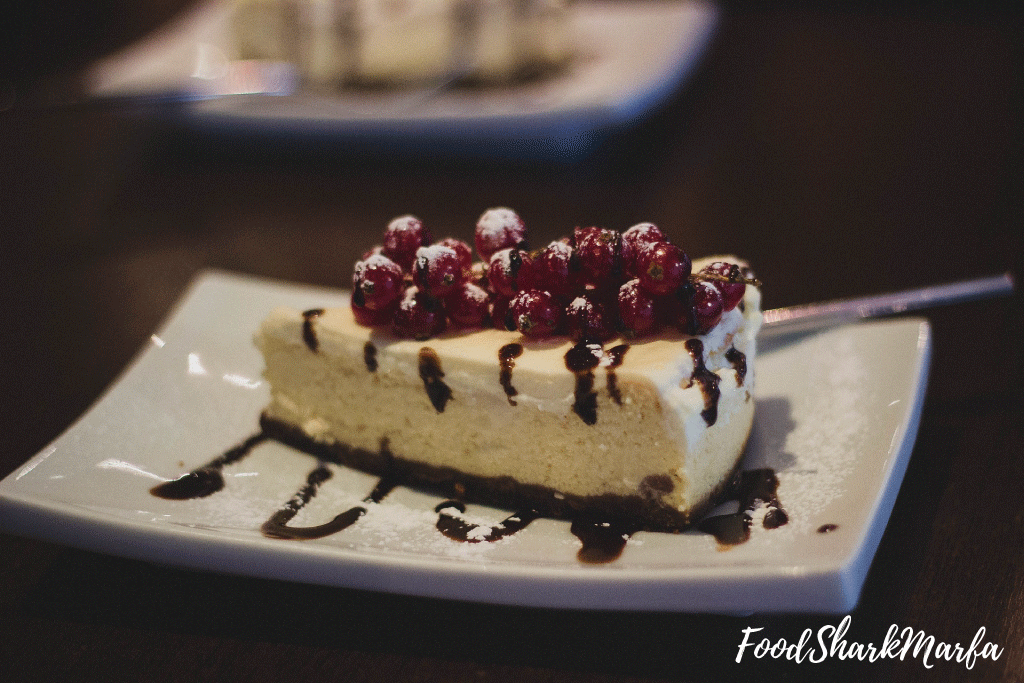 I’m guessing that at this point, you may just be thinking about a slice of homemade cheesecake. No? Really? Well, anyway, let’s move onto the main focus of the article – the tutorial on the easiest way to soften cream cheese.

If you prefer to soften at room temperature, then cut it into smaller blocks when you remove it from the fridge, as this will help it to soften faster. Room temperature softening is still the traditional way to soften cream cheese, but as said at the start of this post, it does rely on you remembering to take it out beforehand. The cream cheese may still be a little firm after sitting out, so you may need to beat it in your stand mixer for around a minute or whip some cream or lemon juice into it. Cream cheese can also be more prone to bacterial contamination if left out on the countertop for too long.

Pro tip: Never leave softened cream cheese at room temperature for any longer than two hours. If it has sat out for longer, then you should consider throwing it out as it may no longer be safe to eat.

You can also use the plastic wrap/hot water method. This is when you cover the cream cheese completely with plastic wrap and add it to a bowl of hot tap water for five to ten minutes. I am not a fan of this method as I think it over softens easily, and however well I think I have wrapped it, I always seem to end up with cream cheese liquid leaking into the water.

Another way is to just place the block on the countertop and either press on it repeatedly with the palm of your hand or use a pastry roller. This can take time and a bit of effort doing it this way, although it will not warm the cheese as much if you will need to keep it cold for your recipe.

Take off all of the cream cheese wrapping and place it in the center of your microwave-safe plate. 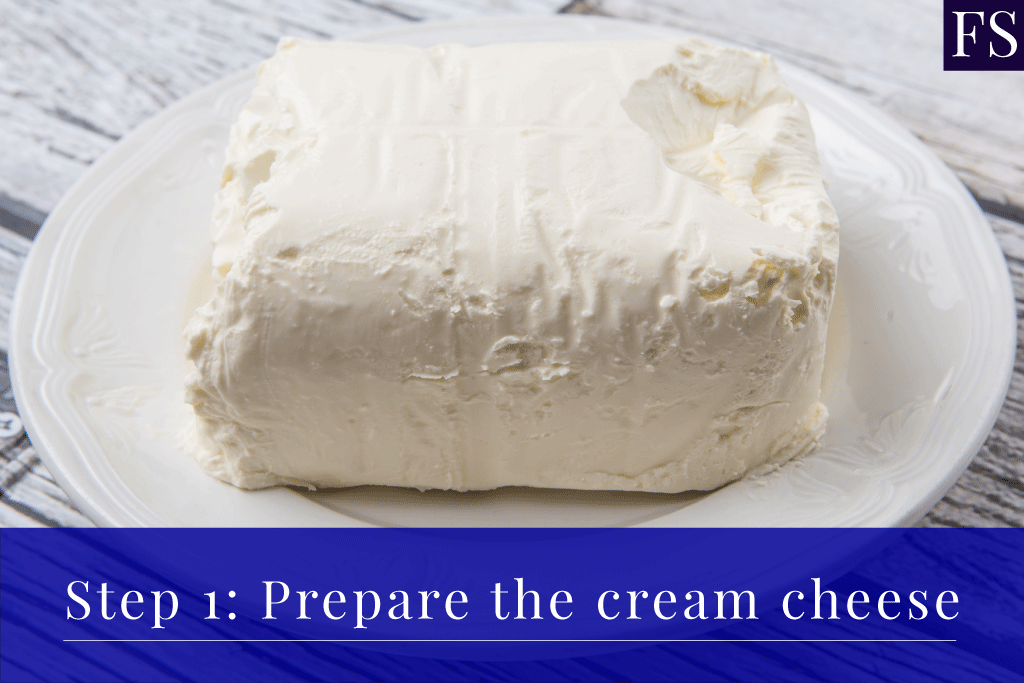 You may decide to cut the cheese into smaller pieces for it to soften faster. If you do, then you will need to watch it carefully as it could over-soften in the microwave.

Step 2: Warm up the cream cheese

Place the plate onto the microwave and set it on ‘high’. Set the timer for 15 seconds and press start. 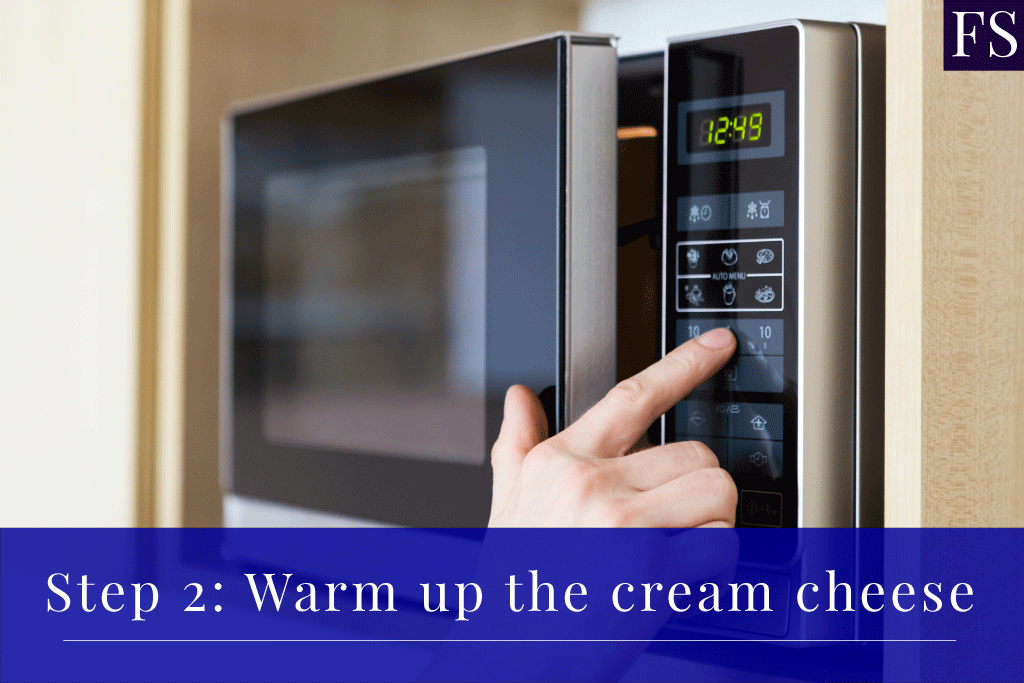 ​You can use your spoon to check it is fully softened in the middle. When you press the back of your spoon into the cream cheese, it should offer no resistance. If it has given way easily you should find that this soft enough for your recipe.

If it is not soft enough, then return to the microwave and turn on for an extra 5 seconds if your microwave is able to cook for this short amount of time. If not, then set it for 10 seconds, but do keep an eye on it to make sure it does not soften too much.

Pro tip: If it has got too soft, pop it in the refrigerator for a couple of minutes. Avoid leaving it in there for much longer as you do not want to warm your refrigerator up too much or allow the cream cheese to re-harden.

Mix the cheese with your spoon and make sure you mix in any liquid or whey on the plate as all of this will need to be used in the recipe. 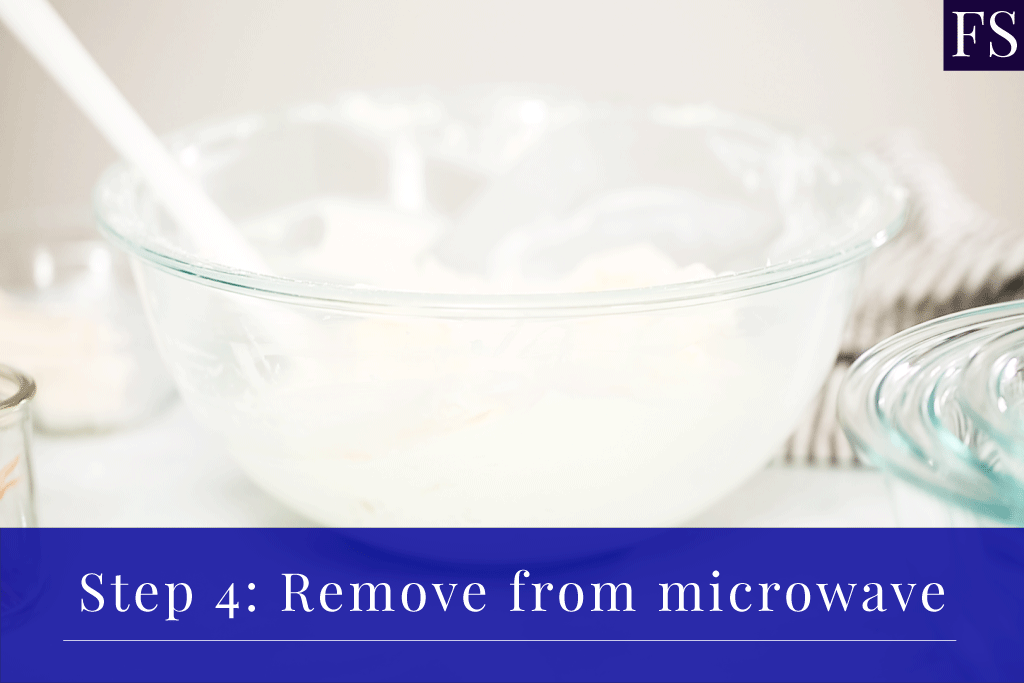 If you do have any softened cheese left over, you can return it to the fridge. If you do put it back in the fridge then use it up within a day or so and avoid re-heating. It is probably best to use it quickly on your lunchtime bagel! 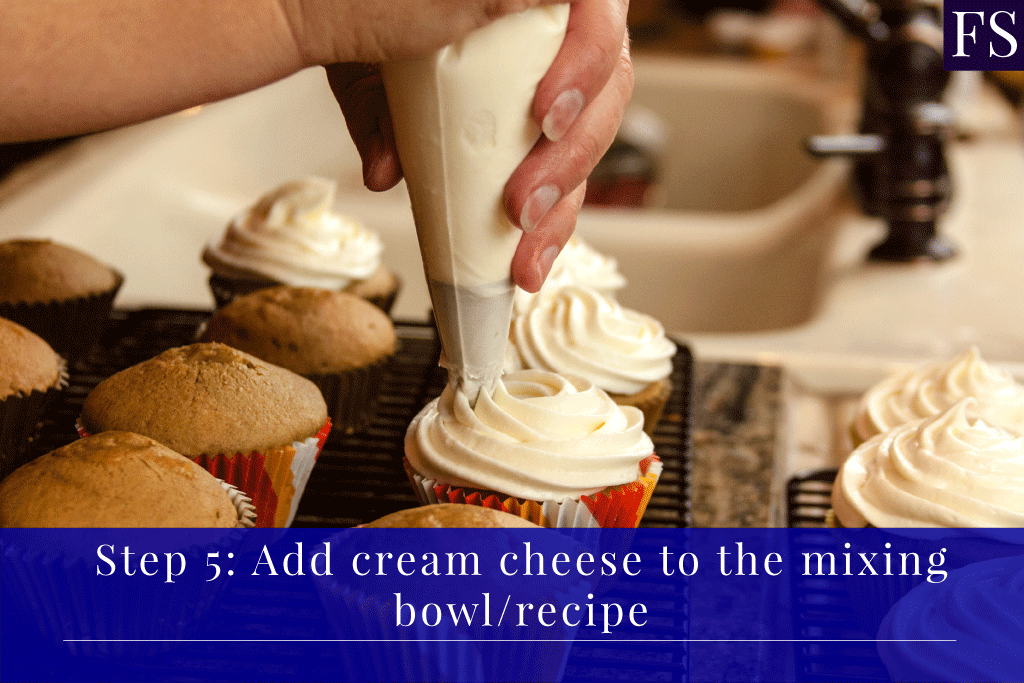 I always use the microwave to soften my cream cheese quickly, unless a recipe specifies that the cream cheese should stay cold. If this is the case, I will always soften it at room temperature for an hour or so.

Softening in the microwave allows me to bake or make a dessert without needing to plan ahead. This method of softening also means the cream cheese is less likely to become contaminated due to it being out on the countertop for a few hours. Using lemon or cream to soften it may also be helpful at times - depending on the recipe and personal taste of course.

If you have enjoyed this tutorial, do feel free to add your comments to the section below; it is always great to see how many of you agree with the tutorial and pro tips provided. Likewise, also feel free to share this article – the more people the better!