At least once or twice a year I get all my cookware down, give it an intensive clean and full re-seasoning. Because I only use stainless steel and cast iron in my kitchen, I have learnt the hard way that if I do not season pans properly and regularly I pay the price when having to scrape out burnt eggs or skillet jam.

Today’s cast iron pans usually come pre-seasoned, but over time and with washing the seasoning in your pan will lessen and your eggs (along with everything else) will begin to stick. Rust spots may also start to appear – another indicator that this is the time to re-season.

Seasoning a pan is not difficult although it does take time. To help you with this task, I have put together a step by step tutorial on how to re-season your cast iron.

Although cast iron can be fragile, it is incredibly durable. How many of us have an old skillet floating around which was passed to us from another member of the family? What is interesting is that these old skillets often season better than today’s new cast iron.

Cast iron pans were made by casting them in sand-based molds and then polishing the surface until it was smooth. When production of cast iron changed, manufacturers stopped polishing the cookware after casting, which means that modern cast iron has a rougher surface.

This rough surface can be harder to smooth over with the polymerized oil or seasoning, which means its non-stick capability may never be quite as good as your grandmother’s old skillet. 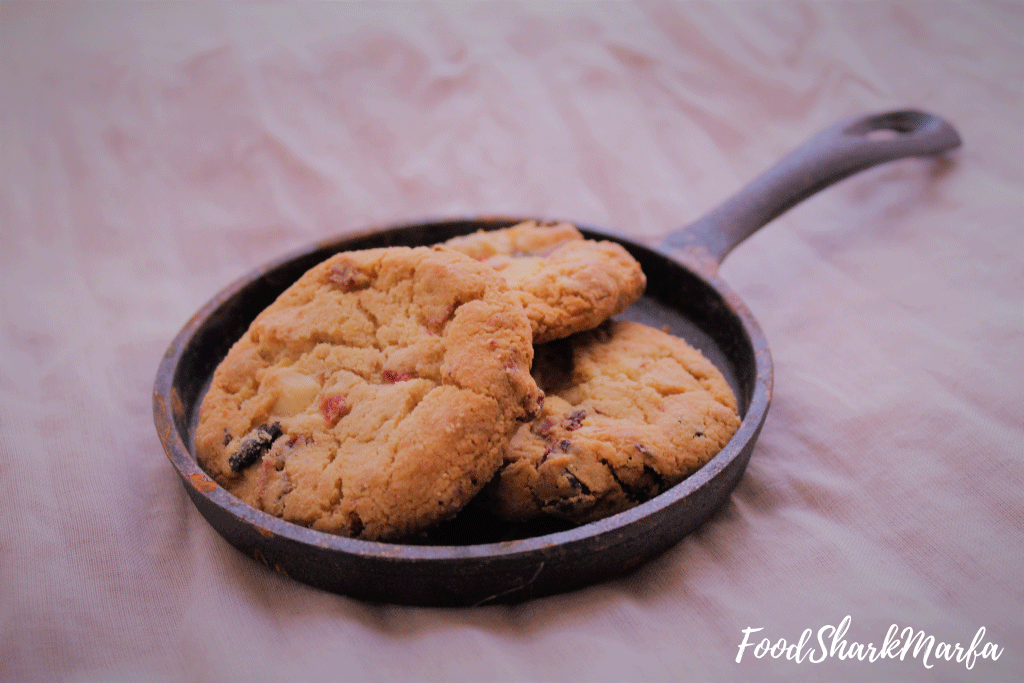 Cast iron is an iron alloy which contains between 2% and 4% carbon as well as manganese, silicon and some impurities such as sulfur. Cast iron is made in a blast furnace from the reduction of iron ore which is then cast into ingots called pigs. These pigs are re-melted with other alloy elements and scraps in a cupola furnace and cast into molds for pans and other items.

The Chinese were known to have manufactured cast iron as early as the 6th century BC and by the 14th century it was being made in Europe. The first American ironworks was established in 1619 on the James River in Virginia.

Cast iron was popular as it was cheaper to make than wrought iron and although more brittle than wrought, its load bearing capability made cast iron important as a structural metal before it was replaced by steel in the 20th century.

Although cast iron had been used for cooking for millennia, it was only in the late 19th century, the cast iron skillet was introduced. Cast iron continued to be popular well into the 20th century, although a number of manufacturers went out of business during the Great Depression. Cast iron was replaced as popular cookware when non-stick coated aluminum cookware rose to popularity during the 1960s and 1970s.

In the last decade or so, cast iron has once more become popular in specialist markets with several small and new manufacturers now producing niche cast iron cookware. 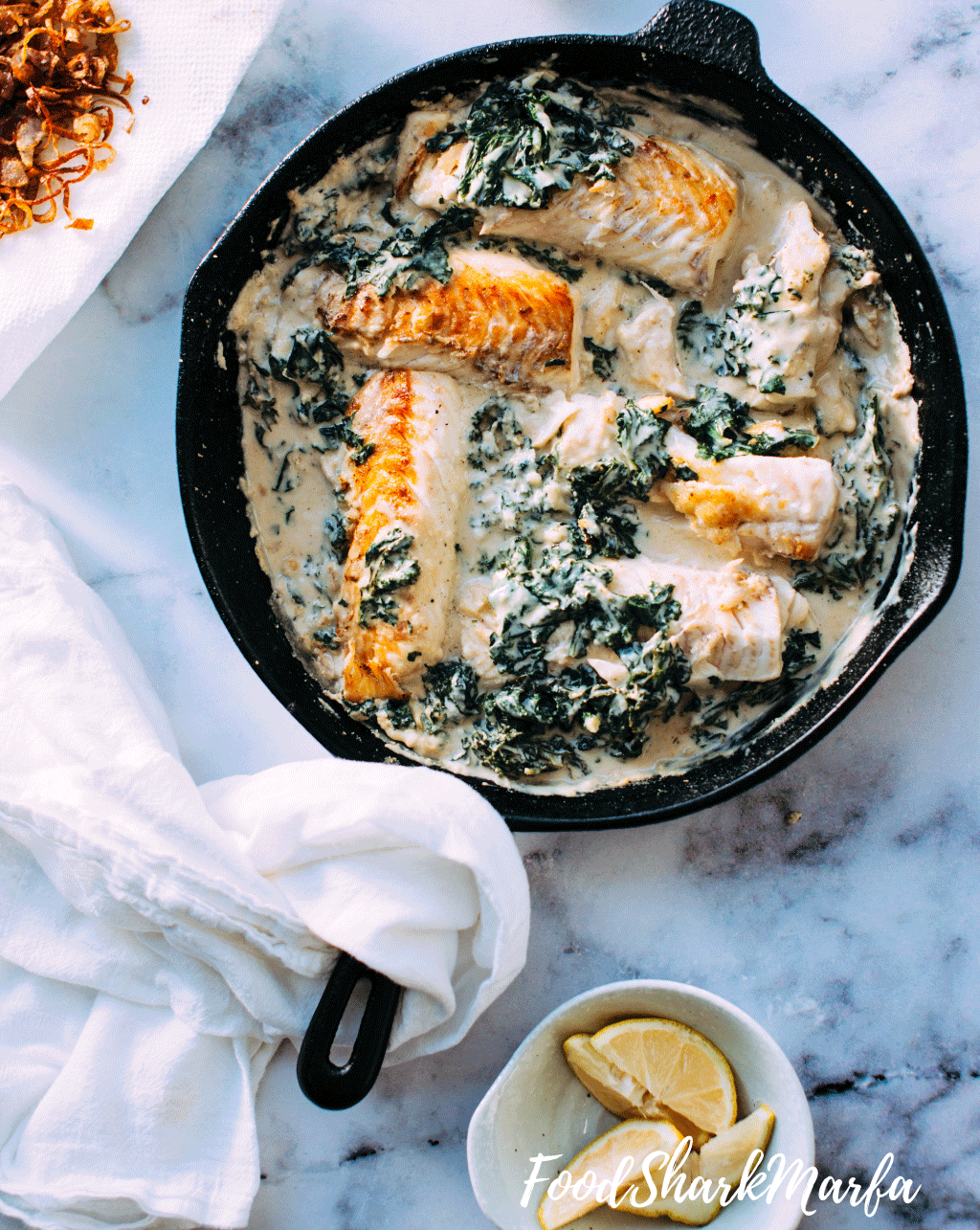 Unlike aluminum cookware, cast iron heats unevenly as it has lower thermal conductivity abilities. The real advantage of cast iron is its ability to get hot and then stay hot – essential for decent searing. To make the most of this ability, a cast iron pan should always be preheated, ideally for around 10 minutes, and rotated on the stovetop during heating to ensure it is hot throughout before you add your steak or eggs.

Cast iron also has higher emissivity than other cookware, which means it loses heat in the form of radiation from its surface. This allows it to cook all the food in the pan (indirectly) rather than just the surface of the food in contact with the pan.

Because of the rough surface of cast iron and its capacity to react, it means that even a few drops of water left in a pan after cleaning is enough for it to start rusting. If you live on the coast the salt-air can increase the risk of rusting, as can using your pan infrequently and storing it in a cupboard away from circulating air.
Insert Image

Where you can feel, as well as see this rusting, it is known as profile rusting and can usually be removed with steel wool or an S.O.S soap pad before re-seasoning. If you have been lucky enough to pick up a rusted old skillet at a yard sale, you will find it easier taking it to your local auto or body shop for sandblasting than trying to tackle it yourself with some steel wool.

When we season our pans, it means we coat them with a layer of hardened or polymerized oil - hard enough to fill over the rough spots and protect the surface of the cast iron while leaving it with the rich black patina that we know and love so well.

Many people prefer to season on the stovetop. I do still use this method for stainless steel, but over the years I have found that although seasoning in the oven does takes longer, it gives a more consistent coating to cast iron as the oven heat does not create hot or cold spots in the way that the stovetop can.

A good rinse with warm water should usually be enough. As you are going to season your pan, you can use detergent to help remove any food debris or particles of rust from the surface of the pan. Otherwise, avoid using detergent to clean a cast iron pan. 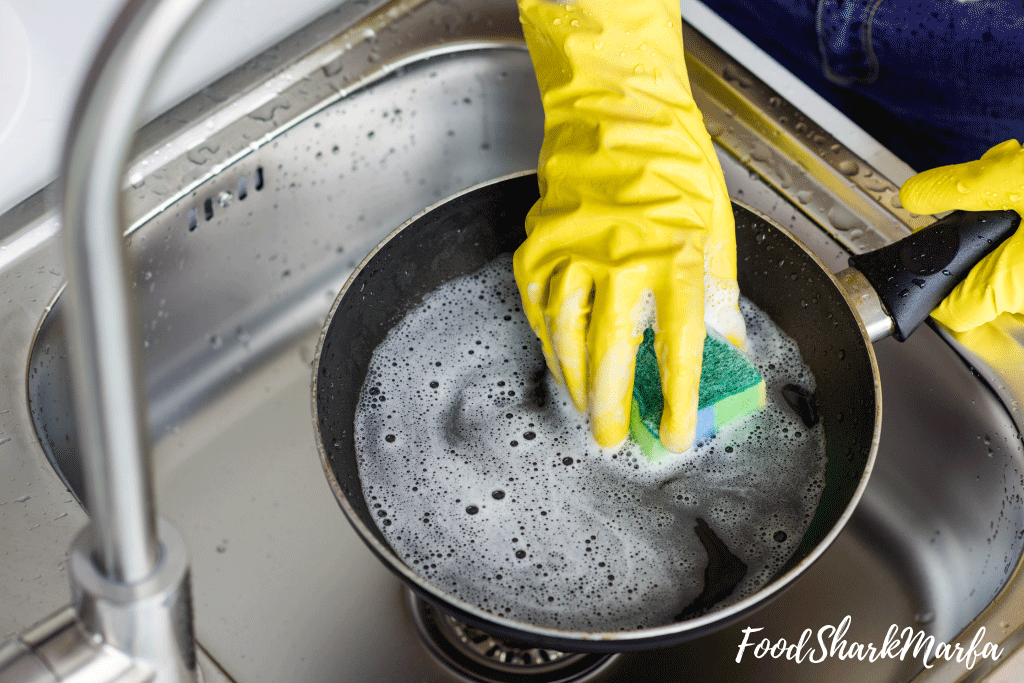 Using your steel wool, scrub off any surface rust on the inner or the outer of the pan. You can be as harsh as you need to be at this stage as you will be seasoning after this. Once the rust is removed from the pan and the surface is back to its raw iron, rinse it well. 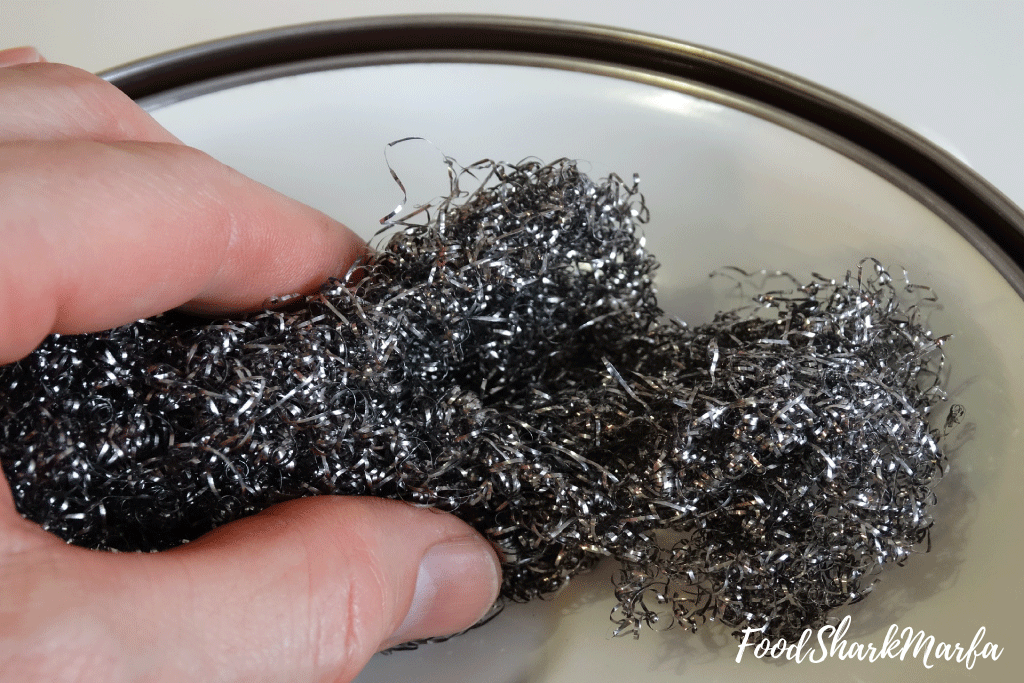 Pro tip: If you just have one or two spots of light rust, often known as flash rusting on a well-seasoned pan you can try just rubbing the rust spots away with a little oil on a paper towel.

This is an important step as any stray moisture left in the pan will stop it from seasoning properly. A good dry with a paper towel is usually enough, or you can put it over low heat on the stovetop for a couple of minutes to evaporate any remaining moisture.

Add a teaspoon of oil to the pan and rub or buff around all the inner surface with a piece of paper towel. When you have finished rubbing the oil in, the surface should look dull and dry – not greasy.

Thin layers bond to the iron much better than thick layers and any excess oil tends to leave hardened spots on the pan’s surface after seasoning. 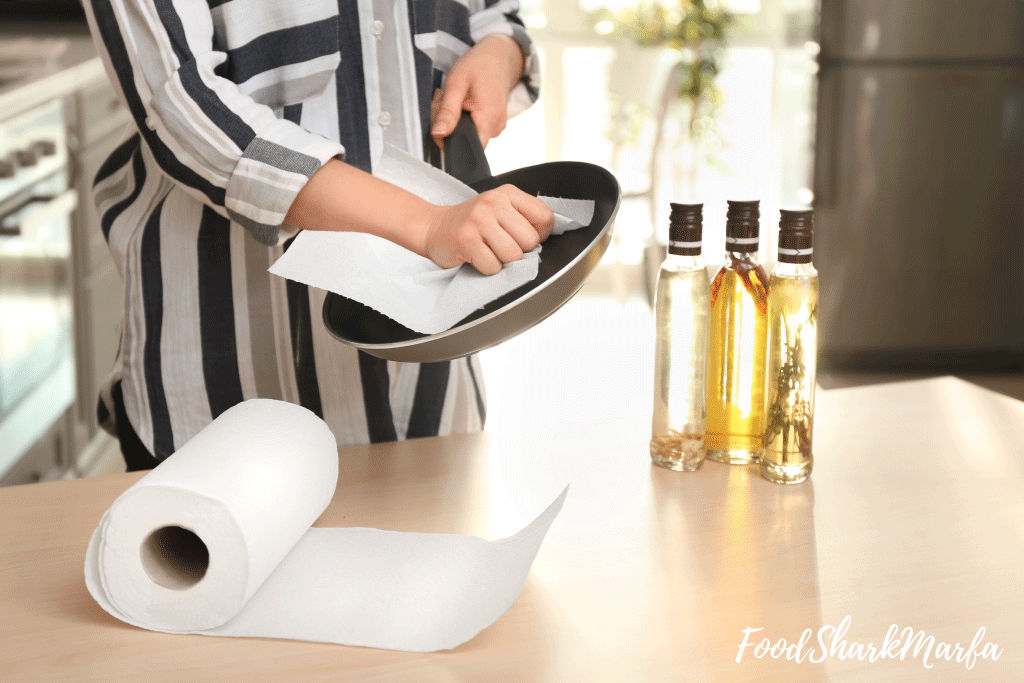 Once the inner pan is coated, do the same on the outside of the pan and its handle. Make sure all the pan has been completely coated with oil.

​Place the pan upside down on the middle shelf and leave in the oven for 30 minutes. Place a tray on the shelf below to catch any oil drips and make sure your windows and door are open as it the pan will begin to smoke. 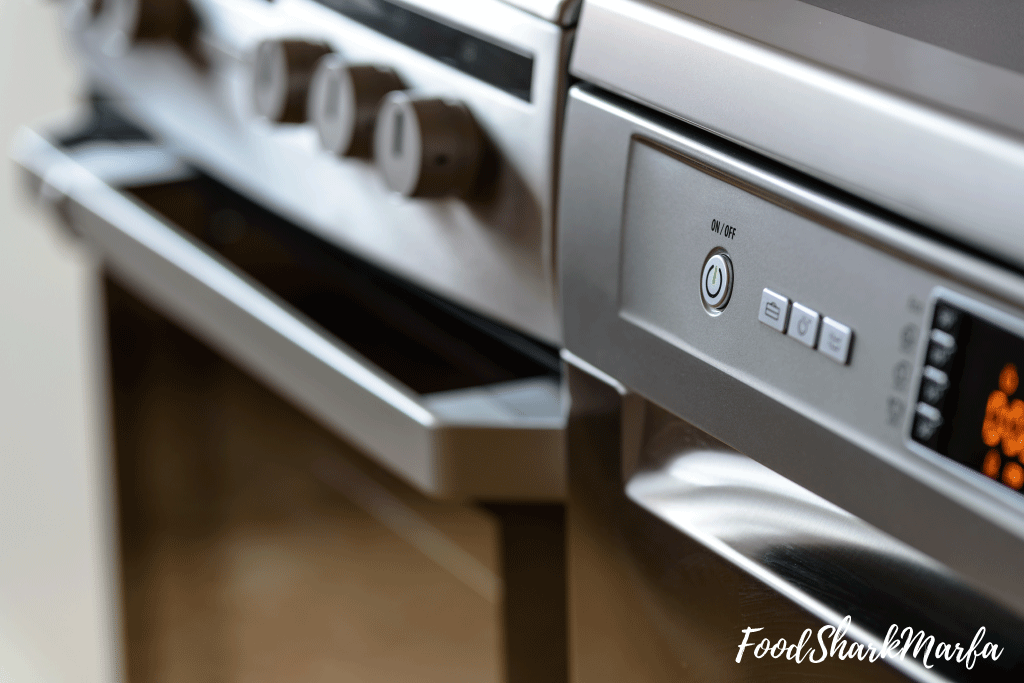 As the oil on the pan heats in the oven (or on the stovetop if you use that method) and gets to the correct temperature, it will begin to polymerize - bonding to the iron and creating a hard plastic-like coating resistant to sticking. This coating will also protect the iron from water and the air.

It is important that the oven is at 450°F, or at least 400°F, as the seasoning point of any oil is its smoke point – this is when it breaks down in to the carbon and short-chain polymers which are able to bond to the iron.

Canola, sesame, vegetable, grapeseed, sunflower, peanut, almond and soy oils all have a smoke point of between 400°F and 450°F. If the oil stays below its smoke point temperature then it cannot completely polymerize and if it stays above this temperature for too long, it will just burn or carbonize.

​Carefully remove the pan with the oven mitt and place on a pot stand. Handling the hot pan with extra care, add another teaspoon of oil to it and rub in as Step 4. 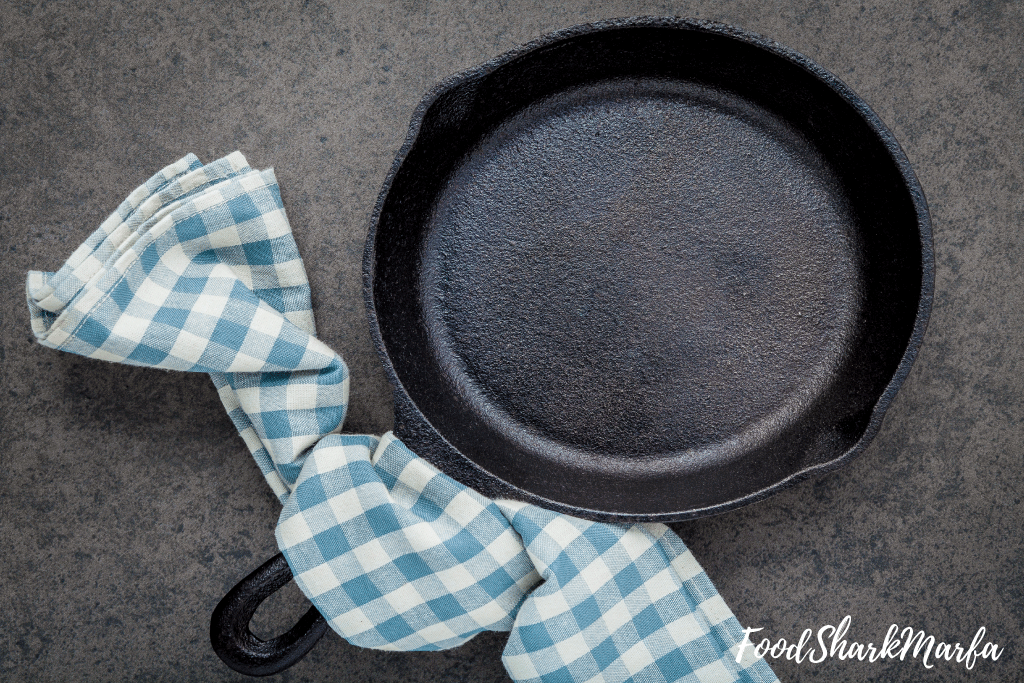 Until the pan has been heated in the oven three or four times.

Pro tip: Depending on how regular you use your pan and what you cook in it, one seasoning can be enough; but if you do have the time it is worth repeating the process.

It is now ready to use.

Over time, as you use your cast iron pan you continue to season it, so a full season is only needed occasionally.

Pro tip: Keep heat lower for the first few uses after seasoning as food may still stick. Fried chicken or cornbread is ideal to build up early-days seasoning. Although a seasoned pan will occasionally take tomatoes and other acidic foods, avoid them at first until the pan is completely non-stick.

Where possible, just wipe around the pan with a paper towel when you have finished cooking. If it is dirty, hold the hot pan under running warm water until it has cooled to the temperature of the water, then use a sponge to remove any food debris stuck on. If you are still struggling to get it clean, then a brush and some coarse salt should help.

Never leave a cast iron pan to soak as there is a high chance that water will reach the iron through a break in the seasoning and cause it to start rusting. Unfortunately, you may then need to scour with wire wool and undertake a complete re-season.

Once you have cleaned your pan and dried it thoroughly, you can add a little oil to a paper towel and wipe the pan - just leaving a very thin layer of oil on it.

If the seasoning on your pan does become sticky, it means a buildup of excess oil which is not polymerizing. Turn the pan upside down and pop it in the oven for 30 minutes at 450°F. You can repeat this process until the stickiness has disappeared or scour off the seasoning with wire wool and fully re-season (Steps 1 through 8).

There are different ways to season cast iron and even just by chatting with friends you will find they all do it in different ways. However, if you are new to seasoning, or have found that other methods have not worked as well as expected, I hope this step-by-step seasoning tutorial will help you season your skillet effectively.

Although it can be time consuming to do it properly, it is time well spent as a cast iron pan can truly make or break a meal. If you have enjoyed this tutorial, please do share it and it would be great if you could feed back any comments around good or bad experiences you have had when seasoning cast iron.
5 / 5 ( 12 votes )