Gruyère /gru-jə/, pronounced "gru-yair", is a cheese that originated in Switzerland with a smooth, melty texture. This cheese is produced from whole cow's milk that is aged for 6 months or more. The name gruyère is named after a town in Switzerland wherein it was first produced. This cheese is firm in texture and pale yellow in terms of color. It has a slightly nutty, rich, and creamy flavor, making it the perfect addition to many dishes that need that extra boost of flavor.

Gruyère can also be considered as a good table cheese—a label that is used for any variation of cheese that is fit to be eaten when sliced, such as for cheese platter or sandwiches. Another characteristic of gruyère that cheese-lovers would surely love is that this cheese is also a perfect melting cheese. In fact, this cheese is amazingly one of the only two kinds of cheese that is mainly used for making the popular fondue dish; the other one is Emmental cheese.

This cheese also has what you call “eyes” or small holes in the body, which is a very common feature for many cheeses that originate from Switzerland. These holes are formed due to the bacteria that releases gas bubbles during the production of the cheese. However, gruyère has smaller holes and a lesser number compared with other types of Swiss cheese. This cheese is also popularly used, along with the addition of Emmental at times, in the traditional grilled cheese sandwich of France named Croque Monsieur, which is a common dish served in most Parisian bistros.

Gruyère is a key ingredient for those of you who like French or Italian dishes such as souffles, sandwiches, pasta, and pizza. It is true that this cheese is very easy to find in a lot of stores, but the problem is that it's not so affordable for some.

Gruyère is usually priced at a range between 14 to 18 US Dollars per pound. Fortunately, some stores are willing to cut you a smaller portion for a lesser charge. Nevertheless, below is a list of all the best backups for gruyère should you ever require a worthy replacement. 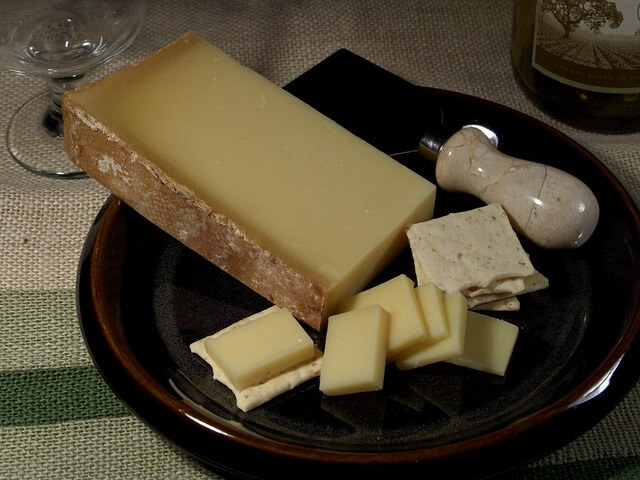 Beaufort cheese is a semi-hard cheese that first originated in France. This cheese is produced from unpasteurized cow's milk. It is a mountain cheese, and some consider it as a great substitute for gruyère because, like gruyère, it melts fairly well. As such, it can make a great gruyère replacement in dishes like fondues, sandwiches, pasta, pizza, tarts, bruschetta, and carpaccios. Another great thing about this cheese is that it is brine-washed to enhance its already delicious flavor.

Beaufort cheese comes from the milk of the Tarine breed of cattle, and it is one of the most loved cheeses around the world. It is pale-yellow on the inside, making it quite similar to comté in appearance. 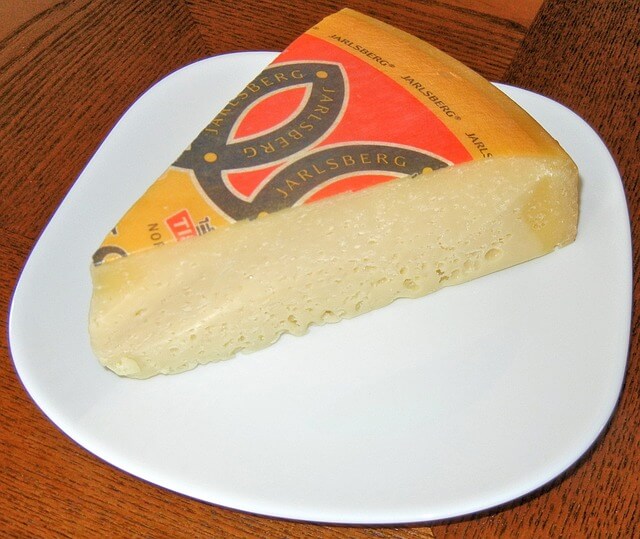 Jarlsberg Cheese, as you can tell from the name itself, originated from Jarlsberg, Norway. This semi-soft cheese was first produced by a Norwegian agriculturist named Anders Larsen Bakke. Jarlsberg cheese is usually used in sandwiches, but also works well with snacks or even all by itself.

Just like the Emmentaler cheese, it also features big holes around its body. In terms of flavor and taste, it has a sweet yet nutty flavor that is mild on the tongue. Other than being used for cooking and baking, it can also be used as a partner to white wines and beers. Jarlsberg can also be considered as a great substitute for Gruyère because of its fairly cheap price-tag, costing around 12 to 14 US Dollars per pound

Jarlsberg cheese is often mistaken for Swiss cheese because of its typically Swiss features, but it is actually stronger and sweeter than Emmentaler cheese. It has a rich and buttery yellow interior which contains a yellow-wax rind.

Many people also like this cheese because of its versatility, which is why it is considered an all-purpose cheese. Jarlsberg is a great melting cheese that can be used for fondues, quiches, and some hot dishes. This cheese can be bought in wheels, wedges, wheels, minis, and custom weights. The rind and rindless version of this cheese are both fairly widely available in stores. 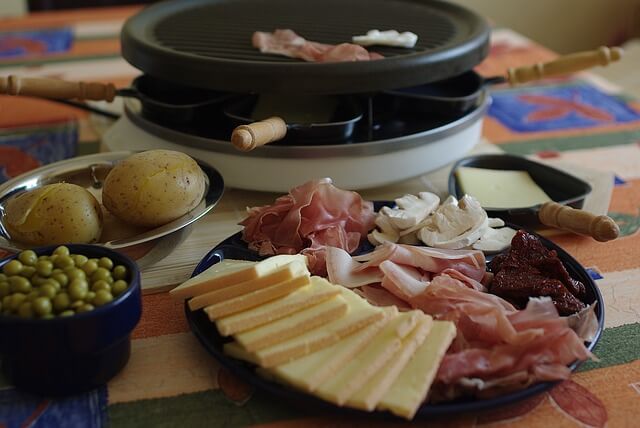 Now for another cheese that is well-known for its melting abilities; Raclette Cheese is a cheese that was first founded in Switzerland, specifically in the region of Valais. The name of this semi-hard cheese originated from a classic Swiss dish of the same name.

The etymology of the name Raclette comes from the French word "Racler," which is translated as "to scrape." Raclette cheese can be aged for 3 to 6 months. Although Switzerland produces about 80 percent of this cheese, the French version of Raclette is somewhat softer, smoother, and creamier in texture.

Raclette is usually served alongside warm beverages. Eating this cheese with the addition of cold drinks or water might cause this cheese to harden inside your stomach, which can lead to indigestion. Originally, Raclette cheese was melted using open fire, but the modern technique is to use a non-stick electric grill.

This cheese can also be a great fit in place of Gruyère because of its great melting properties. This cheese is mostly used for sandwiches, lasagna, fondue, pasta, pizza, and more. Raclette cheese's price typically ranges from 18 to 20 US Dollars per one pound.

Today, Raclette cheese continues to grow in popularity; it was first popular in France and Germany, but this delicious cheese can now be found in the streets of New York City and restaurants in Australia.

Just like Jarlsberg cheese, Emmental is another cheese that was named after the place where it originated. Emmental cheese was first produced in Emmental valley in the canton of Bern located in the west-central of Switzerland. This semi-hard cheese is typically produced from the milk of cows, and it can be used in several types of dishes such as fondues, pastries, tarts, ravioli, sandwiches, bruschetta, and many more.

It is also a great melting cheese, which is why it can be used for making fondues. It features large holes throughout its body as many other Swiss cheeses do.

There are actually several other versions on how to spell the name of this cheese—like Emmenthaler, Emmental, or Emmenthal. Despite originating in Switzerland, Emmental is also commonly produced in other countries such as France and Germany.

Those of you from the US may be unfamiliar with Emmental's traditional name, as it is more commonly referred to by Americans as Swiss cheese. The aging time of this cheese is usually around 2 to 18 months. Emmental is also a great substitute for Gruyère price-wise, with the same price range of around 14 to 18 US Dollars per pound.

Emmental is a firm type of cheese with a slight nutty yet mildly sharp and buttery taste. In terms of color, it is pale yellow along with a natural rind. Because of its remarkable melting abilities, this cheese is also used in grilled sandwiches and sauces.

Along with Gruyère, Emmental is the only main cheese used for creating the classic and famous Fondue recipe. This Swiss cheese is also delicious in macaroni and cheese recipes and pairs very nicely with wines like Merlot, champagne, Beaujolais, and Reisling.

When it comes to beer, the fruity flavor of Emmental cheese pairs perfectly with stout, Belgian beer, or light lager. It is also a good pair for peaches, apples, pears and grapes. You could store this cheese for around six days, or place parchment between the slices before wrapping the cheese using a plastic Wrap. 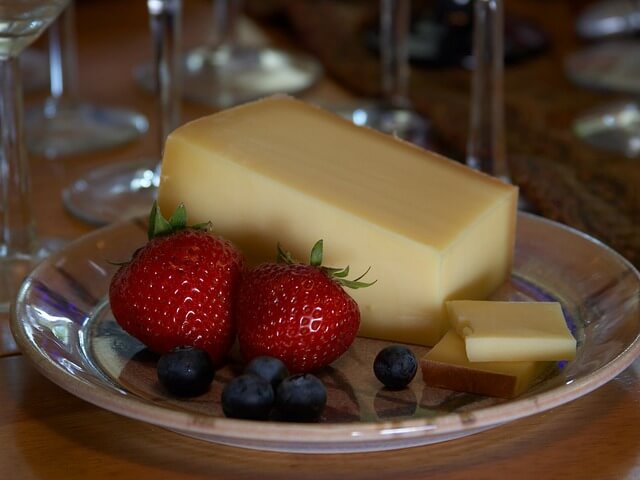 You might be starting to get the feeling that Switzerland has a thing for naming their cheese based after their origins; well, you’re not wrong! Appenzeller cheese is a hard-type swiss cheese that originated in Appenzell, Switzerland. Appenzeller cheese is coated using a brine, and it could contain either cider or wine. The flavor of this cheese is dependent on how long it was aged.

Another version of this cheese is available called Appenzeller Bio. It is the same cheese, but made from organic milk. Appenzeller is also known as possibly the spiciest cheese in the country of Switzerland.

It was originally made in the Swiss canton of the Appenzell, but it is now also being produced in the canton of St. Gallen. It is a delicious and versatile alternative for Gruyère cheese, but it’s not cheaper in terms of price. With the variation in ages also counting as a factor, a pound serving of this cheese can cost you at around 24 to 32 US Dollars in most stores.

Other than the herbal brine that rubbed into the cheese before aging, Appenzeller also boasts a few characteristics to set it apart from other cheeses. This straw-colored cheese leaves a spicy, tangy, and fruity flavor on the tongue with a mild aroma. In terms of texture, it is a firm, smooth and open cheese.

This washed-rind cheese is classified as hard, smear-ripened, and artisan. The last factor on why this cheese is so special is because of the milk used to produce it. It is traditionally made from the milk of the legendary Brown Switzerland cows, which consume the freshest herbs, grass, and flowers in the Alpine region of Switzerland to produce high-quality milk.

Everybody loves cheese, but it’s important to remember to keep a balanced diet. Your health should always be your number one priority. As cheese is well known for its high fat and sodium content, it's important to remember to enjoy it in moderation. Remember that too much fat and sodium can cause many serious diseases such as strokes, cancers, osteoporosis, and heart diseases.

You can easily regulate your sodium and fat intake by checking the nutritional value of the foods you eat and managing your diet. It's always a pleasure to try all these mouth-watering flavors of cheese, just keep yourself healthy so you can keep on enjoying your favorite cheeses for years to come!