As a favorite comfort food, a popular question often asked is ‘can you freeze mac and cheese?’. The answer is yes, mac and cheese will freeze. Even if it is a make-ahead or a quick boxed macaroni and cheese, it can be frozen. Most mac and cheese, whether cooked on the stovetop or in the oven will keep at its best for six months.

In this post, I take a look at the two main ways to freeze mac and cheese –uncooked or make ahead and already cooked – and, answer a few other questions that you may have around successfully freezing mac and cheese.

Tips When Making Mac and Cheese to Freeze

Generally, the creamier a mac and cheese dish is the better it will freeze as the extra liquid helps keep moisture in the pasta when it is reheated. Changing the milk for a milk powder can help it freeze and bake better and if you still prefer to use milk, use a regular milk rather than skim milk – as the extra fat is useful when freezing. Adding some cream cheese will help thicken the sauce and adding cream cheese also means you can cut out some of the flour which also helps reduce texture changes.

The macaroni should be al dente rather than soft, as slightly firmer past does not absorb as much sauce. A layer of cheese on the top will also help prevent the macaroni from going hard when it bakes as unfortunately, freezing and then reheating will only make crunchy macaroni worse!

If you are baking your mac ‘n’ cheese, try cooking it at a slightly lower temperature for longer as this can help it freeze better.

Finally, the taste of mac and cheese can be a little bland after freezing, so adding some extra seasoning during cooking such as nutmeg or paprika can help bring the flavor out once it is reheated.

How to Freeze Uncooked (Make-Ahead) Mac and Cheese

One advantage to freezing an uncooked mac and cheese is that it may not have as much alteration in texture that can occur when dairy products are frozen.

To freeze macaroni and cheese uncooked, prepare it as usual until you get the point when you would otherwise be putting it in the oven or on the stovetop. At this point, leave smaller portions to cool to room temperature on the countertop, or for larger portions, sit the dish with the uncooked mac and cheese into an ice bath as this will cool it faster and safely. Once cool, it can then be wrapped.

If you will be cooking the mac and cheese on the stove top after thawing, then place it into a large Ziplock bag or a plastic container. If you use a container, place a layer of shrink wrap or aluminum foil over the top of the food before you add the lid as this helps minimize freezer burn. Don’t forget to write ‘mac and cheese’ and the date on the bag or container!

If you want to bake it after thawing, then you can prepare it in a spare oven dish, or even in individual dishes and once cool, wrap well with shrink wrap and then a layer or aluminum foil. 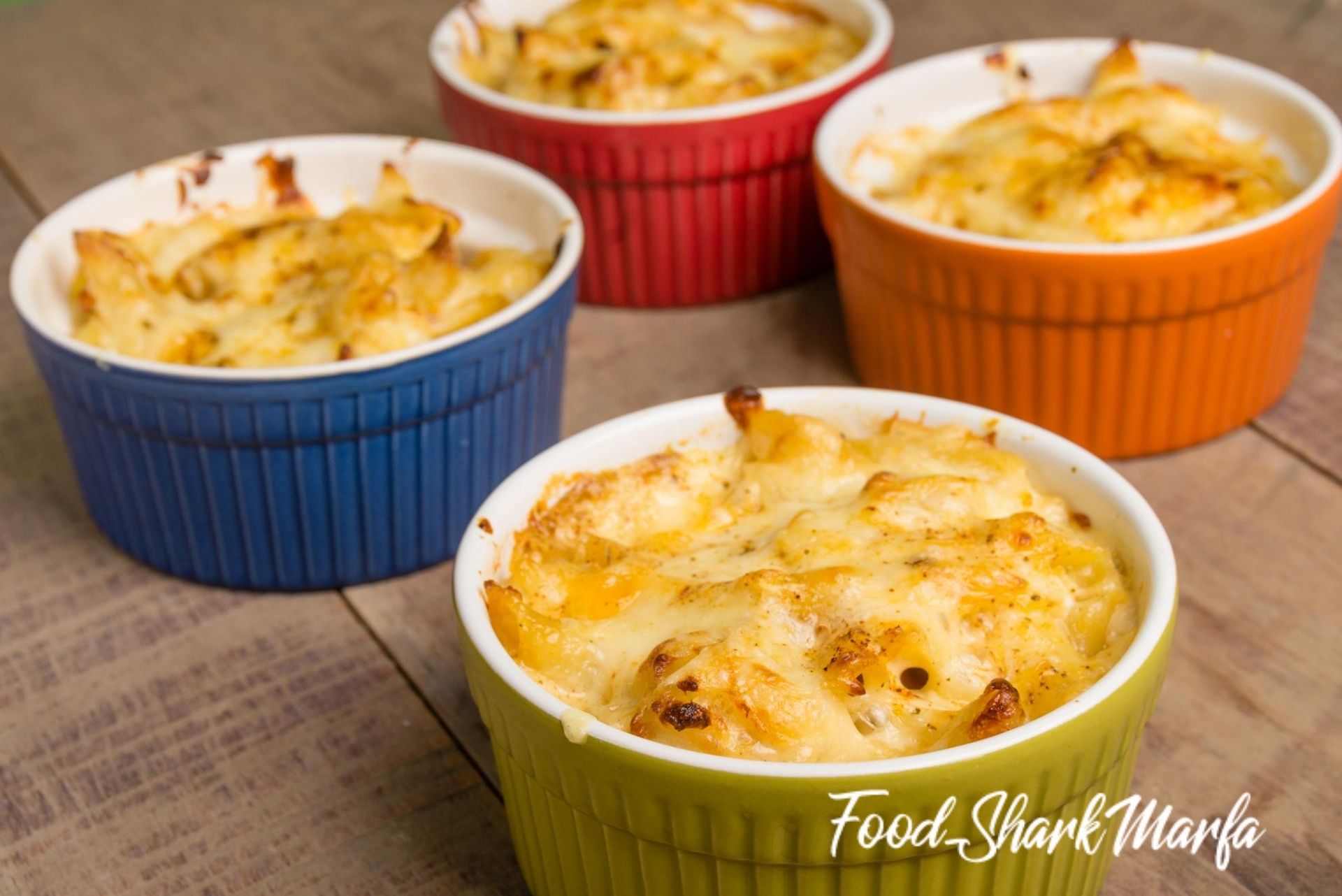 Place the wrapped mac and cheese into the refrigerator until properly cold and then transfer into the freezer. Make-ahead mac and cheese should keep for six months or longer, but to keep it at its best, eat within three months or so.

How to Thaw and Cook Make-Ahead Mac and Cheese

Place the uncooked mac and cheese in the refrigerator to defrost overnight. Once thawed, cook it as the recipe says but do keep an eye on it towards the end of the cooking time and be prepared to adjust the cooking time if necessary.

When using a thermometer, the middle of the mac and cheese should have reached a food safe temperature of 165°F before serving.

Unless you are freezing leftovers, you can usually take a couple of minutes off the cooking time as this means there is less risk of overcooking when you come to reheat it. After cooking, leave the mac and cheese on the countertop to cool down to room temperature. If this is a larger portion, it is safer to cool it in an ice bath.

You will want to freeze it in the portion sizes you will want to serve it in, so if you have made a big tray, then once cooled, split the mac and cheese into the right size portions.

For softer mac and cheese, use either Ziplock bags or airtight containers, while a firm baked mac and cheese can be wrapped in shrink wrap.

To bag softer mac and cheese, place each portion in a Ziplock bag, put the bag flat on the countertop, push the air out and seal. Keep the bag flat for now. If you are using Tupperware, then match up the size to the portion. The mac and cheese should almost fill the container, leave a small gap – around half and inch - at the top to allow any expansion during freezing. If you put a portion into a container which is too big, it will develop freezer burn faster.

For baked and/or firm mac and cheese, once cool, you can cut it into portion wedges and place each wedge onto a piece of shrink wrap which will be big enough to wrap around it a couple of times. After wrapping, add a layer of aluminum foil as this helps cut down freezer burn.

You can also use aluminum disposable tins as these can go straight in the oven for reheating once thawed, or for small/side portions, grease up a muffin tin with butter, add mac and cheese and wrap up the tray in shrink wrap. Once frozen, tip out the portions from the tin and place into a Ziplock bag.

Whichever way you have wrapped it, remember to date and label the portions before laying them flat in the refrigerator to fully cool and then transferring them to the freezer while they freeze. You may want to place bagged or wrapped portions on a cookie sheet until frozen, you can then take them off the sheet and move further into the freezer.

Cooked mac and cheese will keep at best quality for six months in the freezer and may even keep for as long as 18 months.

How to Thaw and Reheat Frozen Ready Cooked Mac and Cheese

As it contains cheese, the easiest and safest way to defrost mac and cheese is overnight in the refrigerator. You can heat it from frozen in the oven, but it takes a lot longer and there is more risk of overcooking.

Once thawed, take the mac and cheese from its bag or shrink wrap and aluminum foil and put it into a microwave safe bowl. Place a loose cover over the bowl and reheat. Depending on how many portions, this may take from around a minute to as long as ten minutes. Stop the microwave regularly, remove the lid and give it a quick stir before recovering and resuming the heating. You may also want to add some vegetables, extra seasonings or cooked meats to it while it is reheating.

You can also defrost or reheat it from frozen in the microwave, but this can dry it out more. If you do, then as above, stop the microwave frequently to stir it and if it too dry, add a couple of tablespoons of milk, water or other suitable liquid.

To reheat thawed mac and cheese in a pan, just add a little extra milk and stir it frequently under a low to medium heat, or in the oven at 350°F until it is piping hot (165°F) throughout.

If you are reheating a baked mac and cheese, then it is usually better reheated covered in the oven or microwave and be ready to add a little extra liquid to stop the macaroni getting too dry.

If you have thawed out too much mac and cheese, in theory you can refreeze it, but if it has been out at room temperature for any time then do not. Refreezing it can also cause a decline in consistency. You are probably best just refrigerating the excess and eating it as leftovers the next day.

Do You Need to Do Anything Different When Freezing Boxed Mac and Cheese? 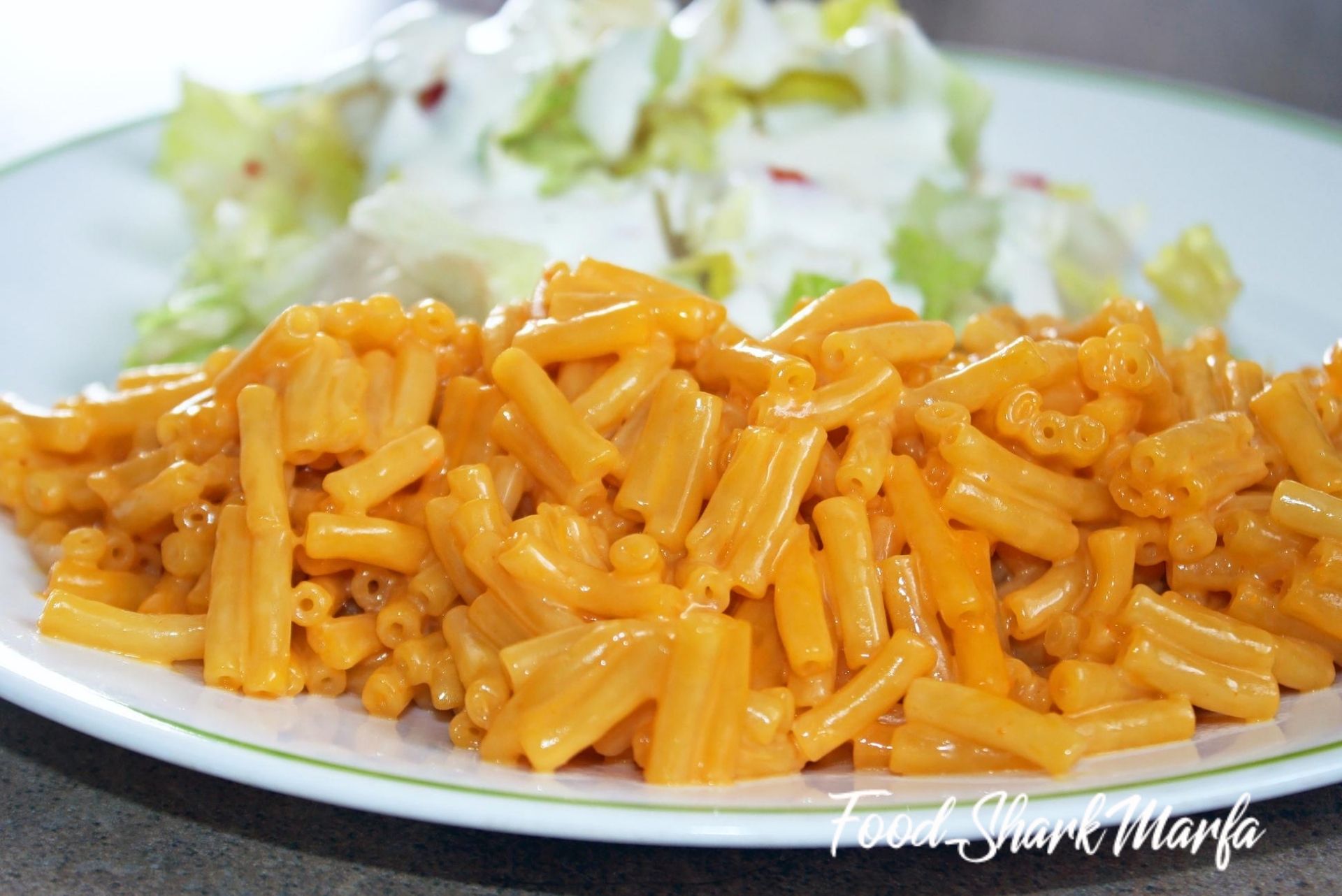 You can make boxed macaroni and cheese with butter and water instead of butter and milk as can help its texture stay better. If you do prefer to make it with the milk though, make sure you defrost it properly in the refrigerator before slowly heating on the stovetop and constantly stirring.

It can be heated in the microwave, but it does tend to end up a little on the crunchy side.

Can You Freeze Mac and Cheese Made with Velveeta?

Can You Just Freeze the Cheese Sauce?

Yes, you can just freeze the cheese sauce and then add it to freshly cooked macaroni. To freeze the cheese sauce, make it as usual then cool it on the countertop. Once cool pour it into plastic containers, or Ziplock bags. As a handy hint – stand the Ziplock bag up in a small bowl for easier filling. After removing the air from the bags, seal and lay flat on a cookie sheet. Place in the refrigerator until cold then shift to the freezer. The cheese sauce should keep at best quality for up to six months in the freezer.

How Easy Is It to Freeze Vegan Mac ‘n’ Cheese?

A vegan mac and cheese can be frozen as above, but there is more risk of non-dairy substitutes splitting when frozen.

In this post, I have shown that yes, you can freeze any type of macaroni and cheese, though depending on the type, you may need to make a few little tweaks either when preparing it or reheating it. Most mac and cheese will keep at its best for six months in the freezer.
5 / 5 ( 2 votes )