The menu at your local Chinese restaurant or takeaway will often offer egg rolls and spring rolls as appetizers. Although both are delicious there are some real differences between the two.

Just What Is an Egg Roll?

A literal translation of Jīdàn juǎn, egg rolls are available with different fillings, but popular fillings are pork, cooked cabbage and other vegetables such as bean shoots and carrots.

When you look at an egg roll, the first thing you will see is that it is bigger than a spring roll and its wrapper is bubbled, making it look like deep fried tortilla or deep fried pasta. Egg roll wrappers are made with flour, water, salt and egg and rolled thicker than spring roll wrappers. Some egg rolls are also made from egg noodle dough. 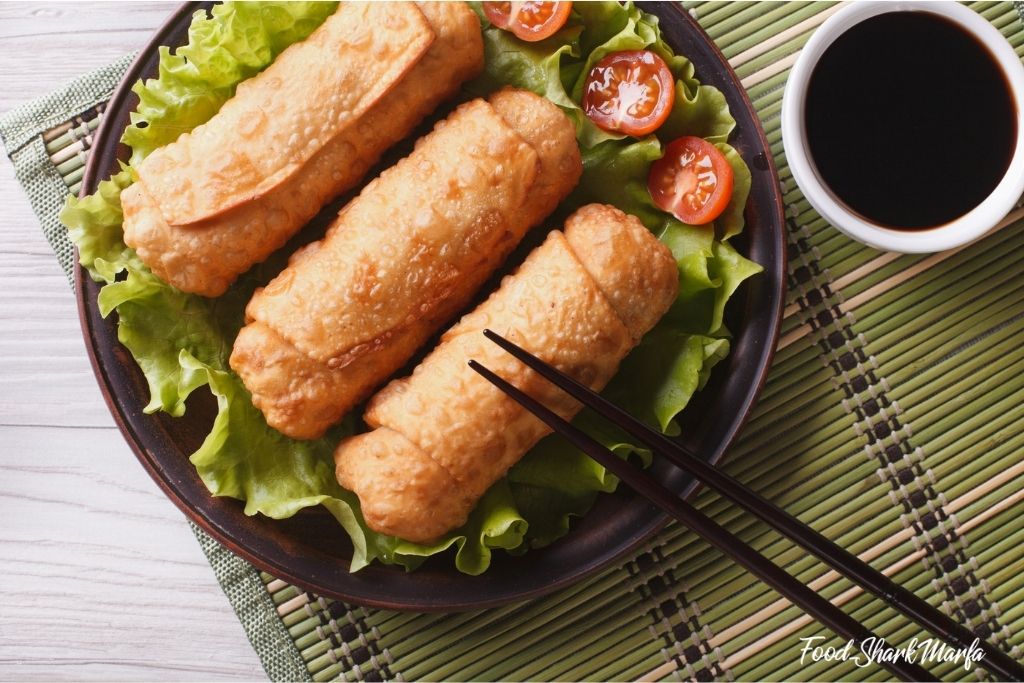 Once egg rolls are made, they are deep fried, or pan fried to give a crunchy outer wrapping and a chewy inner. Egg rolls are served hot.

Egg rolls are often considered an American Chinese invention and have only been around for the last century or so which is why they may sometimes be on the ‘Westernized Food’ list at some Chinese restaurants. It is thought that the egg roll came about as a snack developed to appeal to co-workers of the Chinese immigrants who were working as railroad workers.

Just What is A Spring Roll?

In Chinese, the name spring roll is a literal translation of Chūn juǎn and spring rolls are sometimes called spring pancakes or pancake rolls. They have been around for thousands of years. Historically, on the first day of spring, Chinese people would make thin pancakes from flour and fill them with fruits and vegetables. These would then be sent as gifts to friends and relations. Over time, this early spring roll became the type we are familiar with today. 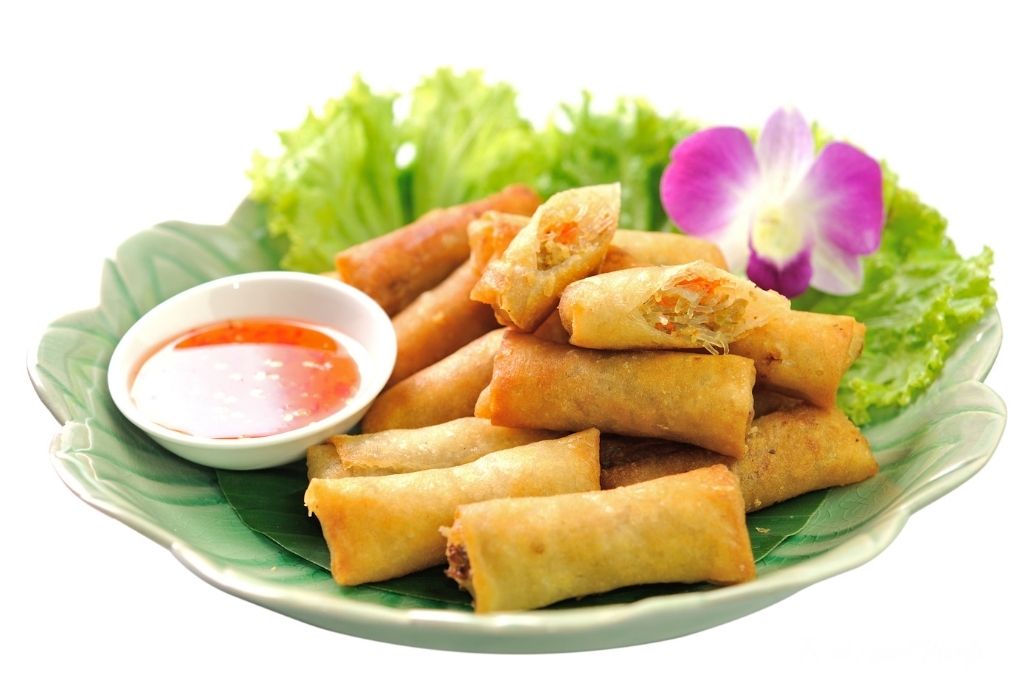 The wrappers for spring rolls are made from flour, water and salt to give a light, translucent, smooth and crispy wrapper.  Once the filling is added, the spring rolls are steamed, baked or fried, unless they are wrapped in rice paper in which case they are always steamed. Spring rolls can be served hot or cold. When you bite into a spring roll, the wrapper usually breaks into crispy and light pieces.

Although egg rolls have been popular in the US for a while, spring rolls became fashionable in the 1980s when people started to cut back on some of the deep fried foods – such as egg rolls – in their diets.

Vietnamese egg rolls, chả giò or nem rán, are like egg rolls in that they are made with ground pork, crab meat, shrimp, carrot and noodles. These are then deep fried and served with a sweet and spicy dip (nuoc cham) and can be eaten as they are, or alongside a main dish.

Known as gỏi cuốn, Vietnamese spring rolls have rice paper wrappers and fillings typically of pork, prawn, vegetables and rice vermicelli. These are not cooked on the outside like regular spring or egg rolls and are instead served at room temperature. 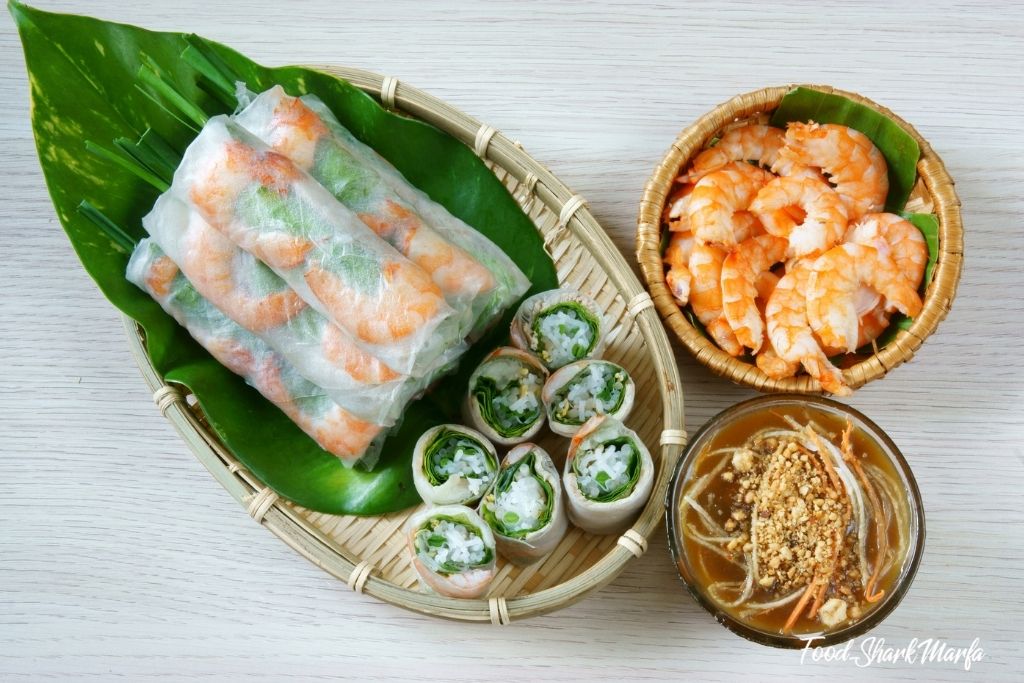 Sometimes called salad rolls or fresh spring rolls, summer rolls are also Vietnamese. Summer rolls have a rice paper wrapper which is filled with pork or shrimp, carrot, cucumber, lettuce, vermicelli noodles and herbs such as cilantro or Thai basil. 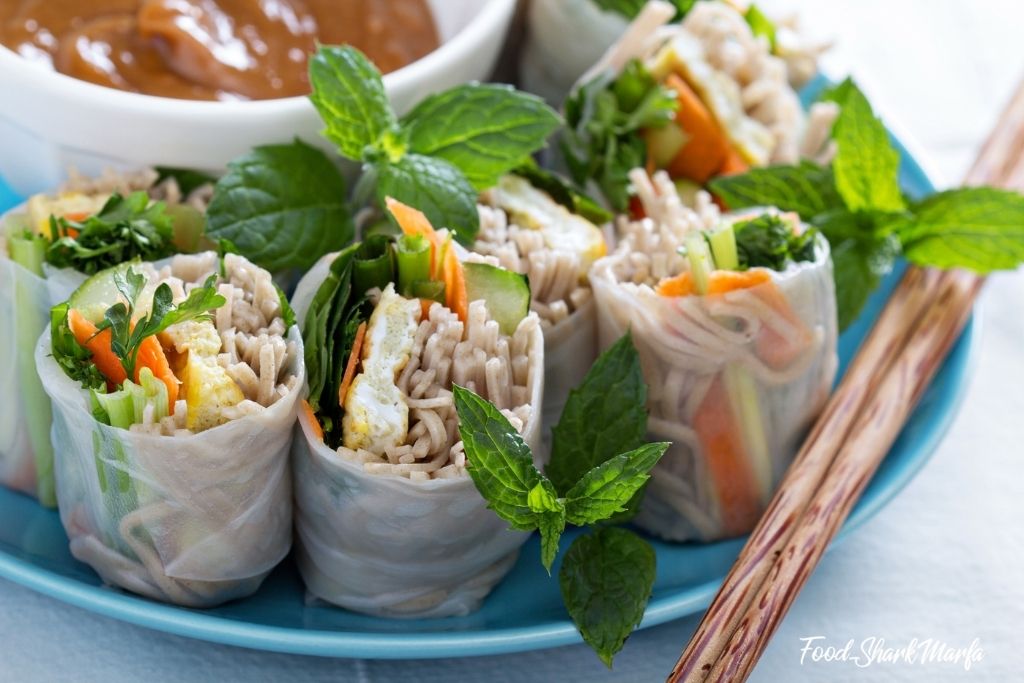 Summer rolls are served fresh with dips such as sriracha, peanut sauce or hoisin sauce.

Like the Vietnamese spring and summer rolls, there are similar types of spring rolls and egg rolls in other regional cuisines, not least Thai and Indonesian.

Lumpia is one such roll. Lumpia is a Filipino roll made with a flour and corn starch or rice paper wrapper that does not contain egg. Like egg rolls though, lumpia contain shredded or chopped vegetables such as carrot, cabbage and bamboo shoots along with shrimp, beef or pork however, it is how lumpia is seasoned - with coconut, chili and cilantro - which makes it stand out against a regular egg roll. 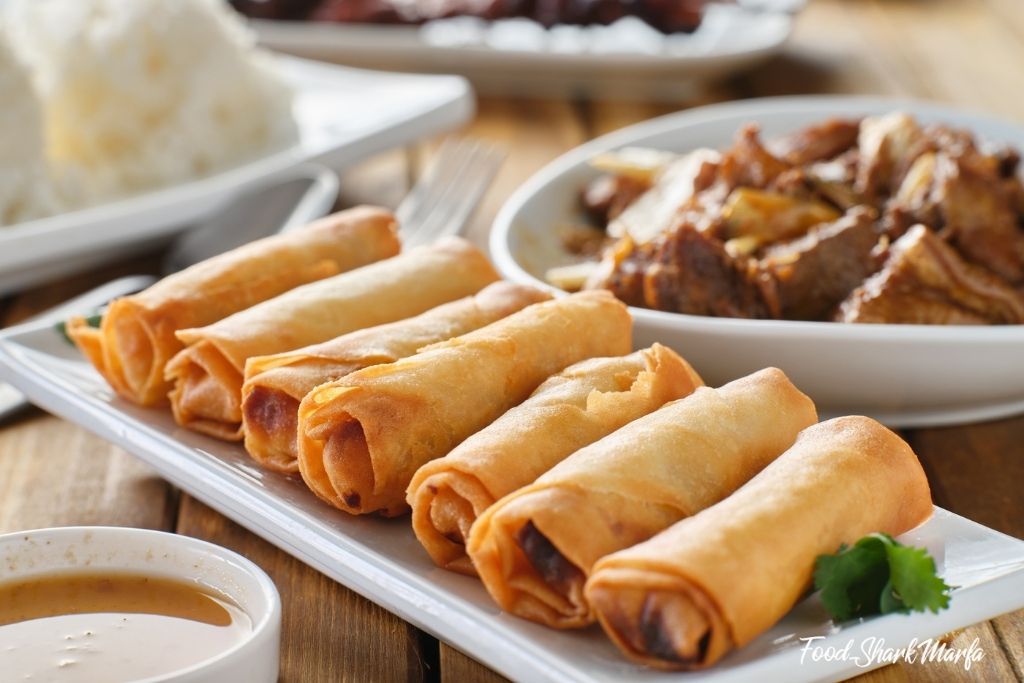 Just to make things more confusing, lumpia in rice paper wrappers are often served fresh and cold and may also be called summer rolls while lumpia that are fried can also be called spring rolls.

As egg rolls and spring rolls contain different fillings and can be cooked differently, it is hard to compare the nutrition however because egg rolls usually contain meat while spring rolls are often vegetable based, egg rolls tend to be a better source of protein.

A typical vegetable spring roll can provide around 60 to 110 calories while the bigger size and meat content of egg rolls pushes the calorie content up to as much as 190 calories and egg rolls are usually higher in fat.

Rather than making the wrappers yourself, the easiest way to make egg rolls and spring rolls at home is by buying the wrappers from a specialty grocery store or market then you can just fill, wrap and cook the rolls.

To make basic egg rolls, you will need to sauté your shredded vegetables, ground meats or seafood with minced garlic, then add a little soy sauce and sesame oil before spooning the cooked filling onto the wrapper.

There are different ways to wrap an egg roll, but an easy way is to wrap it just like a burrito. Just lay the wrapper out flat and add a little egg wash to the top and bottom of it before adding the filling towards the bottom – leaving space at either side. You can then fold in each side then roll it up from the bottom. If it does not stick properly when fully rolled then use a bit more egg wash on the edge. You can also fold the wrappers envelope style which can take a bit more practice. The wrapped egg rolls will then need coating with egg wash before deep frying.

Spring rolls are made in the same way as egg rolls, except you need to leave the filling mix to cool fully before adding it to the spring roll wrappers. Once you have folded the wrappers you can seal with egg or a cornstarch slurry before frying, air frying or baking them.

Egg rolls and spring rolls can also be frozen uncooked or cooked for using another time. 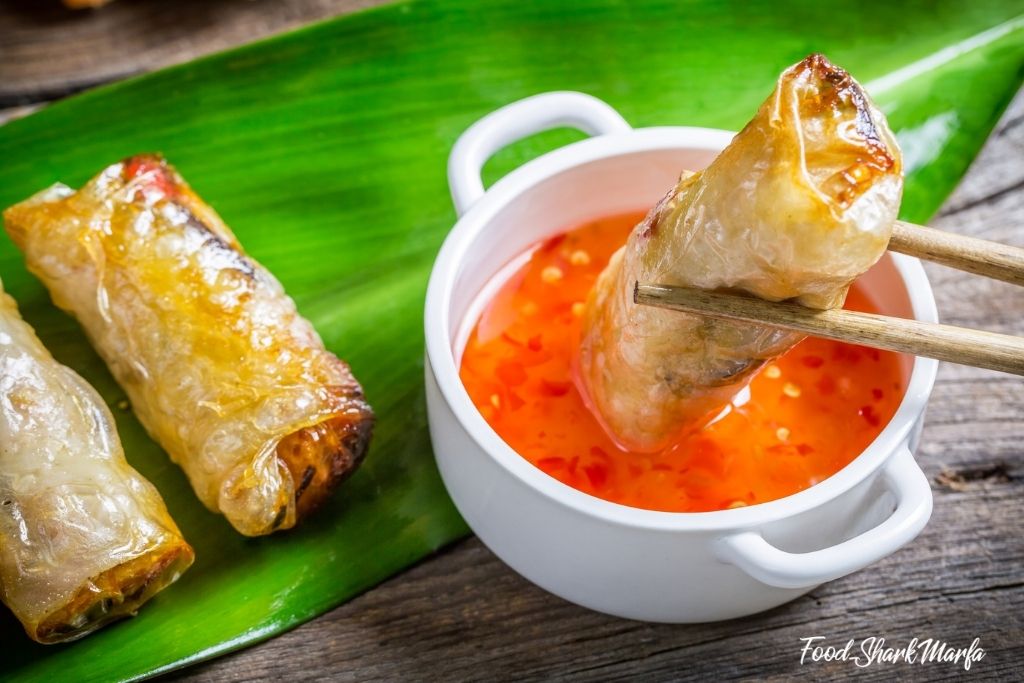 If you admit to having thought about the difference between egg rolls and spring rolls then we hope that you have found this post interesting.

Just to sum up, egg rolls are a modern food filled with meats and vegetables and the wrappers are made with egg to give them a bubbled and crispy finish, while traditional spring rolls are smaller, often vegetable based and the wrapper is made with flour and water, or rice paper. Unlike egg rolls, spring rolls can be baked or steamed as well as deep fried.
5/5 - (2 votes)

Rosie is a firm believer in kitchen tech that lets us spend less time time actually preparing food and more time enjoying it with our family and friends! Rosie is also a keen cook and enjoys cooking up foods from many cuisines, not least Brazilian, Mexican, Middle Eastern and Thai.

Rosie is a firm believer in kitchen tech that lets us spend less time time actually preparing food a...