Most of us keep canned tuna around, maybe to add some extra protein to a salad, for sandwiches, or even just to store in the Emergency Preparedness bag.

It can often be the case that old cans come to light when clearing the pantry out, so in this post, I answer the all important question of how to tell if canned tuna is bad in four simple steps. If your can of tuna moves through these steps without any worries, then you should be able to serve it up on some rye, rather than just trashing it! I also look at how to store canned tuna properly when unopened and opened.

Unopened canned goods, including tuna should be stored somewhere cool and dry and away from any direct sunlight. A kitchen cabinet away from the stove or a pantry is usually fine. Canned tuna is known as a shelf stable food. 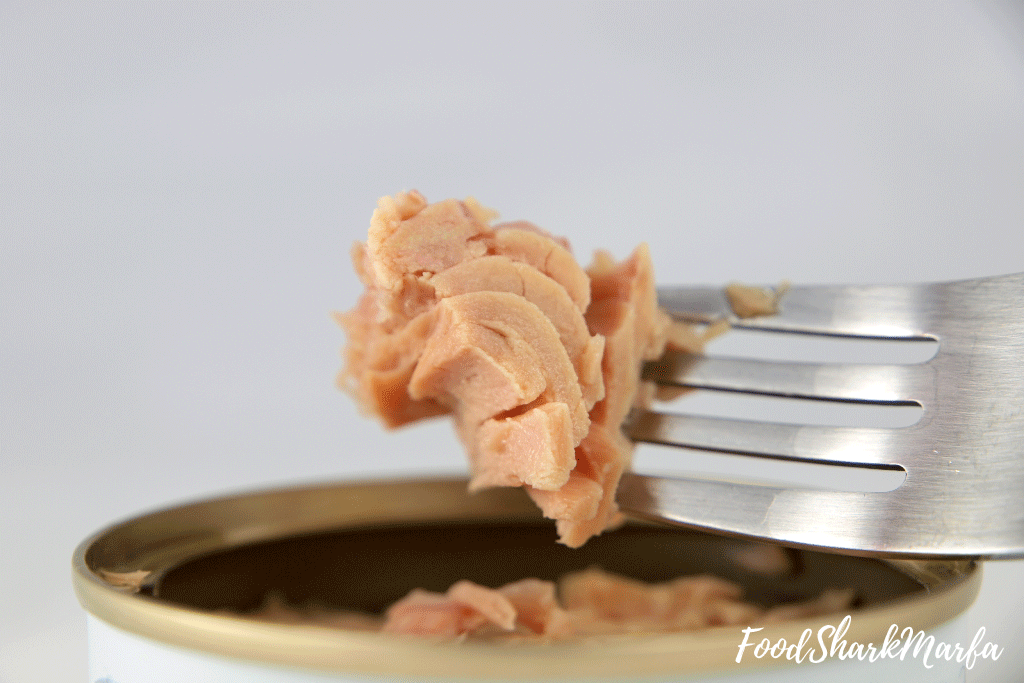 Once canned tuna or other canned foods are opened, they need to be refrigerated. It is always best to tip the leftovers into an airtight container before refrigerating and then use up within three to four days of opening. Once a can has been opened, you can also place the leftovers into the freezer.

Canned tuna can keep for up to three months in the freezer, just make sure you put it into an airtight container first, it cannot be frozen in the can. You can also use a Ziplock bag, leave the tuna flat so it can freeze evenly and remove the air from the bag before sealing. Don’t forget to jot ‘canned tuna’ and the freezing date on the bag or container before you freeze it.

When you come to use the tuna, leave it to defrost in the refrigerator. Depending on how much you have frozen, this may just take a couple of hours, or as long as overnight. Never defrost at room temperature as this can increase the risk of foodborne illness.

How to Tell if Your Canned Tuna is Bad

In the following section, I detail the four steps to take to assess whether your canned tuna is bad. If after following these steps, you are happy with the canned tuna, then you should be fine to go ahead and eat it, but if you are ever in any doubt, then always throw it out!

Step 1 – Consider the Date on The Can

The date on canned tuna is a ‘Best if Used By’ food product date. However, canned tuna stored under cool and dry conditions can be shelf stable for as long as five years after this ‘Best Before’ date.

The date will always indicate a month and year and will also say whether it is ‘Best if Used By/Before’ or ‘Use By’ or ‘Must Use By’.

Foods which say ‘Must Use By’ or similar should always be used by this date. These are usually fresh items such as meat and poultry.

The food product date on canned tuna is the date determined by the manufacturer to be within the timeframe in which the quality of the food will be at its best. It is not a safety indicator as such and when a ‘Best if Used By’ date has passed, it does not necessarily mean the canned tuna has gone bad.

When manufacturers set ‘Best Used By’ dates, they consider the food itself, its packaging and how long and in which environment the food will be for sale/stored in. The date also helps stores know how long they can display/sell the food for.

The confusion around the different terminology used in food product dating is often the main reason for households disposing of food which would otherwise be safe to eat.

Except for infant formula, Federal regulations do not require manufacturers to date their products unless the foods (such as meat and eggs) comes under FSIS regulation.

All of this means that the date on that can of tuna is not a great indicator of whether the tuna is bad, as the ‘Best Before’ is an indicator of quality, not safety of the food. Charitable organizations may also accept canned products after the ‘Best Before’ date if there are no other signs of spoilage (keep on reading to learn more).

However, just to reduce the risk of lots of old cans building up in the pantry, when you buy new cans, it is useful to check the ‘Best if Used By’ dates on the cans already in the pantry and rearrange them so the cans nearer the date will get opened first.

Step 2 – Consider the Quality of The Tuna Can

As with any canned food, there are a few things to check out before you think of opening it. If the can is leaking at all, then dispose of it straight away. A leaking can is a sign that something has gone wrong during its processing which means there is no guarantee it is safe to eat.

Look for any signs of corrosion or rust on the can. Although the contents may still be fine from a rusty can, there is a risk that the corrosion has caused tiny holes to appear in the can – allowing air to reach the contents. If you can remove the rust spots with your fingers, then it should be fine to move onto the next step. 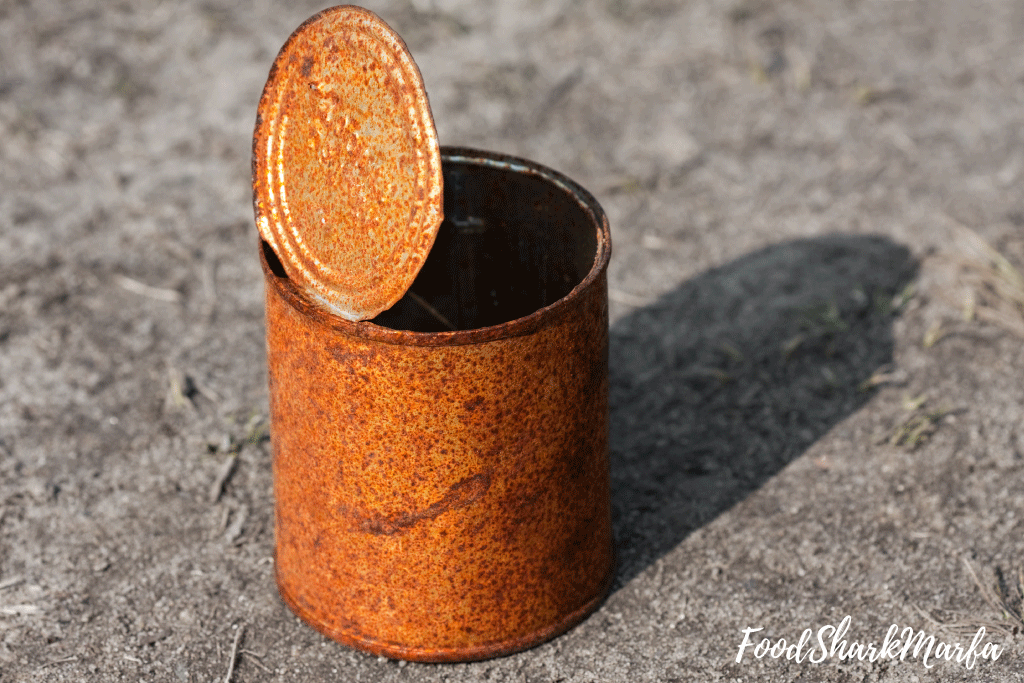 Canned tuna dented on the side may still be safe to eat, although factor in that a dent can shorten its shelf life. FSIS say if the dent is deep enough for you to lay your finger in then dispose of it. If a dent of any size is on the seam of the can then it should also be trashed as the dent may have damaged the seam.

If, however, the can is bulging out at the top or bottom, always trash it! Bulging can be a sign that the pressurization of the can has been affected which can allow bacteria to develop inside the can. More worryingly, it can also be a sign of botulinum spore activity.

Botulism is a thankfully rare foodborne illness cause by Clostridium botulinum. These bacteria usually live harmlessly on the ground, in river and sea waters, but under the right conditions, can become active and once active, C. botulinum releases potent neurotoxin spores which can be deadly.

There have been a couple of instances of botulinum being linked with canned tuna and in fact, there was a recall of a brand of albacore tuna in 2015 which was linked to botulinum. There was a more recent botulinum outbreak in Spain, in which four people became ill. The risk of botulinum is greater from home canning than commercial canning.

A leaking, very rusted, heavily dented or bulging can of tuna is not safe to eat.

If you buy tuna in pouches, then similar principles apply. If the pouch is bulging or leaking, then dispose of immediately.

When you open the can there can be a loud noise – different to the hiss you usually hear - or even a small chance of the tuna projecting from the can as you open it. If either of these happen then trash the can.

When you open a can, the smell is the first thing you get; even before you have fully removed the lid from the can. Remember that canned fish and other canned products can smell quite pungent when a can is opened, and this is normal. Canned tuna is quite meaty smelling with hints of the ocean. The odors you want to check for are ‘off’ or acidic smells; or any odor that does not smell as expected from canned tuna.

Tuna which is canned in oil can also start to go rancid and you will be able to smell some of the rancidity.

If you are not happy with the smell, then trash it and give your hands a good clean afterwards.

As well as the aroma, look at the tuna itself. Depending on the species of tuna, the color of canned tuna varies. Manufacturers may also treat raw tuna with carbon monoxide to help it keep its color during canning. Normal canned tuna can be anything from pale pink to beige, to bright red in color and it may also have a slight brown tint to it.

If it has gone bad, or is starting to go bad, the tuna can have dark brown streaks running through it, in fact, these streaks may look black. On occasions, the tuna may also be green. If the tuna is streaked or green, then dispose of it immediately.

Also check the inside of the can for evidence of rust. If you can see rust on the inner can, also dispose of it.

If the can explodes when you open it, is rusted inside, or the tuna does not smell like canned tuna then it is not safe to eat.

If you have happily moved through the previous three steps and there is nothing of concern, then the final step is the taste test. Just take a tiny amount from the can with a spoon or fork and see whether it tastes as it should. 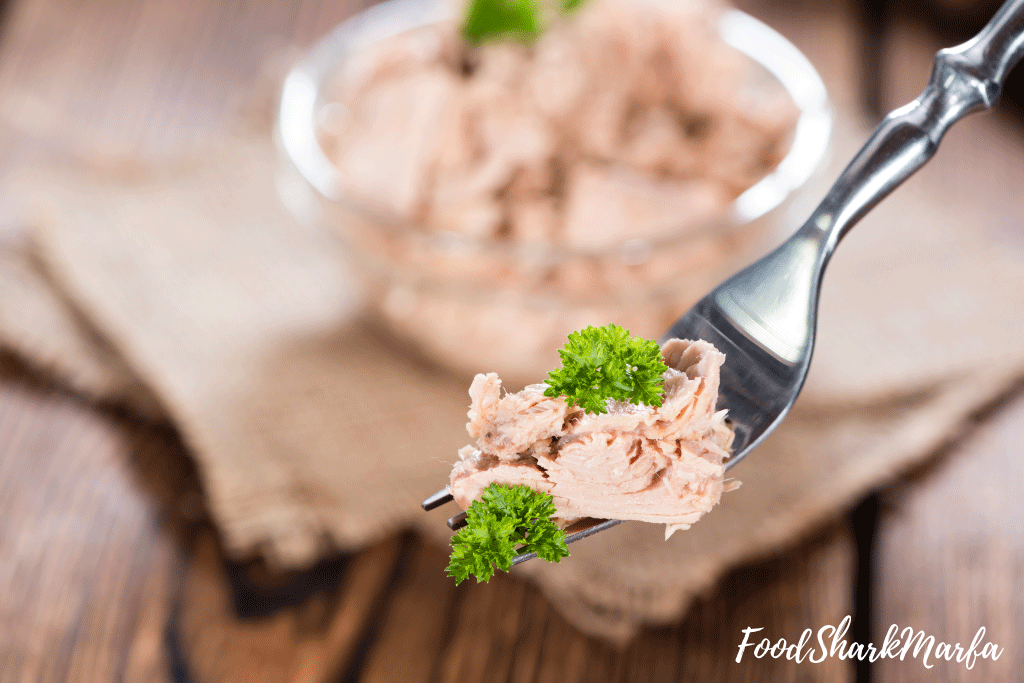 If it does not taste like you expect it to taste, then trash it.

As you will have seen from this post, there is no straightforward answer to the question of how to tell if canned tuna is bad. Even canned tuna a few years past its ‘Best Before’ date can still be good to eat, if the can is in good condition, it smells and looks as it should do and of course, it still tastes ok.

I have tried to detail all the different signs which can mean canned tuna (or other canned foods) are bad, but it is worth reiterating once more that even if you have gone through the four steps above and are still unsure, then play it safe and trash it. Better to be down the cost of a can of tuna than ending up with a bad case of foodborne illness!

I trust you have found this post informative and feel free to share it with your friends for their information too. I also hope the next time you come across some long-forgotten canned tuna, that you will feel comfortable enough in deciding whether it is safe to eat.
5 / 5 ( 1 vote )