Blackcurrants or black currants are small black berries from the woody Ribes nigrum shrub, part of the Ribes genus in the Grossulariaceae (gooseberry) family. There are many different varieties of blackcurrants including European and native American varieties.

Blackcurrants have thin skins and very juicy and soft inners that also contain small seeds that you eat with the berries.

They have a grape-like and slightly acidic aroma with hints of cherry. When blackcurrants are dried, they can also have aromatic hints of wildflower and vanilla.

Taste-wise, they are usually too tart to eat raw, as they do have a high tannin content, but when fresh, they have a strong and dark berry flavor with earthy notes. When blackcurrants are dried, they tend to be sweeter and look like small raisins.

Blackcurrants can be an acquired taste for some, but when cooked, they lose most of the earthy notes that can be off-putting to some. 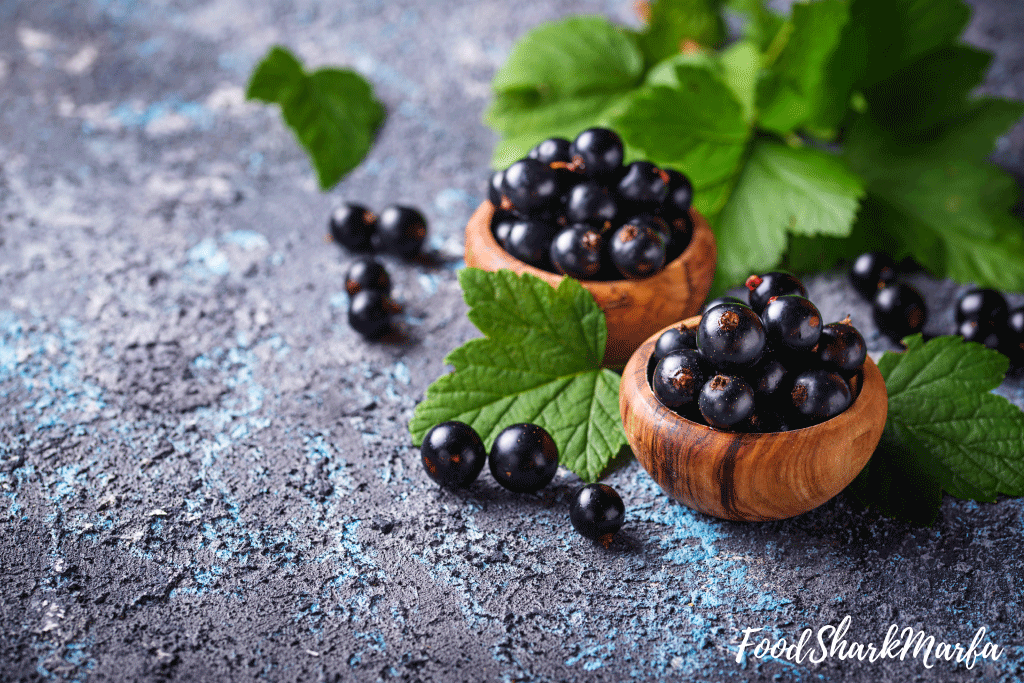 Read on to learn more about blackcurrants and the easiest ways to try them in the kitchen. We also look at the history of blackcurrants and why they became both a forgotten and forbidden fruit in the US. We’ll also take a look at how they’re making a comeback today as more and more people are discovering how nutritionally valuable these small berries are.

Blackcurrant is often spelt as one word but is also written as black currant. This means that if you are looking for dried blackcurrants, it is always worth checking the packaging carefully to ensure you will be buying the berries that you want, rather than currants for a cake.

Perhaps the French make it easier, in that they call currants ‘raisins de Corinthe’ and blackcurrants, ‘cassis’. Blackcurrants are the main ingredient in the crème de cassis alcoholic cordial used to make Kirs or Kir Royales drinks.

If you buy something that has ‘cassis’ flavoring, then there will be some blackcurrant in it.

Fresh blackcurrants, or indeed their redcurrant or white currant cousins, are much harder to source fresh in the US. The farmers market or a specialty store will usually be the best place to find them if fresh blackcurrants are available for sale in your state. They are usually sold on the stem.

When buying fresh blackcurrants look for ones that are black or dark purple in color with skins that are clear and slightly glossy. They should also be firm and not shriveled. They are available from early June until as late as September, depending on the region. 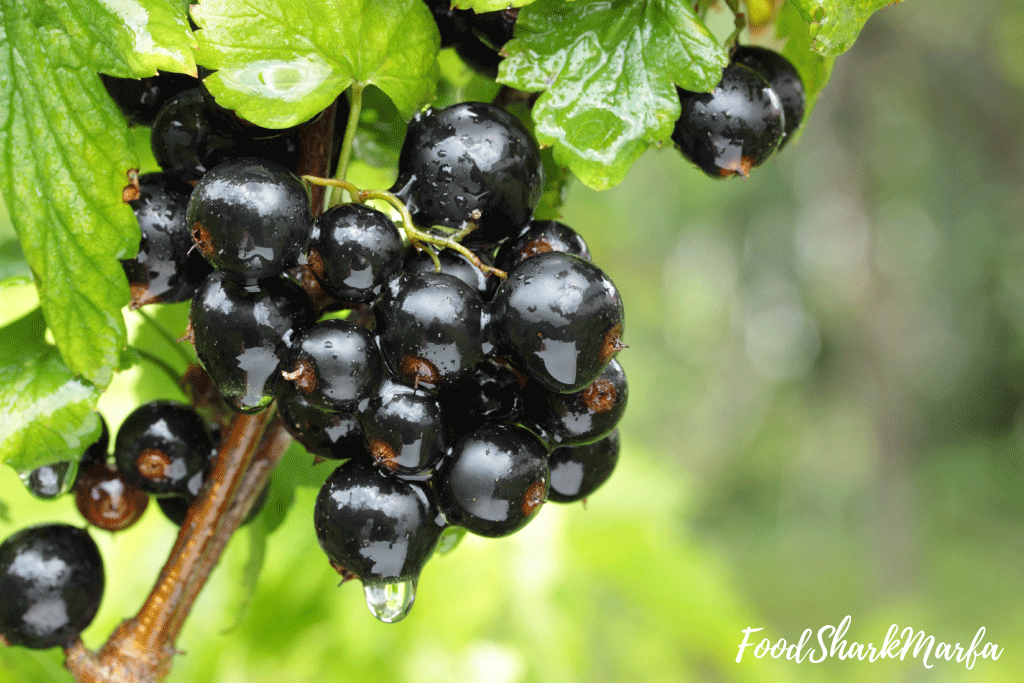 ​Like other berries, blackcurrants do not keep long once picked. They are better stored covered in the refrigerator where they should keep at their best for a few days. Blackcurrants should only be washed when you are ready to use them, as they can quickly become moldy if washed before being put in the fridge. When you come to use them, take off the stems and tips before cooking.

Blackcurrants can be frozen. Just take off the stems and tips, wash and dry them and lay them out on a cookie sheet. Place it in the freezer and once the blackcurrants are frozen, pop them into a zip bag.

Blackcurrants can also be dried in the dehydrator for later use.

Easy Ways to Try Out Blackcurrants

Blackcurrants can often be used in place of other berries such as blueberries, raspberries or blackberries in desserts such as muffins, scones, tarts, puddings, cobblers, cheesecakes and pies.

Jellies, jams or chutneys are also popular for blackcurrants and they can be made into juices, added to yogurt, smoothies, ice creams, sorbets and more.

Blackcurrants go well with other summer fruits such as strawberries and raspberries and these will also help tone down some of the stronger flavors of the blackcurrants. They also complement apples quite nicely.

You can add blackcurrants to homemade mincemeat at Christmas, dark chocolate recipes or use them to add some tartness to tropical fruit salads which can otherwise be on the sweet side. 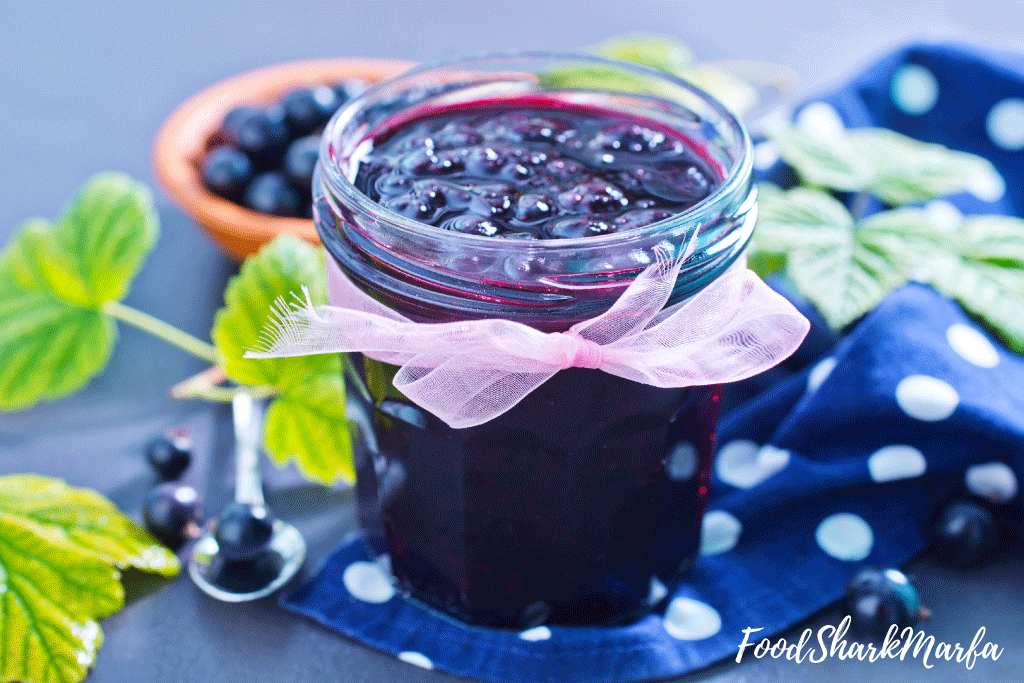 Blackcurrants pair well with darker meats and will make a rich sauce or glaze for pork, duck, venison and more.

Perhaps the easiest way to try out blackcurrants is by adding some fresh ones to the pan with a little water and sugar or sweetener and gently cook until the berries burst. This sauce can then be poured over fresh fruits, ice cream or cheesecake.

You may also want to make some fresh blackcurrant juice for a good antioxidant boost. Place 10 fl. oz of water and 10 oz of sugar in a large pan and bring to a simmer over low heat. Add one pound of blackcurrants and the juice and zest of two lemons. Continue to simmer gently while the blackcurrants soften and burst their skins.

This juice can then be strained through a jelly bag or muslin and the strained juice placed into sterilized bottles. This will then keep in the refrigerator for a month or so. Add the blackcurrant juice to water or soda at a ratio of around 1:4 to dilute.

The Importance of Blackcurrants in Europe

Blackcurrants are native to northern Europe and Asia and were originally cultivated in Russia in the 11th century. By the 17th century, they were being cultivated in Europe, and not just for food; the leaves, roots and bark were often used in medicinal remedies.

Often termed a ‘forgotten fruit’, blackcurrants played a vital role during the Second World War. When the UK was unable to obtain citrus fruits from Europe due to German blockades, the UK government designated blackcurrants a suitable substitute and children under the age of two were given free doses of blackcurrant syrup (to help prevent vitamin C deficiency).

With many encouraged to grow blackcurrants at home and commercially during this time, folks in the UK developed a real taste for the blackcurrant. This still exists, with the blackcurrant beverage “Ribena” remaining a popular drink with kids and adults. Much of today’s blackcurrants are grown for juice, with Europe producing 99.1% of commercial currants (blackcurrant, redcurrants and white currants). 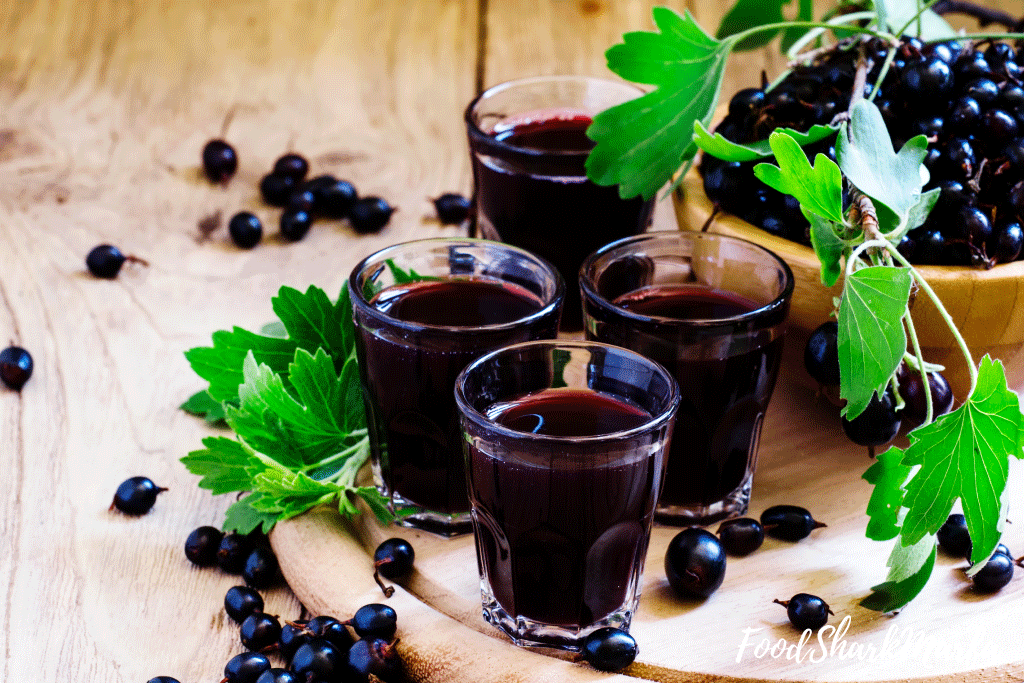 Even today, purple candies in Europe are usually blackcurrant flavor rather than grape.

Why Blackcurrants Became Forgotten and Forbidden in the US

Blackcurrants were available in the US at one time and in fact, in 1899, there were over 12,000 acres of blackcurrants grown commercially.

In time, it was found that other plants, including some native to the US were, like blackcurrants, able to function as an intermediate host or vector to WPBR.

During 1966, the federal ban on blackcurrants was moved to state jurisdiction and eventually bans started to be lifted in some states, including New York State in 2003. This was after a successful lobby and the development of varieties of disease-resistant blackcurrants.

Currently, the USDA does not track blackcurrant production, so it is difficult to estimate how many are grown, but there are blackcurrant farms in New York, Connecticut, British Columbia, Washington and Canada.

With three to four times the amount of vitamin C found in oranges by weight and twice the antioxidant content of blueberries, it is little wonder that blackcurrants are beginning to make a reappearance in the US.

Even after six months of storage, it has been found that blackcurrant juice can still contain as much as 250 milligrams of vitamin C per 100 ml (3.4 fl. oz) of juice. 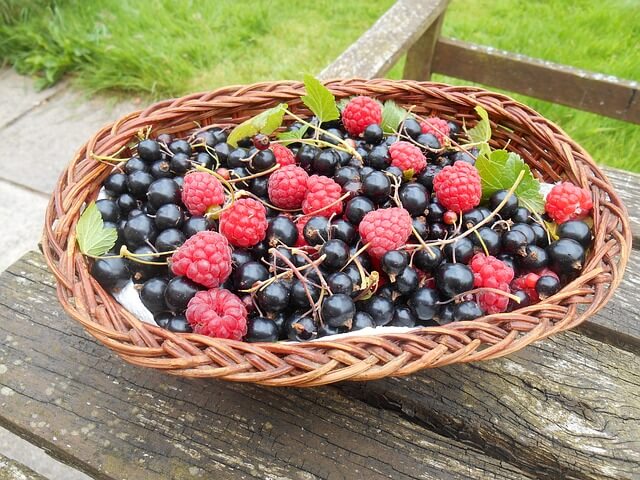 As well as a one ounce serving of fresh blackcurrants providing 57% of our daily requirement of vitamin C, it also contains small amounts of other vitamins including A, B6, B12, E and more.

Vitamin C, or ascorbic acid, is an antioxidant, which means it helps fight against damage caused by free radicals in the body. Free radicals form because of our metabolic processes, and we are also exposed to them from our environment, such as through air pollution and UV light from the sun.

Vitamin C also has other roles, including supporting our immune system and helping wounds to heal.

Vitamin C deficiency is rare nowadays in the US, but scurvy is the main disorder caused by a lack of vitamin C. Symptoms of this include joint pain, bleeding gums and tooth loss, anemia, small purple or red spots on the skin and poor wound healing.

Blackcurrants also contains minerals such as iron – essential for production of red blood cells –  and copper, which the body needs for metabolism and collagen production. Copper also helps absorb iron and helps fight some of the free radical damage in the body. Having an adequate copper intake is linked with a lower risk of developing anemia, osteoporosis and osteoarthritis.

Dried blackcurrants are also a good source of nutrition. Containing soluble and insoluble fiber, a half cup of dried blackcurrants provides 5 grams of dietary fiber– around 20% of our recommended daily intake. This same portion of dried blackcurrants will also give you around 37% of your daily requirement of copper and 15% of manganese which is needed to help support hormone production, fertility and other processes.

A half cup of dried blackcurrants also contains around 14% of our potassium requirement. This is one of the seven essential macrominerals, which our body needs to support some of its processes. Potassium specifically helps support cardiovascular health, bone and muscle health.

Not having enough potassium in the body is linked with cardiovascular disease and high blood pressure. Potassium also helps preserve muscle mass in older people which can be lost through the process of metabolic acidosis – often triggered by our typical western diet of processed cereals, dairy and meat products.

Gamma linolenic acid (GLA) is found in blackcurrants as well as in the seeds and oils of other plants. GLA is a polyunsaturated or omega-6 fatty acid. These fatty acids are found within the membranes of our cells and play a role in signaling, enzyme reactions and more, influencing immune and inflammatory processes.

Research has shown that GLA can provide some relief to those with rheumatoid arthritis, and although research is limited, it may also help in lowering LDL (‘bad’) and overall cholesterol levels.

GLA with other compounds is also linked with better eye health, with research showing that blackcurrant can improve blood flow to the eyes, reduce symptoms of eye fatigue, improve the ability to adapt to darkness and slow some of the deterioration of the visual field in those who have glaucoma. It may also be helpful for those who suffer with Dry Eye Syndrome.

Gamma-linoleic acid (GLA) along with potassium can also prevent aggregation or platelet clumping in the blood vessels. When blackcurrant was given as a powder supplement in a research study, the results showed athletes were able to recover better after exercise.

The dark color of blackcurrants comes from anthocyanins, which are flavonoid compounds. These are natural antioxidants which help combat damage from free radical molecules in the body.

Other parts of blackcurrant plants, such as the seeds and leaves, are also used as supplements and blackcurrant seed oil, which has been shown to improve the immune response in healthy volunteers aged 65 or older.

Although the blackcurrant may have been forgotten and forbidden in times past, this small but mighty super fruit is staging a welcome comeback – in some states at least!

Although the strong berry flavor and earthy notes of raw blackcurrants will not be appreciated by all, when cooked, they do lose some of those earthy flavors.

If we have yet to convince you that fresh blackcurrants are worth a try, then why not pick up some dried blackcurrants? When dried, they have a sweeter flavor and make it easy to add a nutrition boost to your favorite dishes.