With many of us still preferring the convenience of paper napkins, this means that a napkin holder is still an essential in our homes. Able to keep paper napkins accessible and tidy, the napkin holder is also easy to move around the home and even out into the garden for those summer grills.

In this article, we review ten of the best napkin holders available, as well as taking a look at the napkin holder itself, how it evolved, and we even offer a few suggestions for what else you can keep tidy in your home with the help of a napkin holder! 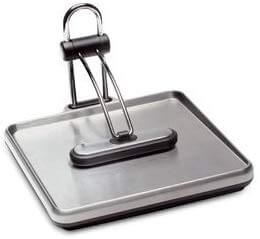 Our Best Pick is the Simplehuman Quick Grip napkin holder with its weighted tension arm for taking just one napkin at a time. 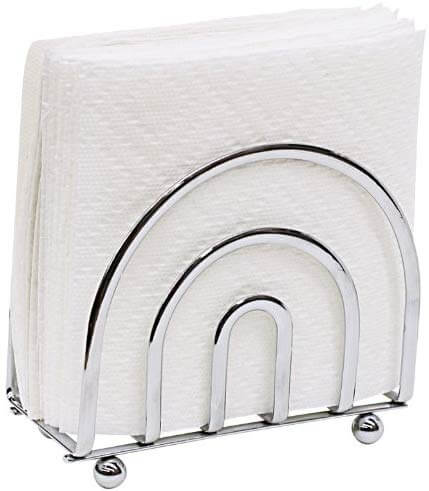 Our Budget Pick is the Home Basics napkin holder with its chrome finish and weighted base for ease of use indoors or out.

Able to hold up to 75 square standard sized paper napkins, the Simplehuman Quick Grip napkin holder has a weighted tension arm allowing you to remove just one napkin at a time. Made from stainless steel, the non-slip base of this horizontal napkin holder is also designed to cradle the napkins to keep them tidy. This comes with a five year limited warranty from the manufacturer.

This napkin holder is unsuitable for rectangular napkins and it will also struggle with larger dinner napkins. Some owners have found that the tension of the arm on this holder is not always enough to prevent more than one napkin being removed at a time.

The freestanding Home Basics napkin holder is constructed from heavy duty steel with a weighted and raised base to keep it steady even when outdoors. With a chrome finish, this napkin holder holds napkins upright and measures 5½" high by 2½" deep by 5" long. This is easy to wipe over or can be washed with mild soap and water.

This napkin holder may not be as heavy duty as expected, and depending on the size and quantity of napkins, they may occasionally fall out of the holder. The quality of the welding may not be as high standard as it could be, and you may find the odd sharp edge that needs filing for safety. Some buyers have also found that the ball feet can be uneven, and this may prevent it standing properly on a flat surface. 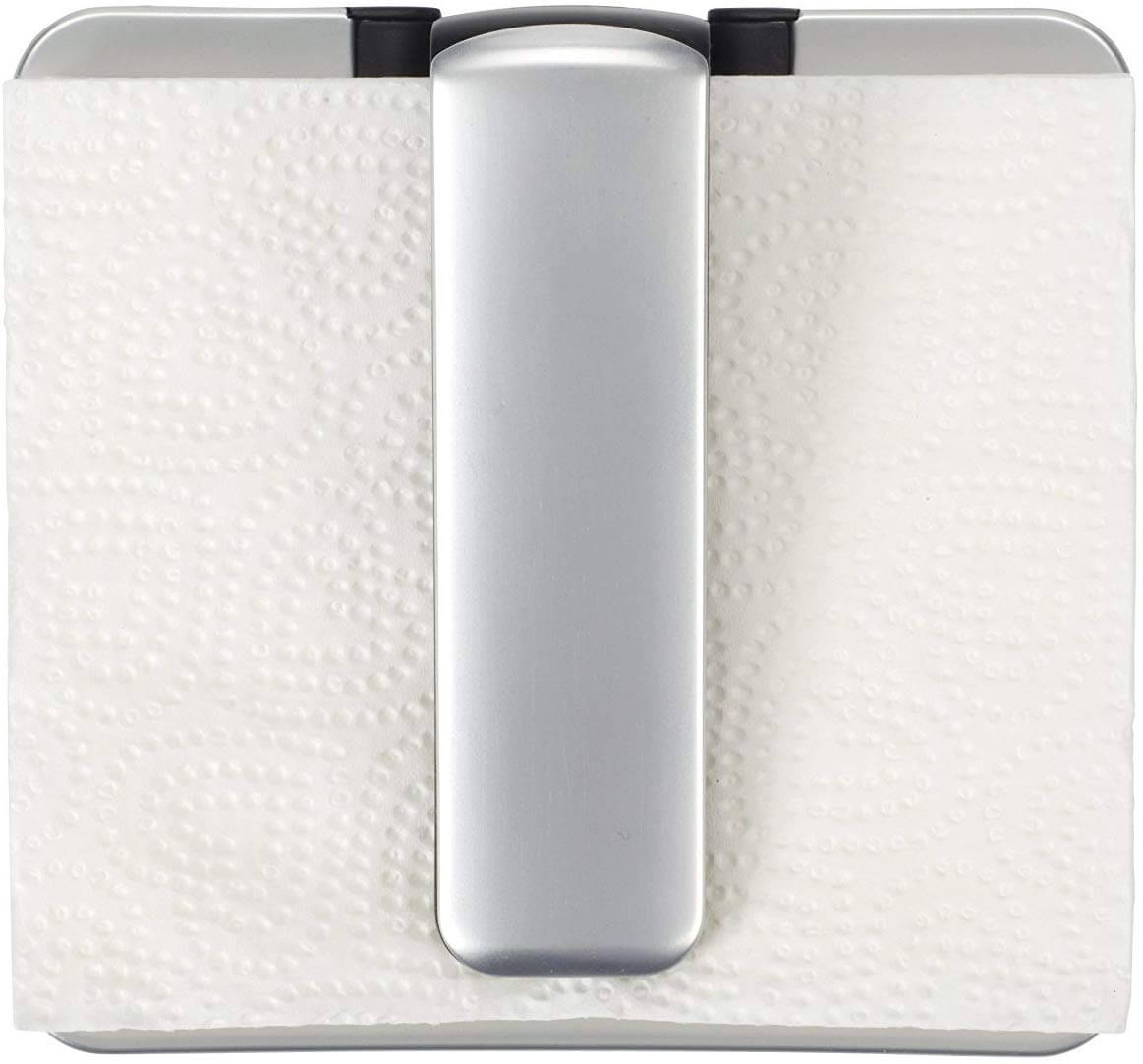 The OXO Good Grips SimplyPull napkin holder has a rubber grip weighted arm to hold napkins in place against its weighted base. The arm also opens wide and stays open for easy refilling and it can be folded flat into the base for storage.

This holder has a wider base to accommodate a range of napkin sizes and the base is also non-skid. Made from stainless steel and ABS plastic, it measures 6¾" long by 6¼" wide and 3" high. It also comes with a lifetime limited warranty from the manufacturer.

Some buyers have not been happy with the quality of this holder and you may find it on the bulky side; especially as this is a horizontal rather than a vertical holder. Its finish can also mean it is prone to finger marks and other spot stains.

The MyGift torched wood napkin holder is a horizontal holder with a rustic wood finish. This has a center weighted bar to keep napkins in place and also has rubber feet on the base to prevent it from scratching. This can hold 50 plus standard square lunch napkins. This is not a solid wood holder, as some buyers have thought, and this also means it may not be as sturdy for outdoor use when windy. 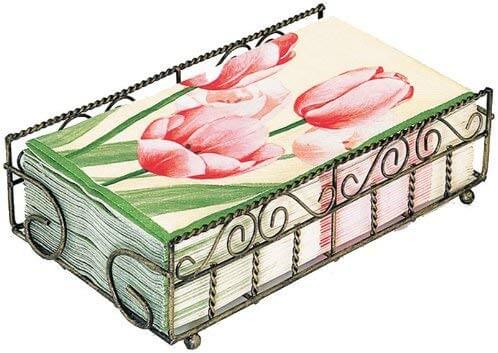 The Boston International napkin holder (BID12) is a horizontal holder which will take standard 8⅕" by 4½" guest towels or buffet napkins. This is made from steel and has a traditional garden gate design with an antique brass finish. This napkin holder does not have a weighted arm or pivot to prevent the napkins from blowing away if used outside and neither do the metal feet have any covers to prevent them from scratching the surface of the table or countertop. 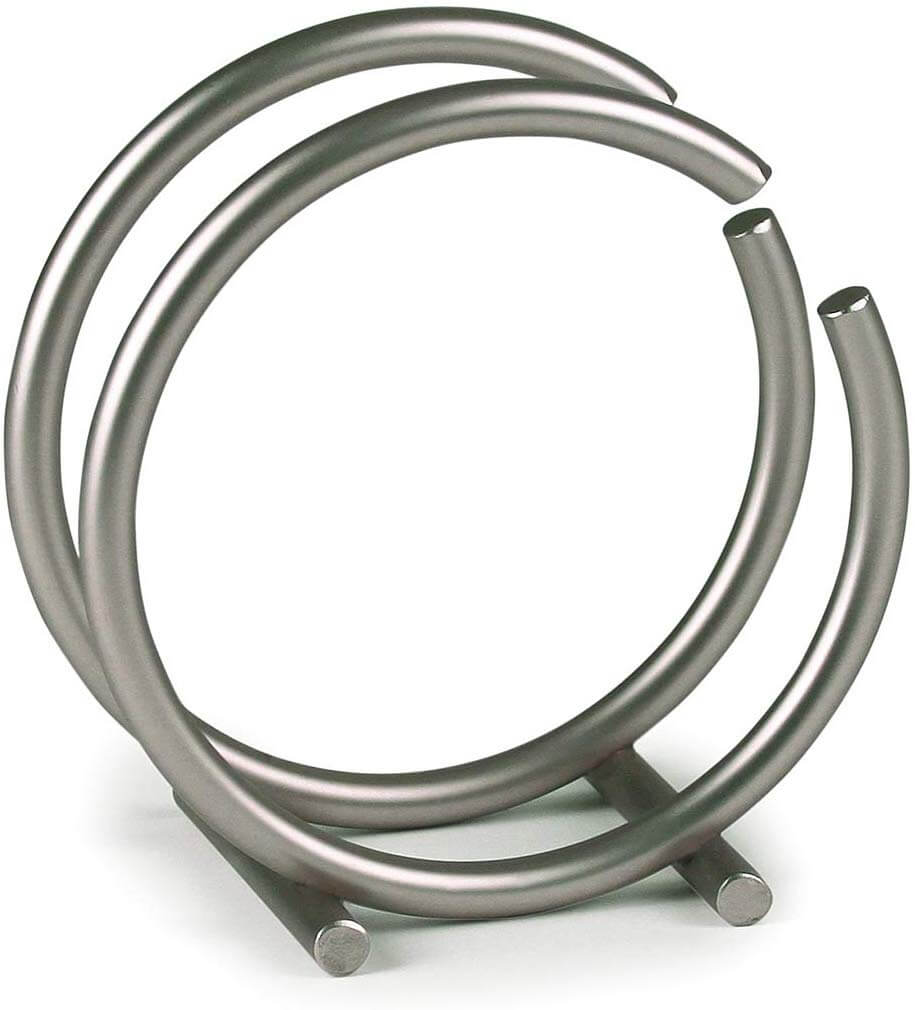 The circular and vertical Spectrum Diversified Euro napkin holder will hold standard sized napkins upright. Made from steel, this contemporary holder has a satin nickel finish and measures 3½" long by 5½" wide by 5½" high. Its design means it better suits storage of medium to larger sized napkins and the metal work on this may not be as good quality as you would expect. You may also find that you will have keep it well stocked to prevent napkins from falling out as they are used. 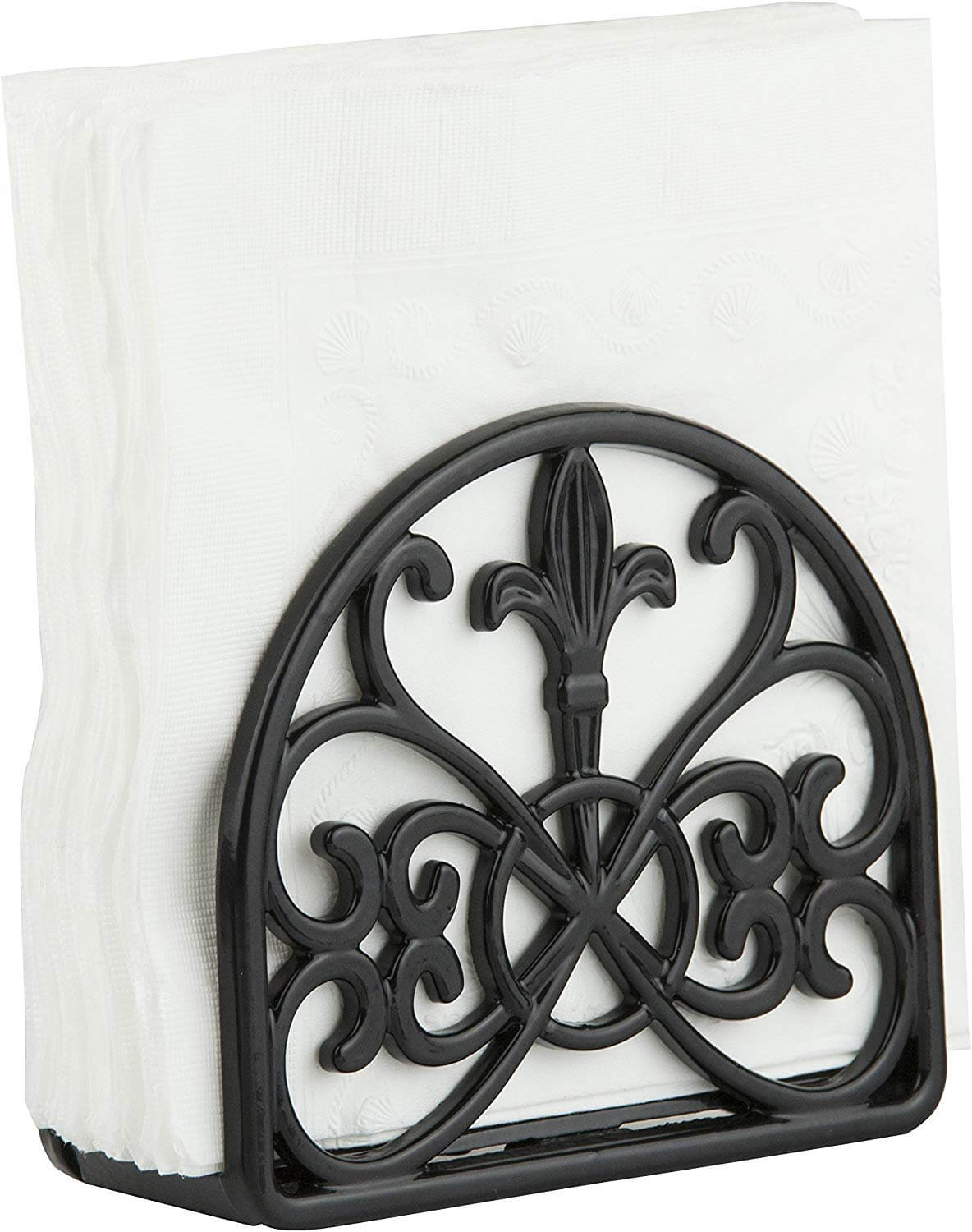 With a traditional Fleur de Lis design, the Home Basics cast iron napkin holder is a freestanding holder made from cast iron that is durable enamel coated. This black napkin holder is a vertical holder and measures approximately 5⅝" high by 2" wide and 5" long. It also has rubber feet to prevent any damage to your table or countertop. Some buyers have received this damaged and it will not hold as many napkins as other designs of napkin holder. 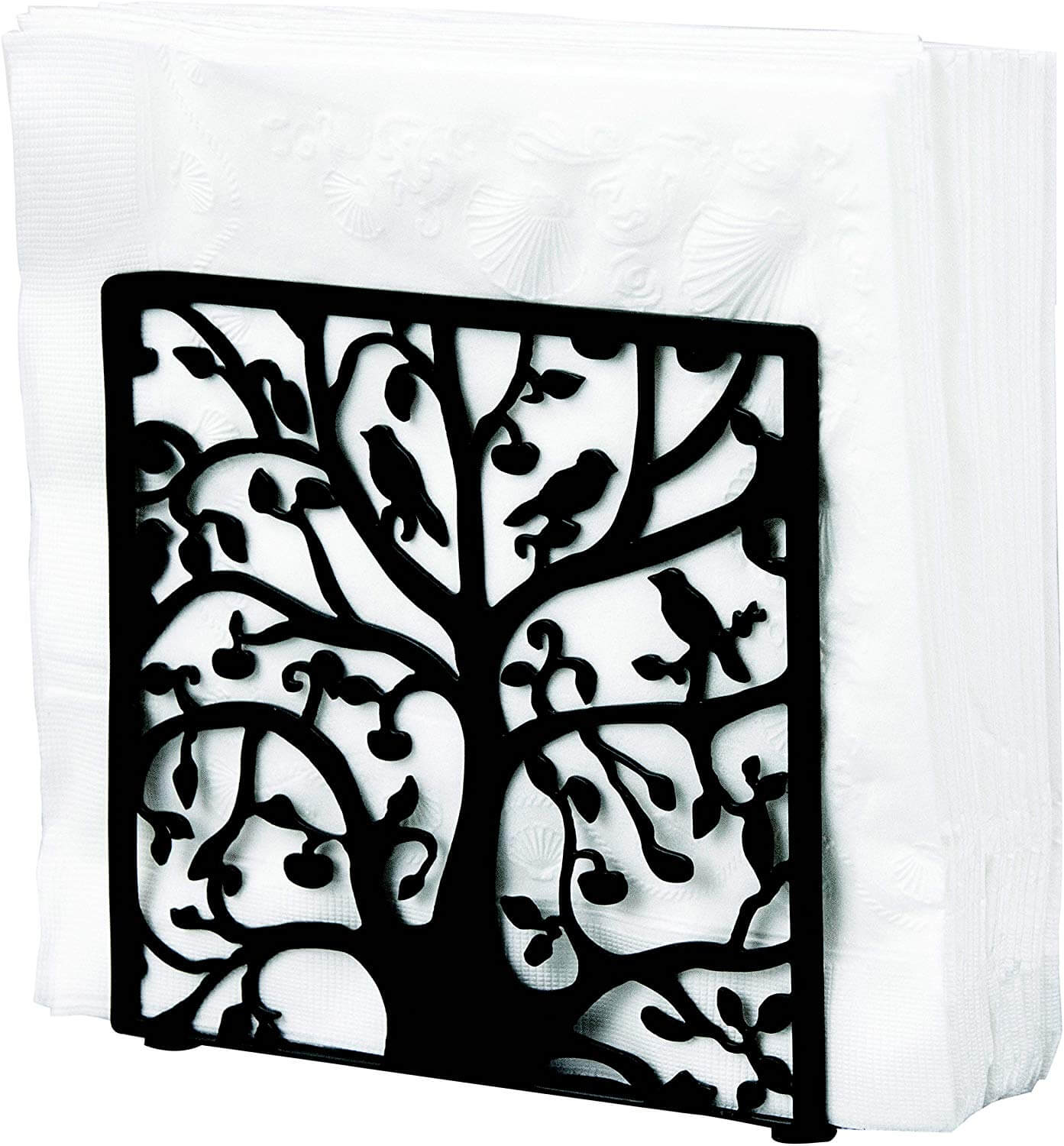 The vertical standing MyGift Tree & Bird napkin holder is made from steel and has a cut out design of a tree with birds in the branches. Measuring 5" long by 5¼" inches high and 2" deep, the base of this holder has rubber pads to prevent any damage to the table.

This will fit larger dinner napkins; although they will overhang the edges slightly. This is a lighter weight napkin holder and because of its design, you may find that you will bend it accidently when adding or taking away napkins. 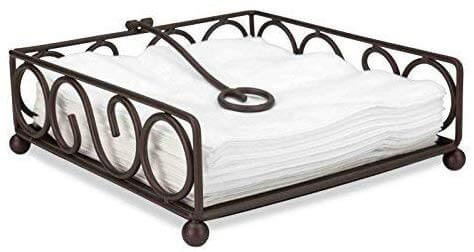 The horizontal Home Basics scroll napkin holder is made from heavy duty steel and has a bronze colored finish. This has a weighted pivot arm to keep napkins in place and it also has rounded metal feet to stop the napkins from soaking up table spills. This is a 7½" square holder that stands 2½" high.

This does not contain any rubber protectors to stop it from scratching surfaces and some owners have found that this does not sit as flat on a surface as it should do which can make it wobble. 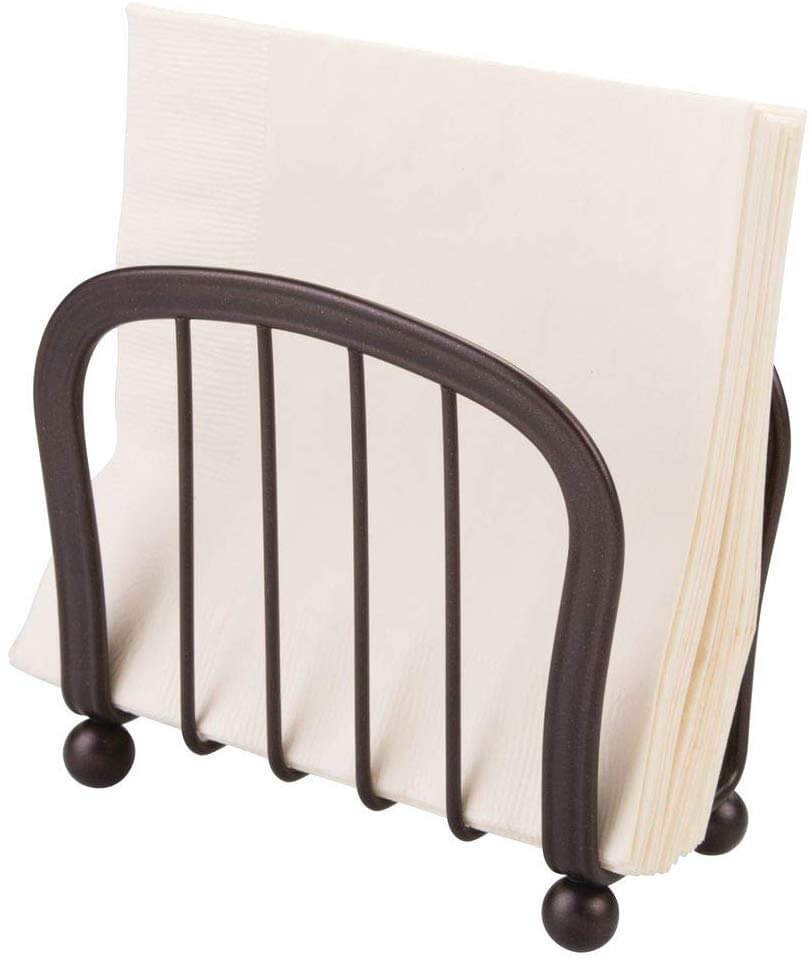 The mDesign decorative napkin holder is a vertical holder measuring 6" long, 5½" high and 3" deep. Made from strong steel wire, this has a durable and rust-resistant finish. This has ball feet to keep napkins out of spills but unfortunately these do not have rubber protectors on them.

As a larger napkin holder, not all buyers have been as keen on its size, and as the holder empties, the napkins will begin to fold over as there is no arm or weight to keep them in place.

Things to Consider Before Buying A Napkin Holder

The second style of holder is one that has walls all around it and holds napkins flat – a typical horizontal holder - and the base of this will usually be sized for standard napkins, typically lunch napkins.

Horizontal napkins holders often have a weighted base and have a weight or an arm to hold the napkins in place and make it easier to take one napkin at a time. This type of design is also good for outdoor dining as napkins are less likely to blow away on windy days.

The typical napkin dispensers seen in diners are also classed as napkin holders, but a napkin dispenser is usually always a metal case that allows to you to take just one napkin at a time from the front or top of the dispenser.

Cloth napkins have been around since Roman and Greek times and napkin holders and napkin rings made from wrought iron were commonly found in the nineteenth century. Napkin rings became popular in the early 1800s as a way for wealthy French families to show off their wealth by using silver, bone, porcelain and even pearl decorated napkin rings at the dining table.

The historical napkin holder was also a small device that was designed to hold a cloth napkin in a button hole or top of a necktie knot. Often made from silver these types of napkin holders were in use in at least Edwardian times.

When the Scott Paper Company invented and began to manufacture paper napkins from 1930 onwards, the popularity of the napkin holder began to increase along with the demand for the paper napkins.

By the 1950s and alongside the increased use of materials such as plastics, the napkin holder was a budget friendly and key accessory for homes. This demand for the maintenance-free paper napkins which were also cost-effective (due to the low costs of producing paper) had also contributed to the decline in use of traditional cloth napkins.

When choosing a napkin holder, you should not just consider its function, but also its form. There are many different styles of napkin holders and look for one which will suit the design of the space in which you want to place the holder.

Napkin holders are also ideal for other roles in the home. They can be used as mail or document racks, as a holder for scrap paper, as racks for saucepan lids, or even in the kitchen cabinet for storing packets of seasonings in!

There is some variation between the sizes of cloth and paper napkins. For economy, and because they are only single use, paper napkins are usually smaller than cloth napkins. Typically, there are three sizes of paper napkin available; beverage, luncheon and dinner.

A beverage or cocktail napkin is usually around 5" square when folded and a standard lunch paper napkin is a 13" napkin folded into a 6¾" square. Lunch napkins tend to be one of the most popular sizes and usually available in varying thicknesses of 1, 2 or 3 ply.

Dinner napkins are larger than lunch napkins, usually around 16" to 18" unfolded or around 8½" when folded square. Guest towels also fit into this category of paper napkin.

Although the basic job of any napkin – paper or cloth – is to blot your mouth and wipe your fingers, there are still a few ‘do’s and don’ts’ when using a napkin!

You should only unfold and place your napkin on your lap after your host has placed theirs. If you need to leave the table at any point during the meal, then your napkin should be placed on your chair after you have got up.

After you have finished your meal, then your napkin should be loosely folded and placed to the left side of your plate. If your plate has been cleared, you can instead pop it in the center of your place setting.

In this article we have taken a look at the advantages of the two main types of napkin holder – vertical and horizontal - as well as what you should consider when selecting a new napkin holder for your home. We also offered some guidance around sizing of paper napkins and some of the basic etiquette, or ‘do’s and don’ts’ of using napkins.

We trust that you have found this article entertaining and that our reviews have helped you to select the best napkin holder for all of your household’s entertaining needs, whether you need paper napkins for breakfasts on the go, lazy family brunches or informal dinners with friends!
5 / 5 ( 10 votes )