If you have limited practice as a bartender, or just don’t have the time to spend squeezing fresh limes, then using a margarita mix is a simple way to enjoy this ever-popular drink. Margarita mixes come in various forms. They may be frozen, dry or bottled mixes, as well as mixes that specifically for frozen margaritas or slush.

In this article we look at how to get the most from the best margarita mix as well as reviewing some of the liquor-free current bestsellers. These enable you to add your own tequila and triple sec, or even just water to serve up a virgin margarita.

Ready to just add liquor, freeze and squeeze, Lt. Blender’s Margarita in a Bag (3 Pack of 12 oz Pouches) is our budget pick for a frozen margarita.

Sweetened with sucralose, rather than aspartame or stevia, for a better aftertaste, Baja Bob’s Original sugar free margarita mix (32 fl oz) contains just 10 calories per serving. Easy to add to liquor and ice, this low carb, traditional lime-flavored mix is also ideal for various diets including keto. It is also gluten free. Not all drinkers are keen on the flavor of this, and some consider that it is a little sour when compared to a standard margarita mix.

2. Lt. Blender’s Margarita in a Bag

To serve Lt. Blender’s Margarita in a Bag (3 pack of 12 oz pouches), you need to add water and liquor to the pouch, freeze and squeeze. This margarita mix contains lime, lemon and orange juices and it is also suitable for use with just water. The back of the pouch gives directions on where to fill to. There can be inconsistencies with freezing, and if left in the freezer too long it can end up as solid ice, although a few minutes under the warm tap may help thaw it slightly.

The Margarita Frusheez slush mix (0.5 gallon) is suitable for making slush with or without liquor. One part of this concentrated slush mix should be added to four parts of water. You may need to experiment with your slush machine, as you may need to adjust the amount of water, especially if adding liquor. As this is a sweeter mix, it is probably better served with ice. 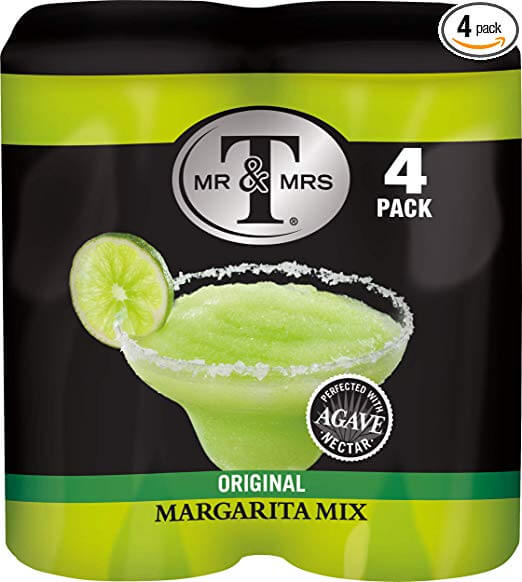 In 5.5. fl oz cans, the ideal for size for single drink servings, the Mr & Mrs margarita mix is lime flavored with a squeeze of orange and an agave nectar sweet finish. Some drinkers have found that this mix is too sweet, and this sweetness may make it unsuitable as a virgin margarita.

For a traditional margarita, one can needs adding to your ice, tequila and triple sec and then finishing with lime and a salted rim. These cans have quite a short expiration date, so you may want to check on arrival that they are in date before you use them.

The Margarita Texas mix lime (32 fl oz) is an award winning mix free from high fructose corn syrup. With a ‘made from scratch’ taste, this also includes agave nectar for sweetness. This lime-flavored mix can be served on the rocks or frozen, but it does contain sulfites which may not be suitable for those who are sensitive to them.

The small batch made Dr Swami & Bone Daddy’s Top Shelf margarita mix (33.8 fl oz) contains citrus juice and proprietary non-alcoholic triple sec. Free from artificial flavors, it also comes with a satisfaction guarantee. This does contain grapefruit, so some of its sourness may come from this source rather than the expected lime. 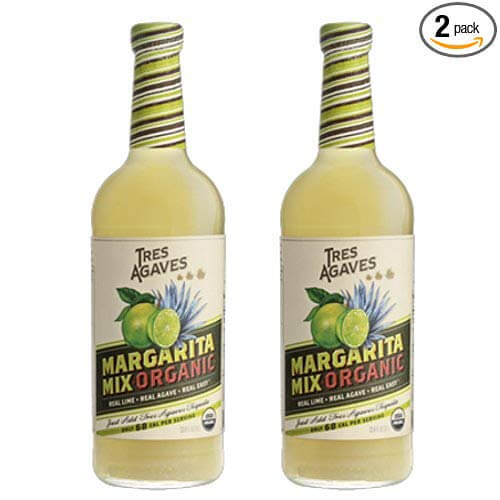 The USDA Certified Organic Tres Agaves organic margarita mix (33.8 fl oz) contains just 68 calories per serving. Made from all natural ingredients, it is sweetened with agave nectar rather than high fructose corn syrup. As a sweeter mix, you may want to add some extra lime to increase the sourness. Unfortunately, this mix comes in glass bottles, so there can be a risk of it breaking during shipping. 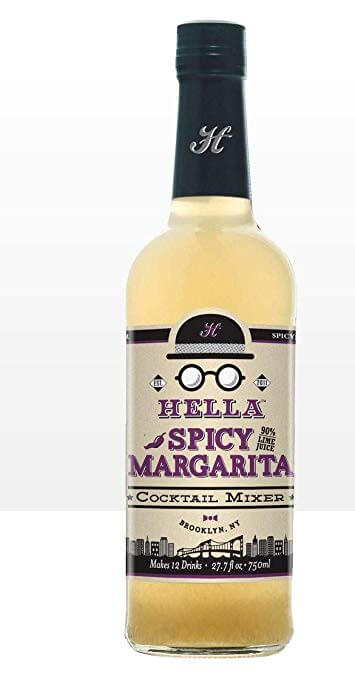 Made from lime and pure cane sugar, the Hella Cocktail Co. spicy margarita mix (25.36 fl oz) also contains ghost pepper extract. It is also free from any artificial colors or flavors and does not contain any high fructose corn syrup. This mix will need refrigerating once opened. 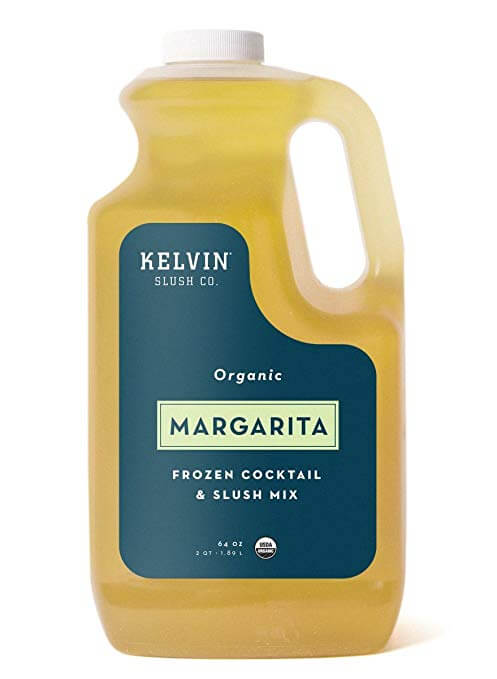 Made from non-GMO and USDA Certified Organic ingredients, the Kelvin Slush Co. organic margarita frozen cocktail and slush mix (64 fl oz) is a lime-based mix. This mix uses natural ingredients and is suitable for using in any slush machine or blender. It is also gluten free, vegan and kosher.

This margarita mix is better suited for parties or other larger drink requirements as it needs using within 10 days to keep it at its best. 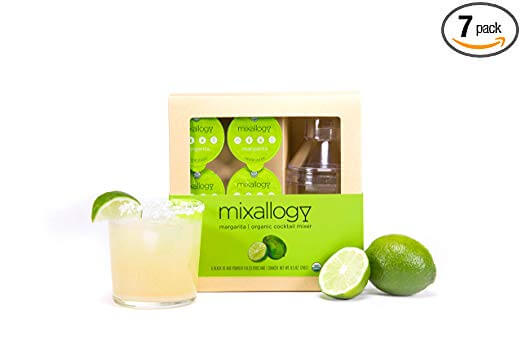 The Mixallogy margarita mix and mini shaker set (6 servings) has a margarita powder ready to mix with liquor and water. These low calorie mixes do not contain any added flavors or preservatives, are USDA Certified Organic and gluten free. As a mix, it may leave a slight chalky residue after drinking.

Things to Consider Before Buying a Margarita Mix

Margarita mixes are perfect for those who are less experienced at bartending, or even just as an easy solution for an on-demand margarita without needing to buy and squeeze limes.

It is always worth double checking the mix before using it, as although this review has looked at mixes without the liquor, some mixes do come ready to drink with liquor included.

Liquor-free mixes do offer a key advantage in that they allow you to use your own good quality liquor. Unfortunately, some liquor mixes can contain inferior tequila.

Mixes that are liquor-free are also ideal for making a virgin margarita, or ‘mocktail’. Instead of adding liquor, you can add more water and even some additional lime juice if required.

These margarita mixes usually have a long shelf life, but once open the taste may start to change slightly over a few months. It should still be safe to drink at this point though. If you have had an open bottle hanging around for some time, then check to see if it has a different odor, is discolored or there is any sediment in the bottle. If so, then you should pour it away.

By 2008, margaritas made up 18% of all mixed drink sales, making it the most commonly ordered drink in the US. Even today it remains one of the most popular drinks available and is even recognized on the 22nd February every year – also known as National Margarita Day!

The origins of the margarita are less clear. One story is that a Mexican restaurateur created the drink in 1938 for a Ziegfeld showgirl who was allergic to all liquor except tequila – but she was unable to drink it neat. Another is that an American socialite called Margaret Sames, known as Margarita, created the drink for her friends in the late 1940s.

The margarita is similar to a ‘daisy’ cocktail which was a mix of citrus, liquor and grenadine over ice in the 1930s and 40s. There were many variations of daisy cocktails, included a tequila daisy – tequila, orange liqueur (triple sec), lime juice and a splash of soda. A recipe for margarita, but under the name of Picador, was also found in a 1937 cocktail book.

By the 1950s, the electric blender was appearing in many kitchens, and these were soon being used to make daiquiris. A recipe for margarita appeared in a 1972 home blender recipe book.

In 1971, the first frozen margarita machine was invented after a Dallas restaurateur was struggling to create margaritas for his customers. After watching a Slurpee machine in action, he turned a soft-serve ice cream machine into a margarita dispenser. The prototype of this machine can still be seen in the Smithsonian’s National Museum of American History.

There are so many variations on the margarita, it would be impossible to include them all here. We do hope however, that most of you do agree with us that the traditional margarita is tequila, triple sec and lime juice, either poured over ice, or blended with ice and served in a glass with a salted rim and a lime wedge.

Whether you make fresh margaritas or use a mix, here are three things in common between the two that can really make the difference between a mundane and a magnificent margarita.

Using a good quality tequila is a must. Look for a medium to higher end blanco or reposado tequila. A tequila should always be 100% de agave or puro de agave. Any that say mixto or oro are mixed with a natural cane spirit.

The blanco, white or silver tequila is a clear, young tequila aged in oak for no longer than two months. It has a crisper and purer agave flavor.

A reposado is a tequila which has been aged in oak barrels for between two and 11 months. This allows it to take on a gold hue and it has a flavor balanced between the wood and agave. The reposado is also suitable for margaritas.

The añejo tequila is aged for between one and three years and an extra añejo will be aged for longer than three years. Although these tequilas have a number of qualities in their own right, their complex flavors are wasted when mixed with lime, triple sec and a salted rim, and thus should be avoided in margaritas.

You should also avoid using a gold tequila. This has usually had colors added to it as well as some caramel for sweetness or even other flavors. Gold tequilas are often used in bars for ‘mixed drinks’.

A tequila will also have a different taste depending on where it is produced in Mexico. Although all tequila comes from blue agave, different climates and soil alter its flavor, so it can be worth trying out different tequilas.

Triple Sec, curaçao or orange liquor has an alcohol content of between 15% and 30% and is made from the skins of oranges. Cointreau is a mix of bitter and sweet orange skins and this has a 40% alcohol content. There is little difference in flavor between the two.

Some drinkers may prefer to add Grand Marnier, although its brandy base can distract from the other flavors in the margarita.

Whichever one you prefer; the ratio should usually be around half the amount of tequila in the mix.

The salt on the rim of a margarita glass is important. Even just a small pinch is enough to bring out the important flavors while taking the edge off the bitterness. Salt is also able to intensify our aroma perception, which makes the flavor even more powerful.

Just avoid over-salting the rim as any excess will fall into the glass and alter the balance and flavor of the drink.

In this article we have had a look at how you can get the most from a margarita mix, including the addition of good quality tequila and the right amount of salt around the rim of the glass. If you have your silver tequila to hand, or want to make a virgin margarita, that we trust that our reviews of margarita mixes have been helpful.

As there are so many margarita mixes available, it does give you plenty of opportunity to try a wide variety of different types and flavors. This means that once you do find your best margarita mix you can enjoy it without having to spend 30 minutes preparing limes for a fresh margarita.
5 / 5 ( 17 votes )