Ginger beer has been around for centuries, but the increasing popularity of drinks such as the Moscow Mule have brought this spicy favorite back into the limelight. Ginger beer is also popular as a drink by itself, with many of us choosing this refreshing drink to obtain some of the many health benefits that ginger can offer.

Although ginger beer was originally alcoholic, most of today’s drinks are non-alcoholic. In this article we look at the origins of ginger beer and what benefits ginger gives to our health. We also consider the differences between ginger beer and ginger ale and review some of the best ginger beer currently available.

With three gingers and a spicy flavor, the 24 pack Fever-Tree premium ginger beer (6.8 fl. oz bottles) is our free from artificial flavors and preservatives best pick. 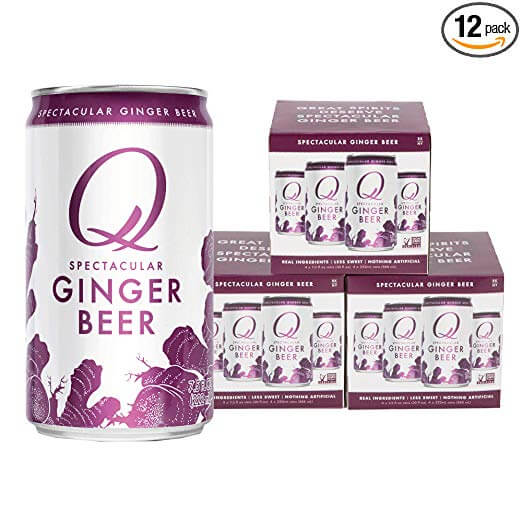 The US-made 12 pack Q ginger beer (7.5 fl. oz cans) with chili pepper and other extracts is our strong yet less spicy budget pick.

Made from spring water and a blend of gingers from Nigeria, Cochin and the Ivory Coast, the 24 pack Fever-Tree premium ginger beer (6.8 fl. oz bottles) is free from any artificial preservatives or flavorings. Suitable to drank on its own or use as a mixer, this is an alcohol-free ginger beer which is naturally brewed.

This does have a very spicy flavor so those who are not as accustomed to ginger beer may find it strong. Imported from the UK, this ginger beer does come in glass bottles so there can be a risk of some arriving damaged.

A spicy, less sweet and more carbonated ginger beer, the 12 pack Q ginger beer (7.5 fl. oz cans) is for use as a mixer only. Made in the US, this alcohol-free ginger beer is sweetened with organic agave rather than sugar and contains chili pepper, coriander, cardamom and lime extracts, all of which add to a strong and very spicy flavor which may not be to everyone’s taste. 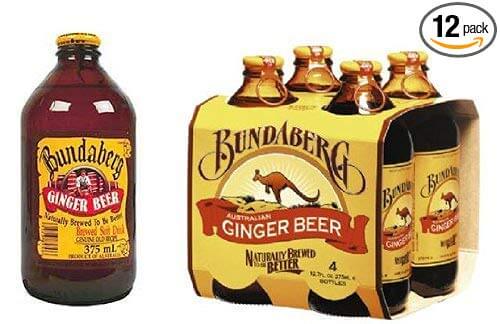 Made in Australia, the 12 pack Bundaberg Australian ginger beer (12.68 fl. oz) has a smooth and distinctive taste - which may not be popular with all ginger beer fans. This alcohol-free ginger beer is double distilled and then aged before being bottled. This may be sweeter and contain more sugar than some comparable ginger beers. The bottles are glass with a pull off tab which means they cannot be resealed once open. 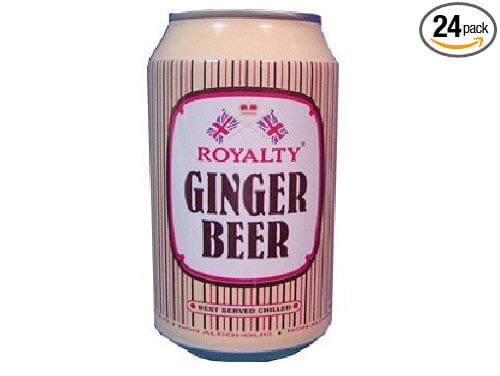 Imported from the UK, the 24 pack Royalty ginger beer drink (10.1 fl. oz cans) is an alcohol-free ginger beer. Although quite strong tasting, some drinkers may find this ginger beer is too sweet, which means it may be better used as a mixer where the sweetness can be ‘cut through’. There is also a risk of some of the cans being damaged in transit. 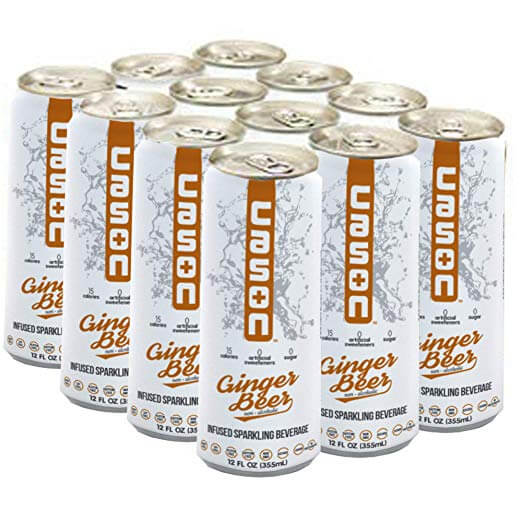 The 12 pack Cason Beverage infused ginger beer (12 fl. oz cans) contains ginger, milk thistle, potassium, prickly pear, dandelion root and decaf green tea, all of which give a different flavor from a traditional ginger beer. This means it may not always be suitable as a mixer.

It is free from alcohol, caffeine, preservatives, soy, gluten and dairy. Each can is 15 calories and zero fat. Some may find this ginger beer a little sweet although it is sweetened artificially rather than with sugar. This US-made ginger beer is also kosher and non-GMO and comes with a satisfaction guarantee.

A ginger ale with a crisp and clean flavor, the eight pack Fever-Tree premium ginger ale (16.9 fl. oz bottles) is made with spring water and three gingers. This alcohol-free ale also contains botanicals and cane sugar. As a ginger ale this will have a lighter flavor than a ginger beer. 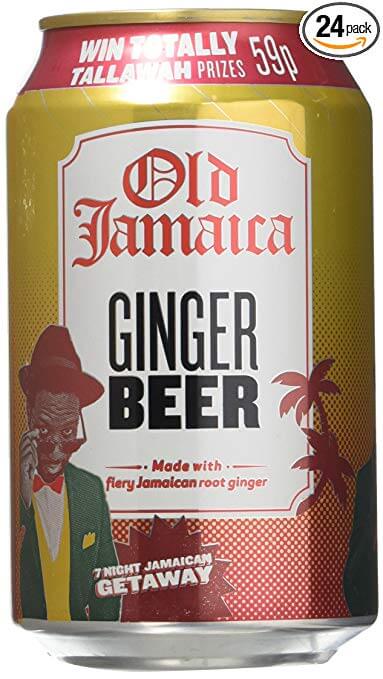 A refreshing, strong and crisp alcohol-free ginger beer, the 24 pack of Old Jamaica ginger beer (11.6 fl. oz cans) is made from Jamaican ginger root. This ginger beer was originally produced by the company in Jamaica in 1908 and then made its way to the UK in 1988 where it soon became the number one ginger beer. This is suitable to drink either in its own or as a mixer. Some drinkers consider this sweeter than other ginger beers. 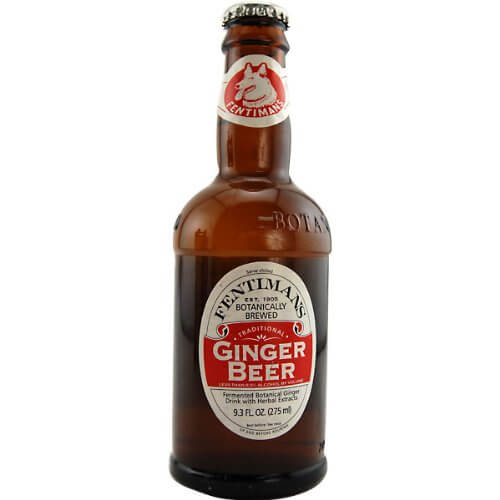 Botanically brewed with all natural ingredients, the four pack of Fentimans ginger beer (9.3 fl. oz bottles) takes its ginger flavor from fermented ginger root. This gives the beer its ‘tickle and burn’. This ginger beer also contains juniper, yarrow extract, juniper, capsicum, lemon and pear juice concentrate. These are small bottles and can work out quite expensive when compared with other ginger beers.

The non-alcoholic 24 pack Bruce Cost ginger beer (8.4 fl. oz cans) is an unfiltered ginger beer made from pure fresh ginger and cane sugar. As it also contains pieces of ginger in it, the cans will need shaking gently before drinking. Made in the US, this ginger beer is suitable for using as a mixer or drinking on its own. Some drinkers consider that this is a little too sweet and that there can be a difference in taste between the cans and the Bruce Cost bottled ginger ale. It is also lower in carbonation. 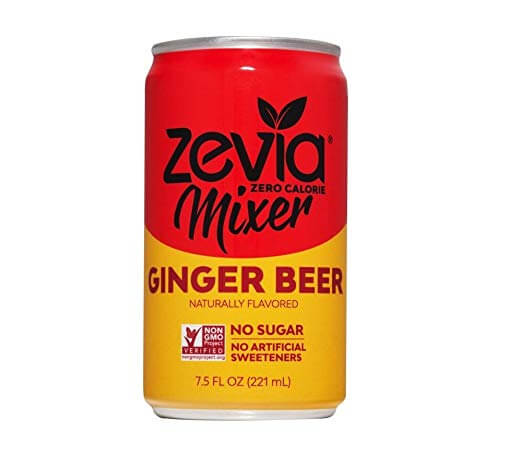 Suitable for use as a mixer or on its own, the 12 pack Zevia Zero-Calorie Mixer ginger beer (7.5 fl. Oz cans) is ginger with a citrus hint. As well as zero calorie, this ginger beer is also zero sugar and free from artificial sweeteners. It is also Non-GMO project verified, kosher, gluten free and vegan.

Some drinkers may find that this ginger beer lacks depth of ginger flavor and although it has lower carbonation, its taste may be more of a lighter ginger ale than a beer. Some have also commented on the sweetness of this ginger beer and that it does leave an aftertaste when drinking.

Ginger is an old spice which was used as a tonic for many ailments by a number of civilizations, including the Ancient Chinese and Indians. There is reference to ginger being taken for health in ancient Chinese, Sanskrit, Greek, Roman and Arabic texts.

Ginger was brought to the world from southeast Asia by the Romans in the first century. After the fall of the Roman Empire in 410, the Middle East began to control the trading of ginger. This monopoly, along with the scarcity of ginger, and greater demand for it, forced the price to rise considerably. Ginger was probably introduced to Africa and the Caribbean in or around the 15th century where it was then cultivated.

Ginger does not exist as a wild plant, it has been cultivated for thousands of years and grows best in warmer climates. India is still the main source of ginger; producing 34% of the 3.3 million tons that were produced in 2016. China, Nigeria and Indonesia are also serious producers.

Ginger beer was first made as a fermented alcoholic drink from ginger, water, sugar and the starter culture known as ginger beer plant (GBP) or ‘bees wine’. This ‘plant’ was a mix of a fungus, Saccharomyces florentinus yeast and Lactobacillus hilgardii bacterium. These clumped together and allow ginger beer to ferment. Ginger Beer Plant is hard to source nowadays – probably as it was lost during Second World War rationing. Many recipes for ginger beer now use brewer’s yeast in place of the Ginger Beer Plant.

Appearing in England in the mid-18th Century, ginger beer was also exported to the US and elsewhere in earthenware bottles. Over time, other spices were added to the ginger beer and by 1855, its alcohol content had been limited to 2% by excise laws.

Although ginger beer continued to be produced from this time, it did fall from popularity. However, thanks to drinks such as Dark and Stormy and the Moscow Mule, ginger beer is a staple drink once again.

The Difference Between Ginger Beer and Ginger Ale

Ginger beer is made before fermentation completes. This gives it a strong ginger and spicy flavor and carbonation. Most ginger beers today are categorized as non-alcoholic because they meet the FDA requirements of an alcohol content of less than 0.5%

If a ginger beer is cloudy, or unfiltered, the bottle or can will need a gentle shake or inversion before pouring.

Ginger ale is usually sweeter, and the ginger flavor is mellow. Ales are often made with carbonated water, ginger essence and other flavorings. Probably invented in the mid-19th century in Ireland, Vernor’s Ginger Ale was actually the first soda made in the US in 1866. James Vernor sold it in his Michigan drug store for 30 years until he opened a factory to make it on a larger scale. The modern ginger ale evolved in 1907 when the Canadian, John McLaughlin, invented what became known as Canada Dry.

Ginger is related to the cardamom and turmeric plants and is a flowering plant. It is the root or rhizome of ginger, usually just known as ginger, which is most common as a spice. The main compound in ginger that gives health benefits is gingerol. Ginger also contains iron, vitamins B6 and C, potassium, phosphorous, magnesium, zinc, folate, niacin and riboflavin.

Ginger can be helpful with nausea and is still a popular home remedy for motion sickness. Research has shown it can also relieve the nausea symptoms of morning sickness during pregnancy, although it has no impact on level of vomiting. Those who suffer with chronic indigestion may also find some relief with ginger as it can help speed up stomach emptying.

There may also be some benefits of ginger for our musculoskeletal system. A trial of 247 people with osteoarthritis in their knee who took ginger extract needed less pain medication as they had lower levels of pain. Ginger may also help to reduce muscle pain, especially after exercise.

Ginger could help reduce the risk of heart disease as a small study showed that a small ginger powder supplement was able to reduce a marker for oxidized lipoproteins – a major risk factor for heart disease. Ginger may also be able to help reduce higher levels of ‘bad’ cholesterol (LDL) which also contributes to heart disease risk.

Ginger is on the FDA’s Generally Recognized As Safe (GRAS) list and when consumed in reasonable quantities, ginger is safe and has few side effects. Some people can experience mild side effects from consuming ginger, such as heartburn, abdominal discomfort and gas.

Individuals who have gallstone disease may need to be careful with ginger as it can increase bile flow in the body. Although research has yet to confirm which medications ginger interacts with, there is some agreement that it may interact with anticoagulants and affect their action in the body.

Studies in pregnancy have not identified any harm from taking ginger, and indeed it may be useful to alleviate nausea symptoms, but if you are pregnant you should speak to your health care provider before taking ginger.

If you like to sit down with an occasional Moscow Mule in an evening, or even just a bottle of refreshing ginger beer, we hope that you have enjoyed this in-depth article on ginger beer. Ginger was known to promote health in ancient times and today, scientists have been able to confirm some of what these civilizations knew back then.

We also hope that our reviews of some of the best ginger beer (and just a few ginger ales) will help you to make the right choice for your glass. Whether you are looking for strong and spicy, a sweet brew or one that is low sugar or calorie; there is a ginger beer available to suit all taste buds and budgets.
5 / 5 ( 15 votes )