Coconut milk not only helps make a perfect Thai green curry, it is also a great plant-based dairy substitute for those unable to consume dairy products. It is also incredibly versatile and can be used in many recipes and even added to drinks straight out of the can or carton. Coconut milk is traditionally canned although the increasing popularity of coconut milks means that many are now available as shelf stable cartons.

Some coconut milks are classed as beverages and can contain added sugars or flavors, and these may also be fortified with essential vitamins and minerals. Other coconut milks are unsweetened, often just containing coconut and purified water. In this article we help you navigate your way through the best coconut milk available, as well as considering its nutritional value and whether coconut may help to promote heart health by lowering our cholesterol. 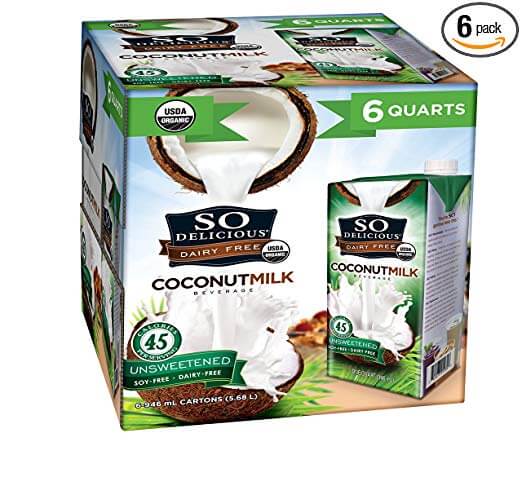 The organic and non-GMO So Delicious coconut milk beverage (unsweetened) is our US-manufactured best pick of the coconut milks. 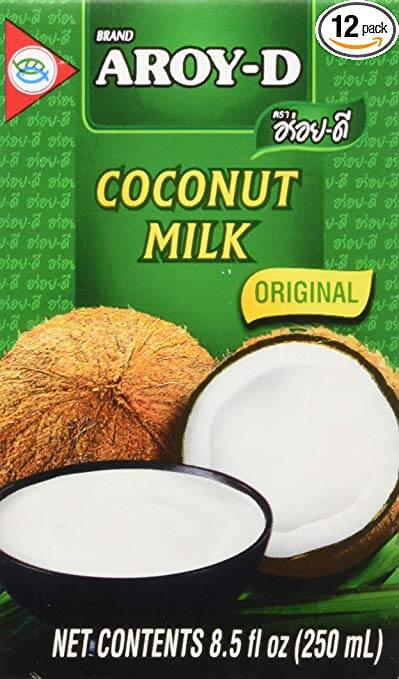 Naturally free from dairy and soy, the So Delicious coconut milk beverage (unsweetened) is certified USDA organic. Made in the US, this is also kosher, certified vegan, gluten free and Non-GMO Project Verified. It is ideal as a dairy-free substitute in drinks, on cereals and in recipes.

This coconut milk comes as a six pack of 32 fl. oz cartons and it is fortified with calcium, vitamin D, folate, vitamin B12, magnesium and selenium. This milk is shelf stable and will keep in the refrigerator for up to 10 days after opening. Although unsweetened, this does contain gums and there can be a risk of damage to the cartons during shipping.

Produced in Thailand, the Aroy-D coconut milk original comes as a 12 case of 8.5 fl. oz BPA-free cartons. Containing pure coconut milk, this is naturally gluten, soy and dairy free. This is also undiluted and free from any thickeners or stabilizers.

As this coconut milk is supplied in cartons there can be a risk of damage to the cartons and some recent buyers consider that this may not be the same quality as that which they had purchased previously. It may also be oilier than other coconut milks.

The certified USDA Native Forest organic coconut milk (simple) contains just coconut and purified water. Coming as a 12 case of 13.5 fl. oz cans, this coconut milk is free from any gums or thickeners. This coconut milk is produced by pressing coconuts and then water is added to this oil rich extract. The coconuts are ethically and organically sourced in Sri Lanka.

These cans can be prone to damage during shipping and some have found the texture of this can be different and a lot more watery than other coconut milks -even those without added gums. 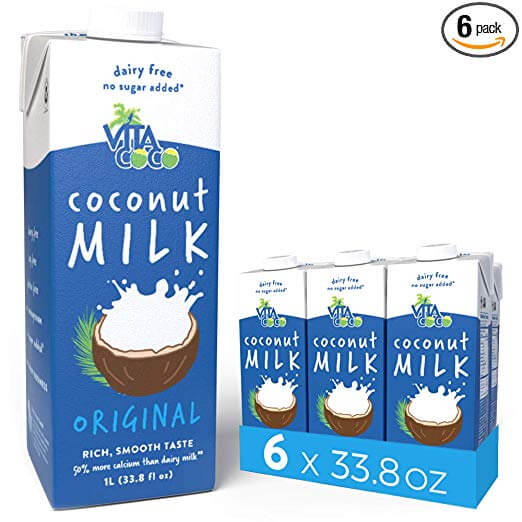 Free from added sugar and carrageenan, the Vita Coco coconut milk (original) comes as a six pack of 33.8 fl. oz cartons. This is made with a blend of coconut water concentrates, water and coconut cream. It also contains cellulose gel and gum as stabilizers.

Some have found that this coconut milk can go rancid faster than other milks and it can be prone to leaking. It may also have less coconut flavor than expected and can be quite watery.

The non-GMO Marion’s Kitchen premium coconut milk comes as a 12 case of 7 oz BPA-free packs. Produced in Thailand, this is shelf stable but will keep for only three days in the refrigerator once opened. This also contains guar gum as a thickener. This is an unsweetened milk suitable for drinking or using in recipes. This milk can also cost more than other brands of coconut milk. 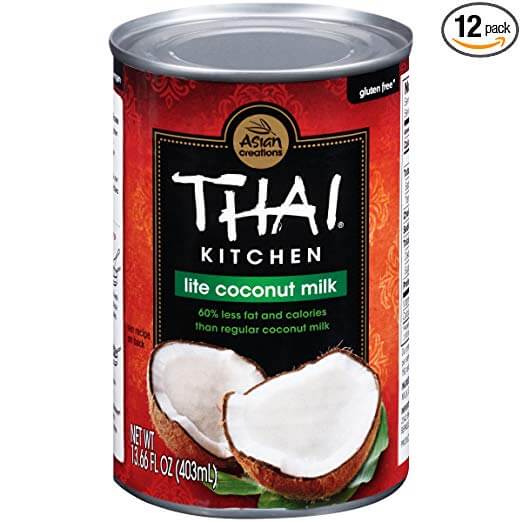 The Thai Kitchen lite coconut milk comes as a 12 pack of 13.66 fl. oz cans, is non-GMO and naturally gluten and dairy free. As a lighter coconut milk, this has 60% fewer calories and less fat than a traditional coconut milk. Suitable for cooking with, this coconut milk contains water, coconut milk and guar gum. It is also unsweetened and free from preservatives.

Some buyers consider this coconut milk lacks flavor and there is risk that the cans arrive severely dented. The cans are not currently BPA free. 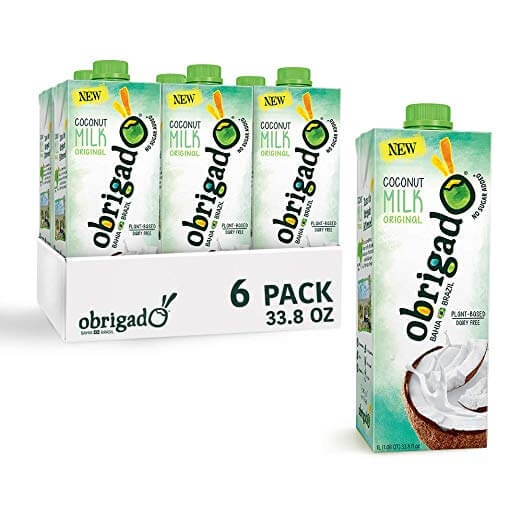 The not from concentrate Obrigado coconut milk comes as a six pack of 33.8 fl. oz cartons. Produced in Brazil, this is a blend of coconut water, coconut cream and natural coconut flavor. It does not contain any carrageenan. This is shelf stable but will only keep for three days in the refrigerator once opened.

This Non-GMO Project Verified coconut milk is also made by a certified B Corporation. Some consider that although this coconut milk does contain thickening gums it does have a watery consistency. The cartons can also be at risk of being damaged. 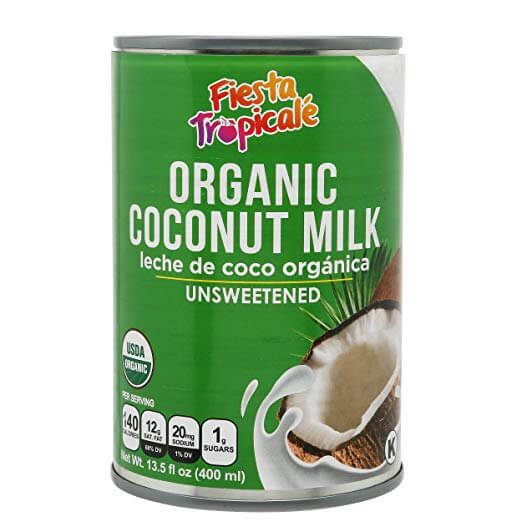 The Fiesta Tropicale organic coconut milk (unsweetened) is cold-pressed from Thai USDA certified organic coconuts and packed in the US. Free from any added sugars, this six pack of 13.5 fl. oz cans are free from BPA and once opened will need refrigerating and using within two days. Made with coconut and purified water, this milk also contains organic guar gum.

These cans can be quite damaged on arrival and a small number of buyers consider that recent batches are not as creamy as previous batches. There has also been some confusion as to whether this particular milk is suitable for yogurt making.

Coconut milk has a rich and creamy texture and comes from the white flesh of mature coconuts. Popular in a number of cuisines and countries, coconut is naturally dairy, lactose, gluten and soy free. Coconut milk can be used as a dairy milk substitute in drinks, in oatmeal or on cereals and it can also be used as a base for soups and curries.

Unlike coconut water, coconut milk does not naturally occur in the coconut. Coconut milk is manufactured and contains around 50% water. Coconut milk can be thick or thin, depending on its consistency and how it is processed.

Traditionally, the thinner milk is usually used for thin sauces and in soups, and many of today’s coconut milk beverages are thinner in consistency to resemble dairy milk. Thicker coconut milk better suits thicker sauces and desserts. Most commercial coconut milks contain a combination of thick and thin milks.

Tinned or other shelf stable coconut milks will often separate in storage and the coconut cream float to the top. When this happens, it indicates that the milk has not been treated with stabilizers or emulsifiers and this separation can easily be resolved by either shaking the can or giving it a good stir.

For a pure coconut milk, look for one which only contains coconut and water. If you are buying unsweetened, then carton coconut milk can often contain less calories and fat than a canned option, or you can look for a lighter coconut milk which will be thinner but contain less fat and calories.

Coconut milks may sometimes be fortified with calcium, vitamin D and other vitamins and minerals which can be helpful for those who may struggle to obtain these nutrients from elsewhere in their diet. If a coconut milk is sweetened it will contain added sugars which increases its calorie content as well as its sugar content.

Some milks also contain thickeners such as carrageenan or gums and those which are shelf stable will usually contain preservatives.

Coconut milk is rich in calories and about 93% of these calories come from fats, some of which are saturated. Saturated fats (which break down into fatty acids) differ chemically depending on how many carbon atoms they have, and different foods have different concentrations of the different saturated fatty acids. The fats in foods such as beef and chocolate are dominated with palmitic acid while coconut contains mainly lauric acid and myristic acid with lower quantities of palmitic acid.

These coconut fats include a type of saturated fat known as medium-chain triglycerides (MCTs). These MCTs go directly to the liver from the digestive system where they are used to make energy or ketones rather than being stored as fat in the body.

MCTS may work to reduce body weight and waist size. MCTs may also increase the body’s sensitivity to insulin which could help promote weight loss. They may help decrease calorie intake, boost calorie burning and reduce appetite when compared to other types of fat. One small research study showed that overweight men who consumed 20 grams of MCT oil at breakfast ate 272 less calories at lunchtime compared to the men who consumed corn oil at breakfast.

To date, there has been little research around MCTs and in particular MCTs from coconut sources and it is important to note though that coconut milk does only contain small amounts of MCTs, by increasing consumption of coconut milk to increase MCT intake, this will also increase overall saturated fat and calorie intake.

One cup of canned unsweetened coconut milk will contain around 445 calories, 4.57 grams of protein and 48.21 grams of fat. It also contains around 7.46 milligrams of iron and 2.30 milligrams of vitamin C.

Side Effects from Consuming Coconut Milk

With the exception of weight gain and other effects from consuming too much coconut milk in the daily diet, coconut milk in moderation is unlikely to cause any adverse effects unless someone develops an allergy to coconut. Although coconuts are listed as a tree nut by the FDA, they are not a tree nut and as such, allergies to coconut are rare.

Some experts do suggest though that those with FODMAP intolerances should limit coconut milk intake to no more than half a cup at a time - especially as coconut milk contains fermentable carbs which can cause digestive upset in those with irritable bowel syndrome (IBS).

Coconut is over 80% fat and although coconut milk does not contain as much fat as this, it is still fat-rich and often seen as an unhealthy choice for better heart health. However, as we have seen earlier in this article, coconut fats are different to typical saturated fats and they seem to work in a different way in the body.

Other studies have had similar findings of coconut oil or flakes improving LDL, HDL and/or triglyceride levels.

According to a review carried out in 2014, the MCTs in coconut milk may increase production of ketones which act as an energy source for the brain. This means that coconut milk may be able to boost mental performance, boost memory, slow cognitive decline and even restore brain function.

Other Possible Benefits of Coconut Milk

Other small studies using animals in the laboratory showed that coconut oil and coconut extract were able to reduce swelling and inflammation in injured animals. Another study using coconut milk showed a 54% reduction in the size of stomach ulcers in rats – the same result as using an anti-ulcer drug.

One specific fat in coconut milk - lauric acid - may act as an anti-microbial and in the laboratory, lauric acid can stop the growth of some bacteria and may also be able to inhibit endometrial and breast cancer cell growth.

In this article we have looked at some very early research into the possible benefits of coconut milk and although high in fat, it may be that the specific types of fat in coconut could provide some health benefits. Coconut milk should always be consumed in moderation as part of a healthy diet and lifestyle though, as it can cause weight gain and higher daily calorie intakes.

Coconut milk is available as pure and unsweetened coconut milk, or as a beverage which is often sweetened but also fortified with nutrients which some of us may not be able to easily obtain from specific diets. We do hope you have enjoyed reading this article, and that the information we have provided has helped take some of the guesswork out of choosing the best coconut milk for your dietary and lifestyle needs.
5 / 5 ( 13 votes )