If your recipe asks for beef consommé as the base for the dish, but your local store only has beef broth on the shelf, you are probably wondering if you can use broth instead as after all, they are both beef! 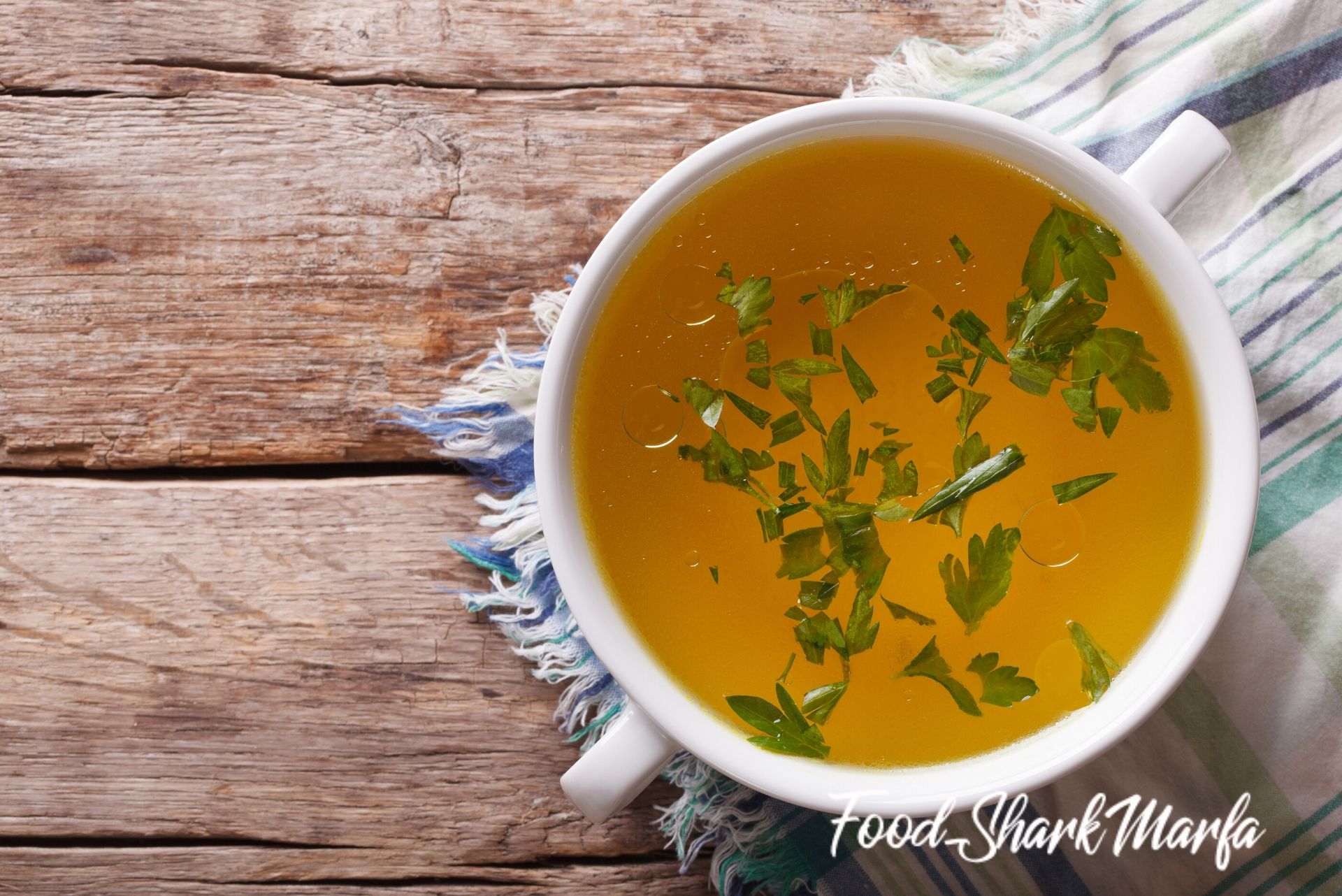 Just What is Beef Broth?

A beef broth is usually made from tougher cuts of beef, such as shank and sometimes bones, which are simmered for 3 to 24 hours with just water and seasoning, or more commonly now, with other ingredients such as onions and celery. As the broth simmers – it should not boil as this can make it very cloudy – the grease solids that accumulate on top of the broth are skimmed off.

Once ready, a traditional beef broth should be light brown in color and clear – or at most lightly clouded - with a mild beef taste. Suitable for consuming as is, beef broth can also be used in other soup recipes, gravies, sauces, casseroles and it is also useful for braising meat with.

Beef broth can be made at home and is suitable for bulk freezing, but as it does take time to cook it from scratch, most of us do prefer to buy it readymade from the store.

If you do want to have a go at making homemade beef broth, a good tip is to always keep the seasoning neutral during cooking, so you are left with a versatile broth suitable for using in many different ways. You will just need to add the right seasoning when you come to use it in your recipe.

What Is the Difference Between A Regular and A Condensed Beef Broth?

A condensed beef broth may also be known as a bouillon and this is usually in a dehydrated form, such as the cubes or powder you buy at the store. Bouillon is also the name given to the liquid that is created when the powder is rehydrated.

Is Beef Broth the Same as Beef Stock?

Although some chefs may disagree over the finer points of broth and stock, typically, a beef stock is made from bones and meat, while a beef broth is most commonly made with just tougher meat cuts.

Beef stock is usually made with veal bones that are first baked to open up the pores in the bones. These bones are then simmered with vegetables and seasonings for anything between 8 hours and two days, which allows the gelatin and nutrients to be released from the bones.

Once cooking is finished, it is all strained and the liquid left after straining is the beef stock. Beef stock has a mild beef flavor which can be used as a base for beef broth, consommé, soups, casseroles, gravies and more.

A beef base is a concentrated beef stock (like comparing a condensed beef broth to a regular beef broth) which is usually dark brown in color with a thicker consistency than stock.

Exactly What is Beef Consommé?

A beef consommé is a clarified beef broth that is meant to be served as a complete dish at a meal, usually as an appetizer. In fact, the word consommé means ‘completed’.

A consommé can be made from almost any type of meat, including of course beef, and it is always clear, thicker than broth and stock and has deeply concentrated and rich flavors.

As well as being served as is, beef consommé is used in other soup recipes, casseroles and side dishes. Consommé is also needed for aspic, savory jellies made with meat, seafood or eggs. 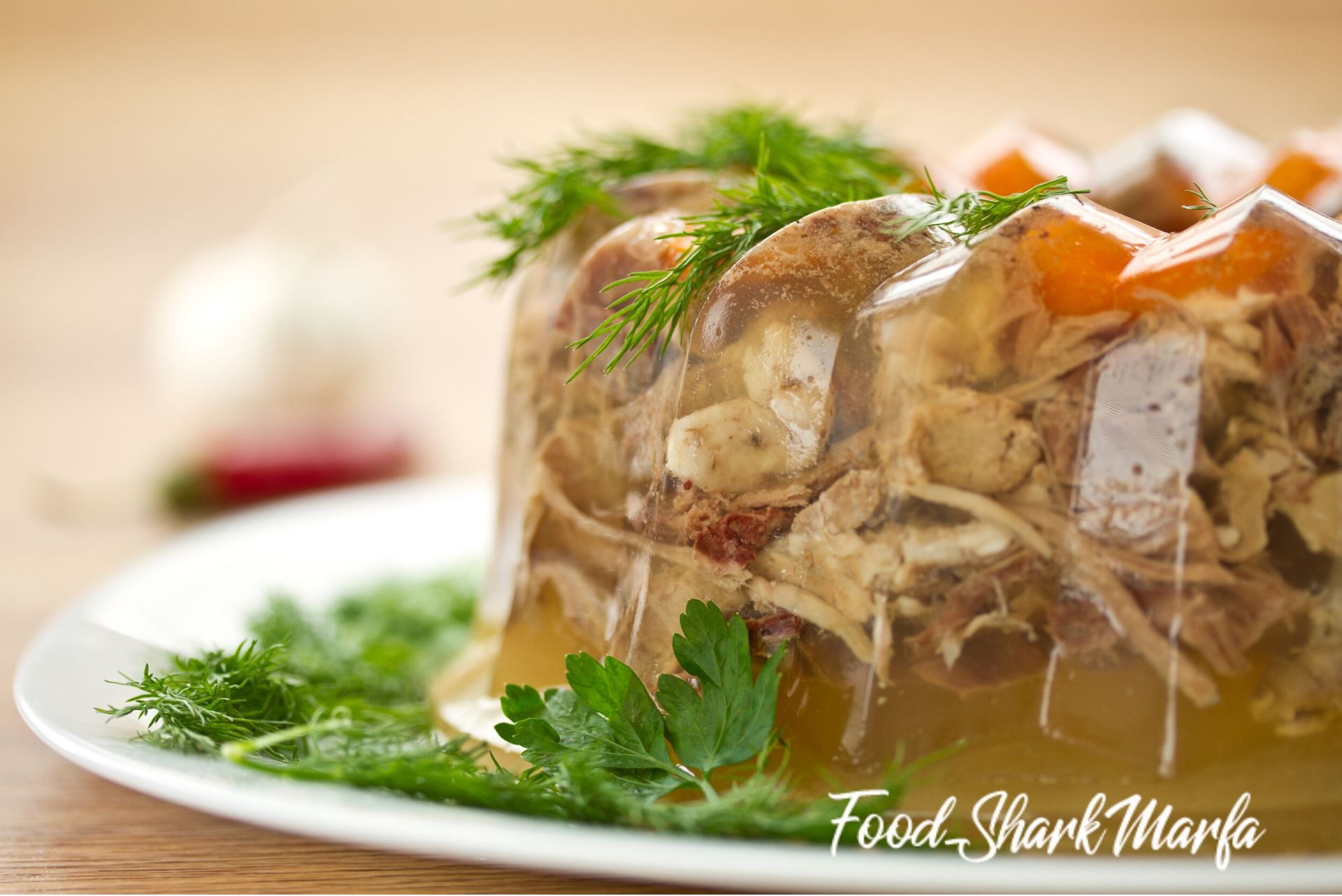 Beef consommé has a much stronger flavor than beef broth so if your recipe asks for beef broth – condensed or regular - you will need to slowly dilute consommé with water to reduce some of the beefiness.

Consommé is thought to have evolved in the Middle Ages, as a shift from the typical thick soups and pottages consumed by poorer people. Because consommé needed plenty of meat to make, it became popular with those who were rich.

At this time, consommé actually referred to the process rather than the finished dish and there was even a sweeter version of consommé in which preserved and dried fruits were added to a clear base made from gelatin – probably the earliest version of today’s jello!

Consommé kept its reputation as food for the wealthy for many centuries and during this time, consommés were created with specific names. One such consommé was Consommé Olga, made with scallops. This consommé was served as a First Class appetizer on the Titanic on the night before it sank in 1912.

As lifestyle and diets altered during the twentieth century, consommé as a dish began to disappear from kitchens and by the 1980s – along with the decline in formal dining – consommé had pretty much vanished from menus with the exception of a few select restaurants.

With some nutritionists focusing on the value of homemade bone broths, some people are starting to make broths at home once more. This means that consommé may also begin to re-emerge, not least because the taste from a good quality or homemade consommé is a long way from that of a can of beef broth. 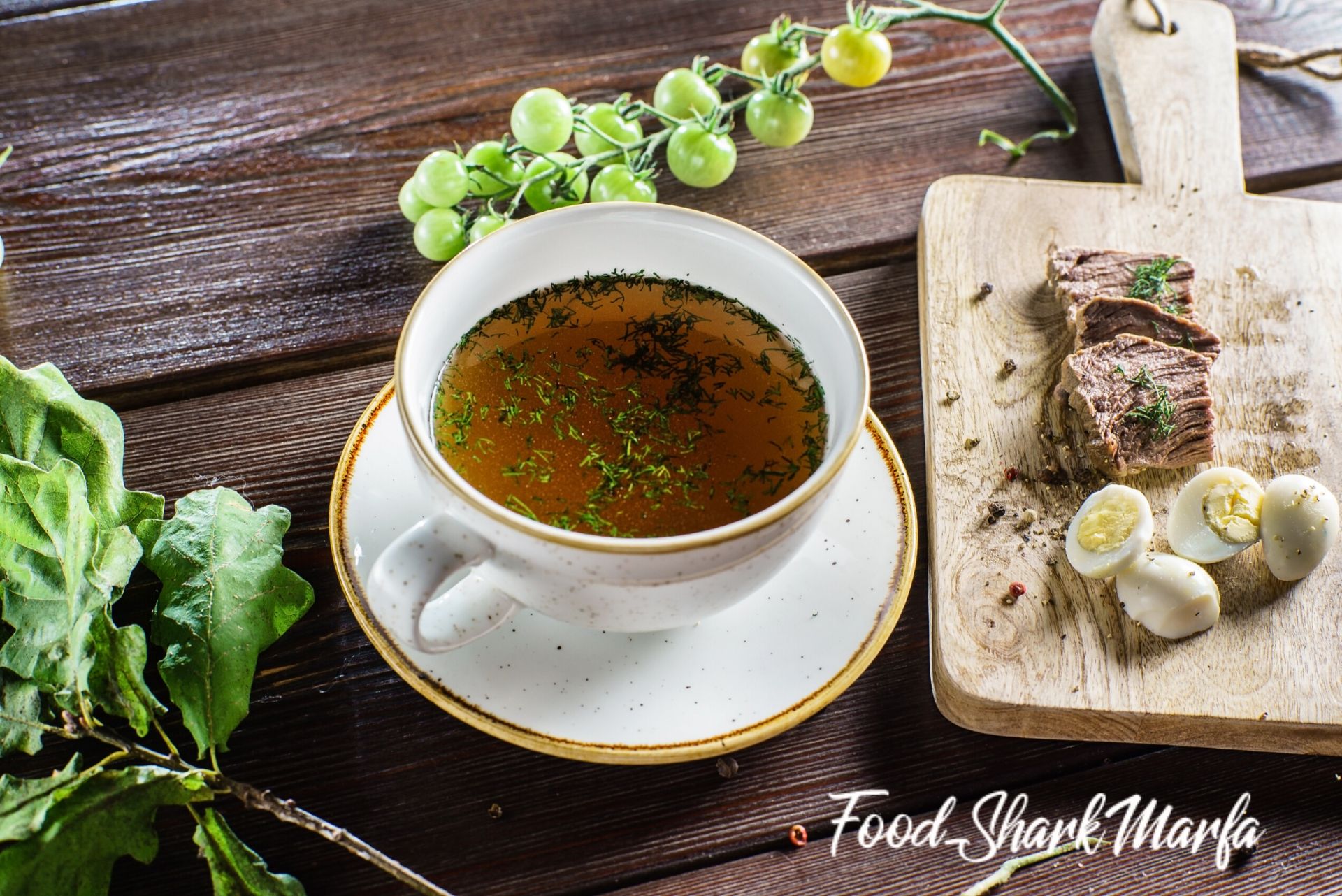 How Easy Is It to Make Beef Consommé?

Beef consommé can be made at home, but although it does not take too long to prepare the ingredients, the cooking and straining does take time.

A beef consommé is made from lean minced or ground beef, mirepoix (onion, celery and carrot), seasonings, chopped tomato, cold beef stock and whisked egg white. You can also use homemade or store bought beef broth in place of the beef stock.

The mixture is slowly heated until simmering – not boiling – and left for around an hour or so to give the egg whites the chance to draw out the protein and any impurities from the broth which otherwise make the liquid cloudy. This is also known as a clarification process. The action of the egg white causes an unpleasant looking foam to accumulate on the surface of the liquid.

Once the cooking time is complete, all the liquid from the pan needs to be slowly strained through cheesecloth. The clear consommé will run through the cheesecloth while the egg, vegetables, beef and seasonings are left behind in the cheesecloth.

As beef consommé is water and fat based, it can also be made in bulk and easily frozen in airtight containers for use at a later date.

Can I Use Beef Broth Instead of Beef Consommé in A Recipe?

If your recipe needs beef consommé, then you can make your own consommé from beef broth in the way explained above, but if you do not have the time to do this, then you are better using a condensed beef broth or even a bouillon.

Remember though that neither of these will provide the depth of beef flavor in a recipe that the consommé would.

Replacing beef consommé with broth or bouillon is not suitable in recipes such as aspic, but in stews, casseroles and most soups, clarity and consistency is not as much of an issue. 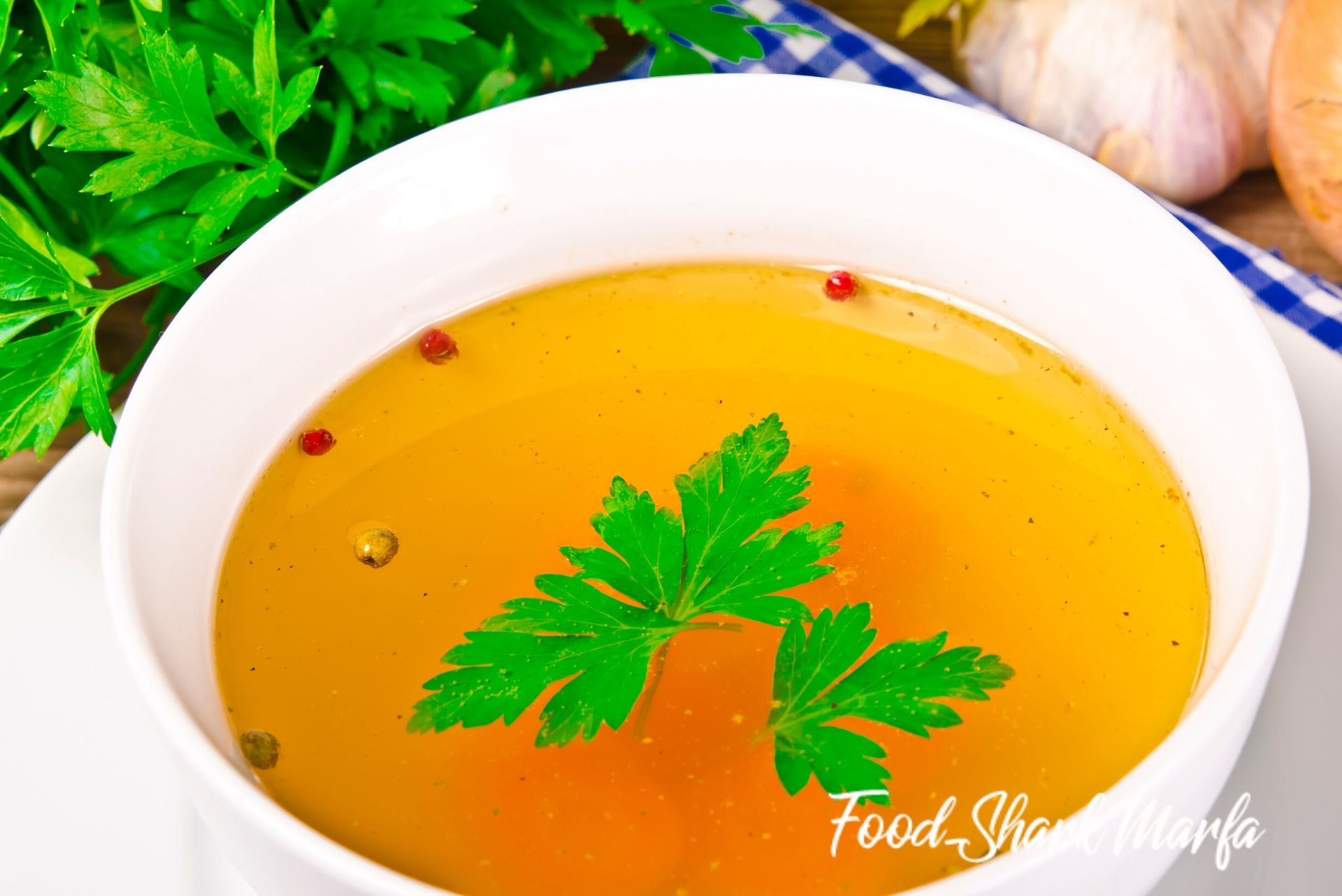 Beef Both vs Beef Consommé – The Take Home

In the beef broth vs consommé debate, we have seen that there are similarities in that they are both beef, but while beef broth is thin and has a mild beef flavor, the beef consommé is a thicker and clear clarified broth with a rich and intense beef flavor.

It is easier to use diluted consommé in place of a beef broth, but it is not as easy to replace consommé with broth as beef broth does not have the same depth of flavor or consistency as beef consommé.

The take home message is that it is probably easier to keep a can of each in your cupboard, or a stock of both in your freezer, so you know you always have the right one to hand for any recipe!